A January Walk Near My Backyard, A Lot Of History, Memories And Natural Beauty

A January Walk Near My Backyard, A Lot Of History, Memories And Natural Beauty 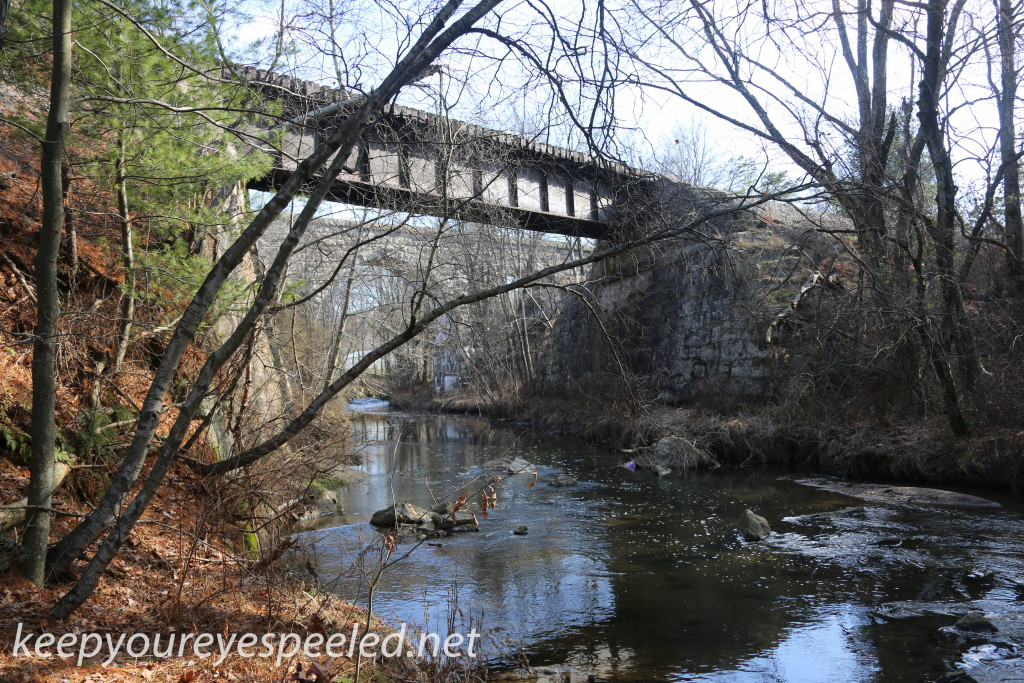 Happy New Year folks. It’s been a busy week and I  didn’t get a chance to get any posts up. Sorry. We got some more seasonably cold  weather here in Northeastern Pennsylvania these  past few days, and today, finally, some sunshine. 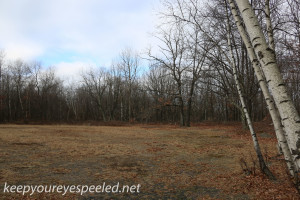 I walked out through some property I own, and love, remembering some of many good times I had growing up and exploring these rocky ridges.  We hiked up and down the many  huge rock outcrops, , naming them with names we still use today, and building forts, hideouts and whatever else comes to the minds of young boys. Today I checked some of the cave hoping to find the bear that visits my  backyard. . I know he’s still around from the neighbors complaints of shredded thrash bags and nasty droppings he leaves behind.  No luck finding him, and maybe it was a good thing I didn’t,  so I headed down off the ridge on a path I have been hiking for many years. 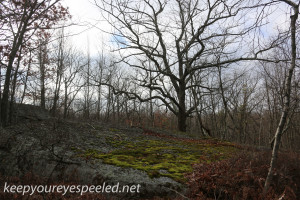 I crossed a small stream on my land which flows under  a huge leaning oak tree that we called the “coke sign’ tree since there was an old coca cola sign there when I was young. We would build campfires and play in the stream and my younger brothers and nephews also played and camped here, So many memories under this ancient oak. 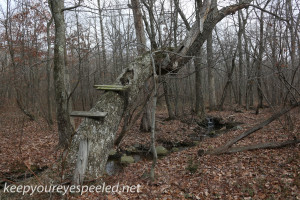 My property  ends near  the right of way of the old Hazleton to Wilkes-Barre electric railway or “third rail” as it was called. It later became an active feeder line of the Lehigh Valley railroad and we were always excited to hear the train coming up the tracks. The line  was closed around 30 years ago and the tracks removed a few year later. We spent many days walking those rails. All that remains is an eroded right of ways and many wonderful memories. 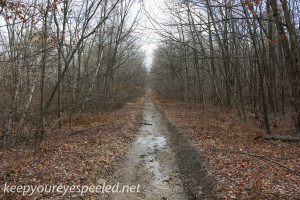 The right of way  proceeds under an old tower line on which we would spend many a summer morning picking blueberries  or, as we called them,  huckleberries. Just recently the old steel towers south of the right of way were removed and replaced with new steel poles. Another part of my past gone but again the memories remain. 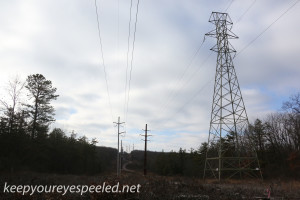 The “third rail” right of way proceeded into the Valmont Industrial park. This park was built near the lands of the old Atlas powder factory and I believe the first factory was built in the late 1950’s The area was a wetland and I remember picking “swampers” high bush blue berries and seeing turtles, racoons, snakes and frogs on the sight of the newer factories. 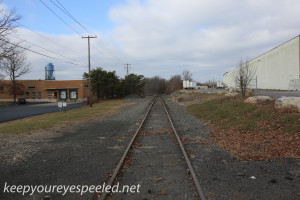 I walked out to the two  old bridges that span the Black Creek. We called them the ‘mile high” bridges since, to us kids, they sure seemed that high. The one over which the “third rail” crossed the Black Creek, the one further east, was built in around 1901,  The workmanship is remarkable. 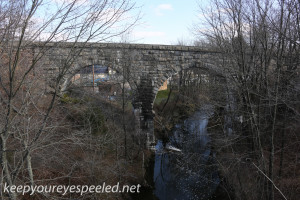 I hiked down to the Black Creek scaring a flock of mallard ducks in the process. I sat awhile along the creek, which a few years ago would have been most unpleasant. Most of the sewage, untreated , from the greater Hazleton area, was discharged here. The filth and smell were overwhelming.  A  sewage treatment plant was built in the 1960’s and today the creek was surprisingly clean and only had a mild odor of detergent used in the sewage treatment process. I took some photographs of this bridge and another bridge a bit to the west that also spanned the Black Creek. I am not sure which is older and hope to do some research which I will share in another blog post.   Here is a link to some more photographs of these two old bridges. https://keepyoureyespeeled.net/photographs-page-2/nggallery/photographs-page-two-blog/railroad-bridges-january-2-2016 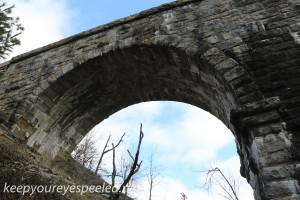 I crawled back up to the railroad track, now an active line servicing the industrial park and walked out a bit and again hiked down to the fast flowing waters of the Black Creek., walking beneath majestic hemlocks which were sparred the ax because of their proximity to the creek. I am sure that the waters of this creek were teeming with fish and water fowl when this ancient trees were but seedlings. 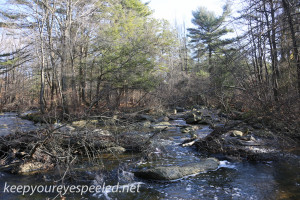 Although lifeless for many years, both from the discharge of sewage and acid mine drainage, a friend has said there are reports of fish returning to the creek. I sure hope they are true since it is still such a beautiful place and would be great for the fisherman to sit and relax. 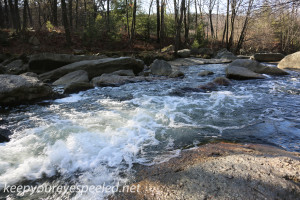 I then decided to find the inflow of what was once  Cranberry Creek, This Creek originated in south Hazleton and flowed near my house. Most of it’s waters now flow into the deep anthracite coal mines and drain through the famous Jeddo Tunnel into the Nescopeck Creek, polluting that once beautiful creek,  So today most of the waters entering the Black Creek here come form another beautiful waterway Stony Creek. Originating at a number of areas on Stony mountain and from the Humboldt Reservoir this stream still has native trout living in it’s water. 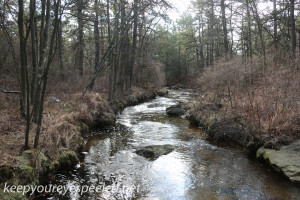 I tried to cross the rapidly flowing waters of the Black Creek, and would have done so easily in my younger days, but decided to hike back over the bridge and then proceed back down to the Cranberry/stony Creek. This was the first time I followed the creek from it’s inflow into the Black Creek and again the natural beauty of the creek amazed me. We were blessed with so much natural wonders and we  destroyed so much of it. I could only imagine what it looked like to the first settlers in the region. I hope they appreciated it and were just a little thankful for what they were given. 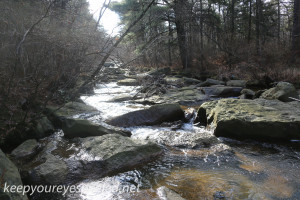 I made my way through the thick briars, thorn bushes and underbrush . You never know what you’re going to find in a hike in the woods and I  found the remains of these poor critter. 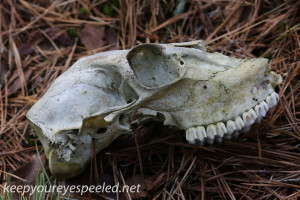 I walked up along the creek and came to these cables that cross the creek. It has been many years since I last crossed them. When we were kids we would balance ourselves as we crossed.  Many a time we hung on for dear life when our friends on the sides would pull on the cables trying to knock us off and into the water below. Luckily I never fell in, Good times they were. 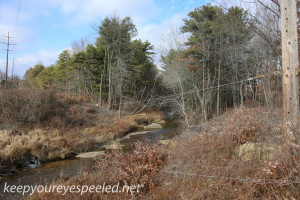 I finally hiked back up to the railroad tracks and made my way back toward West Hazleton, passing many places which have provided me with so many pleasant memories over the year,  including this popular.camping spot along the railroad right of way we called “Lipper’s Grove”. We spent many an underage night drinking beers out here. Sorry mom. 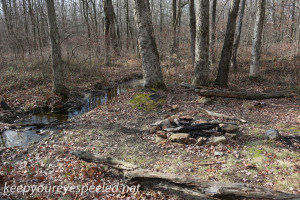 And so I made my way back to the  West Hazleton Babe Ruth field and up past my old high school and walked the streets back west to my house, as I had done on so many hikes in the past. It was another nice day to get out, exercise, observe and reflect on life, in northeastern Pennsylvania. Here is a link to some more photographs I took on my hike this morning. https://keepyoureyespeeled.net/photographs-page-2/nggallery/photographs-page-two-blog/railroad-and-black-creek-hike-january-2-2016 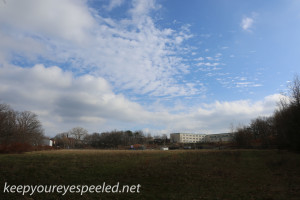 “These people have learned not from books, but in the fields, in the wood, on the river bank. Their teachers have been the birds themselves, when they sang to them, the sun when it left a glow of crimson behind it at setting, the very trees, and wild herbs.”
― Anton Chekhov 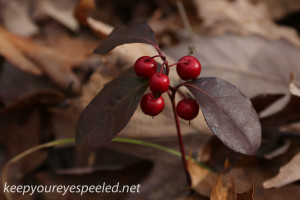