A Close Encounter With A Fawn At The PPL Wetlands

July 2, 2018 / fskokoski@gmail.com / Comments Off on A Close Encounter With A Fawn At The PPL Wetlands

A Close Encounter With A Fawn At The PPL Wetlands 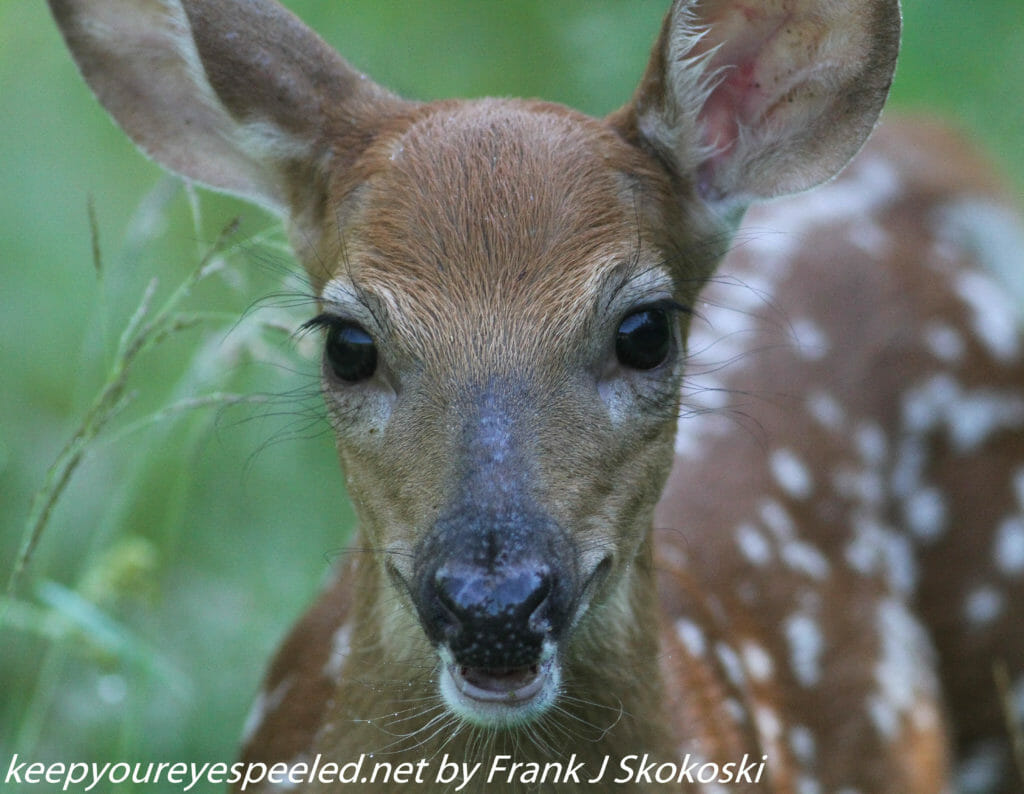 We finally had some Summer weather here in Northeastern Pennsylvania on Saturday.  Temperatures  climbed into the mid 80’s. I decided to walk in the PPL Wetlands in Salem Township  with my nephew Mikey. 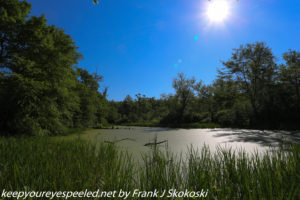 I usually hike alone, it makes it easier to see and photograph the local critters. However, my nephew Mikey, at 17 years old , like his dad and uncles, is already a seasoned outdoorsman. We were able to walk quietly under the shade of  the ancient trees growing in the wetlands. 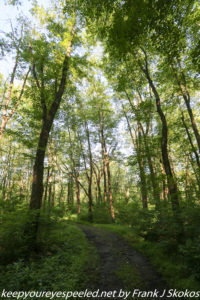 We were greeted by a pair of  phoebes at the start of the wetlands  trail. 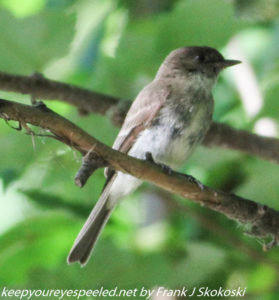 I am guessing there is a nest with some young ones nearby. 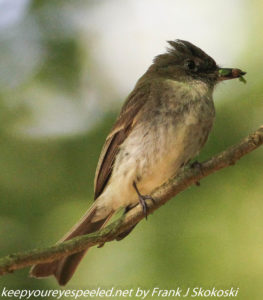 We were also soon  greeted by swarms of mosquitoes living in the duckweed covered waters. I am feeling the many itchy bites as I write this post. 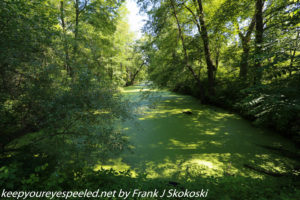 The trail have not been maintained and are now overgrown with grass. We constantly checked ourselves for ticks. Thankfully  not a tick on the entire hike. . 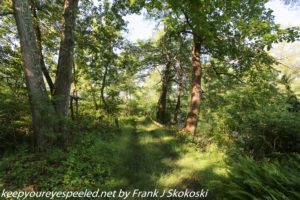 We heard a number of birds in the trees above, red- winged black birds, cardinals and warblers but it was hard to see, or photograph, them in the thick leaves of the trees.  I was able to photograph  this male, 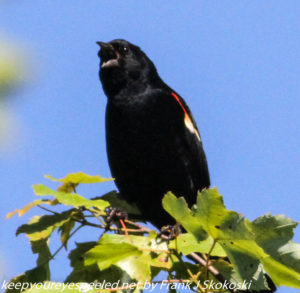 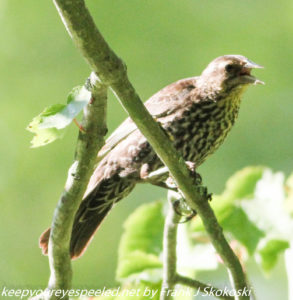 As we walked I heard what I thought was a Canada goose. It persisted and my nephew said it sounded more like a fawn bleating. 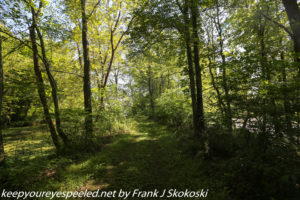 We walked toward the cries, and, as we approached, we were charged by this young fawn. 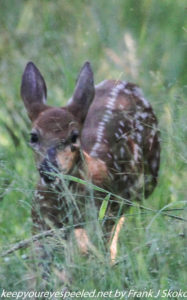 I only had my 400mm long lens and wide angle lens with me so, as I took photographs in the distance, I missed the fawn charging right into us! 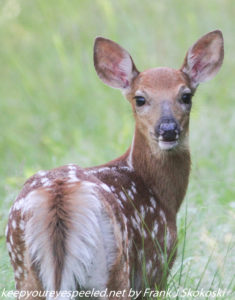 He stopped 4 feet away when he or she probably realized we weren’t mom and he or she wasn’t getting breakfast. 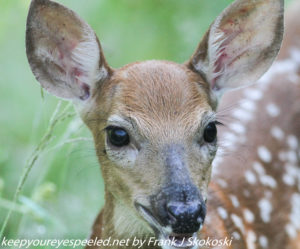 You could see it was hungry. We were concerned something happened to mom and it was on its own. However,  friends on social media assured us this is common. He or she was hungry and thought we were mom returning . Poor thing probably never saw a human before. It was surprised to see us but not scared. 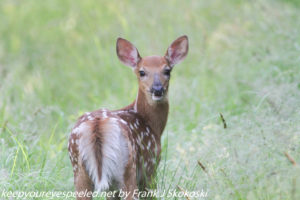 It eventually scampered into the shelter of the thick brush along the trail. It was another wonderful encounter with nature, which occurs on almost every walk in the wetlands. We continued our walk toward the river lands  section of the nature preserve. We saw a marsh wren  fluttering in the brush along the trail, 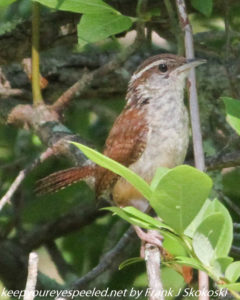 and another building a nest. 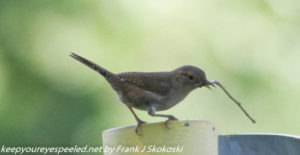 We walked out of the shade as we approached lake Took-A_While , and it was hot. We saw a blue heron, a kingfisher and an osprey but they  were too quick to capture with my camera. I was able to get a photograph of this Baltimore oriole. 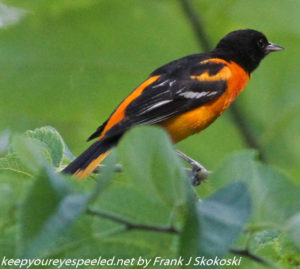 We had walked two miles and the heat and sun influenced our decision to end our hike.  It was getting very hot now.  The temperature was near 85 degrees.  There wasn’t a lot of wildlife activity. 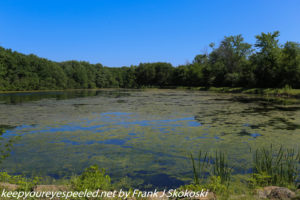 We did see these two turtles sitting in the hot sun. In the  Spring there are hundreds of them on the logs and rocks in the wetlands. Now, most of them  are  enjoying life in the warm, and safe waters of the ponds and canals in the wetlands. 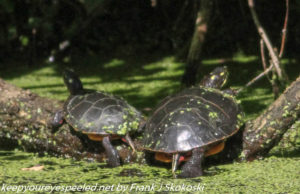 We saw a few more birds, including this song sparrow who didn’t let  the heat stop it from singing its song. Here is a link to some more photographs of  the birds I saw on our hike. PPL Wetlands birds June 30 2018. 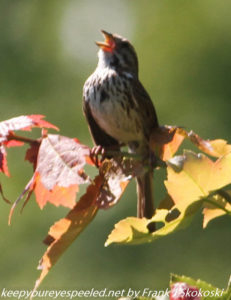 There weren’t as many mosquitoes on the return walk, but the wetlands were filled with dragonflies. I wish I had my macro lens since they are such delicate and beautiful creatures and I love to share their beauty. 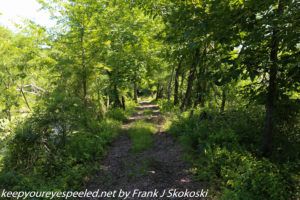 We were tried, hot and thirsty when we got back to the car. It was worth it.  Once again the PPL Wetlands provided us with another wonderful encounter with wildlife that lives here. Here is a link to some more photographs from our hike in the wetlands. PPL Wetlands June 30 2018. 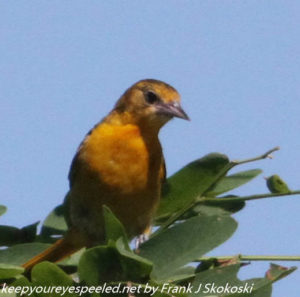 “Bambi was inspired, and said trembling, “There is Another who is over us all, over us and over Him.”
― Felix Salten, Bambi 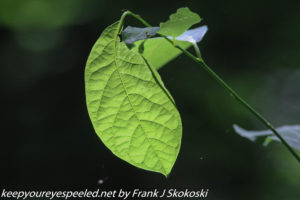