A Saturday In May At The PPL Wetlands. A Lot Happening This Time Of Year.

May 17, 2016 / fskokoski@gmail.com / Comments Off on A Saturday In May At The PPL Wetlands. A Lot Happening This Time Of Year.

A Saturday In May At The PPL Wetlands. A Lot Happening This Time Of Year. 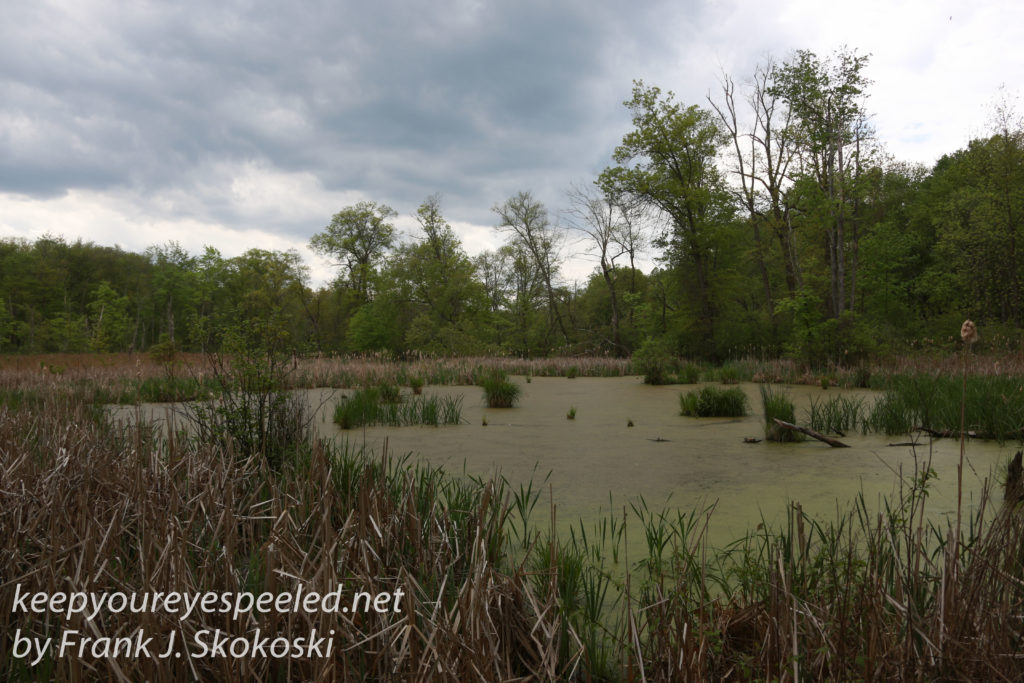 It was a beautiful morning this past Saturday here in Northeastern Pennsylvania. Unfortunately I had to be at the office early so got a late start  on my hike in the PPL Wetlands. But better late than never. Upon arriving, I found the wetlands were alive and now covered in the new, lush green growth of  Spring. And there was the heavenly aroma of honeysuckle in the air. What a splendid time of year. 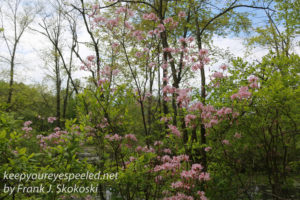 I have really become addicted to looking for and photographing the many beautiful species of birds that live in, and pass through ,  our area.   I am just seeing many for the first time through my camera and a 400mm lens. I  was hoping to find some on my walk and it didn’t take long for me to find this eastern phoebe, hopping from tree to tree. I located it’s  nearby  nest but didn’t want to disturb it. . 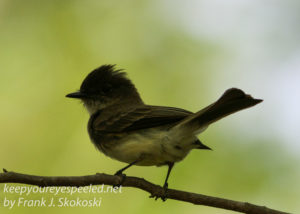 It was sheer joy walking  along the paths and trails next to the old  canals, ponds and wetlands. . So much has grown since  my visit a week ago.The mandrakes continue to bloom and some of the early ones are setting fruit already. 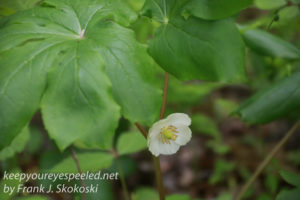 The ferns seemed to have shown the most growth seeming to have appeared out of nowhere. I love when they first appear and remember seeing many a young deer fawn hiding in their fronds near my house as a child. 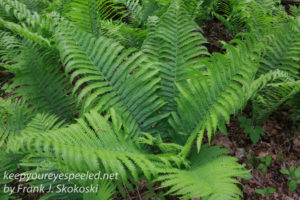 I did see a few deer hiding in the underbrush. I was only able to photograph this one looking back at me. I spooked her and about six others followed her as the ran through the thick brush and away from this annoying guy with his camera. 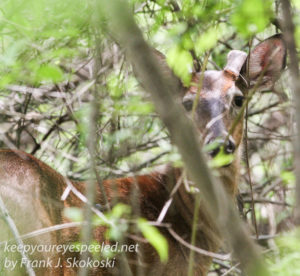 The skunk cabbage were full grown now and still a beautiful light green color. The will slowly start to deteriorate, disappearing by mid summer. 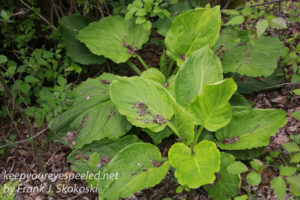 So much more to see, the fresh new leaves of  so many plants and trees, including the blueberry, blackberry, grape and these elderberry leaves,  that I  could right a short novel about every hike out here this time of year. 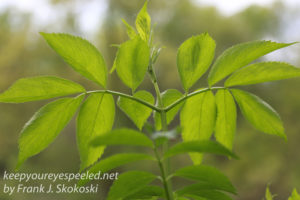 It was sunny early and there were many turtles taking advantage of the warm May sun lying on the rocks and logs along and in the ponds and wetlands and other just floating on the surface. . I love the way the just roll over an kerplunk into the water as I approach. 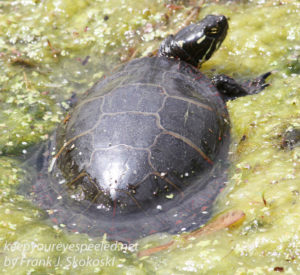 And there were birds too, so many of them filling the wetlands with their many beautiful songs.  The red winged blackbirds were probably the most plentiful. Flying from tree to tree and in the underbrush. And so many different., I believe this is a song sparrow but it is so hard to tell them apart. 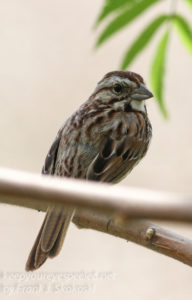 And there were also a lot of catbirds too. Almost as noisy and also very social and unafraid of my presence. 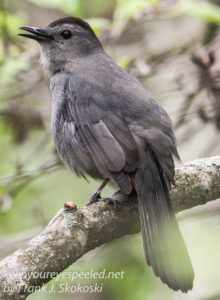 I left the wetlands and hiked over to the riverlands, where there is more open fields and encountered many more birds including the always beautiful yellow warblers. 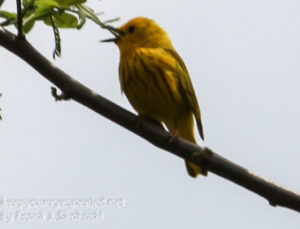 I also was able to see and photograph a few new birds. I was only able to identify them when I returned home with the help of my field guides and my new friends at the local Luzerne County Birding Facebook page. This is a red eyed vireo. Here is a link to a few more photographs of this graceful bird. https://keepyoureyespeeled.net/birds-of-pennsylvania/nggallery/birds-of-pennsylvania/red-eyed-vireo 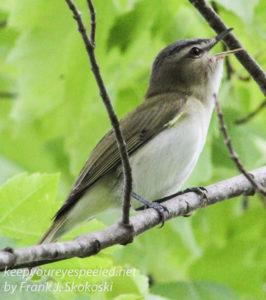 And this was my first sighting of the american redstart. This is the male  perched in a tree. 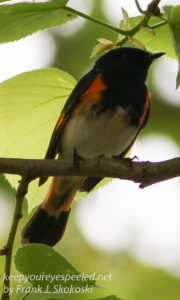 And here is the female. It is so hard to distinguish not only the different species but also the male and female of the same species. 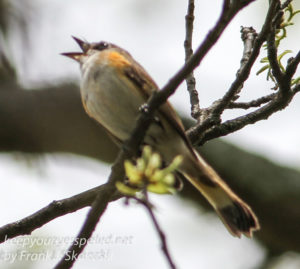 I saw more phobe, cardinals, robins and these beautiful baltimore orioles, this one perched in a tree, eating apple blossoms and engaging in the most beautiful singing. 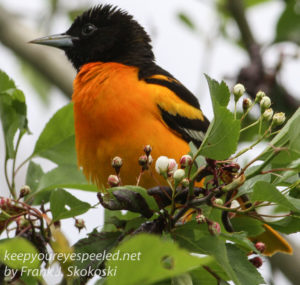 I think this is a juvenile baltimore orioles that just left the nest. 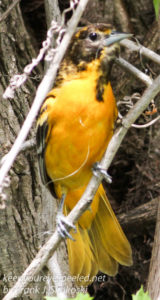 Here is the nest I found in a nearby tree. 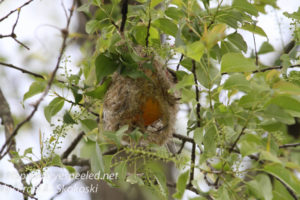 I headed back to the wetlands and continued to see many birds and listened to their many songs creating a very pleasing concert. I also heard many a frog croaking in the ponds and wetlands and managed to get a photograph or tow of this elusive creatures. 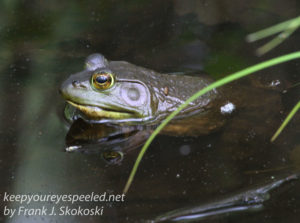 And, as I was walking, I looked down and almost stepped on this fellow who was sitting on the path and enjoying a recent meal, probably one of the frogs I just photographed. 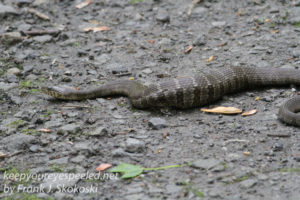 A cold front was moving in and rain was predicted so I headed back to my car. On my way I encountered a pair of these beautiful birds, the cedar waxwings. So much to see this time of year. Here is a link to a few more of the critters I saw in the wetlands on Saturday. https://keepyoureyespeeled.net/photographs-page-2/nggallery/photographs-page-two-blog/ppl-wetlands-critters-may-14-2016 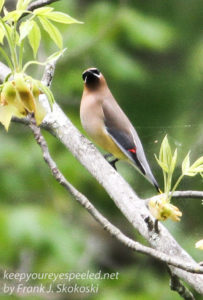 I arrived at my car and was having a hard time deciding if I should stay and looks for some more birds and other critters. The threat of rain, and my empty stomach helped me with my decision. I headed home  and got home just as the rain arrived.  But you know I would return. Especially this  time of year. Here is a link to some more photographs from my hike. https://keepyoureyespeeled.net/photographs-page-2/nggallery/photographs-page-two-blog/ppl-wetlands-may-14-2016 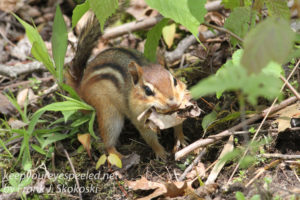 “The earth has music for those who listen.”
― 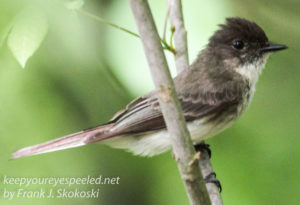