A Strenuous Hike, But The “Grandview” Of Pittsburgh Was Worth It

May 25, 2021 / fskokoski@gmail.com / Comments Off on A Strenuous Hike, But The “Grandview” Of Pittsburgh Was Worth It

A Strenuous Hike, But The “Grandview” Of Pittsburgh Was Worth It 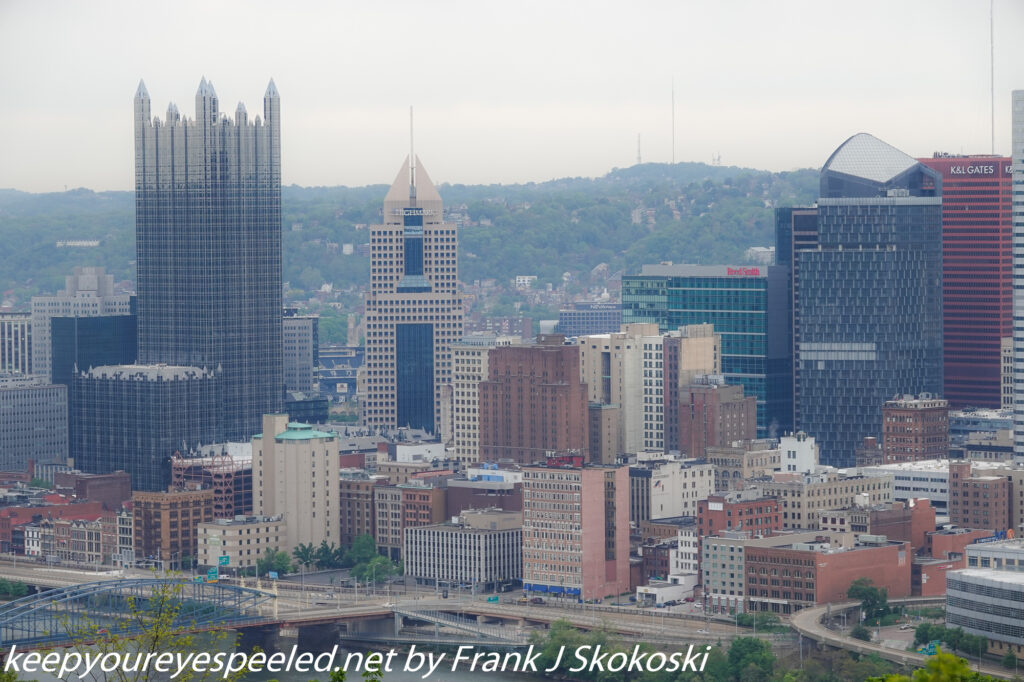 It was overcast and threatening rain when I awoke in Pittsburgh  early Sunday morning. As I mentioned in my previous blog post,  I was in the city  to celebrate my niece Cassidy’s graduation from Duquesne Law School.  I decided to combine a nature hike with a view of the city. Looking at the maps of the city I found the Grandview Overlook. And through my research of the city I learned of the Emerald View  Park and some hiking trails that were  situated on the side of Mount Washington. So that’s were was I was headed. 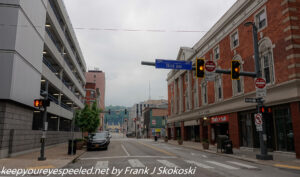 I left my hotel and proceeded down Smithfield Street. The was no motor vehicle traffic at 7 a.m. on a Sunday morning. And very few people. I enjoy roaming cities early in the morning and watching them come to life.  But they are not coming to life early on a Sunday. 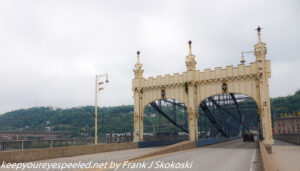 In about a half mile I was crossing the Monongahela River on the historic  Smithfield Street Bridge  which was built in 1883. 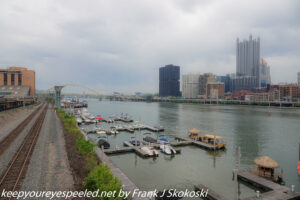 As I crossed the river  I enjoyed   views of  the skyline of downtown Pittsburgh. In less than a mile from here,   the Monongahela River confluences with the Allegheny River and creates the Ohio River. And of courses the historic Ohio River flows into the mighty Mississippi River. You quickly grasp the strategic importance of Pittsburgh in the development of our Nation. 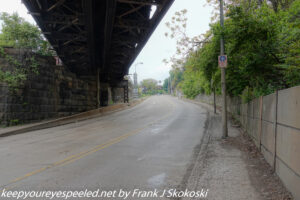 Leaving the river I begin my climb to the top of Mount Washington. At first I walked up steep streets through abandoned commercial areas.  It wasn’t the best place to be walking alone, and I don’t think I’d walk here at night. As I climbed the streets, I was occasionally treated to views of the city, and the residences of some of the cities homeless. 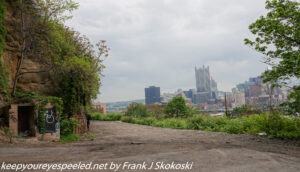 In about another half mile uphill climb I found the entrance to the Emerald View Trail. It was a narrow trail that took me  through a dense  forest. It was nice to find this piece of nature  so close to the center of the city 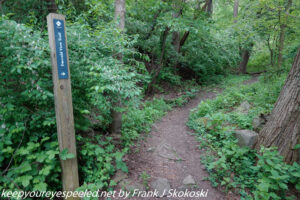 The steep wooded trail that wound it’s way up the hillside. The sounds of birds filled the air.  Unfortunately  they were well hidden in the thick new leaves of the trees and shrubs. And, since I didn’t have a lot of time to look for them, I wasn’t able  to photograph  many .  However, I was able to capture a photo  this male cardinal. 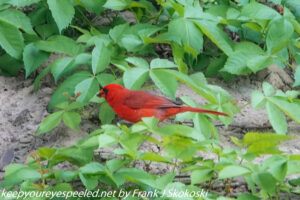 My niece’s graduation ceremony began a 11 a.m. Due to the COVID-19 pandemic I couldn’t attend in person  but I planned to watch it live on the internet in my hotel room. So I hastily, as my tired legs would carry me, continued my hike up the steep trail . 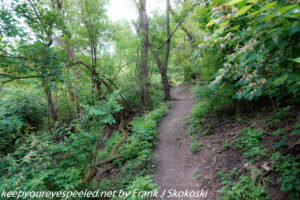 Along the way, in addition to the birds singing, another sign of Spring was everywhere. The heavenly aroma of the honeysuckle flowers growing along the trail. 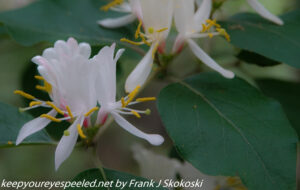 As I neared the top I was able to see some views of the city now far below me. This is looking north and west of the downtown , and,  I believe the 10th Street Bridge. 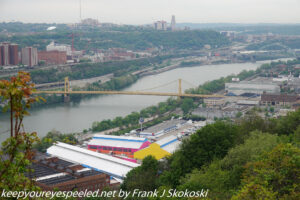 The trail soon neared the top of Mount Washington and I came to the first street, and homes  atop the hill, I think it was Williams  Street. 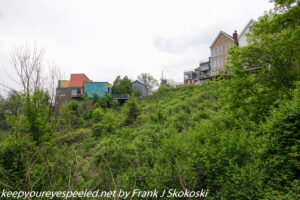 I next came to Bigbee Street and then Bailey’s Avenue. 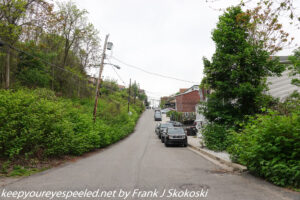 There were a variety of homes on the hilltop overlooking the city. Some were old, some new, some modest and others lavish. The neighborhood once housed poor immigrants living in the city, but, from the expensive cars in most of the driveways, much more affluent folks live here now. 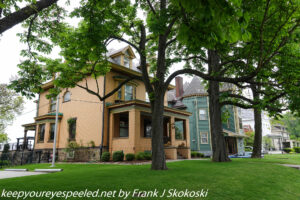 I walked through the quite and pleasant neighborhood of  well kept home and gardens and came to Grandview Overlook Park .Once a neighborhood park that was not maintained it has recently been reclaimed and provides impress views of the city below. 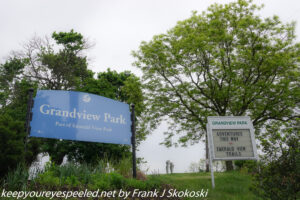 and then started me return hike back down the 450 feet elevation of Mount Washington. I began my hike on the wooded trail of Emerald Park and this time found of critters along the way. First I saw this inquisitive squirrel along the trail. It stopped  to take a look at me. 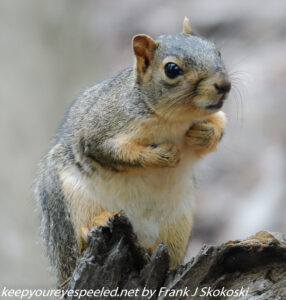 Further down the trail I came upon the female white tail deer. She , too, stopped to take a look at me. 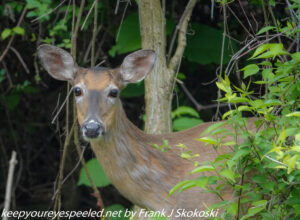 As I watched her gingerly walk in the woods I came to realize she was pregnant. She almost seemed to know I knew of her condition as she watched me watch her. It was a pretty interesting experience to get this close to a deer in big city like Pittsburgh. 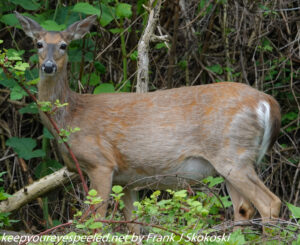 Leaving soon to be mommy deer I continued  my hike down the hillside and came to a road which continued my descent to the city below.

Some  of  the homes in  this neighborhood were not as nice on the top of the mountain. 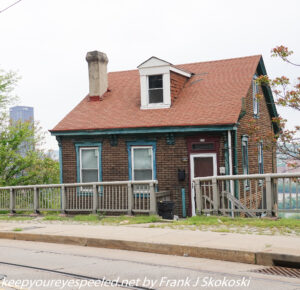 When I came to this old concrete stairway  decided to follow it down the hillside. . 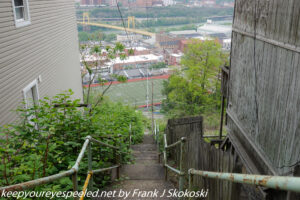 It was a steep one , and was showing signs of decay. It probably wasn’t a wise decision to walk down it and  I  certainly wouldn’t want to walk or run back up. It was steep! 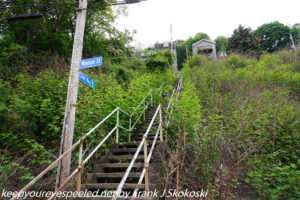 I re-orientated myself at the bottom of the steep and long stairway. I decided to hike across Liberty Bridge back into the city. So I followed a street downward and made it to the bridge and tunnel after which it was named, and found it closed to pedestrian traffic. 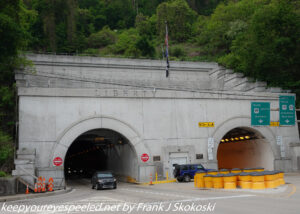 So I walked back to the Smithfield bridge and crossed over the Monongahela River on the northern side of the bridge. . 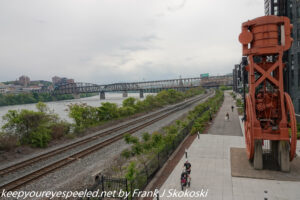 On the other side I walked along the river and found a few birds in the trees, including this song sparrow, 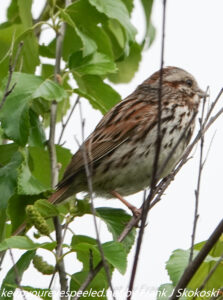 and robin, both singing on the cloudy cool May morning. 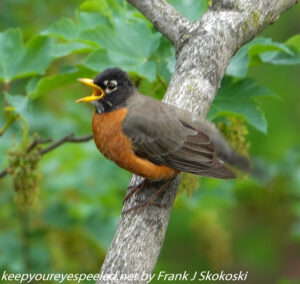 It was around 10:00 a.m. when I finished my five mile hike. I was tired but enjoyed my hike to the top of Mount Washington and the Grandview Overlook. .. I had just enough time to enjoy a much deserved, and delicious breakfast, at the hotel and get showered in time to watch my niece Cassidy’s graduation  on YouTube.. It was a wonderful and moving ceremony. Congratulations Cassidy!!!   Here is a link to a gallery with some more photographs from my hike to the Grandview Overlook. Pittsburgh morning hike May 16 2021. 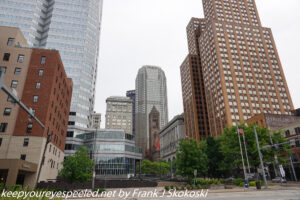 Each neighborhood of the city appeared to be made of a different substance, each seemed to have a different air pressure, a different psychic weight: the bright lights and shuttered shops, the housing projects and luxury hotels, the fire escapes and city parks. – Teju Cole