A Walk In The PPL Wetlands: The Cool Weather Can’t Stop The Arrival Of Spring.

April 3, 2016 / fskokoski@gmail.com / Comments Off on A Walk In The PPL Wetlands: The Cool Weather Can’t Stop The Arrival Of Spring.

A Walk In The PPL Wetlands: The Cool Weather Can’t Stop The Arrival Of Spring. 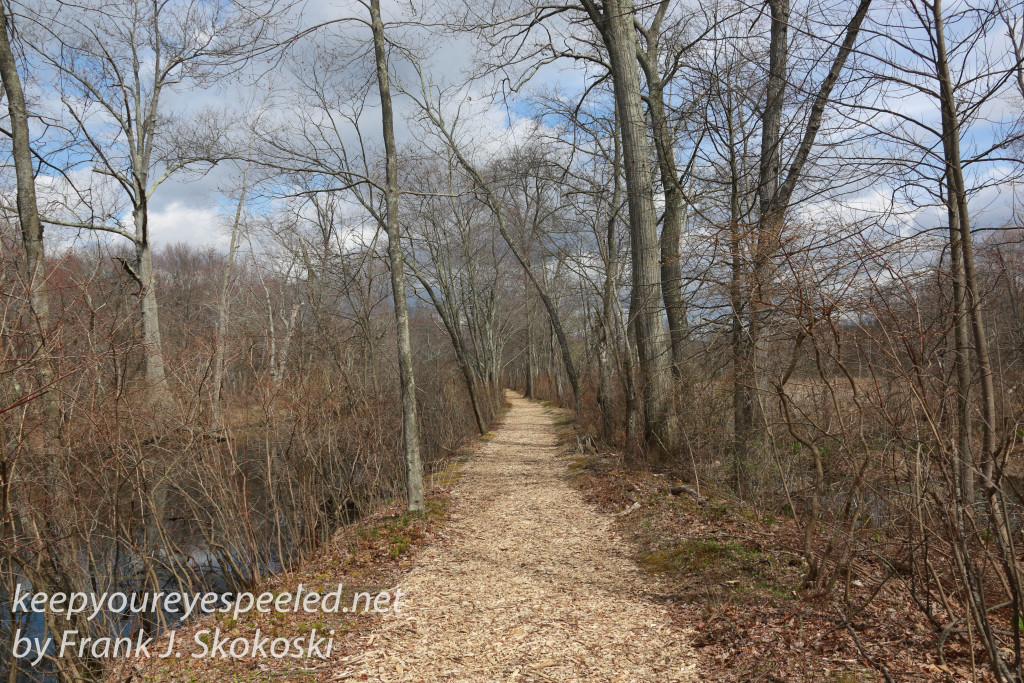 The weather got cooler yesterday  morning in Northeastern Pennsylvania. And got  even colder today, there is an inch os snow on the ground as I type, . But the weather can’t stop nature from it annual Spring thing. My walk in the PPL Wetlands yesterday proved that. 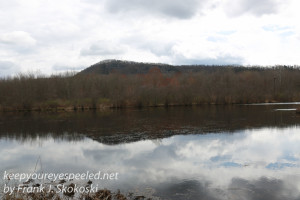 I started my walk with some light rain falling.  I immediately noticed that there was a lot more green in the woods and  some of the trees where now showing young buds, including  the  witch hazel, shown here. 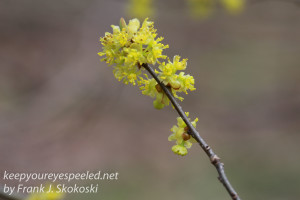 The partridge berries, may flowers, skunk cabbages  and many other plants were bursting forth from the dead litter of last years fallen leaves. The trout lilies are just about ready to burst into bloom. 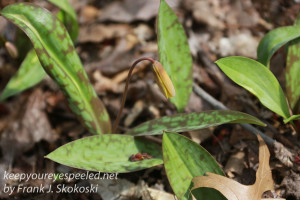 There wasn’t as much wildlife  activity as last week but there still were some critters stirring including about. I ran into that same herd of deer I spooked last week and did again this morning. Once again they were too quick for my camera.  The Spring peepers were much louder now and I enjoyed their  chorus throughout my entire walk. I scared a few geese and ducks on the water including this pair, which  I think are blue winged teals. 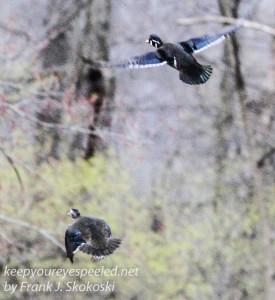 I left the wetlands  and headed to the lakes and ponds at the PPL Riverlands.  There was a break in the clouds and we got some sun. The turtles didn’t take long to take advantage of the sunshine and quicker climbed atop the rocks and logs to baste in the sunshine. 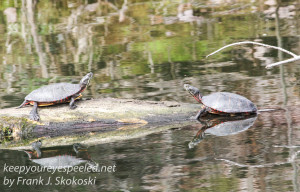 I saw a number of cormorants on the lakes. These birds scare easily, and when disturbed fly in a straight line just above the water. 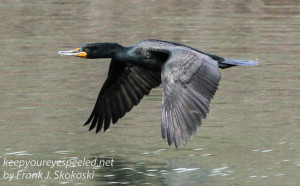 There weren’t as many birds flying about like last week but I still saw a few birds on my walk back to the wetlands, including robins, flycatchers, red winged blackbirds, sparrows, crows and this  flycatcher which I think is a phoebe, who looks like was in the process of building a nest. 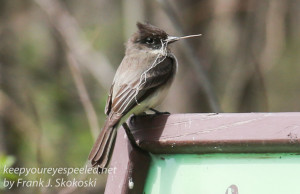 I came upon a painted turtle along the path and  intruded upon his/her journey to gets some photographs. It amazing how complex this simple creature is when examined closely. 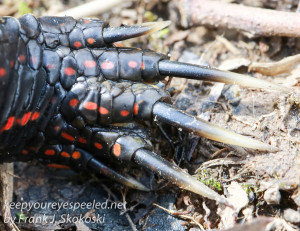 They will be leaving the water now to mate and then the females will deposit her eggs in the soft soil along the banks of the ponds and canals.  Here is a link to some more photographs of this beautiful turtle. https://keepyoureyespeeled.net/photographs-page-2/nggallery/photographs-page-two-blog/ppl-wetlands-painted-turtle-april-2-2016

I spotted a much larger cousin of the painted turtle lurking in the waters off one of the  long abandoned canals, a snapping turtle. 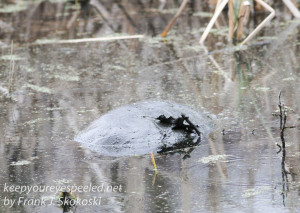 As I walked in one of the cattail swamps in the wetlands I came upon this poor critter, I think it is a star nosed mole. I never saw one before so I took some close up photographs of this poor dead and strange creature. 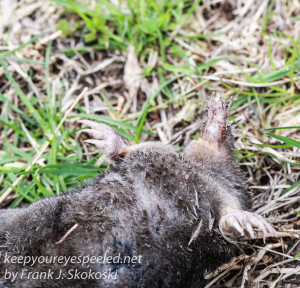 I was curious as to what caused his death and, as I continued my walk I came upon another dead star nosed mole about fifty yards away. I wonder what caused their deaths and any comments would be appreciated.  Here is a link to some more photographs I took of these poor dead moles. https://keepyoureyespeeled.net/photograph 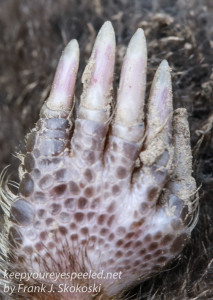 I walked  the canals one last time, hoping to see some more wildlife, but like I said it was quiet and didn’t see any critters but I did find this, highbush blueberry (or swamper  as we call them)  ready to set forth flower buds. It won’t be long until the flowers are in full bloom and I will be sharing the delicious blueberries which usually ripen in mid ripen in mid July. 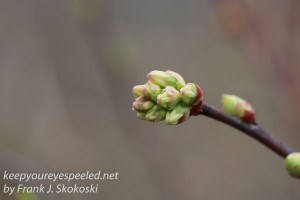 Well I know for sure, between now and then, I will make a lot  more new discoveries in the PPL Wetlands as I watch the Spring continue to slowly advance. The snow and cold can’t last long now. The sun will continue to do it’s job, warming the earth, and bringing about forth a new world of green in the next few weeks.  I love it down here. Here is a link to some more photographs I took at the PPL Wetlands yesterday.  https://keepyoureyespeeled.net/photographs-page-2/nggallery/photographs-page-two-blog/ppl-wetlands-april-2-2016 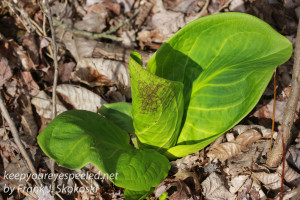 “Come with me into the woods where spring is advancing, as it does, no matter what,not being singular or particular, but one 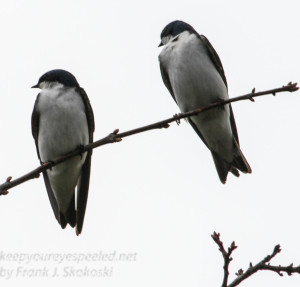 of the forever gifts, and certainly visible.”
― Mary Oliver