A Walk In The Susquehanna Wetlands: A Different Name But The Same Natural Beauty

April 7, 2021 / fskokoski@gmail.com / Comments Off on A Walk In The Susquehanna Wetlands: A Different Name But The Same Natural Beauty

A Walk In The Susquehanna Wetlands: A Different Name But The Same Natural Beauty 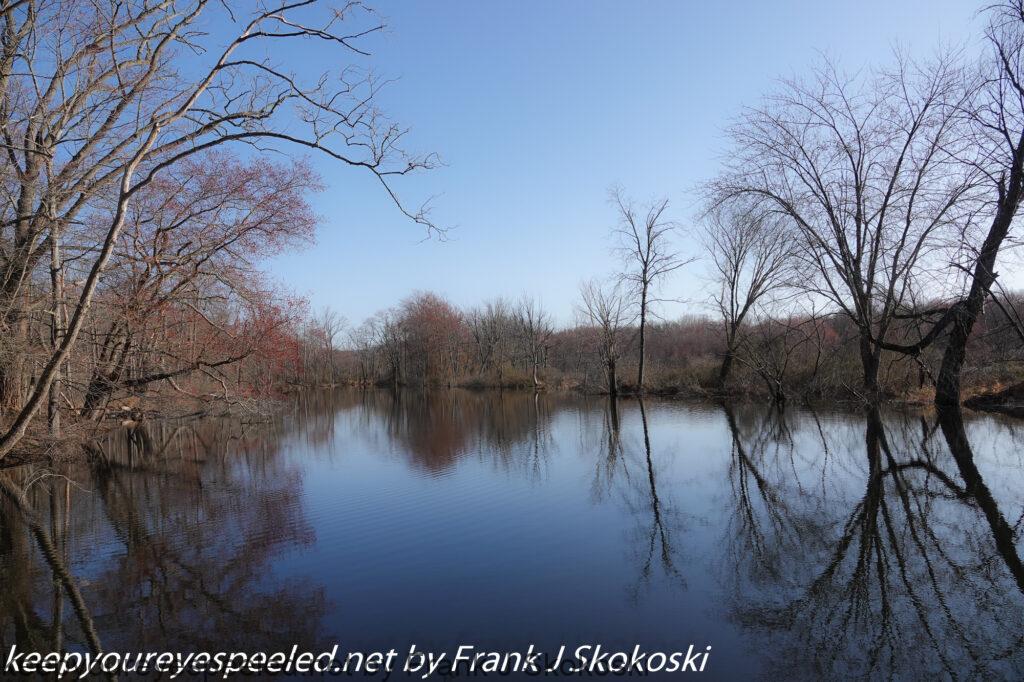 Many of you who  have followed my blog the past 6 years have seen posts from the PPL Wetlands and River Lands.  Located along the Susquehanna River in Salem Township, Luzerne  County this nature preserve was created by the PPL Electric Corporation adjacent to it’s nuclear power plant. It preserved the wetlands created by the remains of the old Susquehanna Canal. The ponds, canals and small lakes provided a home for a variety of wildlife.  It is a place I have come to love. 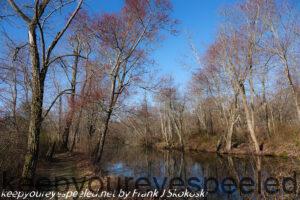 Well,  a few years ago PPL Electric sold the nuclear plant and the adjacent wetlands. Many folks started referring to the preserve as the Susquehanna Wetlands. Me, being one who dislikes change,  continued to call them by their former name. However, it is time, and  I will now call them by the generally accepted Susquehanna Wetlands and River Lands.  I was at  the wetlands again last Saturday, after a frigid night. Temperatures dipped into the low 20’s and were near freezing when I arrived.

There were no spring peeper frogs peeping or turtles  basking in the early morning sun. It was too cold for them, in fact a heavy frost was on the ground and ice formed on some of the ponds. 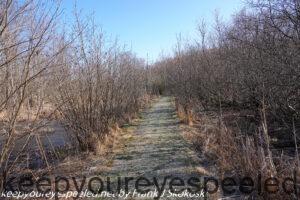 However, the cold didn’t stop the newly arrived red-winged blackbirds from singing their raspy songs. Perched in the trees tops there harsh calls echoed through the wetlands. 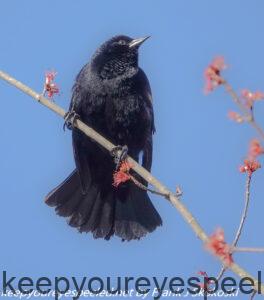 It is easy to see why they are named red-winged blackbirds when you see them in flight. 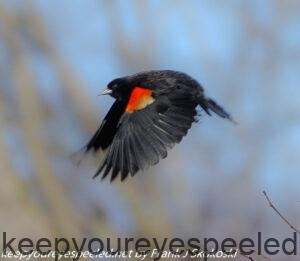 Walking along the canals I scared off dozens of wood ducks. I tried my best to sneak up on them and capture a photo of their beautiful profiles but they would fly off as I approached, 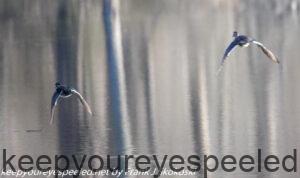 I was surprised to come upon this pair of blue-winged teals swimming on a canal in the wetlands. The breed in the interior of northern Canada and have a long way to go on their journey. I was wondering if it was the same pair I saw last week.

Despite the cold there were some new signs of Spring. The  canes of the blackberry shrubs were sprouting their first leaves. 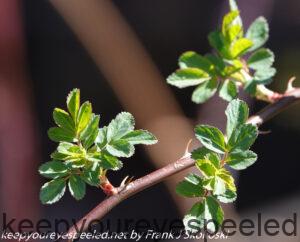 The garlic mustard was spreading  its green leaves on the trails  throughout the wetlands and river lands. 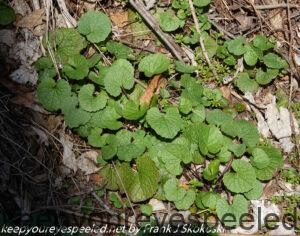 The skunk cabbage continued to grow and unfurl their  leaves. 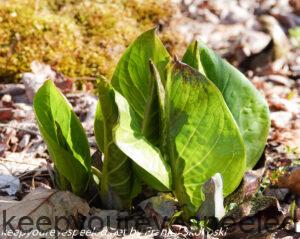 And  the bitter dock leaves were  now making an appearance. 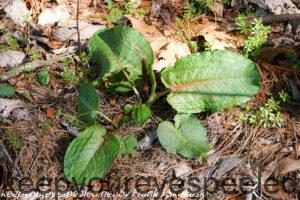 There were some of the usual birds in the trees along the trail in the wetlands, including this woodpecker, which again, I think is a downy woodpecker,

and a few black- 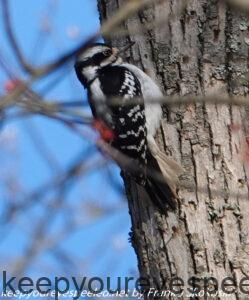 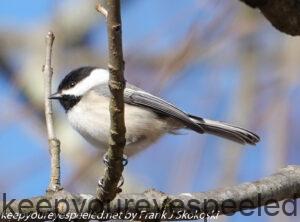 I kept a lookout for beavers and muskrats as I walked past their lodges and dens in  the wetlands. And once again I didn’t see any of these critters on this cold morning. 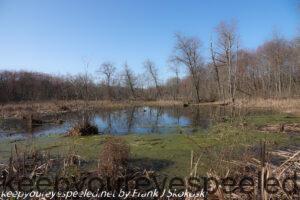 There was a  juvenile bald eagle  perched in a tree. However, I was only able to capture a photo of its tail feathers as it quickly flew away. 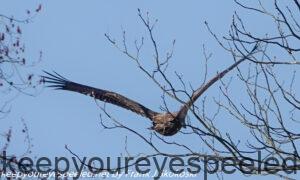 I next took a side trail to the Susquehanna River where I hoped to see the kingfisher, wood ducks and hooded mergansers that I observed here the past few weeks. There was nothing but the slow flowing water of the river moving on Saturday morning. 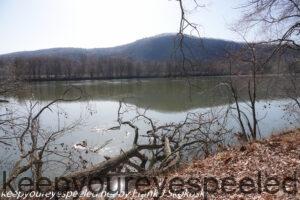 Walking back to the trail I spent a few minutes watching a couple golden crowned kinglets hopping on the branches of a tree above the trees. They seldom remain stay for long and this was the best photo I was able to take of this pretty bird. 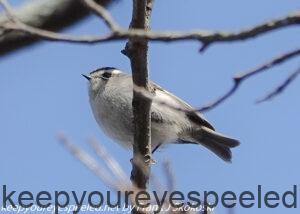 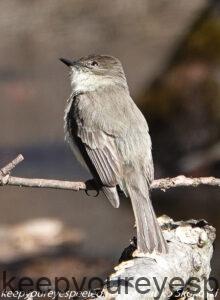 and a small flock of song  sparrows feeding on the ground. 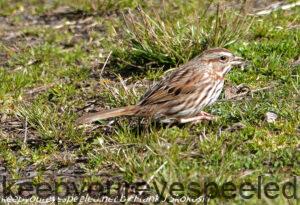 This pair of nesting Canada geese thought they were hidden as I walked by their nesting area. There were a few nesting pairs being quiet in the wetlands as I walked past. A few weeks ago they would honk loudly, defending the nesting areas. Now that the eggs are laid the sit quietly protecting their nest.

I crossed the paved access road  and entered the river lands area of the nature preserve. 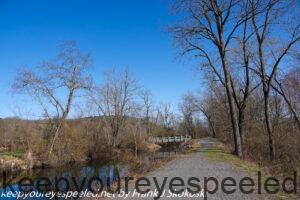 I found  only a few fishermen on the shores of Lake Took-A-While because of the frigid temperatures. 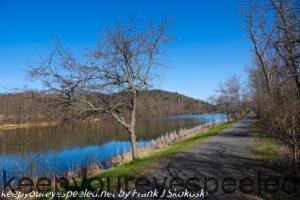 The bright  and strengthening April sunshine was warming it up as I walked to the far end of the lake. 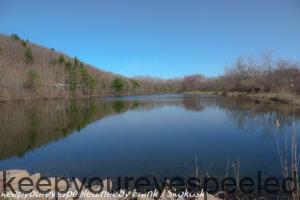 The only wildlife I saw on my walk along the lake were  robins, some double-breasted cormorants on the lake,

and a small flock of dark-eyed juncos. 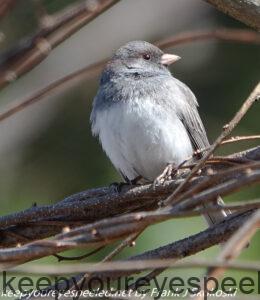 It is about 2 1/2 miles from the wetlands to far side of Lake Took-A- While, 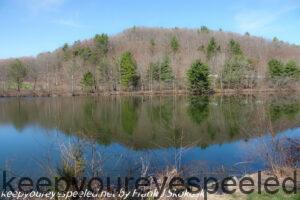 including a few side trails.  This is where I usually end my hike and began my walk  back  to the wetlands. 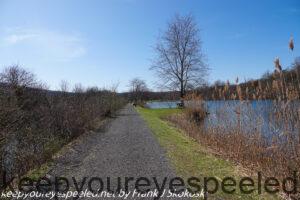 I didn’t see much more wildlife activity but,  in the wetlands, even though the air was still cool, the bright sunshine encouraged a few painted turtles to crawl up onto some rocks and logs along the canals. 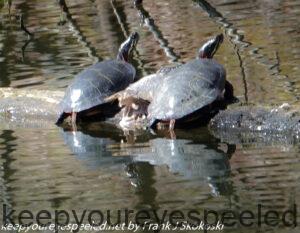 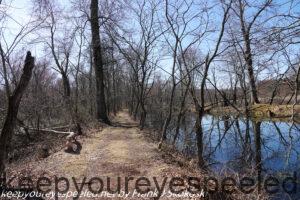 “What’s in a name? That which we call a rose. By any other name would smell as sweet.” William Shakespeare