A Weekend Of Swamps, Soldiers And Summer Weather In Northeastern Pennsylvania

July 11, 2016 / fskokoski@gmail.com / Comments Off on A Weekend Of Swamps, Soldiers And Summer Weather In Northeastern Pennsylvania

A Weekend Of Swamps, Soldiers And Summer Weather In Northeastern Pennsylvania 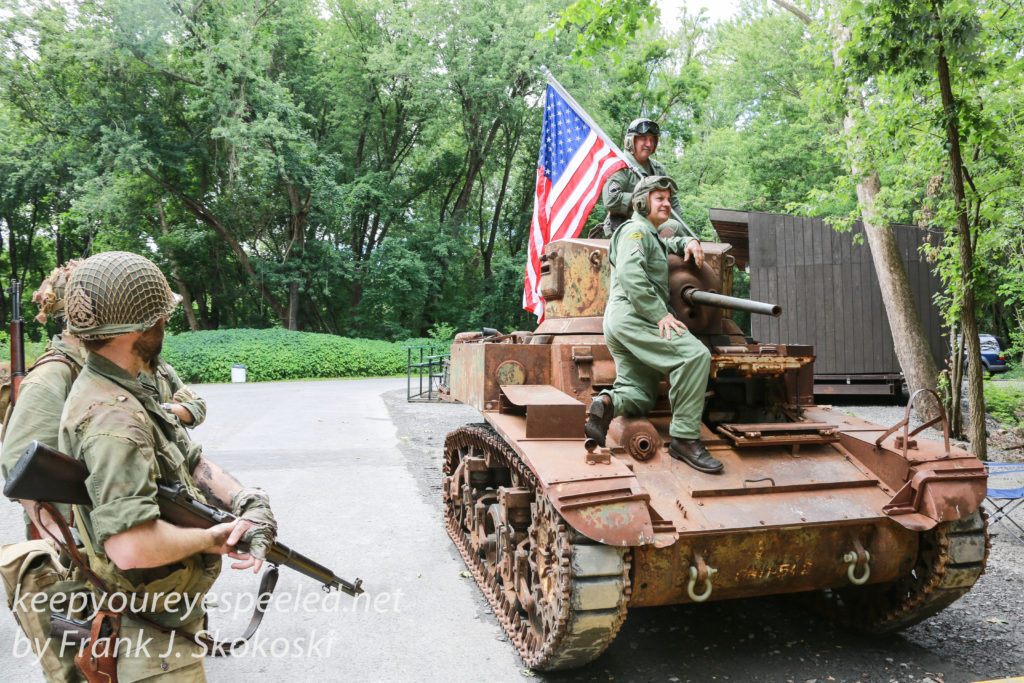 We had near perfect Summer weather this past weekend here in Northeastern Pennsylvania.  Hazy, hot and humid with some thunderstorms on Saturday and a bit less humid but still sunny and hot on Sunday. And of course I had to get outside and enjoy it. 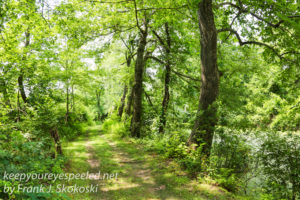 I spent both day hiking in the PPL Wetlands and then checking out the World War II re-enactment a few miles away in Berwick. 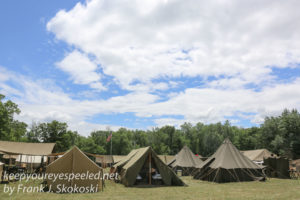 The canals and ponds of the wetlands are now a dark green  color, resulting from being covered in the aquatic plant known as duckweed. 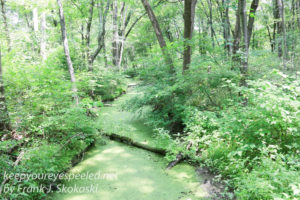 This plant provides food not only for ducks and waterfowl but also for turtles, fish, frogs as well as insects.  It’s hard to find the many turtles that live in these waters this time of year since the remain in the now warm water under the cover of the massive growths of duckweed. Occassionaly, I still will come across one sitting on the water’s edge. 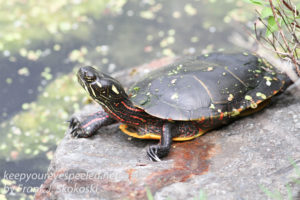 The warm waters also have brought out an abundance of the many species of delicate and beautiful dragonflies and damselflies that live in our area. They seemed to be everywhere,  as were  the not so beautiful mosquitoes. 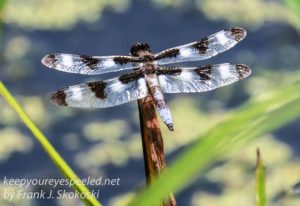 As I walked along one of the ponds I came across this green heron patiently waiting for a meal. 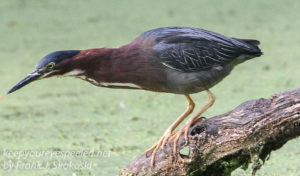 I watched this critter for a half hour, walking up and down on this log. stopping to look, listen and wait for an unsuspecting fish or frog. Unfortunately I wasn’t able to see him catch a meal. Here is a link to some more photographs of this very patient bird. https://keepyoureyespeeled.net/photographs-page-2/nggallery/photographs-page-two-blog/ppl-wetlands-green-heron-july-10-2016 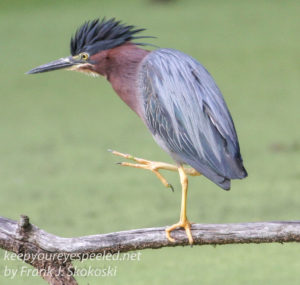 I also saw a few of his larger cousins, the blue heron on my walks. They, too, stand patiently waiting for a frog, small turtle or fish to make a mistake and become a meal.  I scared this one and it  gracefully flew to another more quiet location. 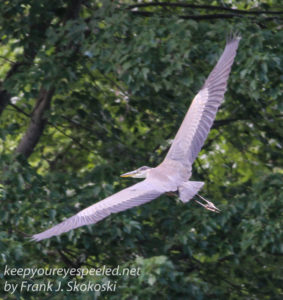 There were a lot of birds active in the heat. Many were again hidden in the thick leaf cover of the tree tops. I was able to photograph this sparrow, I think it’s a song sparrow, with a freshly captured insect in its beak. 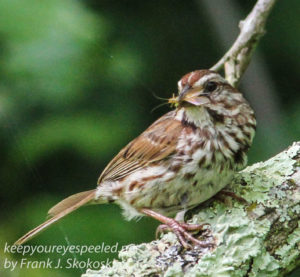 And I spotted a crow atop a high tree limb and watched him/her interact with some other crows filling the woods with their loud caws. Here is a link to some more photographs of these noisy birds. https://keepyoureyespeeled.net/photographs-page-2/nggallery/photographs-page-two-blog/ppl-wetlands-crow-july-10-2016 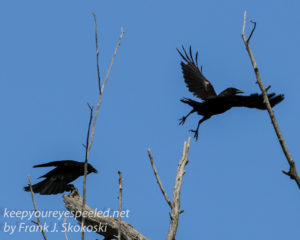 I also came across this beautiful  young cardinal 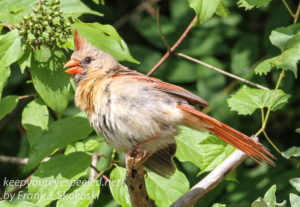 And I saw a number of wood duck and their  young offspring on both of my hikes. 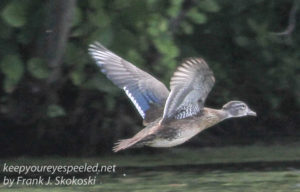 I also saw a few mammals, including chipmunks, squirrels, a groundhog, beaver and this young fawn. 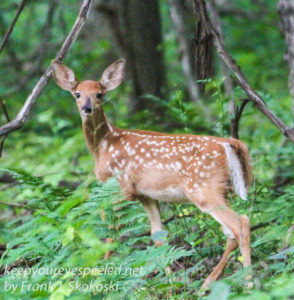 I hate to say this but the rapid plant growth of the spring and early summer season is coming to an end. The leaves no longer have their new luster to them, and some plants, like the skunk cabbage have already begun to fade away. It seems like yesterday these leaves were a bright green . 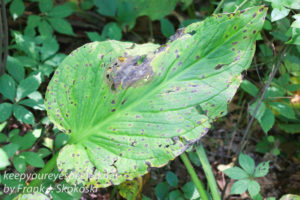 But the maturing of the leaves and other plant life also signifies the beginning of mushroom season. I was lucky enough to find a few including a nice chicken mushroom and this polypore. 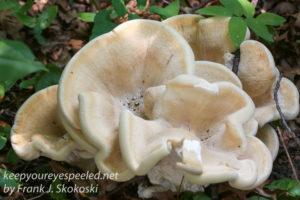 It was hot on Saturday with thunderstorms in the forecast so I decided to leave the lush  wetlands but saw a year long resident who i usually see in the cold of winter , this black-capped chickadee.  Here is a link to some more photographs from my hikes in the PPL Wetlands. https://keepyoureyespeeled.net/photographs-page-2/nggallery/photographs-page-two-blog/ppl-wetlands-july-9-2016 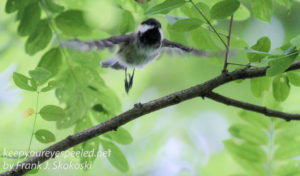 Although I was running late, and thunderstorms were expected, I decided to take drive into Berwick and check out the World War II reenactment that featured a Stuart tank that was built in Berwick in 1942. 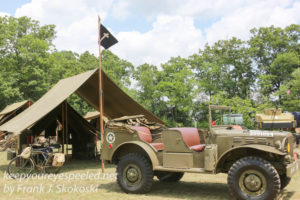 I was taken back in time when I walked the fields where the event was held, feeling so much like I was actually at a World War II camp. 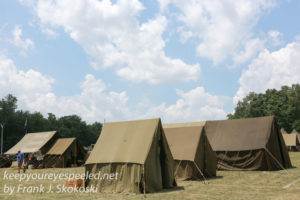 The were many participants dressed in full uniform adding to the feeling of actually being taken back in time. I didn’t have a lot of time to spend but took a quick glance at the many exhibits and knew i should return again on Sunday. Here is a link to some more photographs I took on my visit Saturday. https://keepyoureyespeeled.net/photographs-page-2/nggallery/photographs-page-two-blog/berwick-world-war-ii-july-9-2019

On Sunday I first returned to the PPL Wetlands, with my nephew Mike and did some more hiking as he fished for bass in Lake Took A While. He caught some bass and I took some of the photographs I shared above before we headed back to the World War II reenactment in Berwick, just in time to see them start up the Stuart tank. Here is a link to a video of the tank.. https://youtu.be/6e5yLQOYeCc 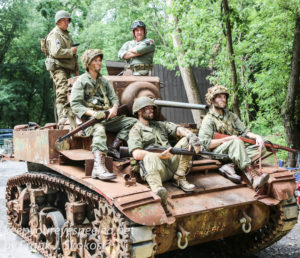 We walked through the encampments, looking at the exhibits with my nephew getting into many discussions about the various pieces  equipment and weapons used by the soldiers of World War II, including his grandfather who served in the OSS. 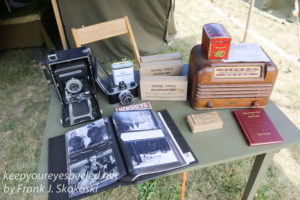 As always I learned so much about the war  from seeing the displays, ranging from weapons, first aid, food and one, my favorite,  about our propaganda depictions of our enemy . 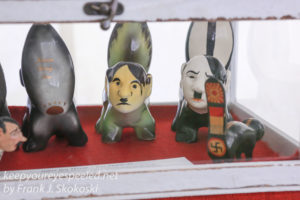 The participants also gave us much information about the roles they were playing, including this pretty young soldier. 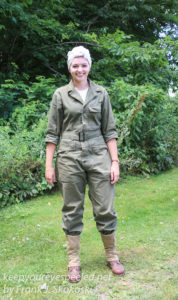 Reluctantly , we had to leave but I  hope to return to this great show next year. it was another busy, but wonderful summer weekend in Northeastern Pennsylvania. They all are. Here is a link to some more photographs from my Sunday visit to the World War II show. https://keepyoureyespeeled.net/photographs-page-2/nggallery/photographs-page-two-blog/berwick-world-war-ii-july-10-2016 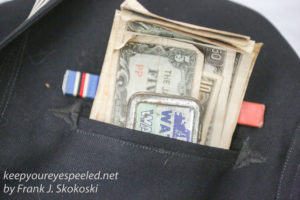 “Summertime is always the best of what might be.”
― Charles Bowden