A Windy And Wintery Afternoon Walk In The Susquehanna Wetlands.

January 8, 2022 / fskokoski@gmail.com / Comments Off on A Windy And Wintery Afternoon Walk In The Susquehanna Wetlands.

A Windy And Wintery Afternoon Walk In The Susquehanna Wetlands. 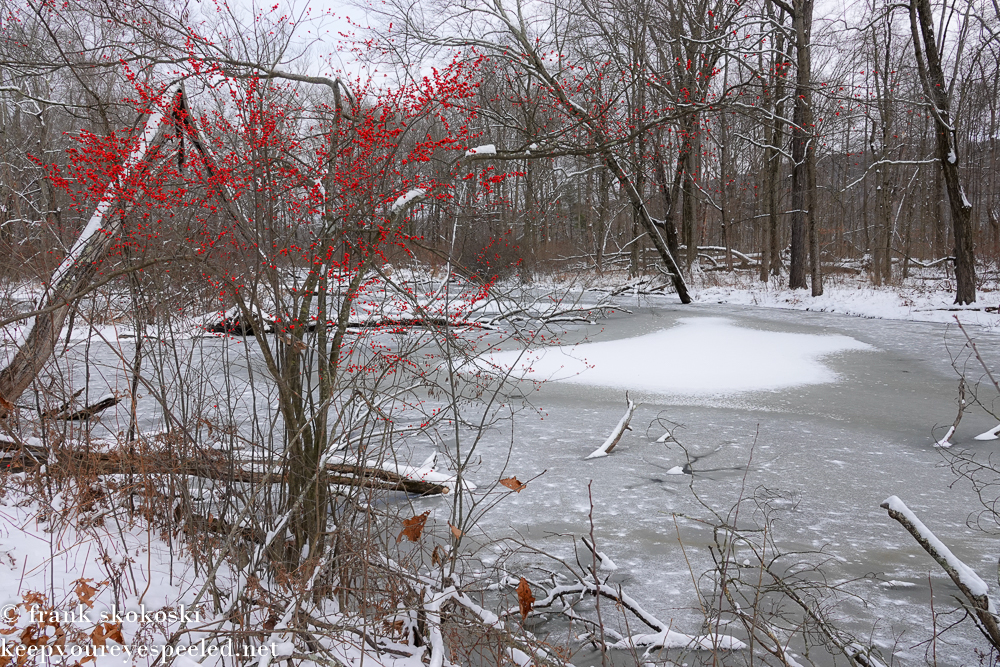 Wintery weather returned to Northeastern Pennsylvania on Friday.  We have had mostly above average weather these past two weeks and no snow since  unexpected  Christmas Eve snowfall.  On Thursday night  around three inches of snow fall here in Hazle Township, Luzerne County. During the day the winds picked up and the temperature dropped.   Once again,  I decided to hike in the Susquehanna Wetlands  in Salem Township and do my grocery shopping  afterwards at the Weis Supermarket in  nearby Berwick. 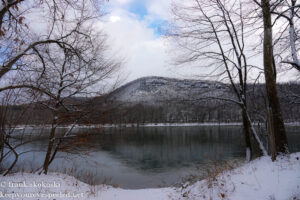 It was partly sunny and blustery, with temperatures in the mid 20’s when I arrived at the wetlands. The waters of the Susquehanna  River were still ice free but this might not be the  case next weekend, as there is more frigid cold in the forecast. 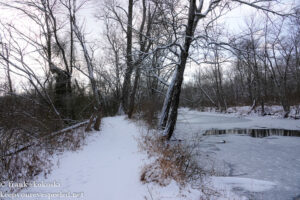 The newly fallen snow told me I was the first human to walk in the wetlands since it fell. There were plenty of animal tracks  in the  snow, including rabbit, squirrel and deer, but not a single people track on my five mile hike. 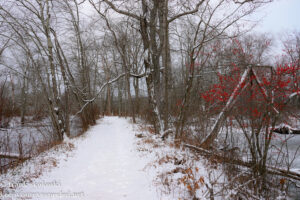 While many of the canals and ponds were now frozen over, 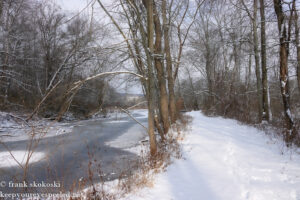 there was still some open water on some of he ponds.  Here I looked for muskrat, mink, beaver and otters.  I didn’t see any. They were smart and not venturing out in this cold weather. 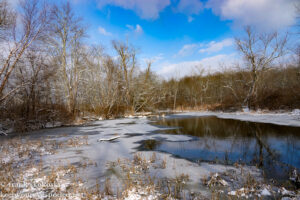 The only critter I saw in the wintery wetlands was this downy woodpecker feeding on some poison ivy berries. 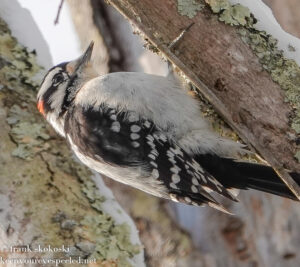 The common winterberries  provided some color from the brown, gray and white wetlands. 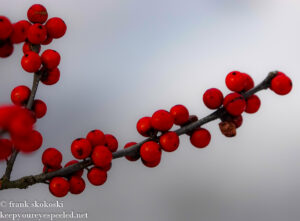 There were many  of these shrubs growing along the trail  creating a bright red contrast to the otherwise drab  colors of  Winter. 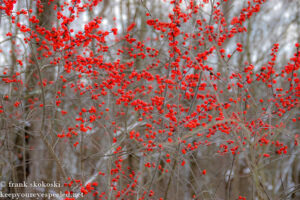 Some green briar berries also remained on the vines, providing color and food to the birds and other critters living in the wetlands in the Winter. 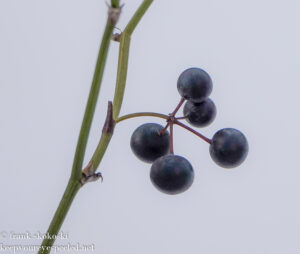 Clouds moved in as I left the wetlands and walked back down to the river. 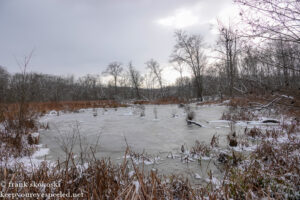 Along the river I saw a kingfisher perched in a tree, as I readied my camera for a photo I noticed a flock of common mergansers on the river.

As I aimed my camera the mergansers flew off, scaring the kingfisher. 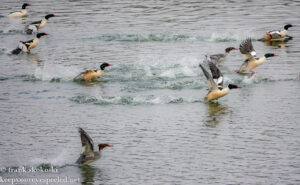 However, I was able to photograph the mergansers as they flew away. 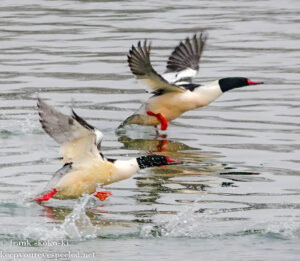 The sun broke throw the clouds again as I walked into the river lands area of the nature preserve, 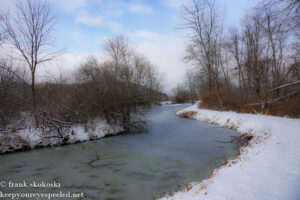 creating some beautiful Winter scenery with the new fallen snow. 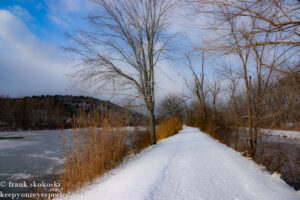 Lake Took-A-While was almost completely frozen over now, and snow covered in some area. 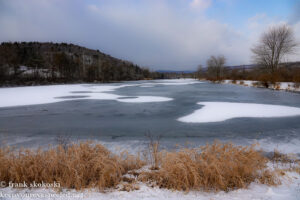 There was a lot more wind  out here in the river lands.  It is open and unprotected, unlike the tree lined trails of the wetlands. It felt wintery for sure. I was cold as the temperature  dropped into the low 20’s and felt much colder in  the strong northwesterly winds. 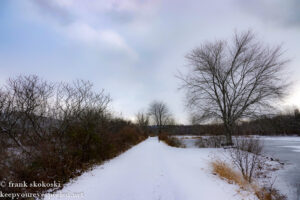 I was determined to get my five miles in so I walked into the strong wind.   I wasn’t the only one minding the cold. There was  little wildlife activity  on my hike. However, I did see a few birds. As I walked past a maple tree along the lake I saw this bird fluttering from branch to branch. At first I thought it was a black capped chickadee. 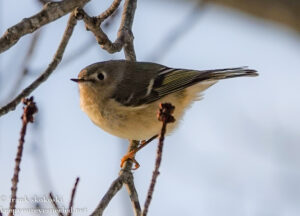 It hopped from branch to branch. I finally was able to get a photograph, and upon closer inspection on my camera viewing screen, I realized it was a ruby-crowned kinglet. These birds are hyperactive and rarely stay still so I was glad to get a couple of photos. 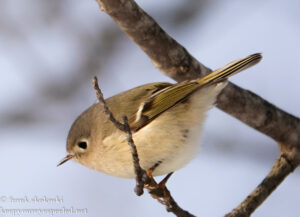 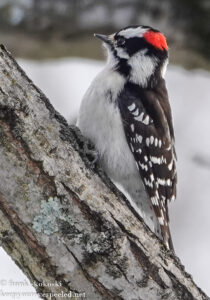 searching for food in the cold and wind. 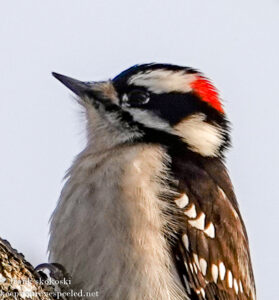 I had walked out about three miles when I decided to begin my return hike. Clouds again  moved in, and as the sun  neared the southwestern horizon the temperatures continued to  drop. 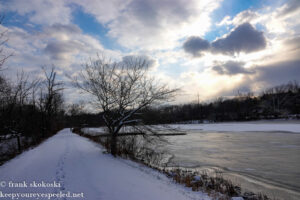 I  saw a frozen flock of white throated sparrows when I entered the wetlands again. 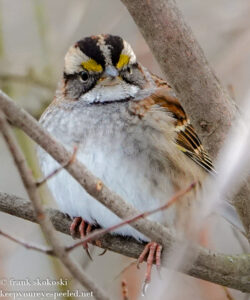 This sparrow seemed to be shivering as it looked like it tried to sleep in the cold. 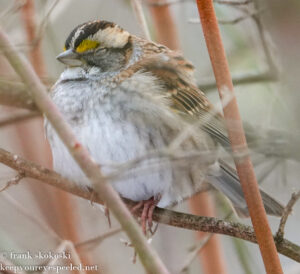 It allowed me to get real close until it awoke and appeared startled. However, it did not fly off, it appeared to fall back to sleep. It was lucky I wasn’t a hungry hawk or eagle. It would be the last bird I saw on my 5 mile hike. Here is a link to a gallery with some more photographs of the birds I saw on my wintery walk in the wetlands. Susquehanna Wetlands birds January 7 2022. 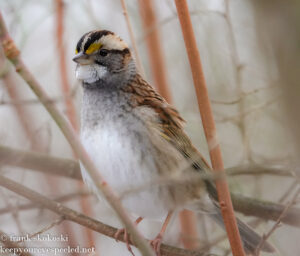 It was nearing sunset  as I finished my hike in the wetlands and river lands. It was not as pleasant as a hike in the warmer months of Spring, Summer or Fall but I was still glad to enjoy the winter scenery and see a few of our Winter resident birds. As I have said so often a hike out here never disappoints. Here is a link to a gallery with some more photographs from my hike in the wetlands. Susquehanna Wetlands January 7 2022. 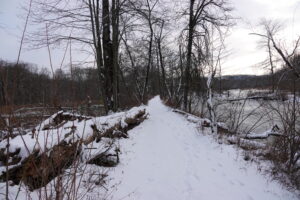