A Wintery Hike On The Broad Mountain In Carbon County

January 14, 2021 / fskokoski@gmail.com / Comments Off on A Wintery Hike On The Broad Mountain In Carbon County

A Wintery Hike On The Broad Mountain In Carbon County 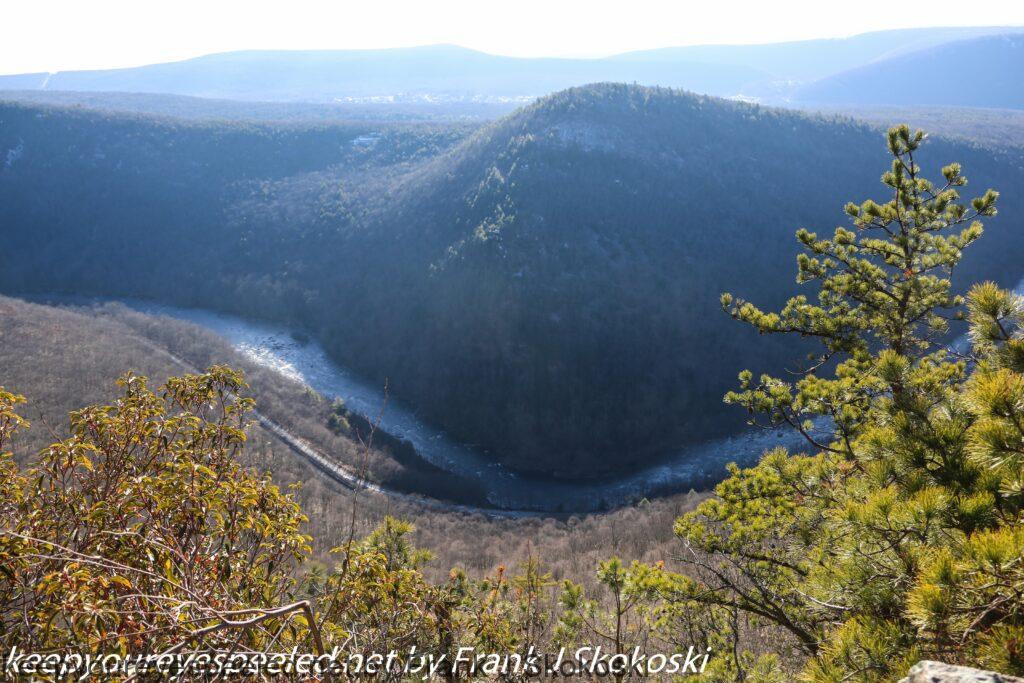 The weather forecast called  for clear skies and cold temperatures  last Sunday.  I decided to drive to  the Broad Mountain in Carbon County and hike out to the overlook atop the Lehigh River Gorge.  It was partly cloudy and a cold 25  degrees when I  arrived early in the morning at the State Game Lands parking area on Route 93. 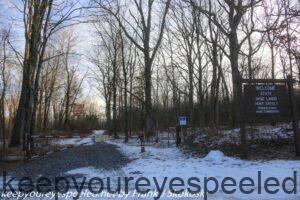 There were  a couple inches of snow and ice on the trail atop the Broad Mountain. The sun was still hidden by the mountain as I began my 3 1/2 mile hike to the overlook. 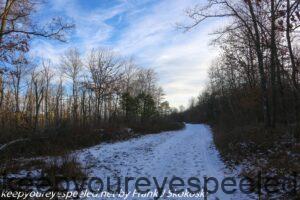 Gradually the sun appeared through the bare trees . 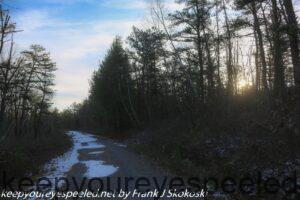 The skies cleared and  the deep blue skies contrasted the pine trees growing along the trail. 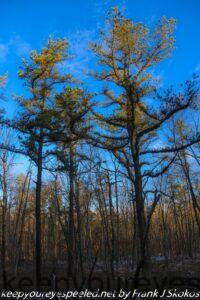 The leaves of the rhododendrons along the trail were drooping, an indication the temperature was below freezing. As the temperature drop even further they curl up in response to the cold. 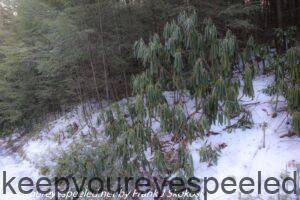 About a mile into my hike the trail sloped downward as it approached one of two creeks I would cross on my hike. The trail soon  crossed the bridge  over first creek,   Jean Runs. I can recall hiking up here before they installed the bridges over Jeans Run and James Run. I would remove my shoes and wade through the creek in the Summer time. 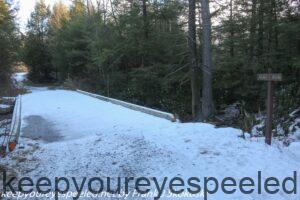 After crossing the bridge the trail once again sloped upward on the mountain. The trail also veered southward, which I welcomed since the cold northerly wind was now on my back and the early morning sun warmed my face. 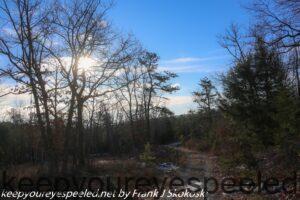 The only wildlife I observed was a red squirrel that scurried across the trail and the sounds of a few crows and black-capped chickadees in the woods along the trail. after about another 3/4 of a mile the trail again descended downward toward the second stream, James Creek or the Glen Onoko Run. 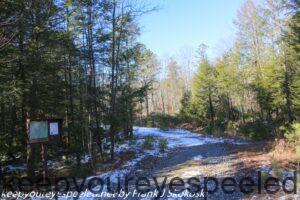 This creek created the famous and spectacular Glen Onoko Falls. The access trail to the Falls form the Lehigh Gorge was closed because of the steep trail and the serious injuries that occurred over the years. 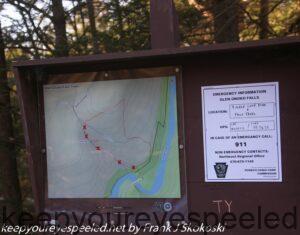 After crossing the bridge over this fast moving creek 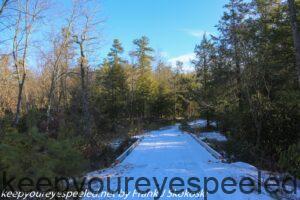 the trail continued upward through an older forest with some larger oak and pine trees. 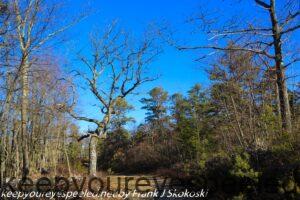 The trail continued for about another 3/4 mile when a side trail led to a large ledge of rocks that provided a spectacular view of the Lehigh River about a thousand feet below. I sat on this ledge many hour over the past few years, thinking about the people who walked along the river over the centuries. 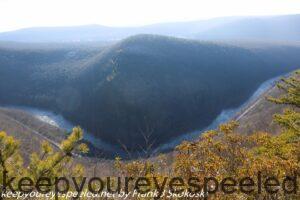 I wondered how many Native Americans may have hiked up here to enjoy the view on their journeys along the river. And who was the first explorer to take in this view. 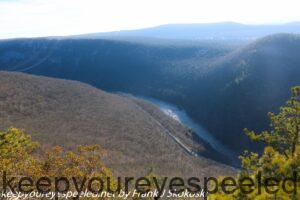 You can hear the roaring of the river from up on the ledge. 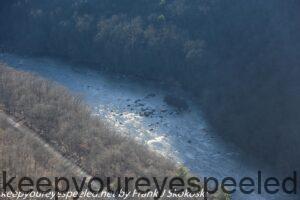 As I sat and took in this tranquil  scene I enjoyed the smell of a nearby campfire. Two young men had hiked up to watch the sunrise and had built a fire to stay warm. The smell of the fire added to my reflections of the history of this area. I have written about it in some other blog posts that you can find in the archives on my home page. 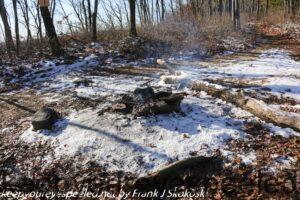 After enjoying the view for about 20 minutes I began my 3 1/2 mile return hike. The weak January sun rose in the sky and did provide some warmth on my long walk back. 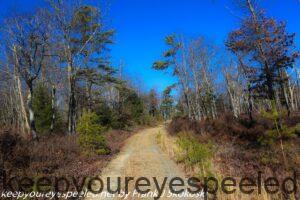 The woodlands surrounding the trail were leafless and drab. Some teaberries along the trail provided some reddish  color to the  mostly brown leaves  on the ground.

I stopped for a short break at Jeans Run and enjoyed listening to the rushing water sitting in a thick grove of rhododendrons and under the towering oak, maple, pine and hemlock trees. 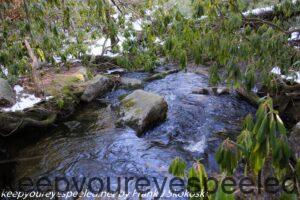 Finally, on the last leg of my trip, about a 1/2 mile from my car, I saw and was able to photograph some wildlife. For 6 1/2 miles I saw one red squirrel and heard a crow and a couple of black-capped chickadees. A titmouse fluttered  on the branches of a pine tree along the trail. 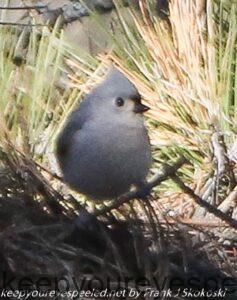 And nearby a hairy or downy woodpecker was also pecking away on the trunk of a pine tree. I had hoped to see more wildlife on my hike but I was satisfied seeing just these two critters and the peace an quite of the woodlands and the spectacular views of the Lehigh River from the  Broad Mountain in Carbon County. 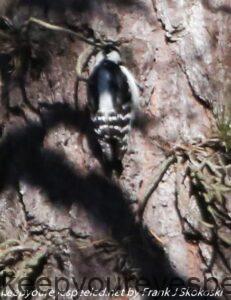 Winter is not my favorite season anymore. but it is better to brave the cold and explore the beauty of nature outdoors than sitting inside all Winter. My humble opinion anyway. Here is a link to a gallery with some more photographs from my hike on the Broad Mountain in Carbon County. Lehigh Overlook Broad Mountain. January 10 2021. 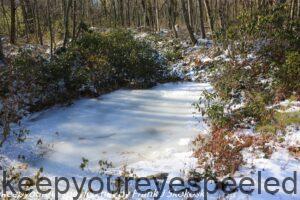 “We all move on the fringes of eternity and are sometimes granted vistas through fabric of illusion. Many refuse to admit it: I feel a mystery exists. There are certain times, when, as on the whisper of the wind, there comes a clear and quiet realization that there is indeed a presence in the world, a nonhuman entity that is not necessarily inhuman.”
Ansel Adams
Shares