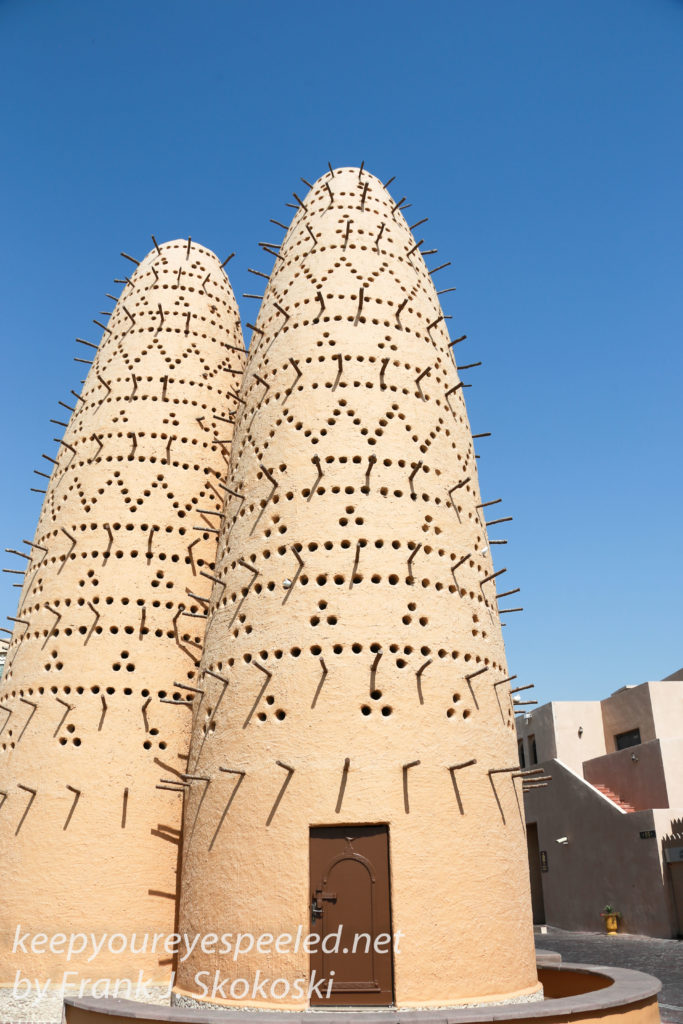 As some of you who follow my blog and Facebook posts may know, there is a lot going on in my life these days which has prevented me from posting on my blog. It also had me a little unprepared for my recent trip to Africa. I usually read about my destinations and try to learn as much as I can about the countries I visit. Not this time. So when we set out from the Philadelphia airport , my sister Linda and I, early on a rainy Sunday morning I was somewhat unprepared what to expect. But it didn’t stop me from being as excited as a six year old on his first field trip. Travel and adventure have always been a passion to me. 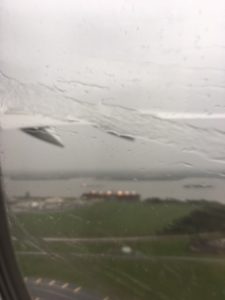 It was a long twelve hours of flying to Doha, Qatar where we planned to stay a day to explore this exotic Arab country, one of the wealthiest nations on the planet, on our way to Africa. Fortunately the flight was empty and I had three seats to myself, although I still could not take advantage of the situation and fall asleep.  We arrived early, around 5 a.m. just as the hot desert sun was rising through the mist created by the mixture of previous day’s  heat and the  waters of the Persian gulf. 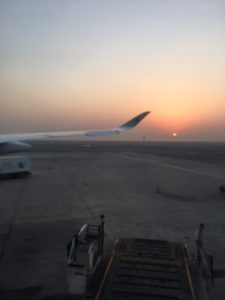 After arriving at the Doha Marriott Hotel we were delighted to find our  rooms available for us and also enjoyed a hearty breakfast which included local foods, and  some delicious varieties of hummus, including my favorite, one made with eggplant and garlic. 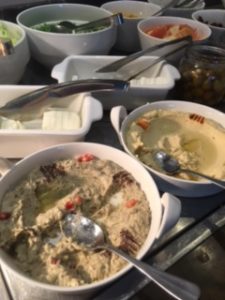 After getting settled in our rooms were off to explore Doha and decided to follow the advice of the staff at the hotel and visit  the Katara Cultural Village. We learned a lot about the city and it’s culture from our cab driver, a native Ethiopian  working in the city. Upon arriving at the Katara cultural center we learned it is a newly built district, probably in anticipation for the arrival of many visitors when Doha hosts the World Cup in 2020. 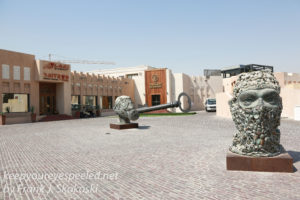 We were early and most of the museums and buildings were not open. We were able to enter a mosque and learned  about the prayer customs of Islam. 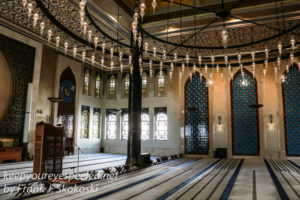 We strolled around the vast cultural center but, even though it was early, the heat was already oppressive, nearing 100 degrees. 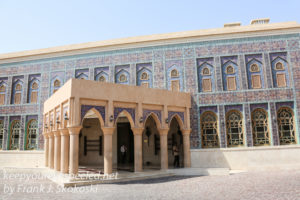 We decided to call our friendly cab driver and  asked him to take us out of the city to see rural Qatar and the desert. We had a nice drive through the city and I enjoyed taking int the local sights, including the famous Aspire Tower also known as the Torch Doha. 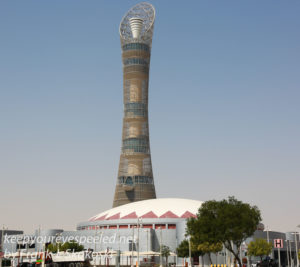 We than drove outside the city and found the vast desert that is Qatar. We came to within 30 miles of Saudi Arabia and  I was surprised at the amount of truck traffic on the highway leading to that country. Here is a  link to some more photographs from our morning travels in Doha. https://keepyoureyespeeled.net/africa-october-2016/nggallery/africa-october-2016/Doha-Qatar-October-10-2016 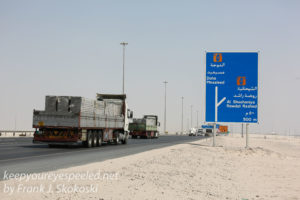 We made our way back into Doha and decided to visit the Museum of Islamic Art. I always enjoy learning about a religion and  culture by viewing it’s art and artifacts and never have nearly enough time to spend in a museum as I would like. 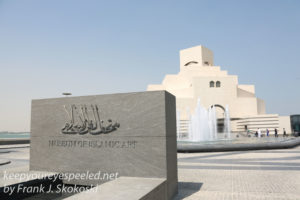 And my visit to the museum in Doha was no exception. I enjoyed the many displays of the various items and artworks  used by and created by the Islamic religion and culture over the centuries. 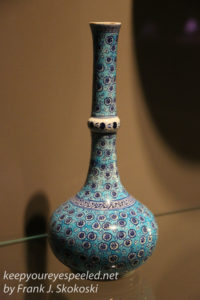 Once again it reminded me that, although we have different beliefs, we are all contacted by our love for, and appreciation of art and beauty. 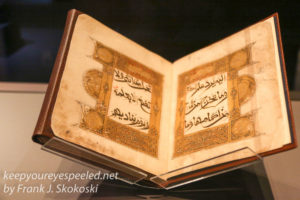 I was surprised when I came across an exhibit honoring a fellow American citizen, Mohammed Ali. I just lost a friend who was very close to this gifted  boxer and wish I could have shared this experience with him. But, I have a feeling that I did and that he was smiling on me with his old friend as I perused the items displayed in the exhibit. Here is a link to some more photographs in the Mohammed Ali Exhibit .https://keepyoureyespeeled.net/africa-october-2016/nggallery/africa-october-2016/Doha-Qatar-Museum-of-Islamic-Art-Muhammad-Ali-October-10-2016- 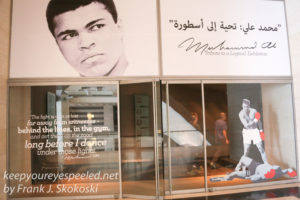 We proceeded through the many displays of Islamic science, literature, art and many areas of daily living of the peoples of Islamic traditions in the Middle East.  As I said, there was no where near enough time to take it all in. Here is a link to some more photographs of my visit to the Museum of Islamic Art. https://keepyoureyespeeled.net/africa-october-2016/nggallery/africa-october-2016/Doha-Qatar-Museum-of-Islamic-Culture-visit-October-10-2016 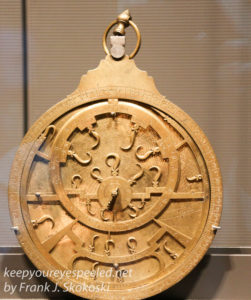 It was now late in the afternoon and we headed back to the hotel in the oppressive heat.  After the long flight, the heat and the little sleep I had I was ready to call it a day, but we decided to see  the local market, so after a brief rest we were off again. 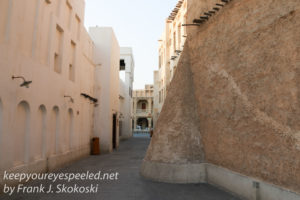 We arrived near sunset and the market was just beginning to fill up with the many shoppers, dinners and tourists which would soon crowd the streets. 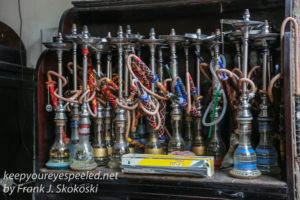 Once again, limited time kept us from seeing the many products being offered for sales in the narrow crowded lanes of the indoor market. 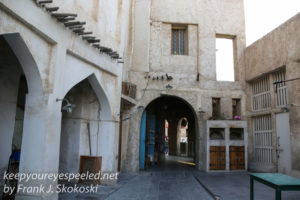 I was drawn to the  colorful spices displayed in many of the shops. It reminded me that Qatar was once a stop on the great spice route that connected Europe with the Far East. I thought of the many merchants who sold the same spices as they lived there lives near here over the many centuries. 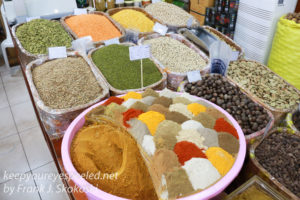 The markets became even more crowded as many local residents and tourists bargained over all types of goods and merchandise, ranging from shoes and cloths to meats, pots and pans, and fresh produce. 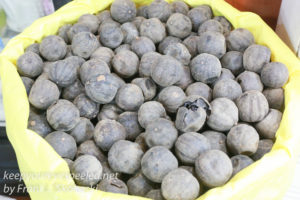 Outside, in the narrow streets the many restaurants were filled with customers and the aroma of food filled the warm evening air. It was getting dark and we decided to head back to the hotel for dinner and for much needed rest after along day of travel and exploring.I was very tired but enjoyed every minute of the first leg of my trip to Africa, and the endangered mountain gorillas of Rwanda’s Volcano National Park. Here is a link to some more photographs from the markets.https://keepyoureyespeeled.net/africa-october-2016/nggallery/africa-october-2016/Doha-Qatar-afternoon-walk-October-11-2016 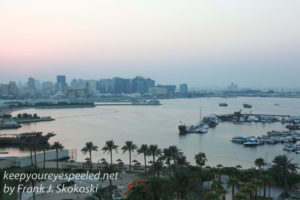 Islamic culture has given us majestic arches and soaring spires; timeless poetry and cherished music; elegant calligraphy and places of peaceful 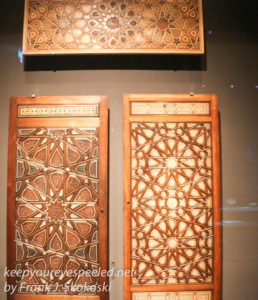