Africa Day Eight: Across, And Under, The Bridge To Zambia, Voracious Vultures And An Elephant Ride.

November 19, 2016 / fskokoski@gmail.com / Comments Off on Africa Day Eight: Across, And Under, The Bridge To Zambia, Voracious Vultures And An Elephant Ride.

Africa Day Eight: Across, And Under, The Bridge To Zambia, Voracious Vultures And An Elephant Ride. 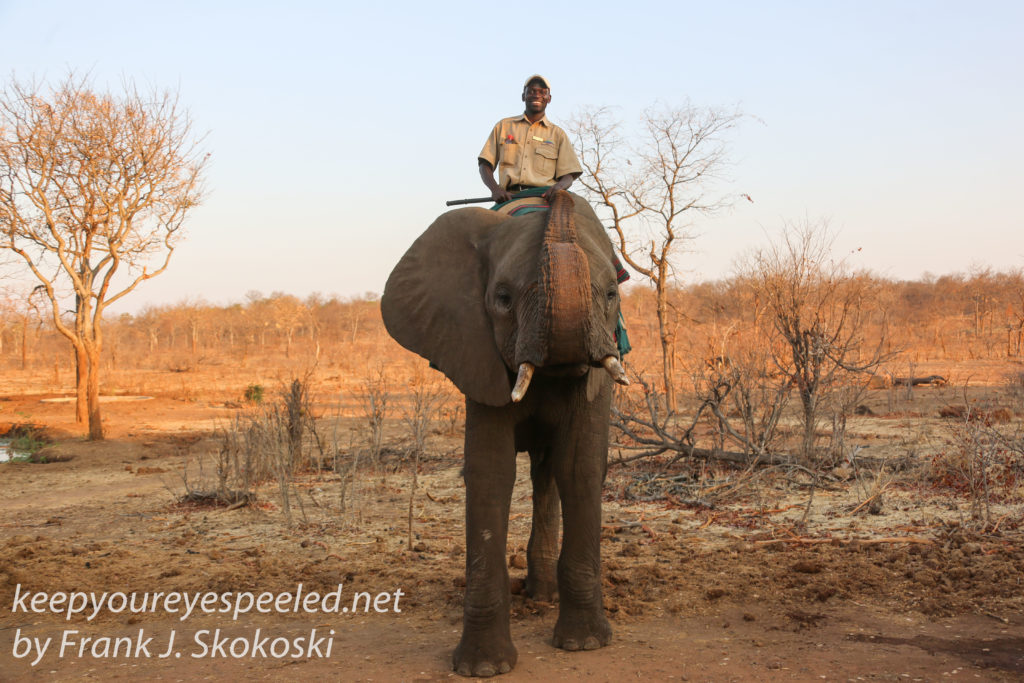 Even  though we had another long, but adventure filled day ahead of us, I was still up early hoping to capture an African sunrise from the grounds of the Victoria Falls Safari Lodge. It took a while to find a good observation spot but I finally did.It’s always nice to see a sunrise but even more special when traveling. 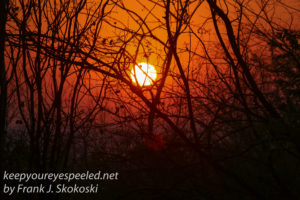 I also had time for a  short walk on a nature trail where I was greeted with the loud, and almost human like, calls of these birds fluttering in the trees above. 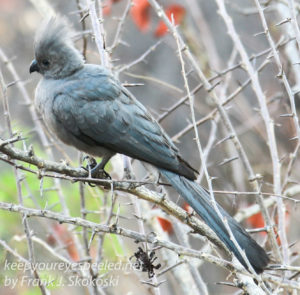 I walked through the brown and parched landscape, wondering how different it would look after the rains arrived and changed it into a forest of green. 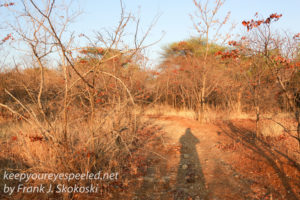 I had some time before breakfast so I sat with a cup of coffee and admired the scenery and tried to photograph some of the many colorful and exotic  birds that were now active with the morning light. Here is a link to some photographs from my morning hike. https://keepyoureyespeeled.net/africa-october-2016/nggallery/africa-october-2016/Zimbabwe-Victoria-Falls-Safari-Lodge-wildlife-October-16-2016

After breakfast we headed back down to Victoria Falls, and this time, after a short stop at the border immigration station, crossed over the famous bridge into  Zambia. 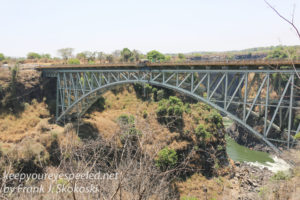 Once on the Zambian side of the river, we were treated to an entertaining theatrical presentation about the history of the bridge and it’s construction by a young  actor who played the role of the  young French chief engineer who oversaw the construction. We learned it was an engineering marvel when it opened in 1905 and was, at that time, the highest railway bridge in the world. 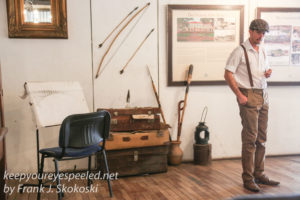 The actor, Peter, than became our tour guide and led our group on an exciting  walk on the catwalk under the bridge, 420 feet above the Zambezi River. 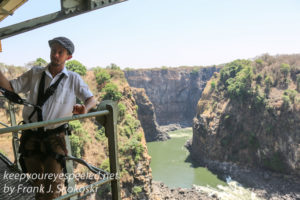 We were secured with a safety harness attached to safety ropes as we walked under the bridge. We learned so much about it’s history and construction as well as the  Zambezi River Gorge and Victoria Falls. We were shaken by a  train passing overhead as we finished our tour. 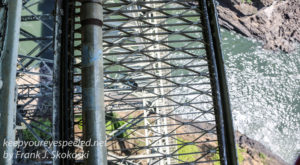 It was an informative and adventurous walk. We ended the tour and headed back to the Visitor center were we were able to get a drink at the cafe. Here is a link to some more photographs of out visit to the famous Victoria Falls bridge. https://keepyoureyespeeled.net/africa-october-2016/nggallery/africa-october-2016/Zambia,-Zimbabwe,-Victoria-Falls-bridge-tour-October-16-2016- 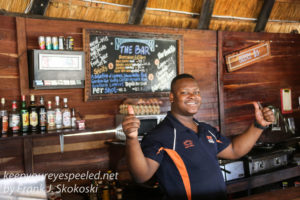 We headed back to the lodge for lunch and had some time to check out some of the local wildlife that showed up on the grounds of the lodge. 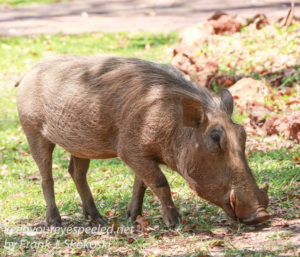 And after a nice lunch (doesn’t it seem like we are always eating on this trip) we had the unique experience of watching lunch being served at the vulture restaurant. The lodge feeds them everyday so as to keep them on the park grounds were they are safe from local residents who consider them pests and poison them.  There ravishing attack of the food was amazing .Here is a link to a video I uploaded to my You Tube channel. https://youtu.be/bKw4P-PNuWk   Amazing And here is a link to some more photographs of the vultures and other wildlife at the lodge https://keepyoureyespeeled.net/africa-october-2016/nggallery/africa-october-2016/Zimbabwe-Victoria-Falls-Safari-lodge-wildlife-October-16-2016- 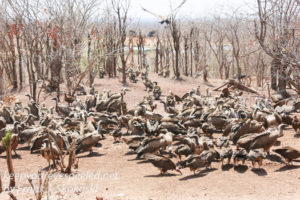 Our next adventure was at  the Wild Horizons Elephant Sanctuary. We were going on an elephant ride.  At first I was not too enthusiastic about the elephant ride. I have heard stories of how the elephants are treated cruelly  to make them carry humans on their backs. My fears were quickly laid to rests by our guide at the sanctuary. He explained how these elephants are rescued and live freely  on the sanctuary.  They are not prodded into obeying their riders but rather by positive re-enforcement  including being rewarded with treats at the end of the ride.  Here is a link to more information about the wonderful work of the Wild Horizons Elephant Sanctuary. 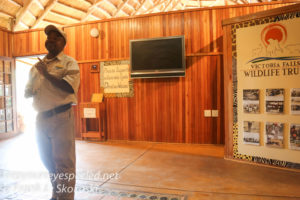 We were soon introduced to our elephants and their  handlers. 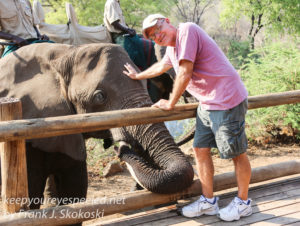 The elephants ranged in size from the gigantic males to smaller females and juveniles. We soon became familiar with our elephants and they us. We were divided into two groups and my sister and I climbed abroad our elephant, a  young male  named Izibulo handled by Farai. 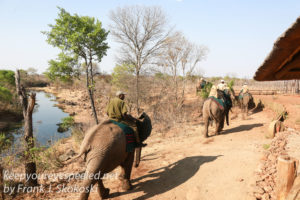 I will have to admit, it took a bit getting used to straddling atop a three ton elephant but the ride was interesting, more so to become familiar with and observe  the elephant than the ride itself. 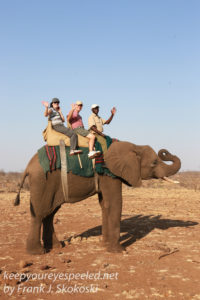 The elephants walked at a slow pace through the brown parched landscape seeming to enjoy the experience as much as we did, although that is just my observation. 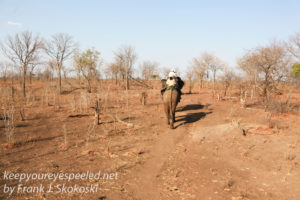 The elephants were free to roam on their own a bit and some took advantage to grab a quick snack on the way. 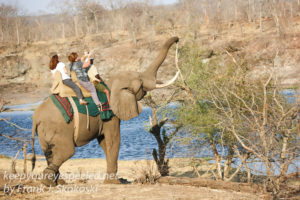 We also  learned so much from our informative handler Farai, not only about the elephants, but about the environment, history and culture of Zimbabwe.

Our ride came to an an end and we waited at the cafe, enjoying a drink, and a conversation with the Sottish bartender and shopkeeper about his experiences in Zimbabwe, were he has lived most of his adult life. After the other half of our group finished their ride we had the delightful experience of rewarding our elephant for their work. They enjoyed the treats we tossed them, either into their open mouth or outstretched trunk. I really feel like I bounded with our elephant Izibulo and hope to meet him and our handler Farai again some day. Here is a link to some more photographs of our ride with the elephants. https://keepyoureyespeeled.net/africa-october-2016/nggallery/africa-october-2016/Zimbabwe-elephant-ride-October-16-2016- 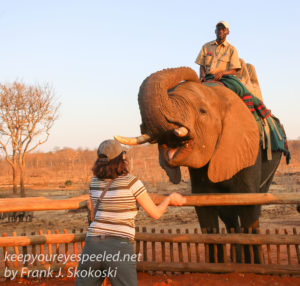 After some appetizers and a beverage we had time for some shopping, and to watch the beautiful African sunset before we headed back to our lodge for dinner. It was another long, but wonderful day exploring some of the wonders of Africa. Here is a link to some more photographs of the beautiful sunset. https://keepyoureyespeeled.net/africa-october-2016/nggallery/africa-october-2016/Zimbabwe-sunset-October-16-2016-

“But perhaps the most important lesson I learned is that there are no walls between humans and the elephants except those that we put up ourselves, and that until we allow not only elephants, but all living creatures their place in the sun, we can never be whole ourselves.” 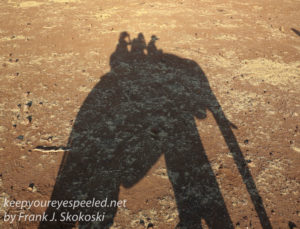