Africa Day Eleven: A Morning Walk In Capetown And A Ride Along The Coast To The Cape Of Good Hope.

November 26, 2016 / fskokoski@gmail.com / Comments Off on Africa Day Eleven: A Morning Walk In Capetown And A Ride Along The Coast To The Cape Of Good Hope.

Africa Day Eleven: A Morning Walk In Capetown And A Ride Along The Coast To The Cape Of Good Hope. 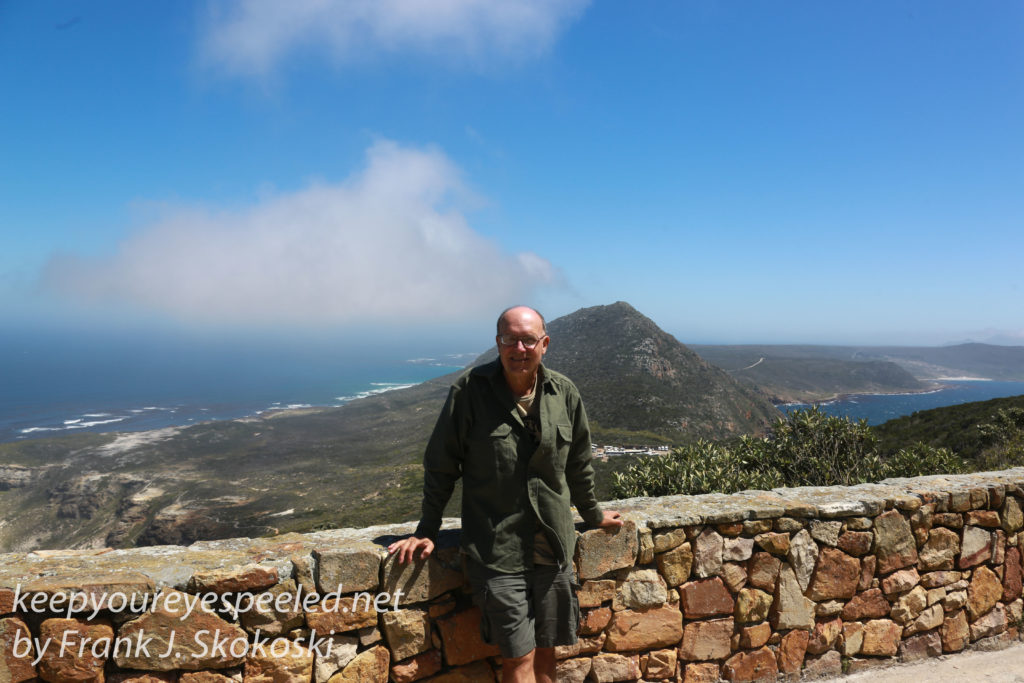 I awoke the next day  early for the second time in South Africa. This time, however,  I had time to head outside and do some sightseeing before we began our tours. . I left the charming Underberg  House  in the morning twilight. 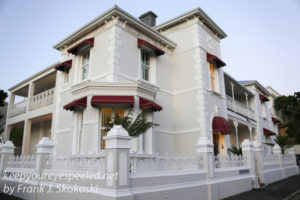 Not having a map,  I decided to head in the direction where we had a late dinner the night before at this nice little place the Beleza, great Portuguese and Italian  food and a lovely waitress. . 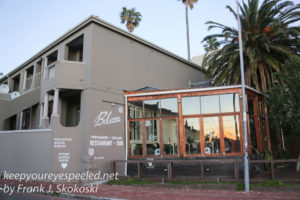 As I looked up in the twilight I was immediately aware of  a  mountain towering in the distance in front of me. I later found out this is the  mountain Capetown is famous for, Table Mountain. 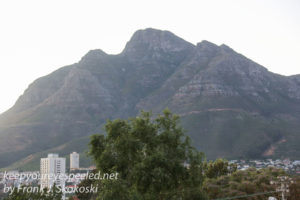 I walked through the upscale  neighborhood, with many businesses and  nice restaurants, including this one  the Millers Thumb, which we heard was one of the best seafood restaurants in Capetown, but which had no tables available for us the previous evening. 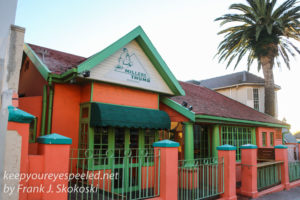 I walked up  steep Kloofnek Road, which at first had little traffic but became quite busy as the morning progressed. The street was lined with nice homes with well kept gardens. 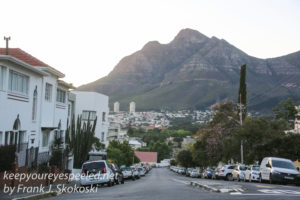 As I walked upward Table Mountain was to my left and north and, to  my left and south was this famous peak, Lion’s  Head, now  lit by the rising sun , We would see more of this peak later during our travels. 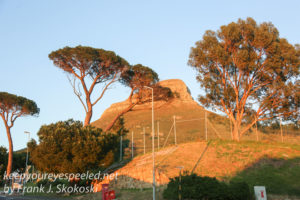 I decided to turn back and made observations of the beautiful houses and gardens on my way. 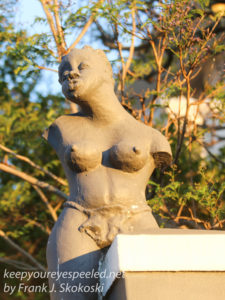 I still had some time when I neared my bed and breakfast so I headed toward downtown Capetown, where the neighborhoods became more commercial. 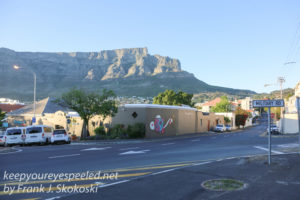 There were still views of the mountains and I watched the different shades caused by the rising sun. It was a pleasant walk, a little cool, as it was early Spring here in the Southern Hemisphere. I always love exploring the neighborhoods of the cities I visit.  We had a wonderful breakfast and soon were off for a tour of a place I had first heard of in grade school, the famous and historic Cape of Good Hope. Here is a link to some photographs from my morning walk. https://keepyoureyespeeled.net/africa-october-2016/nggallery/africa-october-2016/South-Africa-Capetown-Morning-walk-October-19-2016-

We drove the same route I walked and past the famous Lion’s Head peak on our way to the Cape of Good Hope. 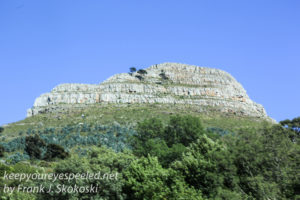 We soon came down on the other side of the mountain and were treated to our first spectacular views of the Southern Atlantic ocean. 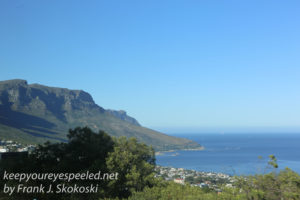 We continued along the coast, learning so much about the history, culture and natural environment from our excellent guide Peter as we enjoyed the spectacular views, many with Lion’s Head peak in the distance. 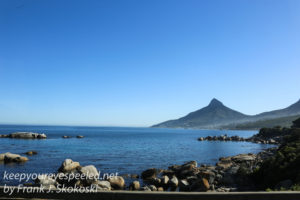 We took a short break in a small  coastal town were we got a cup of coffee and a snack.  We were greeted by these playful  fellows as we  walked along the docks. 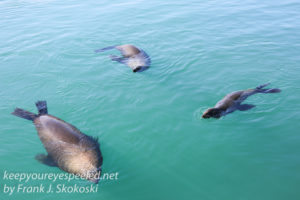 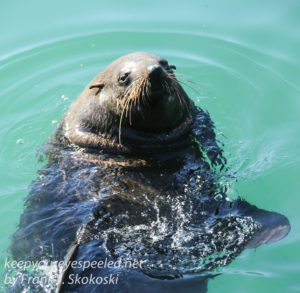 We then made our way to famous Chapman’s Peak and it’s beautiful view of the Atlantic Ocean. 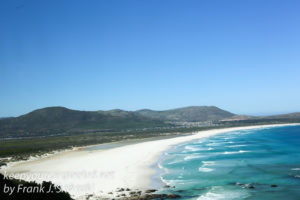 We continued our journey South and into Cape point National park where we saw some of the local wildlife. . Here is a link to some more photographs from our drive to the Cape. https://keepyoureyespeeled.net/africa-october-2016/nggallery/africa-october-2016/South-Africa-drive-to-Cape-point-October-19-2016

We now were at a place  I first heard about so many years ago, in history class  in elementary school , when  I first  learned of  Henry the Navigator  and his sponsorship of exploration of the west African coast,  how it later led  discovery of this place, the Cape of Good Hope by Bartolomeu Diaz and eventually to Vasco da Gama circumnavigating this point on his first voyage to India. I so often wondered about those first great explorers and the adventures they took into distant and unknown lands.

We  got out of our bus and found   winds and  rough sea shore along this most southern part of  Atlantic coast. 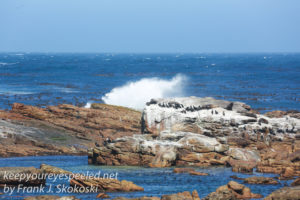 The shoreline was strewn with rocks and piles of seaweed, with many shore birds flying along the waves searching for a meal. 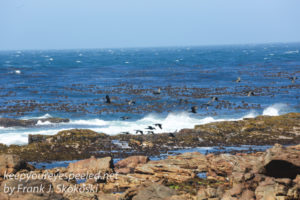 We got to explore this famous areas for a bit and then drove a bit west to the light house at Cape Point. 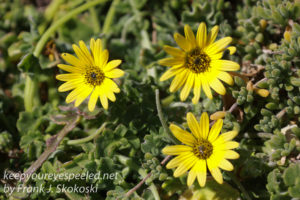 We had two options to reach the summit, and the lighthouse, a long walk from the parking lot or a tram, the Flying Dutchman. Short on time,  we took the ride on the  Flying Dutchman and we were soon treated to the spectacular views from the observation deck. 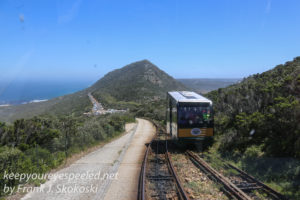 I thought of the many sailors who looked forward, for weeks and moths, to this place since it meant they have crossed from one great ocean, the Indian, into another, the Atlantic.  I have now been  on all three great capes  of the Southern Hemisphere, here, the Tasmanian Cape which separates the Indian and Pacific Ocean and Cape Horn which separates the Atlantic and Pacific Oceans. There is no exact point were this separation occurs but I sure was close enough, 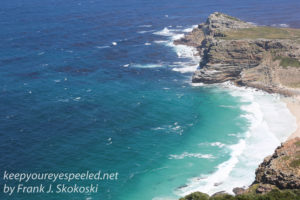 And looking south from any of these  Capes, there is only the cold waters of the great Southern Ocean separating you from distant  ice covered continent of Antarctica at the bottom, or top, depending how you look at it, of our planet. 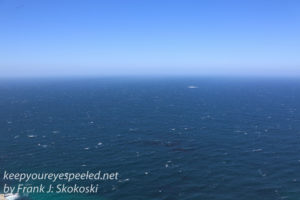 We spent some time taking  in the panoramic views  from  the lighthouse, learning that this is not in fact the southernmost point in Africa, that is at Cape Agulhas  a few miles to the east. 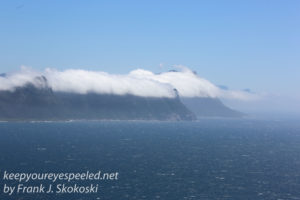 After having enough of the awesome views, and strong winds, we made our way back down to the Flying Dutchman and then to the Two Oceans  restaurant for a delicious meal with a spectacular view. Here is a link to some more photographs fro our visit to the Cape of Good hope and Cape Point. https://keepyoureyespeeled.net/africa-october-2016/nggallery/africa-october-2016/South-Africa-Cape-of-Good-hope-October-10-2016- 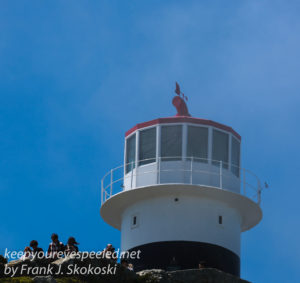 A sailor’s geography is not always that of the cartographer, for whom a cape is a cape, with a latitude and longitude. For the sailor, a great cape is both a very simple and an extremely complicated whole of rocks, currents, breaking seas and huge waves, fair winds and gales, joys and fears, fatigue, dreams, painful hands, empty stomachs, wonderful moments, and suffering at times.A great cape, for us, can’t be expressed in longitude and latitude alone. A great cape has a soul, with very soft, very violent shadows and colours. A soul as smooth as a child’s, as hard as a criminal’s. And that is why we go  Bernard Moitesseir 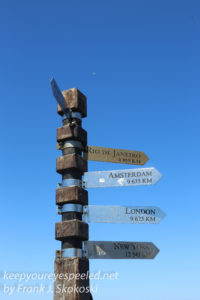