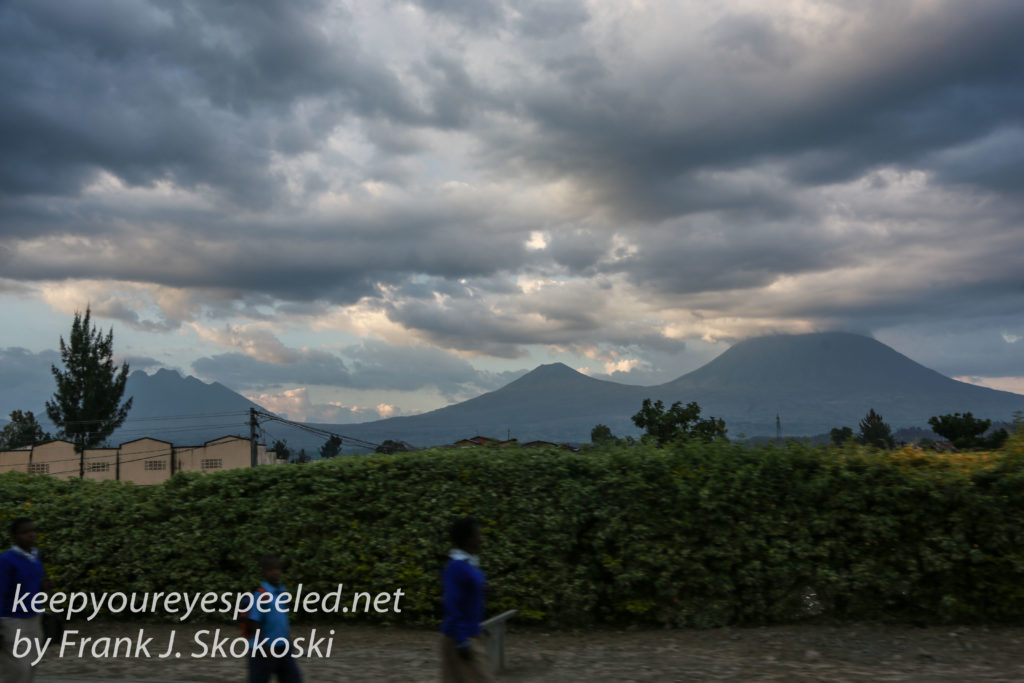 After our emotional and thought provoking visit to the Kigali Genocide Memorial. we drove a short distance to the famous Hotel des Mille Collines,   also know as Hotel Rwanda. 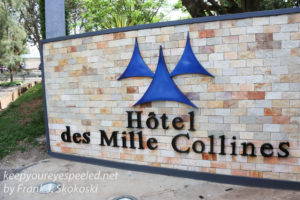 This is the hotel on which the famous movie was based. I didn’t see the movie but learned about the role it played in the genocide from our guide. We had a nice lunch at the hotel,which included a nice choice of desserts. 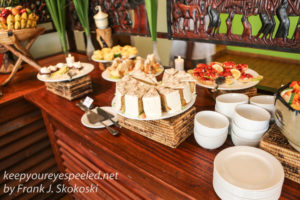 Afterwards, I had some time to wander the grounds with some birder friends in our group in search of some of the local bird life. We were able to spot a few, the names of which i have already forgotten and will hope my birder friends can help me identify again. This was one of them. 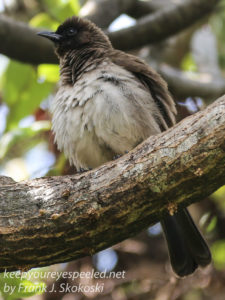 I found an interesting red shrub which looked a lot like a poinsettia plant found here in our stores at Christmas. After a short discussion about the role the hotel and it’s owners played in the genocide we were off to Volcano National Park. Here is a link to some more photographs from our visit to Hotel Rwanda. https://keepyoureyespeeled.net/africa-october-2016/nggallery/africa-october-2016/Kigali-Rwanda-Rwanda-Hotel-October-12-2016- 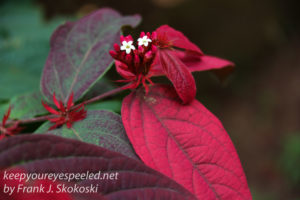 We left the busy, hilly streets of downtown  Kigali but continued in the city limits for many miles, encompassing four ridges and valleys. 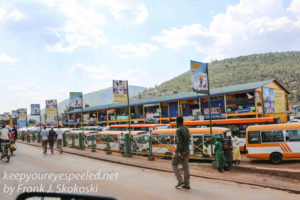 The city itself is like Denver about a mile or 5000 in elevation. 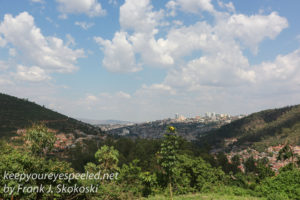 We ascended the even higher hills that surround the city which, surprisingly still were crowded with both motor vehicle, bicycle and pedestrian traffic. 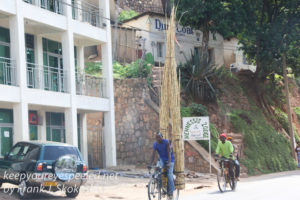 We continued on our scenic journey learning so much about the history and culture of Rwanda from our guide. 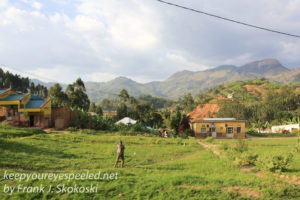 It was sad to see that the beautiful hills were almost all striped of their trees and now devoted to farming and residential purposes. They still were very scenic as we drove through the winding roads but the loss of tree cover also meant the loss of the elephants, buffalo and even lions that once lived in these areas. And the rivers ran brown with the eroded soil from the loss of trees. 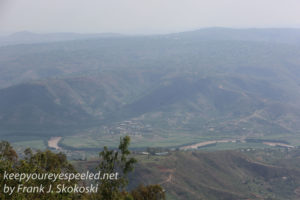 I enjoyed the passing landscapes, mainly rural farms with an occasional town or village.  Many of the local residents still relied on their feet as their primary mode of transportation.After leaving the vast jurisdiction of Kigali city we entered into the Northern Province of Rwanda. It was time for a rest stop at a local market and were greeted by a large crowd and a local group performing a traditional dance. 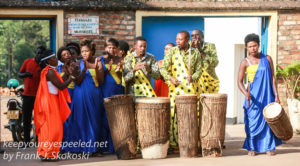 We soon learned the greeting was not for us but for a visiting German official touring the province.  We still enjoyed the dance, set in these beautiful mountains. Here is a link to  a video  of the dance I uploaded on Youtube.https://youtu.be/d__1h-0-pv0

Inside one of the shops I saw this pretty young lady behind a pastry counter. I asked if I could take a photographs, and although she shyly shook her head. I knew by the expression on her face she wouldn’t mind and when I asked again she smiled, again shyly and nodded yes. 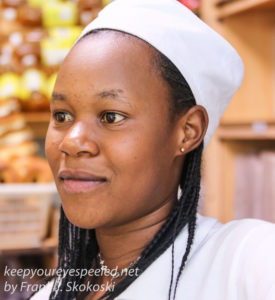 And she convinced her co-worker to join her for a photograph. I ma not good at photographing people, but occasionally can’t pass up an wonderful opportunity to capture the beauty in a face, such as these two. It reminds us how, despite the many miles, customs, religions and circumstances that separate us, we are all so much alike. 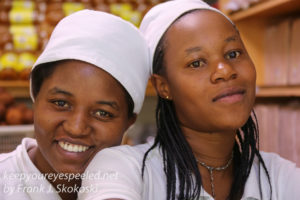 As we resumed our journey, I was treated to a local speciality, banana beer, which I thought was quite good, tasting more like a liquor than a beer. We now  were in a higher, and more forested, part of Rwanda, almost  9000 feet, as we neared Volcano National Park. 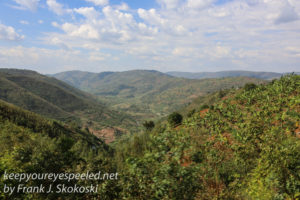 It was late and getting dark, well, it gets dark around 6 p.m. every day here since it is only about 2 degrees from the Equator, when we first saw the large volcanoes of the park in the distance. 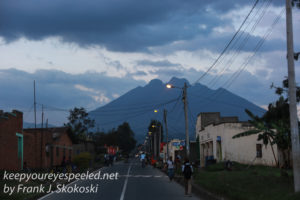 We were now in the town of Ruhengeri which borders the National Park. i was surprised at the amount of people walking the streets in the approaching darkness. 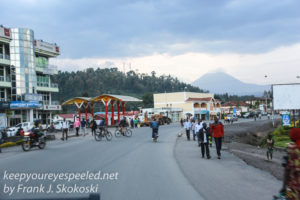 We made our way through the busy streets and through some back, unpaved roads of the town and made it to our hotel , Mountain Gorilla View Lodge,  as the darkness quickly set in with the setting sun. There is not much twilight near the Equator. 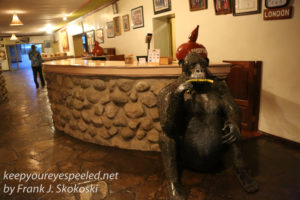 I settled into my cozy cabin. with a view of two of the long dormant volcanoes in the distance. We met for a nice dinner and I retired to my cabin. glad that a fire was light since there was no heat and it got quite cool at 9000 feet even near the Equator. I feel asleep,  knowing tomorrow would be the day we would venture into  the forests in search of the endangered mountain  gorillas. Here is a link to some more photographs from my drive to Volcano National Park. https://keepyoureyespeeled.net/africa-october-2016/nggallery/africa-october-2016/Africa-Rwanda-drive-to-Volcano-National-Park-October-12-2016- 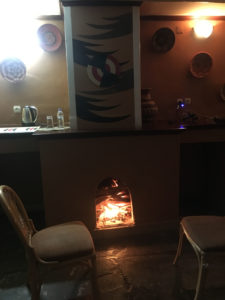 “Almost astride the Equator, night fell like a portcullis. The sun dropped below the horizon and suddenly all was dark.”
― Tim Butcher