February 14, 2021 / fskokoski@gmail.com / Comments Off on Inauguration Day Three: An Early Morning Walk To The Lincoln Memorial 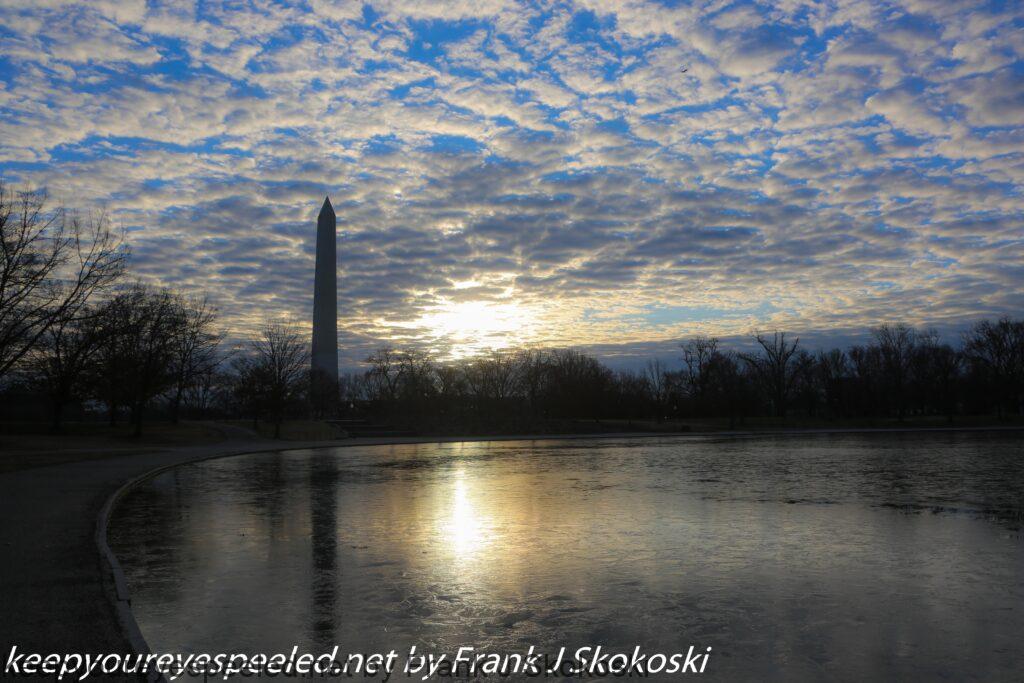 I awoke early in Washington DC on January 21,  the day after the Presidential  Inauguration. I hoped to be able to walk to the Lincoln Memorial. I wasn’t sure if I could get there because of the security measures put in place for the Inauguration. It was partly cloudy and a colder 36 degrees  when I began my walk on Rhode Island Avenue NW. 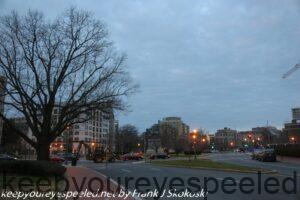 The city had come back to life. Traffic was heavy and there were many folks walking to work. Walking down 16th Street I soon encountered  road blocks preventing  automobiles access to the areas around the White House. 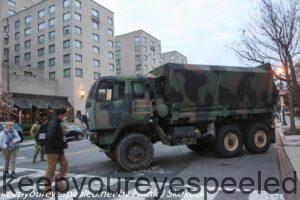 And then  security fences preventing any pedestrian access to these  areas. 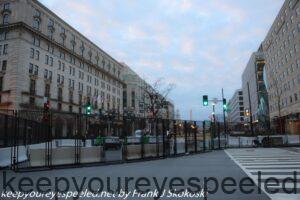 I wasn’t to optimistic about making it to the Lincoln Memorial but decided to ask a police officer if there was a way around the security fences. He told me he believed 17th Street was open and I quickly walked there to find out. 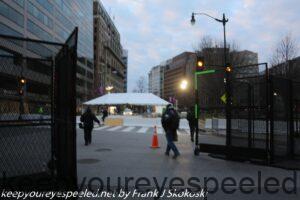 It was open! . The security checkpoints were still there but they were unmanned and I was allowed to walk through onto 17th Street. 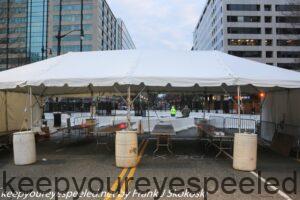 There was still a lot of police cars in the area but I was able to walk down 17th Street and toward the National Mall. 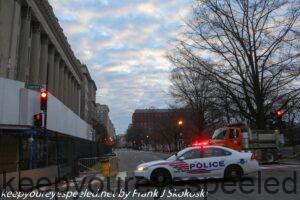 The White House would be a block east of 17th Street and I walked past the impressive Eisenhower Executive Office Building.  Built in 1871 it once housed the Departments of State, war and the Navy. It now was the location of many executive offices for the White House. 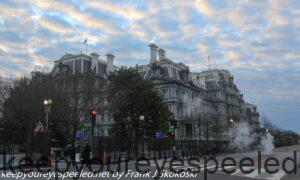 I continued south on 17th Street passing some more historic buildings including the National Headquarters of the American Red Cross. 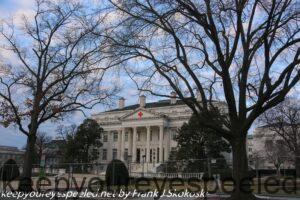 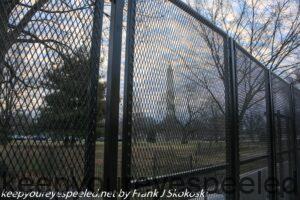 but the National Mall west was open! I was delighted. While attending law school at the Columbus School of Law at the Catholic University I would often visit the Lincoln Memorial.   Some visits were at night, with friends, after a few drinks, but most were in the day, by myself were I would reflect, in the presence of  the  Mr. Lincoln, on my life and future. I only  returned to Washington three times since my graduation from law school.  On two of those occasions,  President Trump’s Inauguration and the Fourth of July two years ago the Lincoln Memorial was closed to the public. 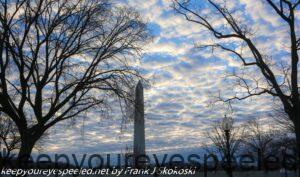 So I was excited  to finally have a reunion with President Lincoln for the first time in 38 years! As I walked toward the memorial I turned and caught a glimpse of the Washington Monument surrounded by clouds. 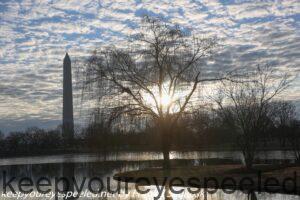 It was a beautiful  and inspiring scene. I posted it on social media and it solicited many hopeful remarks that is was a sign of healing for our fractured Nation. 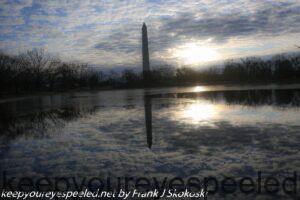 I walked under the bare trees of the mall toward the Lincoln Memorial. The sun now broke trough the clouds as, 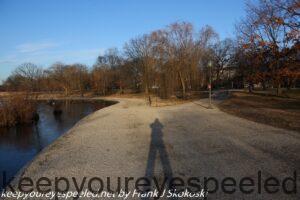 I passed the reflecting  ponds between the Lincoln Memorial and the Washington Monument. I encountered  few people me on this peaceful walk but there were some ducks on the ponds enjoying the morning sunshine. 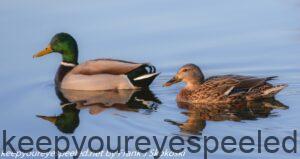 Finally, I approached  the impressive stone  tribute to President Lincoln and saw it through the trees. 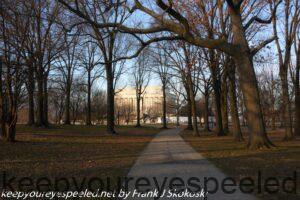 Many emotions were evoked as I approached this historic sight. The presence of National Guardsman guarding this sacred sight from our brother Americans who violently attempted to overthrow our Government and attack  and ravage our Capitol building added to these emotions. 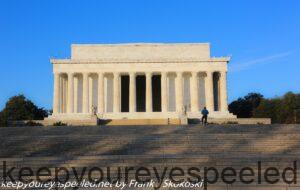 I watched a few Guardsman, apparently off duty, visiting the imposing statue of a sitting President Lincoln. It was a moving scene, watching these unsung heroes paying tribute to a man who tried to unite a divided Nation.

When I entered the Memorial only a few armed Guardsmen were present. They left, leaving me alone with with Mr. Lincoln. It was a scene I always treasured when, one of my favorite actors, Jimmy Stewart, stood here, alone, the Mr. Smith Goes to Washington. 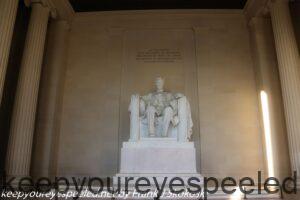 I sat on the floor across from the imposing figure of President Lincoln, and reflected on the events of the past few months, on my days in Washington and on my  future on this planet. There is a lot less of it since I last visited Mr. Lincoln. It was a very emotional and rewarding experience for me. I could have sat there for hours, but, alas, I had to leave and check out of my hotel. 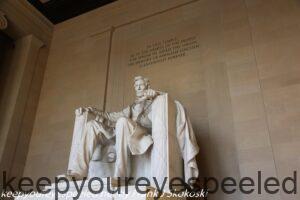 Walking down the steps of the Memorial I promised myself I will return, maybe in 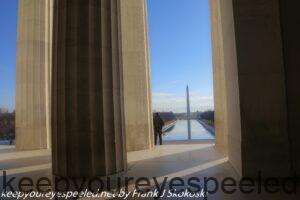 the Spring when the cherry blossoms are in bloom. It is a wonderful place to be when they are in bloom

On my return walk  along the National Mall I encountered a few more tourists, National Guardsmen and city workers beginning to remove the security fencing. I turned around for one last look at the Lincoln Memorial. 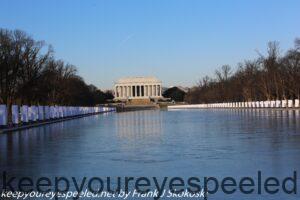 And I looked east at our Capitol, where our Democracy survived it’s greatest threat to its existence in over 150 years. Our National flags proudly fluttered in the breeze, replacing the flags pledging allegiance to a man and not our Nation, that flew there on January 6. Here is a link to a gallery on my website of more photographs of my visit to the Lincoln Memorial. Washington DC National Mall January 21 2021. 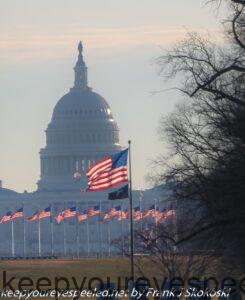 Leaving the National Mall I retraced my steps up 17th Street again encountering armed security checkpoints along the way, a reminder of what the insurrection did to our freedom. 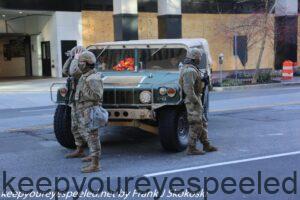 The city was getting back to normal once I got passed the security areas and both pedestrian and automobile  traffic was heavy. 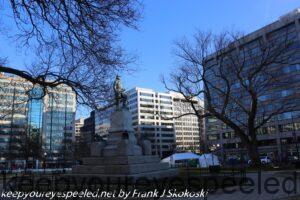 It was a reflective walk back to my hotel. I recalled my days of roaming the streets of Washington when I was a young law student, so unsure what life had in store for me. Now, so many years later I  know much of it. But there are a few chapters remaining. One of them I hope is to return to this beautiful and historic city in four years to attend my fourth Inauguration, hopefully with very little security. Here is a link to a gallery with some more photographs from my morning hike to the Lincoln Memorial. Washington DC Morning walk. January 21 2021. 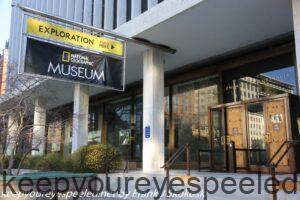 As I would not be a slave, so I would not be a master. This expresses my idea of democracy.” “I leave you, hoping that the lamp of liberty will burn in your bosoms until there shall no longer be a doubt that all men are created free and equal.” Abraham Lincoln 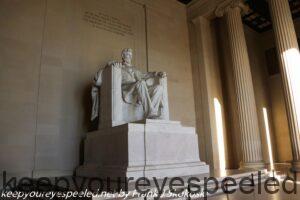