An Easter Morning Hike In The PPL Wetlands.

April 14, 2020 / fskokoski@gmail.com / Comments Off on An Easter Morning Hike In The PPL Wetlands.

An Easter Morning Hike In The PPL Wetlands. 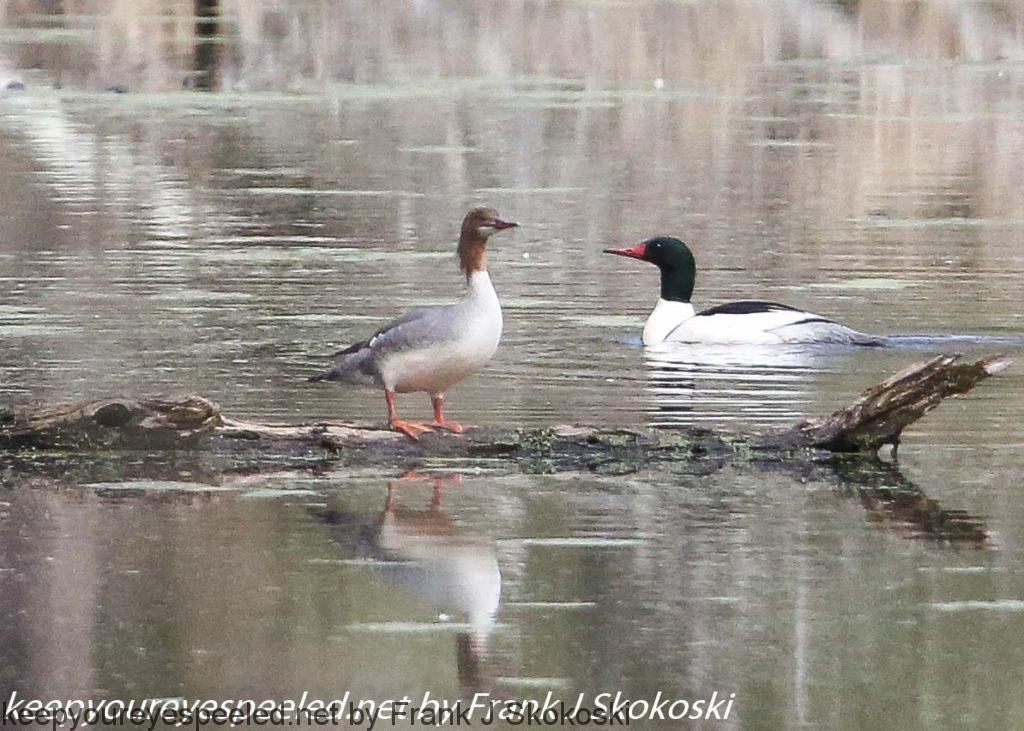 At one time my  Easter morning routine was to  visit my mom and dads house after church on Easter morning. We would always eat food from the blessed Easter basket followed by a game of rolling Easter eggs. Good memories they were. Mom and dad are gone now, and with social distancing in effect, I traveled to the PPL Wetlands to spend a quiet Easter morning service enjoying the beauty of Nature. A perfect place to celebrate the new life Easter represents. 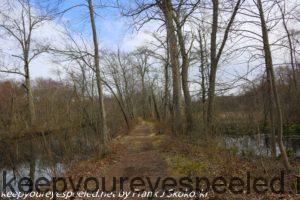 It was overcast but a seasonable 45 degrees when I arrived at the wetlands. Too chilly for the spring peepers and turtles to be active. However, I immediately noticed signs of the Spring and the new life it brings. As I walked along the trails I noticed that the trout lilies were now in bloom. 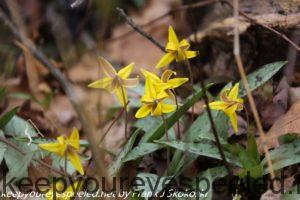 I love these yellow flowers. Unfortunately, they do not last long, a few short, but lovely days in April is  our only chance to see them during the year. 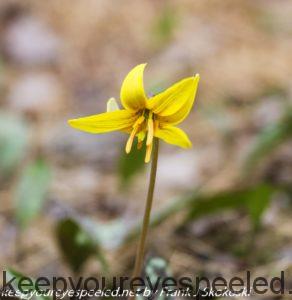 The skunk cabbage continue to grow and unfurl their bright green leaves  bringing life and color back to the drab Winter  forest floor. 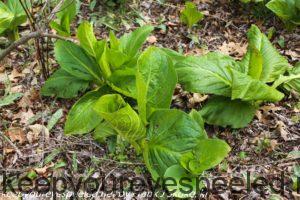 Another favorite  flower was sprouting up in the wetlands, the northern  blue flags, however, their pretty blue flowers won’t appear until June. 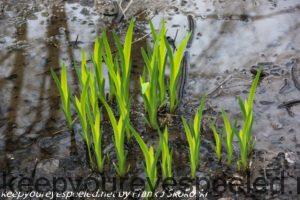 A pair of flickers were frolicked in the treetops, either fighting or mating or both. 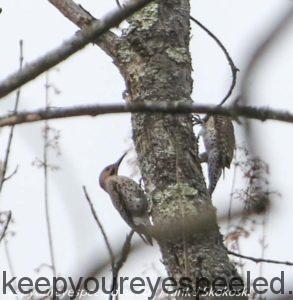 I was surprised to find one of the pair of  Canada geese  sitting on the nest I thought they abandoned. In my blog post last week I was sure they had given up on the nest.  It looks like I may have been wrong and they may still have a family this year. 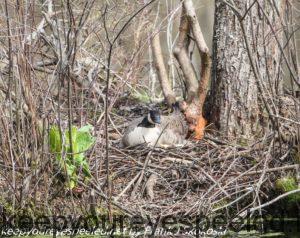 As I walked toward the river lands section of the preserve I saw two newcomers to the wetlands, the first an eastern phoebe. 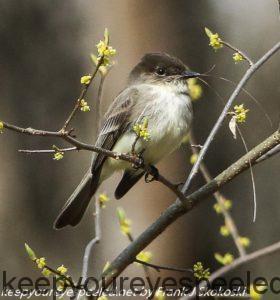 This pretty little bird  was in the process of gathering material for a nest. 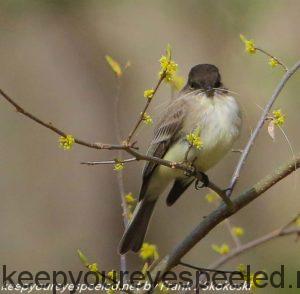 Another even smaller,  and just as pretty bird, a blue-gray gnatcatcher  was hopping on the tree branches above the trail. 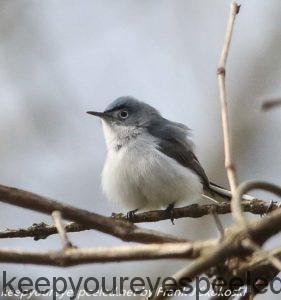 stopping every so often to sing a song. 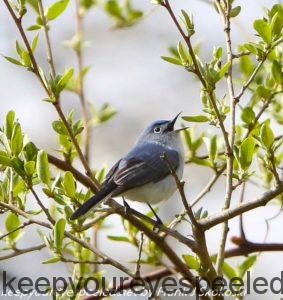 And I was in for an even bigger surprise, a pair of common mergansers were on one of the canals in the wetlands. I have seen many of them on Lake Took-A-While but never in the wetlands before. And, the female was standing on a log. She had a body! Usually only their heads are visible as they swim in the water, It was a nice sight to see. I am hoping they nest here in the wetlands this year. 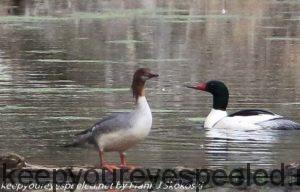 Making my way to the lake I heard a snort in the woods and saw this deer watching me. 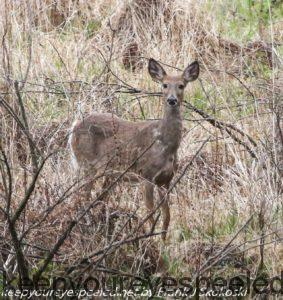 I continued on and came to the lake were I found  many fishermen enjoying a peaceful Easter morning. 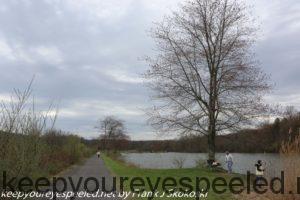 Walking along the trail alongside the lake, and maintaining my social distancing I finally was able to get a not so good photograph of the kingfisher that has been eluding me these past few weeks 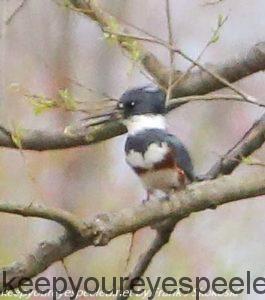 There were also woodpeckers searching for insects in the treetops.

I walked past the last and onto the river trail for about a half mile. Here I saw a Carolina wren singing a lot louder than you would think for such a small bird. 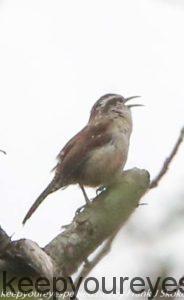 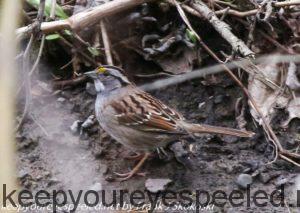 And there were more signs of  Spring, including these new leaves on an elderberry shrub.  There tiny berries will be enjoyed by animals and humans alike, but not until mid August. Sadly the berries always reminded me of the end of summer and a return to school. 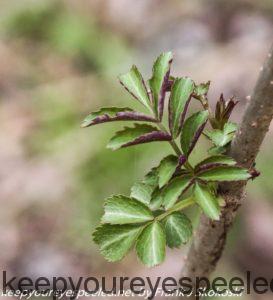 After hiking another 1/2 mile I began my journey back. Although the cloud cover remained,the wind was from the southwest and temperatures rose into the 50’s. 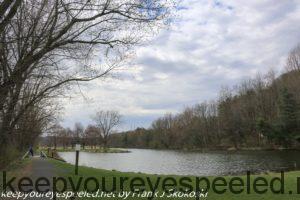 When i made my way back to the wetlands the warmer air brought out the turtles, 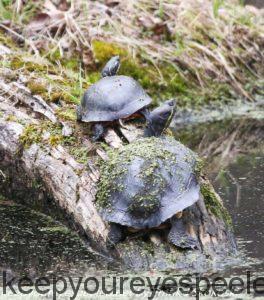 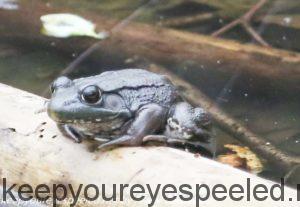 Once again I saw some wood ducks and they saw me too, however, this time I was able to get a quick photograph before they flew off. 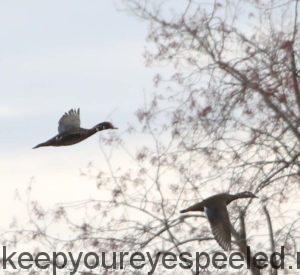 Easter morning wasn’t the same for me again this year, it never will be again I guess, but it was nice spending it in the wetlands with the beauty of nature around me.  The message of new life arising from the old is very easy to understand out here. Here is a link to a gallery on my website with more photographs from my hike PPL Wetlands April 12 2020. 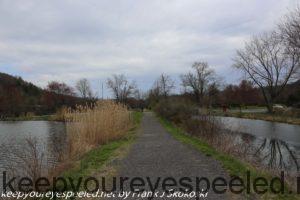 Our Lord has written the promise of resurrection, not in books alone, but in every leaf in springtime. Martin Luther 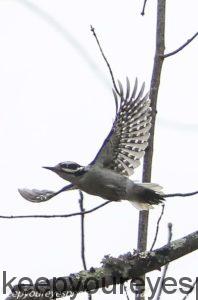