Another Morning Walk In Philadelphia: This Time West Of Broad Street

November 3, 2018 / fskokoski@gmail.com / Comments Off on Another Morning Walk In Philadelphia: This Time West Of Broad Street

Another Morning Walk In Philadelphia: This Time West Of Broad Street 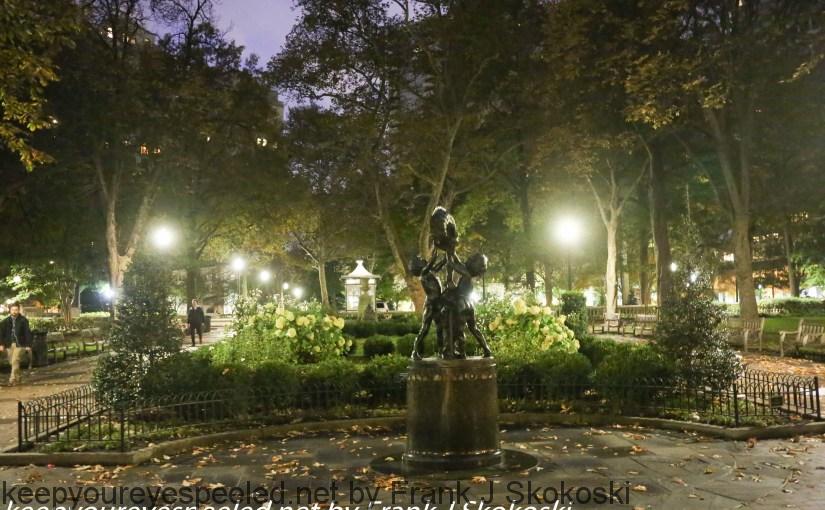 It rained  during the night, but, it had stopped when I awoke early Friday Morning.  I was glad to be able to get my daily morning walk in without having to put on my rain gear.  It was a very mild November morning, with a temperature of 70 degrees, when I left my hotel at around 6: 30 a.m.

Even at this  hour the taxis were lined up at my hotel, taking tourists and businessmen to  their early appointments and destinations.

On Friday I decided to walk on the western side of Broad Street, the main thoroughfare that divides the city.  It is also the location of the majestic City Hall.

Even at this early hour the streets were busy with commuters rushing to work.

I walked with the stream of people  to Walnut Street, where I followed it to Rittenhouse Square. Unfortunately, there were many homeless folks sleeping on the streets. It is sad enough on these mild nights but tragic in the freezing temperatures of Winter.

As I walked I observed signs, statutes and landmarks that took on a different  look in the morning darkness.

I walked into Rittenhouse Square and also found an entirely different look then when I visit in daylight hours.

The statues took on a surreal look.

I wasn’t the only one in the Square, there were a number of homeless people on the benches and a lot of local residents walking their dogs.

I left Rittenhouse Square and made me way to the residential areas near Pine Street.

The streets again took on a spooky look as the leaves on the many trees reflected the arc lights.

I roamed the  charming neighborhoods, and observed almost all of the homes were decorated for Halloween and Thanksgiving. It seems the residents take great pride in their neighborhoods.

I made my way back to Broad Street, which now was a lot busier than my earlier crossing.

I walked back to my hotel observing the sign in the illuminated shops,

and businesses along the way. I just want to see everything.

It was getting light now and I certainly could have spent the entire day exploring the city. However I had another long day with an 8 hour seminar. But I was still glad to have had the opportunity for my morning walk. Here is a link to some more photographs from my morning walk. Philadelphia morning walk November 3 2018.

There are dark shadows on the earth, but its lights are stronger in the contrast. Charles Dickens