February 17, 2016 / fskokoski@gmail.com / Comments Off on Australia Day Nine: Nullarbor Plain And The Ghost Town Of Cook 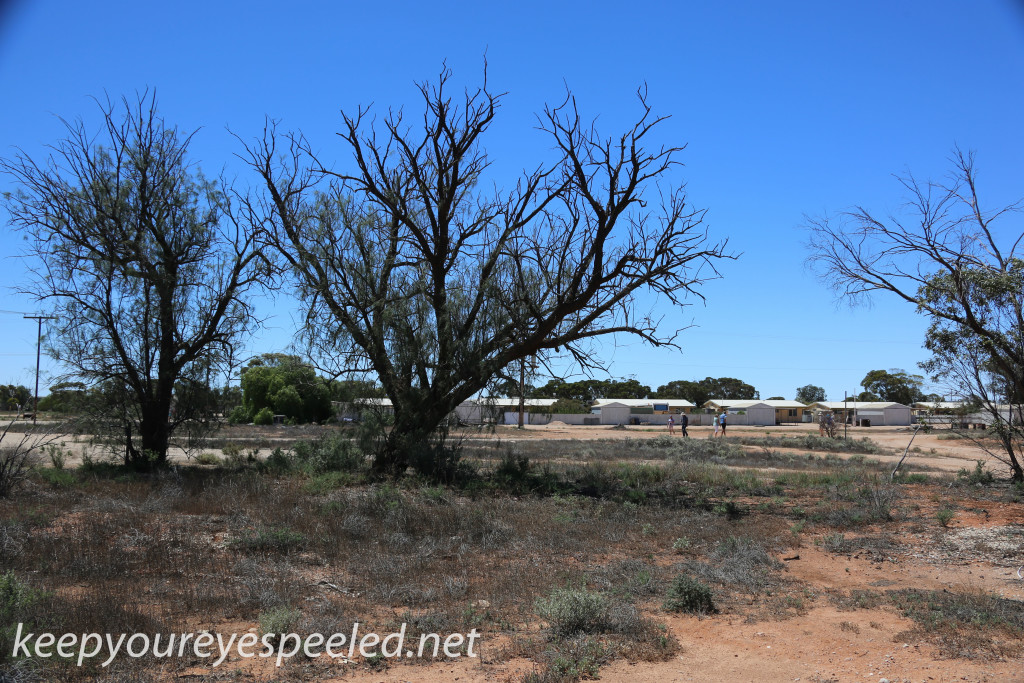 On my second night on the train, I decided to leave the shades in my cabin open so I could fall asleep with the bright stars shining  in the dark Australian sky. I couldn’t make them out at the time, I was facing South and I am not familiar with the southern Constellations, but I enjoyed them all the same. .  I fell soundly asleep again, only to be awakened by the sound of voices outside my cabin in the middle of the night. . We had stopped, in Port Augusta I think,and the workers outside were re-supplying the train.   I enjoyed seeing the strange town in the middle of nowhere  outside my window.  I fell back into a sound sleep until shortly before sunrise. I got up and walked to the lounge to try and watch it rise. I sat and watched the sky brighten, as the sun appeared on the horizon. It was a beautiful sunrise, as they all. I thought how, back home, my family and friends were watching it set in the west as they ended their day. 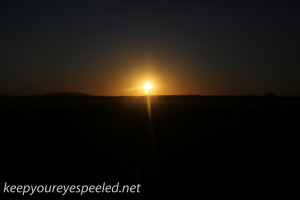 I sat down, had a cup of tea, some guitar music from a fellow passenger   and enjoyed the passing scenery. We were now in flat lands  again, approaching the Nullarbor plain. Sometimes the landscape was   treeless and others was  covered forest of medium sized trees , shrubs or low lying desert vegetation.  There was always with a bright red soil  underneath. 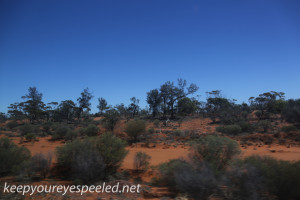 No kangaroos, sheep or cattle now, just the occasional bird. And, this beautiful wedge tailed eagle, the symbol of the Indian Pacific. It isn’t the best photograph but it still was an awesome sight to see one of the magnificent creatures soaring over the Australian outback. 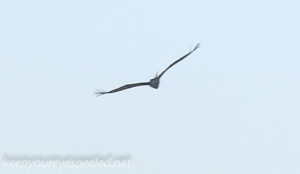 Some folks may say the landscape was boring and not interesting but I enjoyed the subtle changes in the colors of the soils, the variety of the trees and was rewarded with the occasional bird or some interesting new landscape, such as a number of  large salt lake we passed.  here is a link to some more photographs of our through the outback that morning. https://keepyoureyespeeled.net/australia/nggallery/australia/australia-day-nine-indian-pacific-adelaide-to-cook-february-12-2016 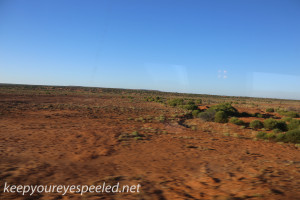 I sat, enjoyed the scenery, and listened to the folk music and tales of the outback on the trains radio station.  We stopped  to refuel at the once booming town of  Cook, now largely abandoned with a population of four. They live here to  service the Indian Pacific train. 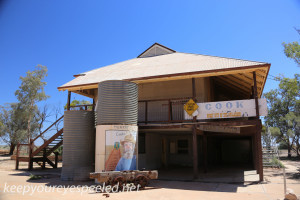 It was hot when we departed the train for our half hour excursion, temperatures were in the mid 90’s, but it didn’t stop us from exploring the deserted building. 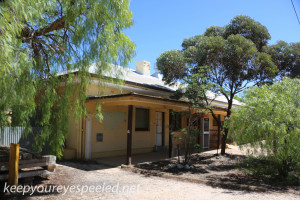 The town once had over 20,000 inhabitants but they left when the trains changed ownership, leaving behind many of the building on the Nullarbor Plain. The school seems like it just had students yesterday. 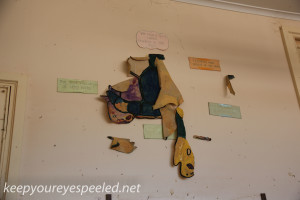 I wondered about the lives of the folks who were born and grew up in this isolated town in the Australian outback. It was surely a different life than most folks lead but I am sure the beauty of the outback was ample reward for the isolation . Here is a link to some more photographs from our visit to Cook. https://keepyoureyespeeled.net/australia/nggallery/australia/australia-day-nine-indian-pacific-cook-february-12-2016 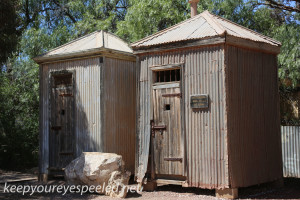 We boarded the train and I went back to what had become a favorite activity, just watching the scenery as we proceeded along. 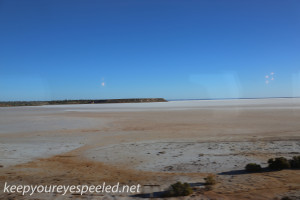 We pulled over at the Rawlinna station, at sunset,  where a meal was prepared for us under the desert  sky. The food, and entertainment were superb as we dined under the sparking Australian stars. 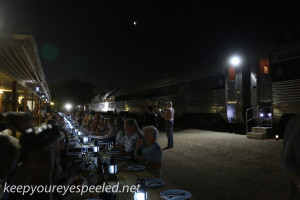 It was a great evening and some newly made friends took me aside and pointed out the Southern Cross. I still am awed by the sight of the Milky Way in the Southern Hemisphere. I also love looking at Orion, now in the northern sky and upside down from how I always saw it. We boarded the plan and I fell into a sound sleep recalling the events of another great day on the Indian Pacific as it traveled onward to perth during the night. . Here is a link to some more photographs of  our ride from Cook to Rawlinna. https://keepyoureyespeeled.net/australia/nggallery/australia/australia-day-nine-cook-through-rawlinna-ride-february-11-2016On m

…what thrills me about trains is not their size or their equipment but the fact that they are moving, that they embody a connection between unseen places.”
― Marianne Wiggins