September 22, 2018 / fskokoski@gmail.com / Comments Off on Autumn Arrives But It Still Looks A Lot Like Summer At The PPL Wetlands 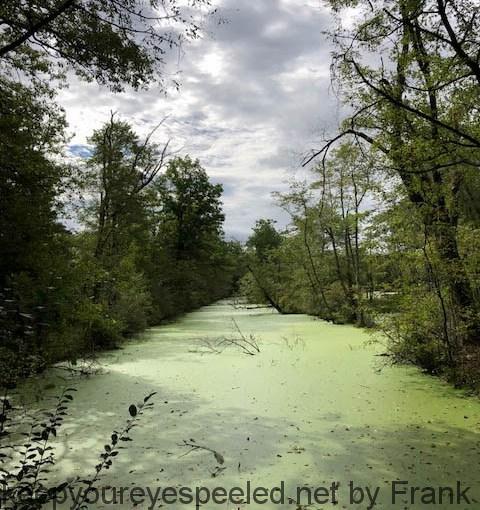 Autumn arrives today in the Northern Hemisphere. And here in Northeastern Pennsylvania the weather was fall-like with overcast skies and temperatures in the upper 60’s. However, the warm  weather we  have had   has extended Summer this year.  I hiked in the PPL Wetlands and found almost all of the trees are still clinging to their green leaves.

In most  years the many of the trees would have already began to show some of their fall colors by now. Not this year. Most of the  trees in the wetlands and along the Susquehanna River remained green.

There were, however , some color, as the   leaves were turning yellow on  some of the bushes along the still flooded  trail. There was a path here a few weeks ago.

And there were still many  signs that Summer was ending. The woodlands were much quieter. Most of the song birds have left and the cicadas were silent.  I saw no turtles or frogs, And fortunately the swarms of mosquitoes were now gone. And I saw no hornet activity near this large hornet nest.

There were still some birds in the wetlands including a black and white warbler,

and this one I haven’t been able to identify.

There were still some wildflowers in bloom,

as well as many berries and fruits produced throughout the Summer and finally ripening  as Autumn begins, including the poke weed berries,

the fruit of the jack-in-the pulpit and

these pretty blue berries I haven’t been able to identify. Any help will be appreciated.

There were no dragonflies near the waters of the wetlands. There were some bees

and yellow jackets but they were lethargic, flying very slowly from flower to flower.

I walked from the wetlands to the Lake-Took-A-While,

where I saw this cormorant on the lake.

I began my return hike under the cloudy skies,

and encountered this deer along the way. I didn’t see anything unusual or exciting on this hike but I still enjoyed the many common, and often overlooked, wonders of nature. I am sure when I next visit the wetlands the colors of Fall will be much more apparent. Here is a link to some more photographs from my hike. PPL Wetlands September 22 2018.