Back In Philadelphia For A Short Visit. A Couple Of Walks Through It’s Many Neighborhoods.

December 2, 2018 / fskokoski@gmail.com / Comments Off on Back In Philadelphia For A Short Visit. A Couple Of Walks Through It’s Many Neighborhoods.

Back In Philadelphia For A Short Visit. A Couple Of Walks Through It’s Many Neighborhoods. 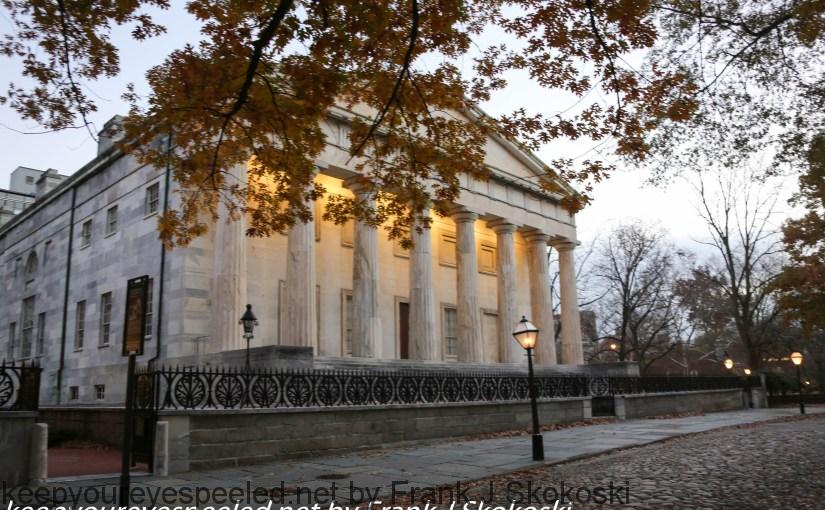 I returned to Philadelphia to attend a legal seminar this past week. It was scheduled in the afternoon, and only lasted three hours, but I decided to spend the night in the city.

After the seminar ended late in the afternoon I checked into the Warwick hotel on S. 17th Street and I was soon off for a twilight walk through the streets of my favorite city.

I chose  this hotel since it is near Rittenhouse Square one of my favorite neighborhoods in the city. I walked through the busy streets of the evening rush hour. My hotel was  about one block  from  the square.

As usual it was crowded with commuters, people walking their dogs, tourists  walkers and joggers.

I walked east toward the Schuylkill River on Locust Street. I had never visited this area off the city before. I blended in with the steady stream of commuters returning from work to the large condominiums near the square or the quaint old brownstone homes further away on Locust Street.

Once again I encountered the horrible smell of the fallen fruit of the female ginkgo trees planted along the street. I love these ancient trees, and have one  in my front yard,  fortunately it is a male tree.

It seems that this was once an older, poorer neighborhood that is being renewed and revitalized.

Locust Street ended in a nice little park along the Schuylkill River appropriately named Schuylkill Park.   We are only three weeks from the winter solstice here in the Northern Hemisphere and so the sun was setting around 5 p.m. in Philadelphia.

I walked through the park as dark descended on the city, passing empty basketball courts and crowded dog-walking areas on my way to the river.

I walked along the river, reflecting on the many changes that took place along its banks  since the city was founded over three hundred years ago.  I am sure these brightly illuminated building would have surprised William Penn and the other founders of the City of Brotherly Love.

I walked up a bridge to Chestnut Street, again blending in with the evening commuters returning home.

I then walked back toward Rittenhouse Square on Samson Street passing some quaint little Italian restaurants.

I walked through the Square and back to Walnut Street were I found man playing on of my favorite songs, Those Were The Days by Mary Hopkins.  He was happy to play it again, after, of course, I provided him with a little monetary incentive.

I returned to my hotel after my walk, showered, and returned to one of the little Italian restaurants I passed on my walk, Porcini. I enjoyed a nice meal of pasta and calamari and returned early evening to my hotel.  Here is a link to some more photographs from my evening hike. Locust Street hike November 28 2018.“

I was up early the next morning since I wanted to take  another quick walk through the city before my return home.  It was clear and a seasonably cold 35 degrees when I set out west on Walnut Street in the morning twilight.

I once again strolled the familiar streets of Philadelphia, watching the city come to life.

The streets already had a steady flow of morning commuters on the sidewalks and  garbage and delivery trucks  on the streets.

I walked past the now closed shops near Broad Street and

continued past Jefferson Hospital  on Walnut Street in the morning twilight,

under the waning moon.

It was getting light when I arrived at the Birthplace of Our Nation, Independence Hall. As I have stated in earlier posts, I always become reflective standing in front of this building.

I wanted to watch the sunrise over the Delaware River but walked on the wrong street. This was as close as I could get to see the sunrise.

I walked back on Walnut Street and past this old Philadelphia favorite, Bookbinder’s Restaurant. I enjoyed many  a good meal here when it was open. .

I proceeded to Locust Street and made my way back in much more traffic, both motor vehicle and pedestrian .

I arrived at my hotel near 8 a.m. and soon checked out. Unfortunately  I found myself in the rush hour traffic on my drive home, but the delay was a small price to pay for another visit to this wonderful city.  Here is a link to some more photographs from my morning walk.  Walnut Street morning walk November 29 2018.

“Cities, like cats, will reveal themselves at night.”
― Rupert Brooke