April 9, 2018 / fskokoski@gmail.com / Comments Off on Frigid Temperatures Didn’t Keep The Birds From Returning To The PPL Wetlands 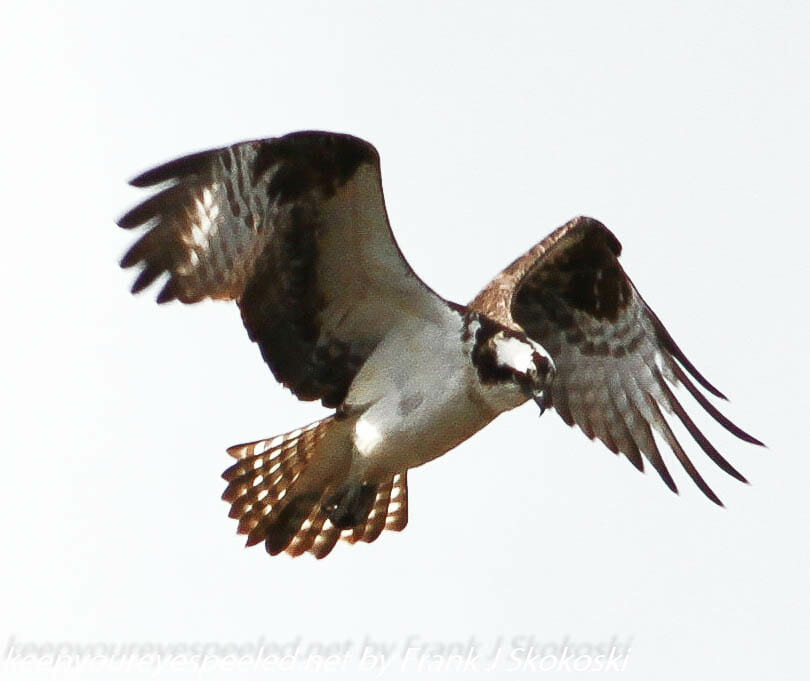 Although the calendar  says it is the second week in April, it felt more like January here in Northeastern Pennsylvania Sunday morning. The temperature dropped to 21 degrees. Still, it is Spring and I drove to the PPL Wetlands to see if any more of the migratory birds returned to our  area. They are usually on time. 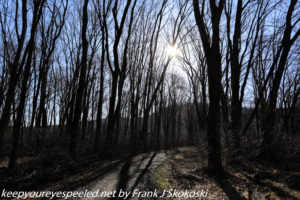 The air was cold but the skies clear and the April sunshine soon started warming up the wetlands.  The cold weather we have had this year has stunt 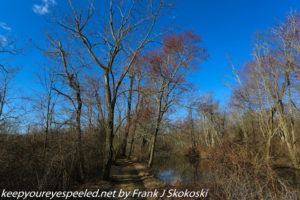 ed the growth of the plants, flowers and trees.

In addition to the skunk cabbage, only the red maple trees were showing signs of Spring and  putting forth their red buds. 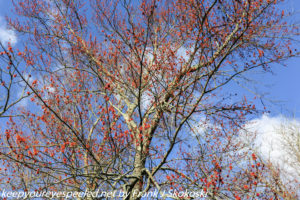 The cold did not deter the return of the birds. I saw my first song birds,  palm warblers, singing and hopping from tree to tree throughout the wetlands. 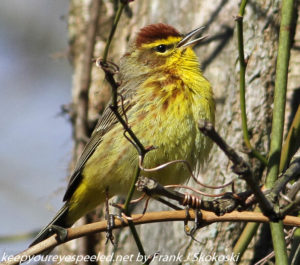 Warblers are such beautiful birds and so many different species visit and live in our woods. I wish I had learned to identify them when I was younger. A lot of my identifications come from my nephew and my friends on the Luzerne County birding Facebook page. Thanks again folks! 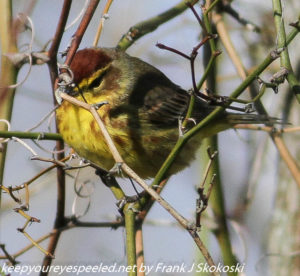 The palm warblers weren’t the only birds that returned to the frigid wetlands. The were many flycatchers in the trees, including this fellow,  I think an eastern phoebe. 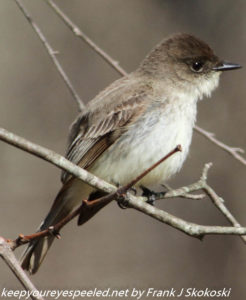 And there were hundreds of tree swallows skimming over the waters of on of the ponds. 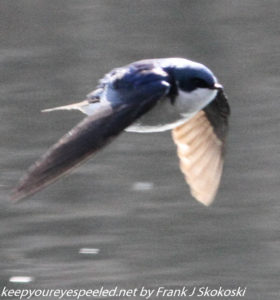 Many of the migrating ducks that were on the ponds left the wetlands but a few wood ducks remained. I am glad, they are beautiful birds. 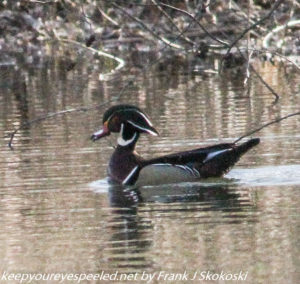 The pair of nesting Canada geese were still around and I am pretty certain I will be seeing some goslings soon. 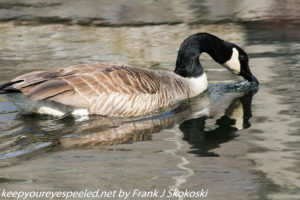 I also spooked a number of great blue herons. Most of them quickly took off into the tree tops before I could capture a photograph. I did capture this one standing  in a tree top. 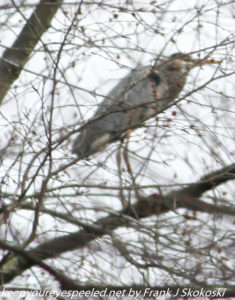 As I continued my walk I was overwhelmed by the many birds fluttering about. The palm warblers, phoebes and swallows were joined by many of the year long residents including a few red bellied woodpeckers, 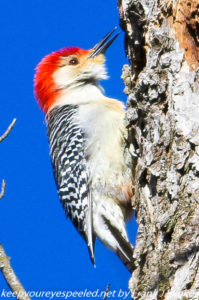 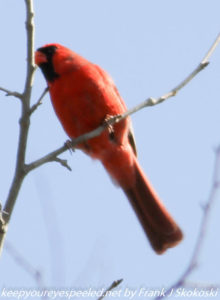 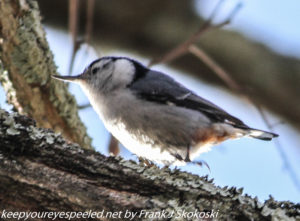 As I was trying to photograph these birds I looked up and was surprised and delighted to see  a brave crow attacking an immature bald eagle!!!

The eagle  was three times the size of the crow  but the crow looked like it was winning this battle. What a wonderful experience it was. 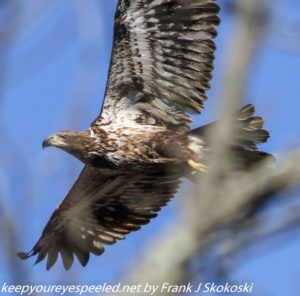 As I walked along the wetlands the sunshine warmed the air and the temperatures climbed into the 30’s. Once it was above freezing I heard a few of the spring peepers braving these frigid and below average temperatures. 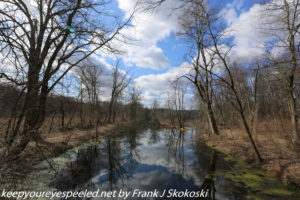 I walked over to the river lands section of the preserve hoping to see some water birds and possibly another bald eagle. No eagle but I did see this  osprey which returned to Lake Took-A-While. 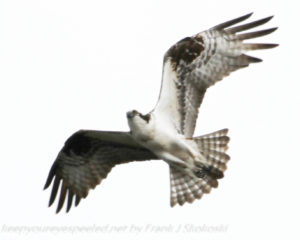 It  continually flew from one side of the lake to the other  competing with the great blue herons, the bald eagles, 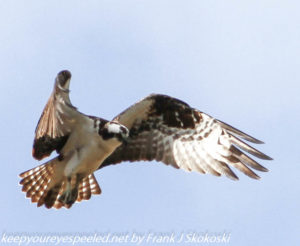 and these birds, the belted kingfishers , for the fish in the lake. Here is a link to some more photographs of the osprey. PPL Wetlands Osprey April 8 2018 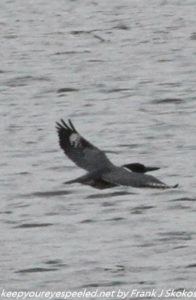 Clouds moved in while I was walking along  Lake Took-A While. Temperatures dropped almost immediately. 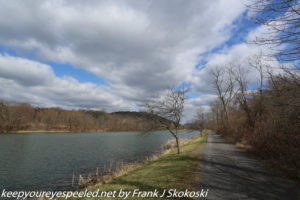 And a strong northwesterly wind made it feel colder. Unfortunately not only did this make my walk less pleasant, it also caused a decrease in the bird activity. 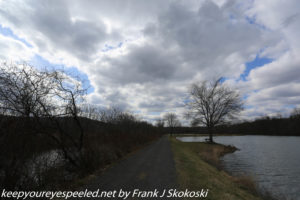 I decided to walk back.  On the way, I a lot fewer  birds  fluttering in the trees. I don’t think they liked the cold either.  I did see a few more Canada geese on the lake, and a few common mergansers.

There was also a flock of double-crested cormorants swimming on, and flying over, the lake. 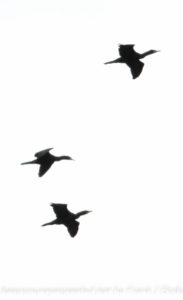 I walked back into the wetlands and also found a pair of coots swimming on one of the canals. 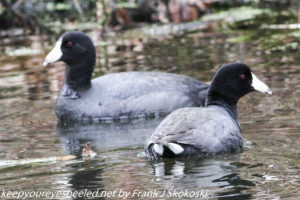 Unlike the ducks, these birds do not scare easily. They were content to let me watch them feed on some aquatic plants and take their photographs. Here is a link to some more photographs of the coots and other birds I saw on my hike. PPL Wetlands birds April 8 2018. 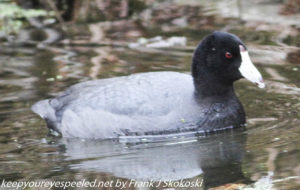 It was a cold hike, and ended colder than it started, but it was still Spring and the birds are making there way back to Northeastern Pennsylvania. They always do. And  I am glad for that. Here is a link to some more photographs from my hike in the wetlands. PPL Wetlands April 8 2018.

We do not ask for what useful purpose the birds do sing, for song is their pleasure since they were created for singing. Similarly, we ought not to ask why the human mind troubles to fathom the secrets of the heavens … The diversity of the phenomena of Nature is so great, and the treasures hidden in the heavens so rich, precisely in order that the human mind shall never be lacking in fresh nourishment.
— Johannes Kepler
Shares