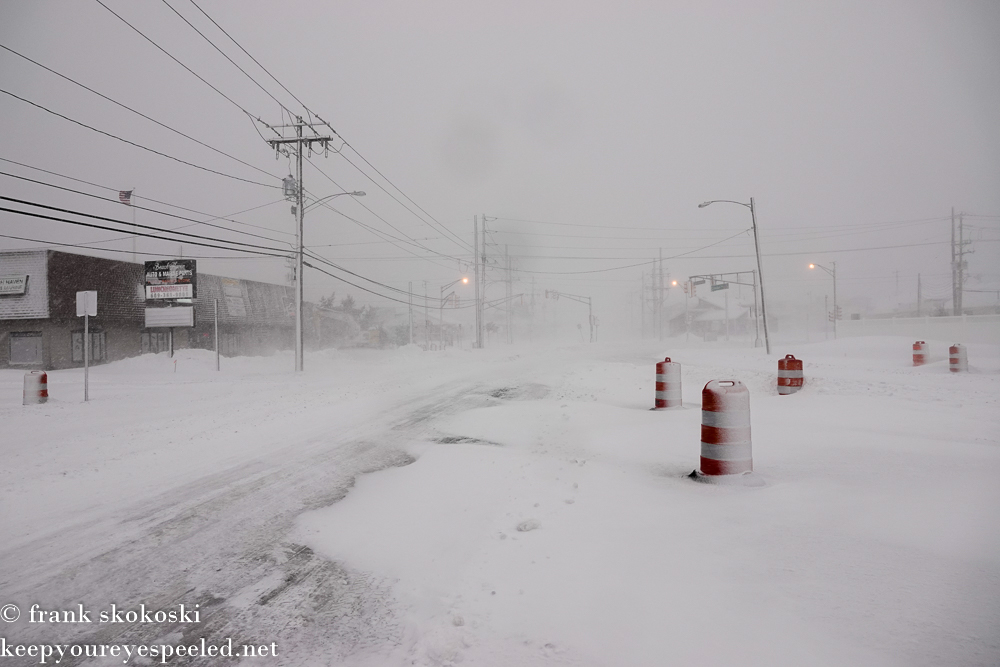 It was a last minute decision.  But I am so glad I made it. On Friday morning I decided to leave my home in Hazle Township in Northeastern Pennsylvania and drive the three hours to Long Beach Island on the New Jersey shore. They were predicting a Nor’easter with blizzard like conditions. I have always wanted to see  snow on the beaches of the Atlantic Ocean.  I thought this would be the time to cross this item off my bucket list. I arrived  at  my hotel on Long Beach Island around 2;30 Friday a took a five mile hike in  a nearby wildlife refuge. More on that can be seen in my previous blog post. Here is a link.    https://wp.me/p5GeDV-OFx   After a delicious meal at the famous Black Whale restaurant I  fell asleep early that evening . I didn’t sleep long. My anticipation to see the storm  had me getting  up around 11pm when I heard  the wind being to pick up outside. . Looking out my window at the LBI Hotel in Ship Bottom I saw the snow had started to fall. 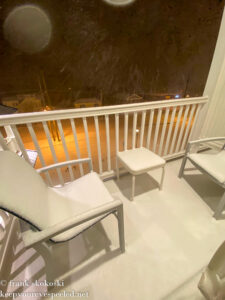 And it  would continue to fall throughout the night. The winds intensified  and howled outside my third floor window. I woke  up a few times to  observe the blizzard conditions  outside. And, around 3 a.m. , I was up again this time a  fire alarm went off sending me and the other guests to the parking garage on the ground floor. It was a false alarm but added to the excitement  of the  storm raging outside. 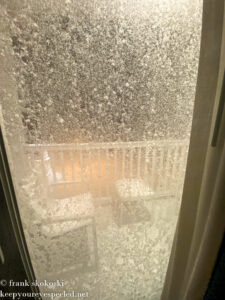 Eventually we returned to our rooms and I get a few hours sleep. I awoke around 7 a.m.  to find strong winds blowing over seven inches  of snow across the island.  It looked nasty. But I wasn’t here to just look at it, I wanted to experience it, so after a cup of coffee I changed into my winter gear and headed outside. 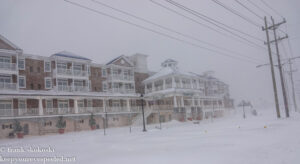 The wind was fierce. It was blowing at a constant 25 mph with gust up to 50 mph. The powdery snow swirled in the wind creating two foot drifts. I was surprised that find the main highway , Route 72, was snow covered, but open. The Ship Bottom road crew were doing a great job plowing the drifting snow. 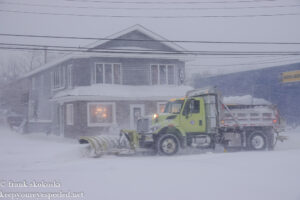 Of course, as I always do on my hikes during snow storms here in Northeastern Pennsylvania I decided to take advantage of the plowed highway and follow it down to the ocean. I didn’t get very far. The local police officers on patrol advised me I could not walk on the highway. 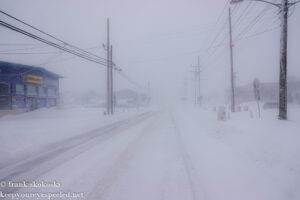 Well the side streets were not plowed so I had no alternative but to trudge my way through snow and snow drifts on  the sidewalks. 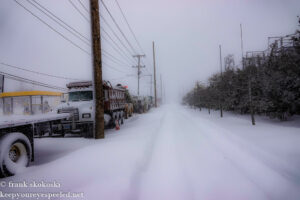 I struggled through the drifts with the howling wind at my back. It still blew the snow into my face. It wasn’t a pleasant hike to the ocean. 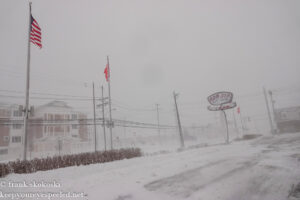 Despite the cold, snow and wind I was still able to take some photographs of this beach community covered in snow. 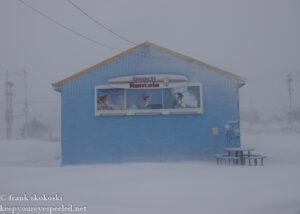 It was a struggle and challenge but I found it interesting seeing the shops, 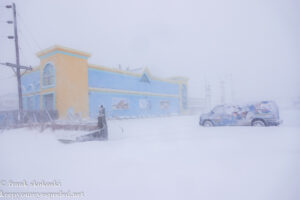 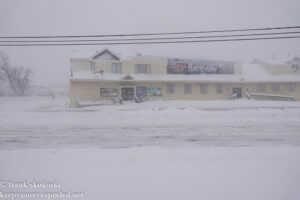 and vehicles  advertising summer weather activities, covered in snow. It is not something  the folks who live here see too often and is something I have never seen before. 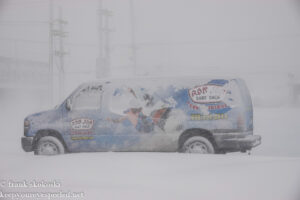 It was about a half mile walk to Long Beach Blvd. one of the main avenues  that runs north to south on the island. 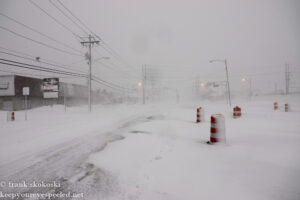 Most folks who visit here in the warm summer months will probably not recognize this street. I hear it is congested with automobile  traffic during the peak season.  I didn’t see a  private vehicle on my entire frigid hike. 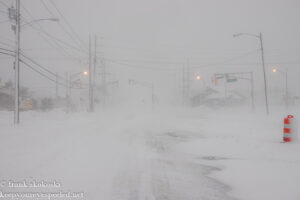 In fact I only saw one other person on my walk, this gentleman entering a 711 store that remained open during the blizzard.

I was now near the beach and found   one of the access ramps that led to the beach. I struggled climbing up the  snow covered stairs. 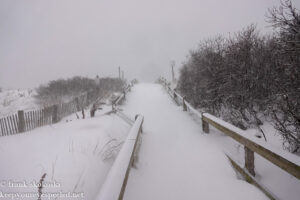 The drifting snow was knee high and, at times, up to my hips. 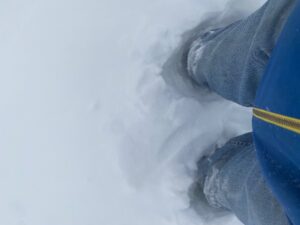 It was a struggle reaching the top of the ramp, and when I did, the wind became more intense. It was now difficult to use my camera. The salt spray from the ocean instantly froze my exposed fingers and my face was freezing. I decided to take a video of my experience walking down to the ocean. Here is a link to a video I uploaded to my YouTube channel. https://youtu.be/2k5aOdeMgRY 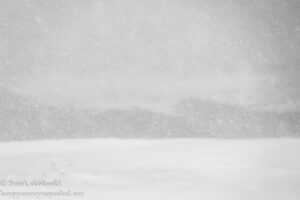 I wanted to see the waves and  the ocean so I struggled  through the drifting snow and made it to the shoreline where I watched the  raging sea. It was a frigid but fabulous experience. It was a primeval feeling. It  seemed the winds  were coming from every direction, swirling down the coast and off of the ocean. The salt water spray  instantly froze my face and exposed fingers as I took a video of the raging ocean and crashing of it’s waves on the frozen shore. It was hard to take all in at the time.  It just felt threatening as I felt the snow, salt spray and wind  freeze my body. I did take another video of the blizzard conditions and I am glad I did, so I could share and remember the awesome power of a nor’easter. Here is a link to another video I uploaded to my YouTube channel. https://youtu.be/alC46AxnVRw 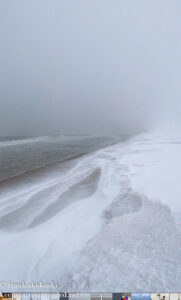 These next two   photos where from the video. I didn’t take any more photos with my camera. I was already frozen from my experience at the at ocean’s shore. I soon realized my return walk would be a lot harder then my walk to the ocean. I was now walking into the steady 30 mph wind.  It gusted up to 50mph.  It was a real struggle walking back to my hotel. I was in survival mode . 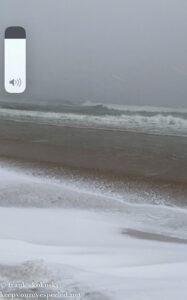 My face was exposed and freezing. The drifts were a struggle as 3/4 mile hike back to the hotel. I had walked in conditions like this in my younger years in Northeastern Pennsylvania, but I  am not young anymore.  If I had seen a police car I would have asked for a ride. I didn’t and  I was very glad when I finally made it back to my hotel. It was a difficult walk but I would do it again in a second. I was glad to finally experience snow on the ocean. And I got the full effect walking in the blizzard. Here is a link to a gallery on my blog website with  more photos from my morning walk in Ship Bottom on Long Beach Island during   the coastal blizzard of 2022. Long Beach Island blizzard morning walk January 29 2022. 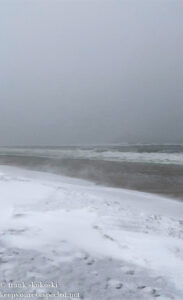 At the hotel I stopped at the front desk before returning to my room. I learned that the hotel restaurant would be closed for breakfast and lunch. I was starving so  purchased these snacks at the shop in the lobby. I rarely eat this stuff but it sure was better than nothing. I returned to my room and watched and listened to the storm rage outside while i edited my photos and worked on my blog. I was completely happy with my decision to make the trip and watch nature unleash it’s fury on the Jersey shore.

Few things are as democratic as a snowstorm. 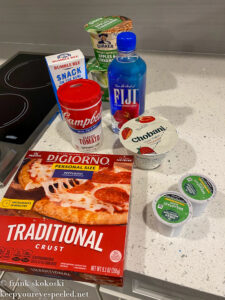