Clouds, Heavy Rains And An Otter At The Susquehanna Wetlands

July 13, 2021 / fskokoski@gmail.com / Comments Off on Clouds, Heavy Rains And An Otter At The Susquehanna Wetlands

Clouds, Heavy Rains And An Otter At The Susquehanna Wetlands 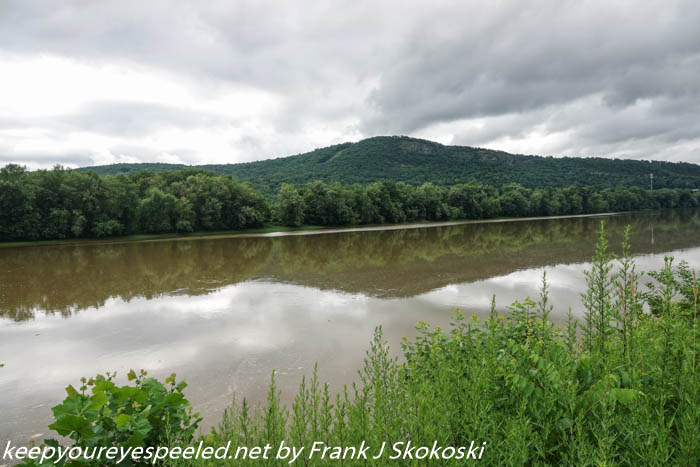 It was muggy  and overcast  last Saturday here in Northeastern Pennsylvania. It rained during the night and more heavy rains were  in the forecast for the day.  I decided to take a chance and head to the Susquehanna Wetlands in Salem Township, Luzerne County anyway.   I don’t like to miss an opportunity to try and see, and photograph,  the many critters that live there. 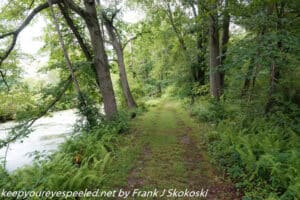 When I arrived  it was still overcast. But, I was actually surprised when a few peeks of sun broke through the clouds. After leaving my Jeep, I  walked down to the river. I wanted  to see how the much the recent rains affected it the water level .  It was  was considerably higher than my last visit. 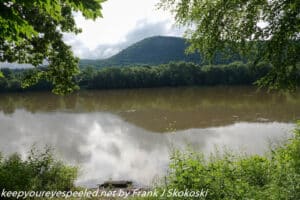 Leaving the river, I walked into the wetlands and found them still  wet from the heavy rains that fell overnight. 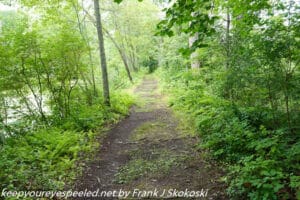 The rabbit that I have been seeing these past few weeks was  in his same spot again, munching on clover. . 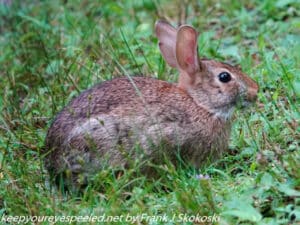 Nearby I saw this chipmunk popping it’s head up from behind a log. 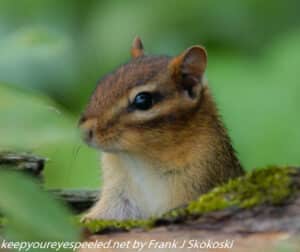 And I finally can prove that squirrels like mushrooms too.

For years I would find mushrooms in the woods that that have been chewed on by some critter. I always suspected a squirrel or a chipmunk.  On Saturday I saw this fellow nibbling on some species of russula mushroom. 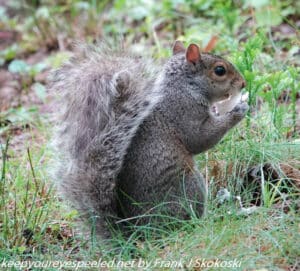 And soon after seeing  these two critters I saw a furry head in the water and assumed it was a muskrat. It was partially hidden behind some branches. I soon noticed it wasn’t a muskrat and it wasn’t alone. It was an otter and I believe there were some young ones with it. Unfortunately, they dived under the cover of the duck weed and this was the best image I could get. I have seen otters in the river before but not many in the canals in the wetlands. I hope to see one again this Summer and get a better photo. 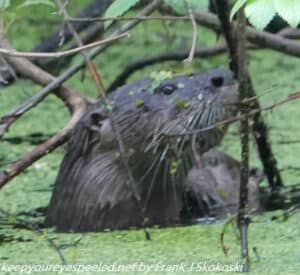 As usual I walked to the water fowl pond but found the trail  under water from the heavy rains. Last week this was a trail. 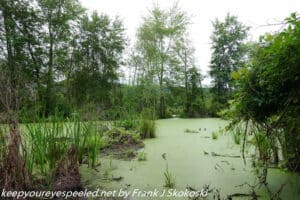 On the way toward the river I again saw a couple of woods ducks in the distance on another pond. 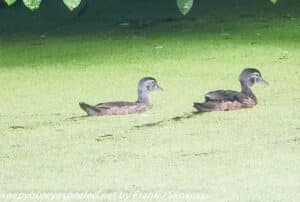 And as usual the wetlands echoed with the chatter of the catbirds, 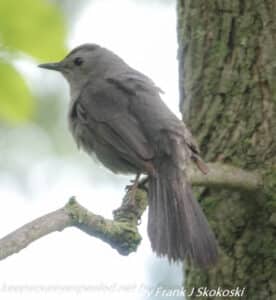 and red-winged blackbirds. This is a male, 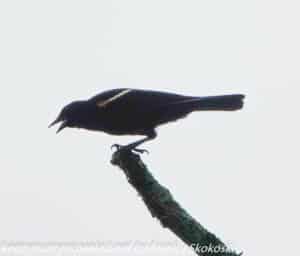 and this a female. 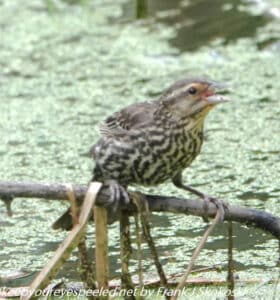 The clouds moved in again and darkened the wetlands, making it difficult to see and photograph the birds singing high in the tree tops. I was, however, able to get this photo of a green heron perched in a tree. 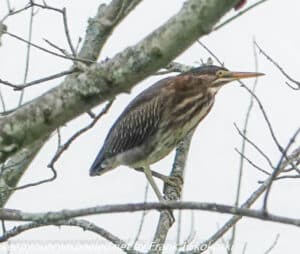 Once again I saw a few muskrats and their young ones feeding on the duck weed on the ponds and canals in the wetlands. 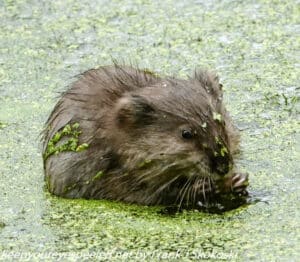 Leaving the wetlands I found this pretty Berkeley polypore mushroom growing beneath an oak tree. 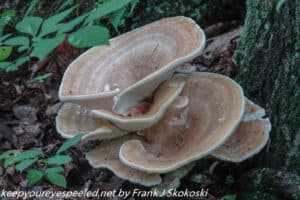 There were also some milker mushrooms, 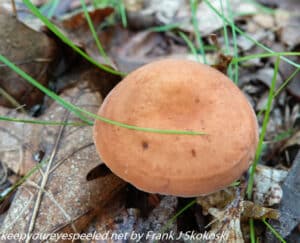 and the exotic and pretty Indian pipes or ghost plant. As stated in earlier blogs, this is not a fungus but a flowering plant that is white because it does not produce  chlorophyll. 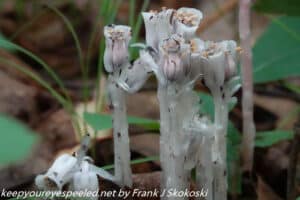 Crawling in the woods looking for mushrooms, even the the wetlands were I seldom find them, one always encounters some hazards. There were many poison ivy vines growing near where I found these mushrooms. 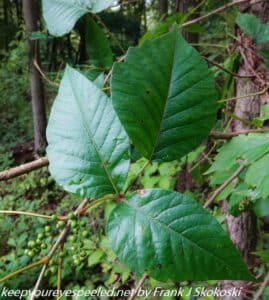 After finding these mushrooms I saw a few more birds in the wetlands, including this song sparrow, 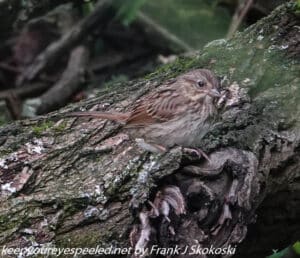 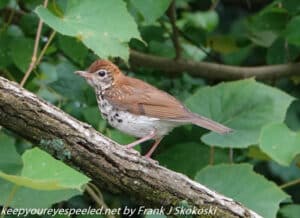 On my past few visits to the wetlands  I noticed are almost no mosquitoes or other insects in the wetlands this year. I think they may have sprayed the wetlands with an insecticide to kill them.   Sadly, it seems  there are also not a lot of bees, wasps dragonflies and other insects. I saw no cicada killing wasps. I hope I am wrong. I did see this one dragonfly on my walk in the wetlands. 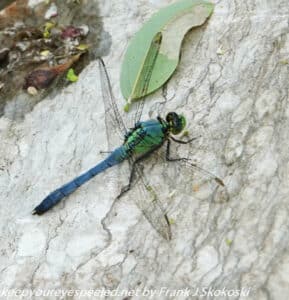 When I left the wetlands and was walking along Lake Took-A-While  the skies opened up and the rains feel. I was soaked. Thankfully, it was a warm rain. I was able to cover my camera and iPhone with plastic bags I brought along. It only rained for about 10 minutes while I continued my hike. 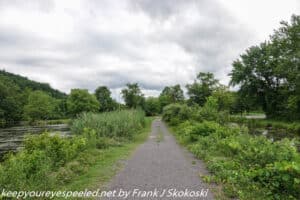 Even though the rains stopped I did not see much more wildlife activity on my hikes. There were a few bees gathering nectar from a thistle flower,

and I saw another song sparrow near the lake. 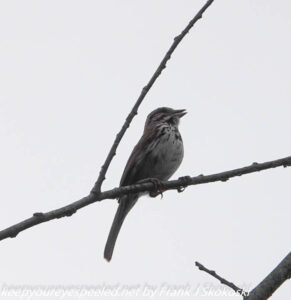 The large flock of Canada geese were on the lake and seemed to be enjoying the rains.

The signs of the Summer’s advancement could be seen along the trail. The staghorn sumac flowers were now fully developed. 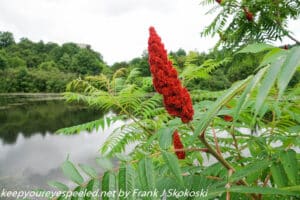 I walked to the far end of the lake and began my walk back. On the way a few more heavy showers arrived which also kept me from using my camera. 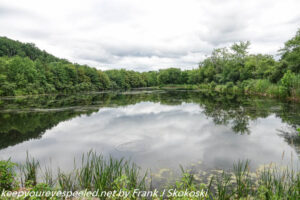 However, in the wetlands I saw a few more muskrats still feeding on the duck weeds. 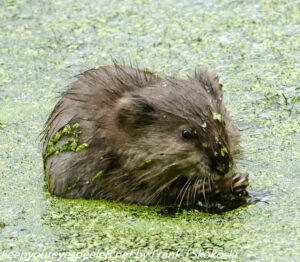 It was the nicest weather for walking, and I was disappointed not getting better photos to share, but it was still a nice way to spend a cloudy and rainy Saturday morning in the Summer. Hopefully, there will be sunshine next weekend. Here is a link to a gallery with some more photographs from my hike. Susquehanna Wetlands July 10 2o21. 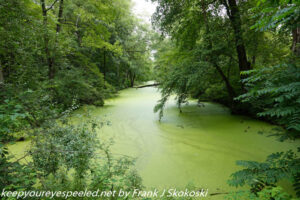 Rain is grace; rain is the sky descending to the earth; without rain, there would be no life.  John Updike