Cloudy, Wet And Cold, But It’s Still Spring At The PPL Wetlands.

May 6, 2017 / fskokoski@gmail.com / Comments Off on Cloudy, Wet And Cold, But It’s Still Spring At The PPL Wetlands.

Cloudy, Wet And Cold, But It’s Still Spring At The PPL Wetlands. 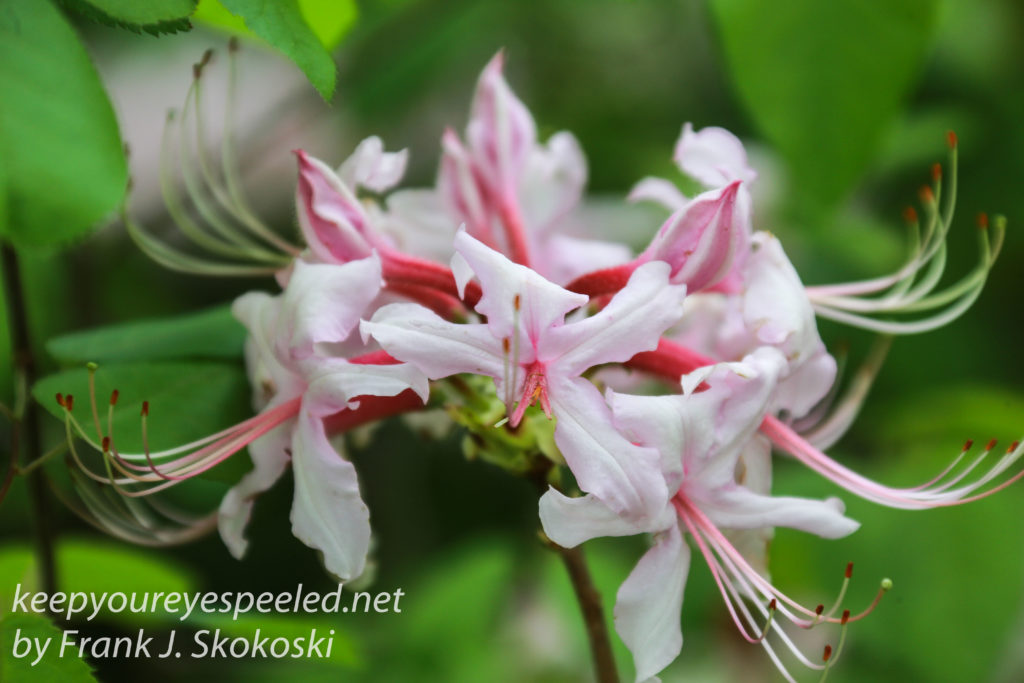 [huge_it_share][huge_it_share]The cool weather continued today here in Northeastern Pennsylvania.  It was cloudy, with a few showers and  temperatures well below normal, remaining in the low  50’s. I knew however,  that despite the cool weather, nature would not shalt  it’s annual spectacular show. So I headed down to the PPL Wetlands to see what was new. 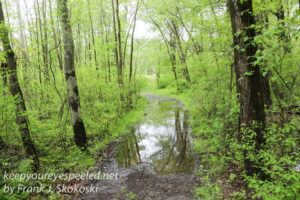 The wetlands  were muddy from the recent heavy rains, and in some areas the canals overflowed their banks and flooded the trails. 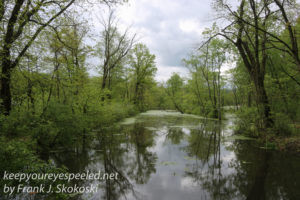 But the rain also encouraged a lot of new growth since I visited last week. The skunk cabbage are lush and thriving. 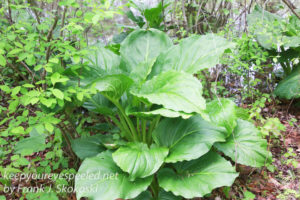 The blueberry flowers are fading already, but it looks like they will produce a big crop this year. The fruit has set so the berries should be safe even if we get a frost. 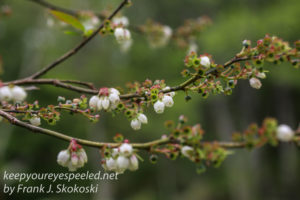 The air in the wetlands is now filled with the sweet fragrance of the honeysuckles. 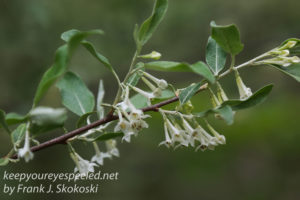 These large, and most welcome,  bushes grow throughout the wetlands. 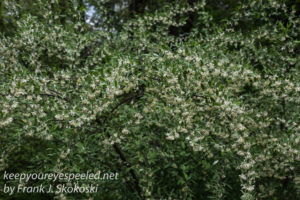 The air was also filled with the sounds of many song birds that continue to return to the area. I saw so many species but it was hard to get good photographs because of the clouds  and occasional rain.  There were many yellow warblers singing in the treetops, 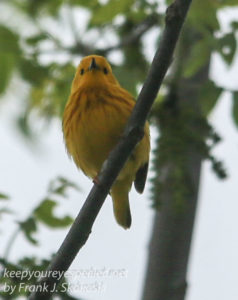 And I saw a few more American redstarts and small flocks of goldfinches. 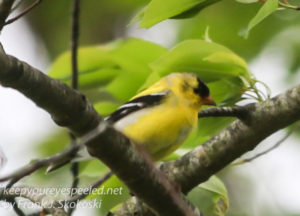 and  a few Baltimore orioles. 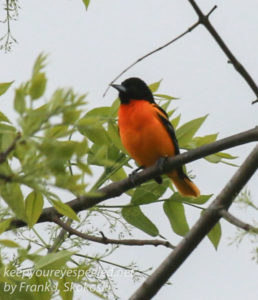 There was also the continuous chatter of the catbirds, 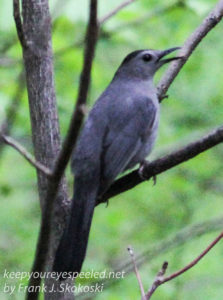 and the many red-winged blackbirds that have moved into the grassy areas adjoining the wetlands. Here is a female gathering nesting material. 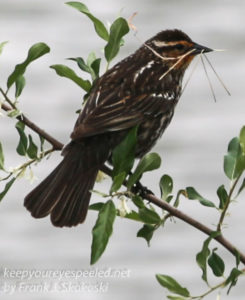 I also saw an osprey sparing high overhead, I am sure looking for some fish in the many ponds, canals and lakes below. 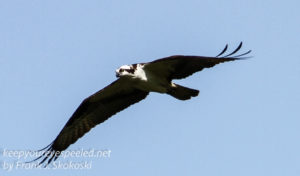 Their were also quite a few flycatchers darting about the trees and bushes on the banks of the ponds and canals. 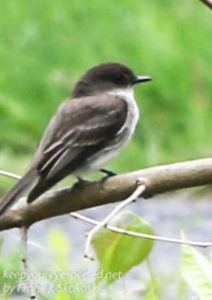 And, of course there were a number of Canada geese, now found in pairs and establishing their nesting territories. 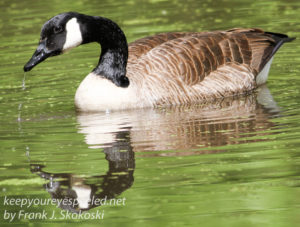 The turtles were not out in numbers like on a sunny day but there were still a few who ventured out of the now warmer waters. 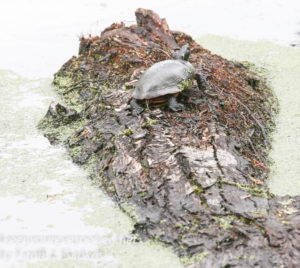 And a few frogs also were sitting along the many ponds that have formed after the heavy rains. 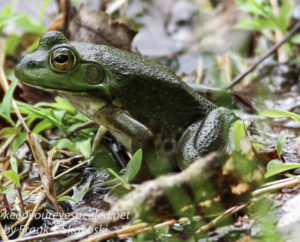 As I said there were a lot of new song birds, many of which I couldn’t identify or photographs very well such as this one which I think may be a warbler. 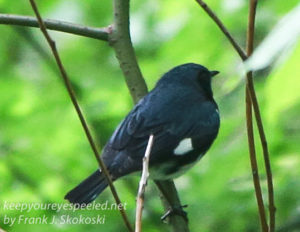 I did get a photograph of a female cardinal. It is the male that is usually seen perched high on a tree top and singing loudly to attract a female.  Here is a link to some more photographs of some of the birds I saw today. https://keepyoureyespeeled.net/photographs-2017/nggallery/photographs-2017/PPL-Wetlands-birds-May-6-2017- 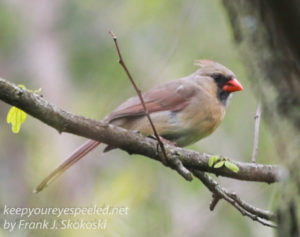 I walked to the riverlands, area of the nature preserve. again seeing many of the birds I mentioned above. Some dark clouds moved in so I headed back to the wetlands and my car. 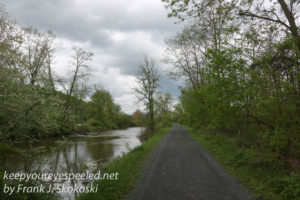 I walked along the Susquehanna River which was also very high from the recent rains.  The mandrake or may apples were now in bloom. 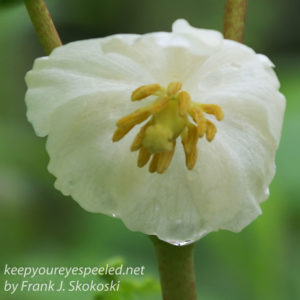 There is just so much to see outdoors this time of year. I could have spent the entire day in the wetlands looking at the  flora and fauna. but, just as I neared my car the rains began to fall so I called it a day. But I am already looking forward to my hike tomorrow. Here is a link to some more photographs from my hike today. https://keepyoureyespeeled.net/photographs-2017/nggallery/photographs-2017/PPL-Wetlands-may-6-2017- 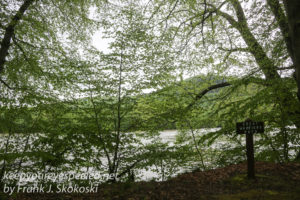 Man masters nature not by force, but by understanding. Jacob Bronowski 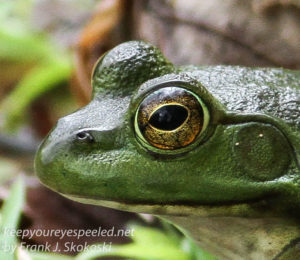