July 5, 2021 / fskokoski@gmail.com / Comments Off on Discovering More Of Nature’s Beauty At Community Park In Northeastern Pennsylvania. 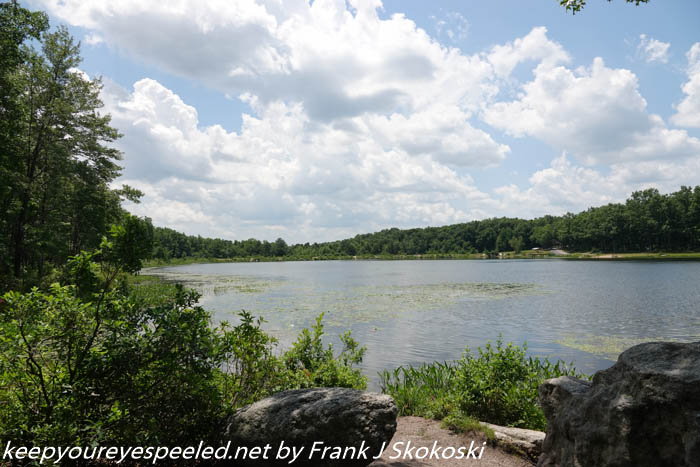 The heat wave continued here in Northeastern Pennsylvania last week. Temperatures soared into the low 90’s. It didn’t stop me from my taking daily walks.  I returned to the Community Park near my home in Hazle Township for a couple of afternoon walks in the heat and humidity. The waters of Lake Irena reflected the deep blue sky and the cumulus clouds that formed in the hot and humid air. 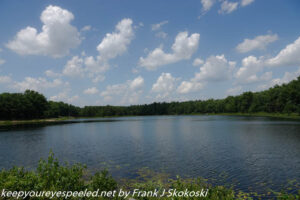 As I began my walk around the lake two things stood out. The absence of people. I saw only five  people on my three  mile walk on Tuesday, and only one person on Wednesday. There are usually dozens of folks enjoying the park but  oppressive temperatures and humidity kept them home. The second thing I noticed was the pickerelweed was now blooming in the waters along the shores of the lake. 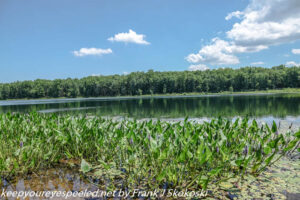 These pretty blue water flowers attract bees, butterflies and other insects and even more beauty to the lake. 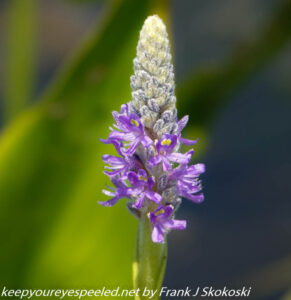 Also blooming on the lake were the delicate and beautiful waterlilies. 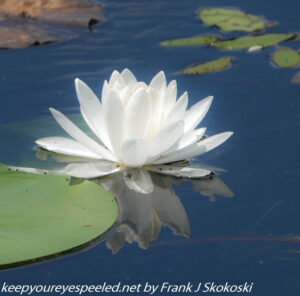 I usually take two laps around the lake before hiking on the trails in the surrounding woodlands. On my walks I saw a lot more of the many species of dragonflies that dart and hover above the pickerelweed. Once again I will state I am not an expert on identification of the ancient insects and rely on my Facebook friends for identification. Today, because of time constraints, I’m going to try to identify the ones I know Please correct me if I am wrong. This I believe is a common white tailed skimmer, 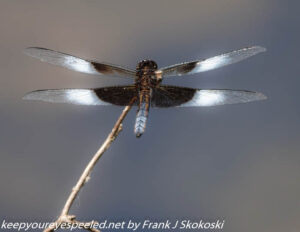 believe  is a slaty skimmer on a pickerelweed flower , and this 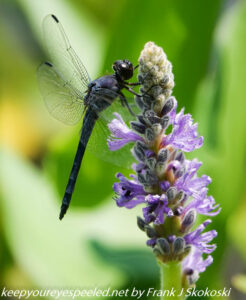 I believe is a chalk-fronted corporal. 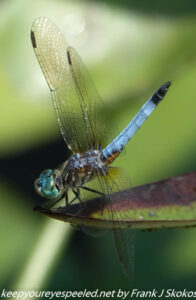 They were other species I couldn’t identify, like this one,  they will be in the photo gallery I link to my blog. 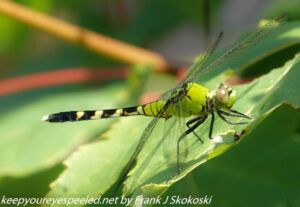 While walking around the lake I came upon this discarded exoskeleton of a dragonfly nymph or larvae. Dragonflies spend the first few years of their life in this stage and live underwater. When mature, they climb out of the water, discard their exoskeleton and become dragonflies. 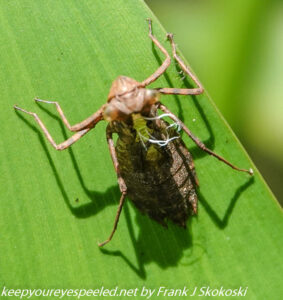 There weren’t many birds on my hikes, just some robins, crows a couple of chipping  sparrows. 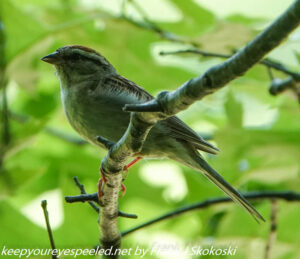 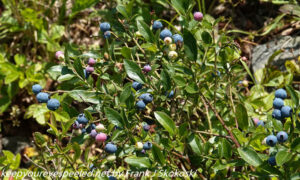 I think the woods have become too overgrown now for the berries to grow,  but there was enough for a couple of handfuls. They were delicious. 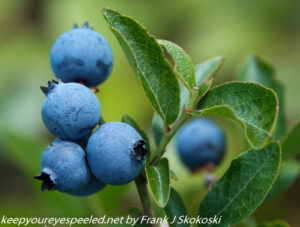 There were other wildflowers  blooming along the lake and in the surrounding woodlands, including the water hemlock flowers in bloom near the lake, 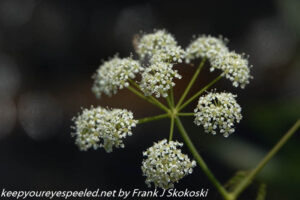 along with the pretty yellow St. John’s wort flowers. 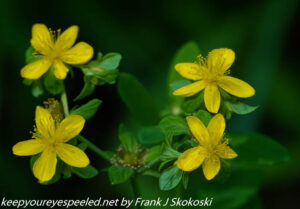 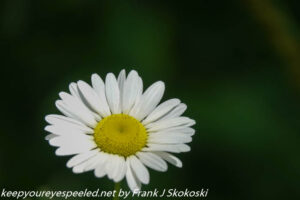 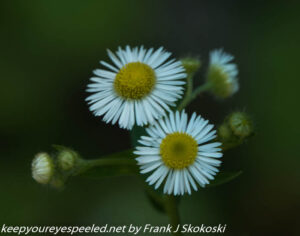 were  blooming along the trails in the surrounding woodlands. 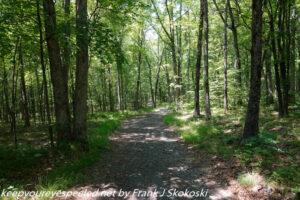 As was some of the early milkweed flowers. These flowers are always welcome  since they attract bees, wasps and butterflies. 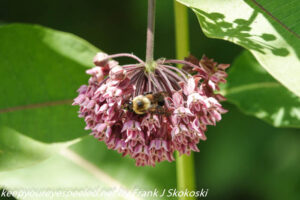 And , sure enough,  I did see this  beautiful butterfly 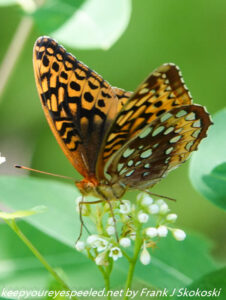 Returning to the lake I found two unusual plants. These are  They look like they may be some sort of fungus but they are actually flowers and don’t produce chlorophyll. They are  reported to have many medicinal effects. 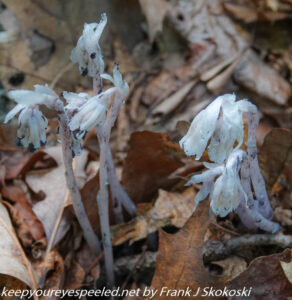 Also growing along the lake is a patch of Hartford or American climbing fern. This interesting fern is endangered in Pennsylvania 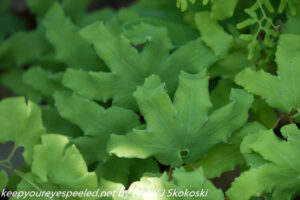 I also found  this rock lined circular depression in the lake. I have learned it is built by a male smallmouth bass as a nest for the female fish to lay her eggs. 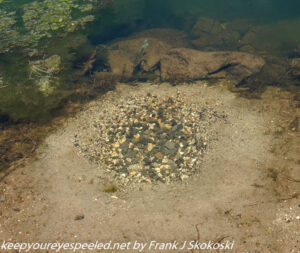 I also saw a couple of frogs on my hike. 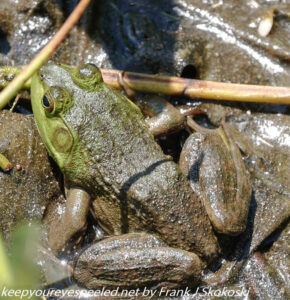 My favorite encounter on my hikes last week was with this northern water snake.

It swiftly swam trough the waters of the lake, 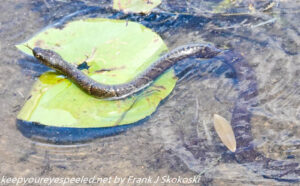 but  I able to get a few photos before it slithered under some lily pads. 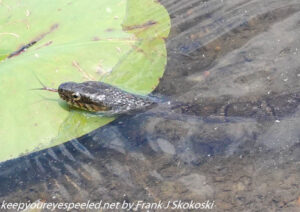 I love the Summer months here in Northeastern Pennsylvania. There are so many places to visit and so many wonders to uncover, even in the parks in our own backyard. Here is a link to a gallery with some more photographs from my hike. Community Park June 29, 30 2021. 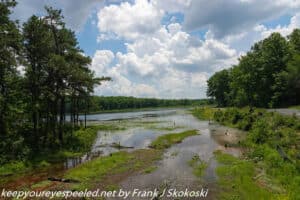 It is not so much for its beauty that the forest makes a claim upon men’s hearts, as for that subtle something, that quality of air that emanation from old trees, that so wonderfully changes and renews a weary spirit. —Robert Louis Stevenson