Florida Day Five: A Key Largo Sunrise, Sunset And Searching For An Abandoned Nike Missile Base In Between

April 15, 2020 / fskokoski@gmail.com / Comments Off on Florida Day Five: A Key Largo Sunrise, Sunset And Searching For An Abandoned Nike Missile Base In Between

Florida Day Five: A Key Largo Sunrise, Sunset And Searching For An Abandoned Nike Missile Base In Between 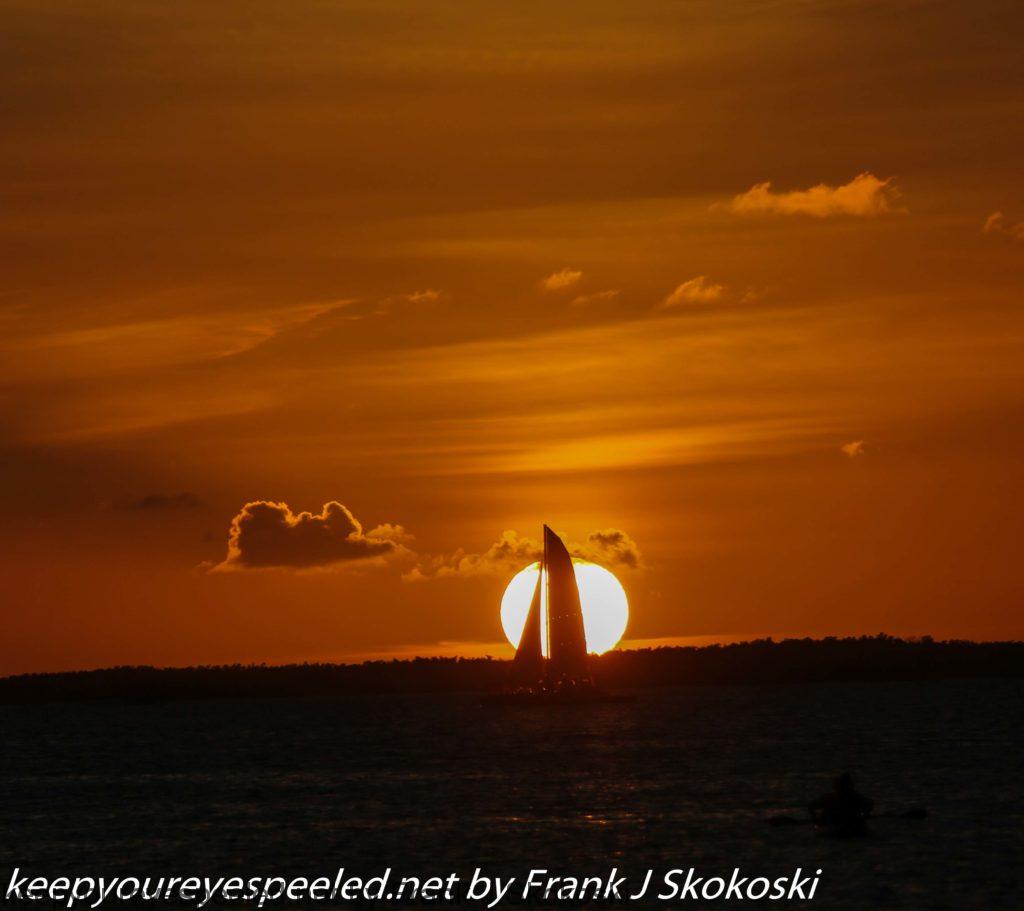 When I awoke early Saturday morning on my visit to south Florida  I was looking forward to watching the Key Largo sunrise. Thanks to some friends I had access to a pier with a view of the Atlantic Ocean and the rising sun.

After parking my Jeep, I walked past the marina where I had seen the manatees the previous afternoon and along the pier that jutted out into the Atlantic Ocean. 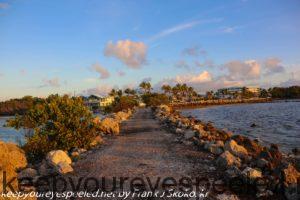 As usual in the tropics,  there were some clouds on the horizon, 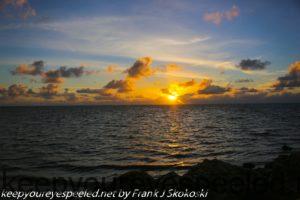 but the sun soon rose above them and bathed the ocean in its golden morning rays, . 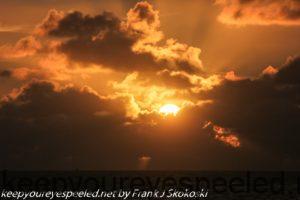 Sunrises and sunsets  have always been a favorite part of my day, and I was glad to add this beautiful  Key Largo sunrise to the  long lists of sunrises I have observed  all over our planet. Here is a link to a gallery with some more photographs of the sunrise. Florida Day Five: Sunrise Key Largo. March 14 2020.

After watching the sunrise , I  drove to the  Key Largo Hammock Botanical State Park. ,  This time I planned to hike in another, more remote section of the park, located about 5 miles north of where I had hiked the previous day. 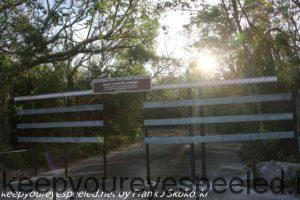 This remote section of the park is the home to snakes, crocodiles and rare butterflies. It also was the site of a former Nike missile base. Because of many endangered species and the remoteness of the site a back country permit is required to hike here. I obtained mine the previous day at the Pennekamp Coral Reef State Park in Key Largo.  As required, I placed a copy of the permit on my dashboard, took a second copy with me and called the ranger station and advise that  I entered the trail. 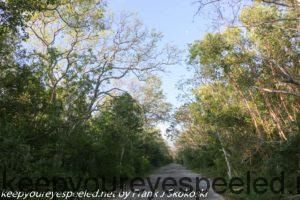 The trail into the park follows the old abandoned State Route 905.  In 1965, a few hundred yards from the entrance  a radar station for a Nike missile base , know as HM 40  ,  was built  here after the Cuban Missile crisis. The security gate to the facility can be seen from the trail. I  had read on the internet that the ruins of the old buildings  were in the park. I have now learned they are  located inside the fenced area beyond  the gate and are not accessible to the public. 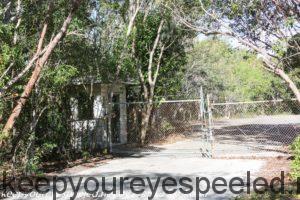 Disappointed on not seeing the ruins of the base, I continued my walk on the deteriorating asphalt of the old highway which is being slowly re-claimed by the encroaching subtropical forest.  Once again I found that area was infested with mosquitoes. This time I wore repellent which was only slightly effective. 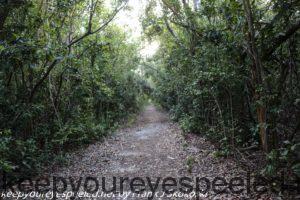 I soon came to, and decided to take,  a side trail that led east toward the ocean.

The trail become narrower as it neared the ocean. I used my PictureThis IPhone app to try and identify the exotic sub-tropical vegetation growing along the trail. These berries are from the wingleaf soapberry tree. I am not sure if this is it  but one species grows only in south Florida. 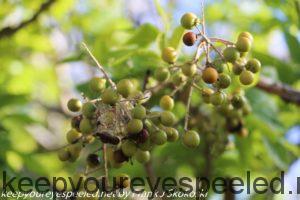 As the trail neared the  ocean  shoreline sea purslane, 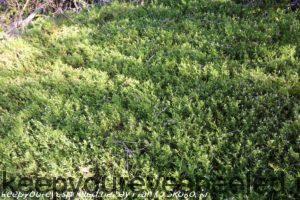 and saltwort  grew along the trail. 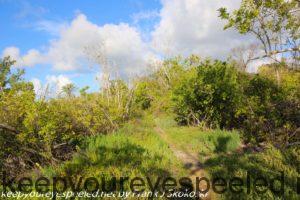 As I followed the winding trail I heard the cry of an osprey, and looking up, saw this fellow perched in a dead tree. 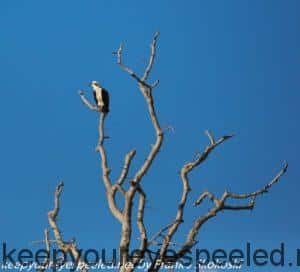 I watched the osprey for few minutes when it decided to move on to  better hunting grounds. 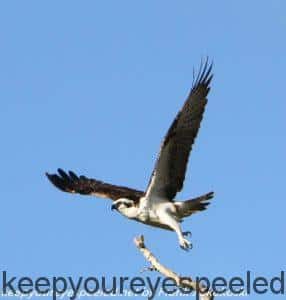 Eventually, the trail became overgrown with mangroves. I tried to make my way through the tangled branches but the ground became too muddy and I wasn’t able to see the ocean. I learned afterword I was near the  old “dynamite docks” A pier here unloaded  shiploads of dynamite for the construction industry in south Florida and Miami. The remote port was used to avoid the possibility of  large explosions in the populated port of Miami . 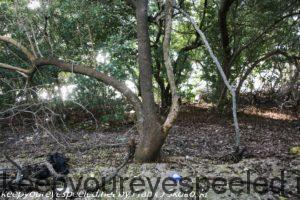 I  returned to the main trail  seeing  little wildlife only  a few cardinals and catbirds  in the trees along the trail. 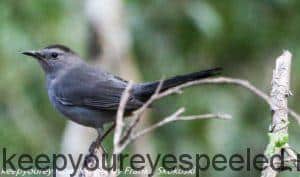 However there were quite a few butterflies fluttering in the warm morning air. 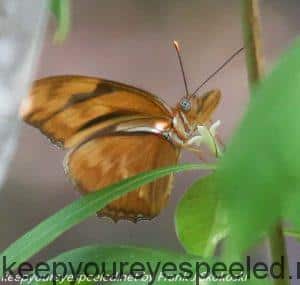 Last time I visited there was a group of butterfly enthusiasts searching for some of the rare species that live in the park. I am not a butterfly expert  so I couldn’t tell if the ones I saw were rare or not, but they sure were pretty. 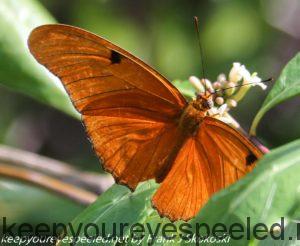 As I made my way back to the park entrance I saw this red-bellied woodpecker sitting on an abandoned electrical wire from the old Nike base. 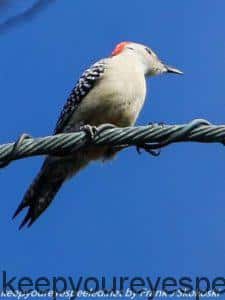 Also, the last time I visited there were hundreds of snails clinging to the branches of the trees on the trail. Not this time, however some of their shells could still be seen on the ground.

I had planned on hiking more than the five-mile distance I had walked when I arrived  back at my Jeep. However the mosquitoes and hot April Florida sun told me it was time to head out and grab some breakfast. Here is a link to a gallery on my website with more photographs from my hike. Florida Day Five: Key Largo Hammock State Park March 14 2020 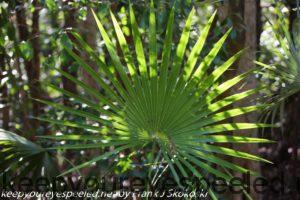 Before eating breakfast I decided to change  my lodging. I had very poor internet service at my hotel  so I  checked in  to the  nearby and  beautiful Bay Harbor & Coconut Bay Resort. 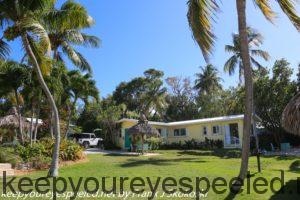 I had stayed here on my prior visit and I loved both the accommodations and the lovely gardens of this resort on the bay.  There were no rooms available when I arrived in Key Largo but a cottage was now available for two nights and I took it . After settling in to my lodging I drove a few miles to Harriette’s Restaurant, another of my Key Largo favorites. This small family owned restaurant makes one awesome breakfast, although it was closer to lunch when I arrived.  I enjoyed a hearty Spanish omelet with one of their famous homemade biscuits. 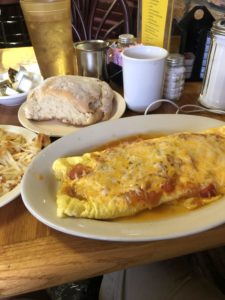 After breakfast I returned to the Bar Harbor resort and  spent some time exploring the beautiful gardens. 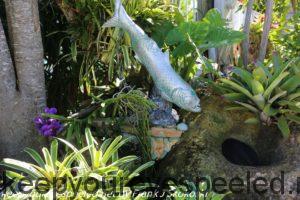 Exotic flowers can be seen growing throughout the resort. 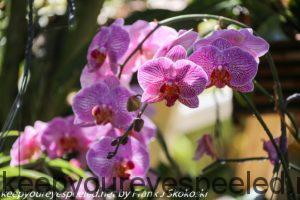 And some exotic critters too,such as this lizard. . 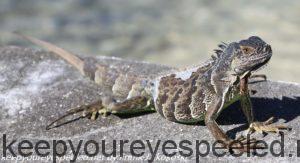 After strolling through  the gardens  I took advantage of the views of the scenic bay and relaxed in the sun for a few hours.  I would find out later it was a little to many hours. 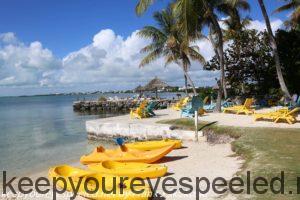 It was late afternoon and I was hungry again so  I returned to my room to shower, and discovered I got a petty good sunburn. I was surprised at the intensity of the Florida sun. I walked across the street and enjoyed a nice dinner at another great local restaurant, Sal Ballyhoo’s. The fresh grouper was delicious as was the key lime pie I had for dessert. 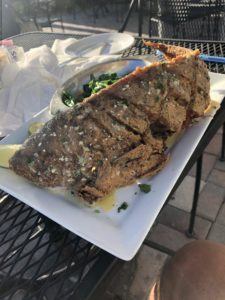 Afterward I watched the sunset from my resort. 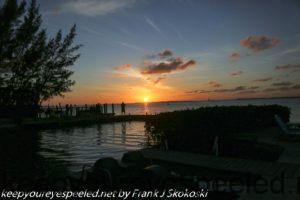 It was a perfect Florida sunset.  Although I was tired from a long day in Key Largo I visited some friends and enjoyed the warm Florida evening playing cards, chatting and enjoying a couple of beers. Another wonderful day in paradise it was. This is a link to a gallery on my website with more photographs from my afternoon and evening. Florida Day Five: Key Largo sunset March 14 2020 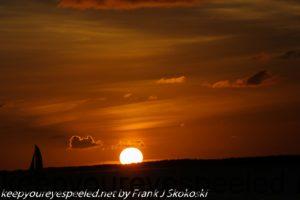 “There’s a sunrise and a sunset every single day, and they’re absolutely free. Don’t miss so many of them.”
― Jo Walton