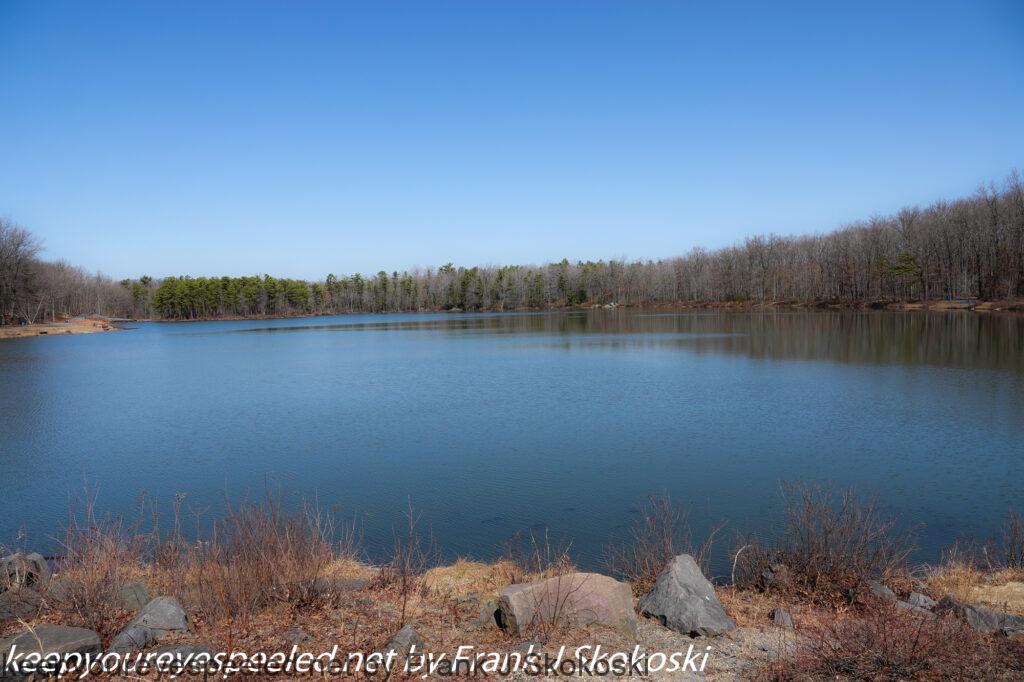 It’s hard to believe it’s been four months since I last visited my local Community  Park in Hazle Township.  My last  visit here  was on Thanksgiving Day last November.  I would often take my afternoon walks here in the warmer months. The snow, ice , mud and cold had me walking on the plowed streets in my neighborhood during the Winter. 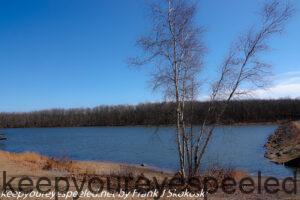 But, it’s Spring now and the warm weather we had the last few weeks finally melted the snow.  So,   last Friday, the last day of Winter, I decided to drive to Community Park which is  located a few miles from my home.  I arrived under clear blue skies and  bright March sunshine. However, a cold front had just passed through, and it was cold and windy with  temperatures in the low 30’s. I walked down  to Lake Irena and found it ice free. There was no  snow or ice on the trails either. 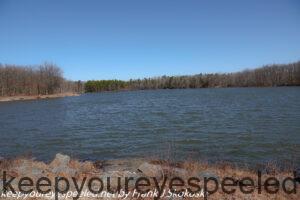 I began my usual walk around the lake but, as I approached the stream that feeds the lake on the north side the trail was closed. It  appears they are replacing the bridge that spans the stream. 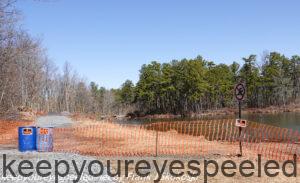 I turned back and walked to the other side of the lake, hoping to see some wildlife, especially some water fowl or the bald eagles and ospreys that  often visit the lake in Spring. 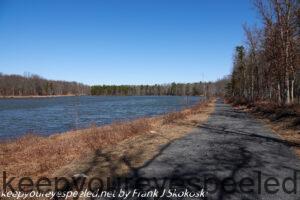 I walked  on the east side of the lake out to the stream where the bridge is being replaced or repaired. On this cold and windy afternoon I saw only two other folks on my three mile hike. 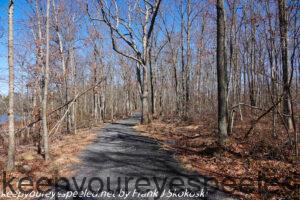 And not much wildlife either. There were seven Canada ducks swimming on the lake. This pair started honking loudly as I approached.

There was also  a pair of mallard ducks also swam on the choppy waters of the lake. 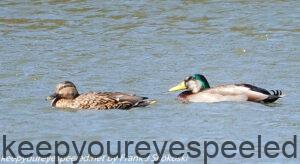 I left the lake and walked along the trails in the surrounding woods. There was no snow but a lot of water and mud on the paths. 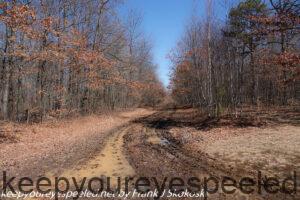 There was almost no signs of any new growth on my hike. The only green I saw were the leaves of the mountain laurel, 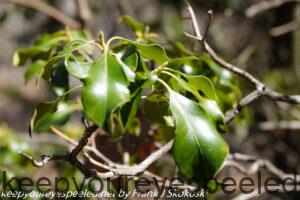 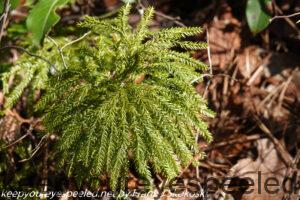 the green needles of the pitch pine and white pine growing along the lake and in the woods, and 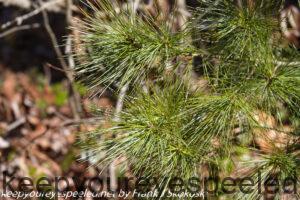 the numerous teaberry leaves growing along the trail. It would be long until the trees, flowers and shrubs begin to appear again. 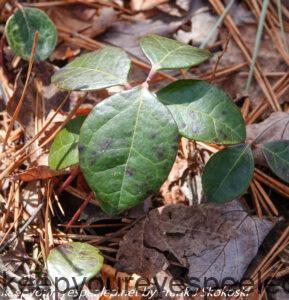 One sure sign of this were the many robins I saw on my walk. Spring would arrive right on time the next day. 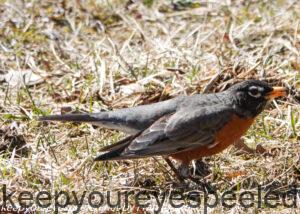 I ended my three mile hike on Friday and returned to the Community park on Monday. It was warmer, with sunshine and  temperatures in the upper 50’s.  The warm weather attracted dozens of fishermen, families and many other visitors  to the park and lake. 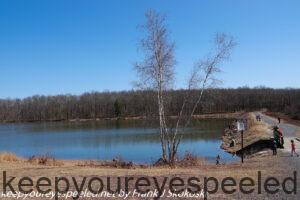 I took the same three mile hike as I did Friday.  The seven Canada geese were still on the waters of the lake. However, I only saw this one male mallard. I  would guess the female may have already laid eggs and was tending her nest. 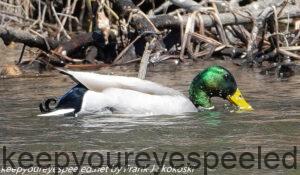 Leaving the lake I walked into the woodlands. This time I heard  a loud chorus of frogs. 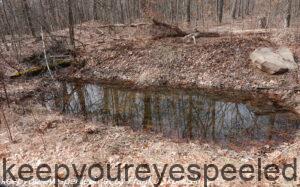 It was coming from a very small vernal pond along the trail. I often have  seen  huge masses of frog eggs here in past years and wondered what kind of frogs laid them. 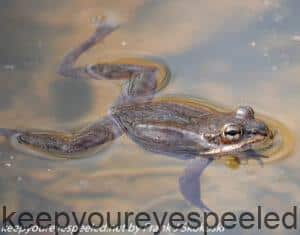 Well this year I found out. As I approached the pond I heard the splashing of water as the croaking frogs jumped underwater to safety. I stood quietly near the pond for a while and watched as almost two dozen frogs slowly swam to the surface of this small pond. 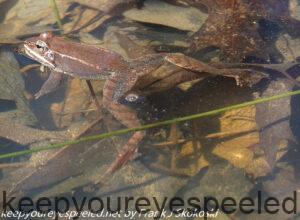 I have since learned they are wood frogs. 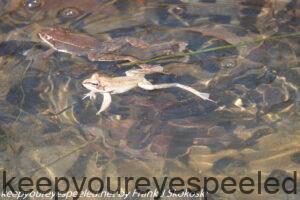 They would float motionlessly on the waters, occasionally engaging in egg producing activities. Reading about these frogs I have learned that during the winter they hide under the leaf litter, and can survive being frozen solid! Amazing the wonders of nature, so much of which I am unaware. 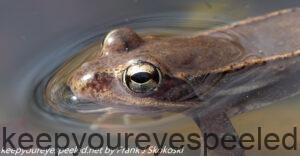 I finished my three mile hike without seeing any other wildlife, but once again it was a nice and educational walk.  It was even warmer on Tuesday, temperatures were now in the 60’s when I returned again to Community Park for another hike.  Except for a few high clouds the skies were mostly clear. 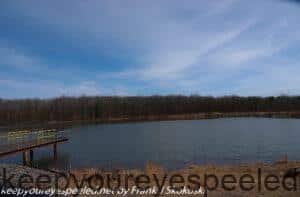 I followed the same path I did on my two prior hikes. I again saw  seven Canada geese, the mallard duck, the wood frogs and robins. There was only one new addition to my list of wildlife, this turtle, which I think is a painted turtle but I am not sure of the identification. But it took advantage of the warm March sun  soaking up it’s  rays on a log. 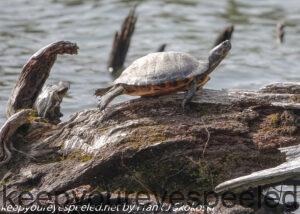 It rained on Wednesday but I returned to Community Park on  Thursday, another warm and partly sunny day. Temperatures were in the 60’s and the park was crowded with folks enjoying the Spring weather. 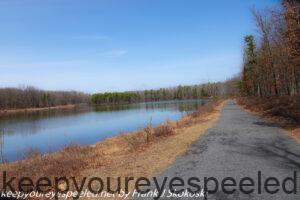 I  kept to my routine and followed the same route I did on my three previous hikes. I didn’t see the mallard ducks on this hike but the geese where there. And my turtle friend now had three companions on his log. 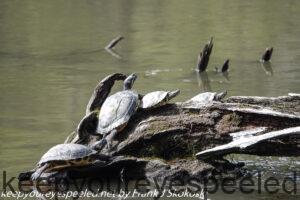 Leaving the lake I hikes in the surrounding woodlands which were now even wetter from the rain. 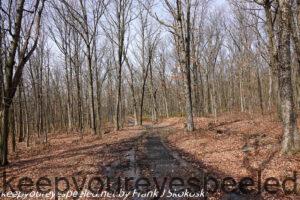 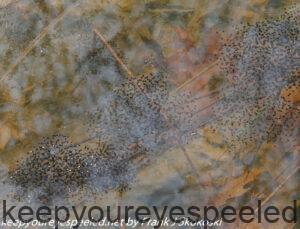 I continued my hike and found my first wildflowers of the Spring. Two pretty yellow coltsfoot flowers. It was good to finally see some color appear in the woods. Much more is on the way. 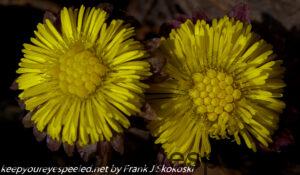 Walking back from my three mile hike I heard another wonderful sound, the chorus of the spring peeper frogs. I love this sound which is a sure sign Spring is here. Here is a YouTube video I uploaded. https://youtu.be/1x64JO5OYfYI enjoyed my hikes in the Community Park and look forward to continuing them, and sharing the  beauty of nature i discover there. Here is a link to a gallery with some more photo from my hikes in Community Park.  Community Park hikes March 19 to March 25 2021. 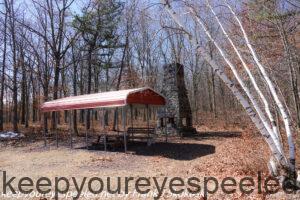 Yesterday the twig was brown and bare;
To-day the glint of green is there
To-morrow will be leaflets spare;
I know no thing so wondrous fair
No miracle so strangely rare.
I wonder what will next be there!
~L. H. Bailey