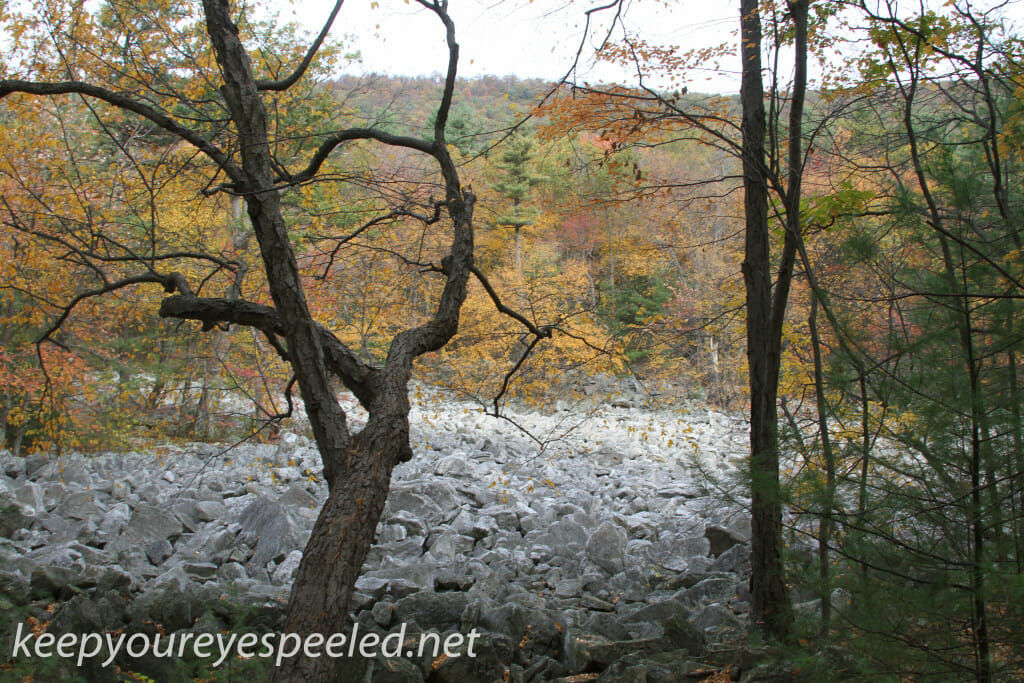 Now that the mushroom season is over here in my area of Northeastern Pennsylvania, I will have more time to explore some of the many beautiful natural areas we have in our State. I decided to head to the Hawk Mountain Sanctuary in  northern Berk’s County,  about 40 miles  south and east  of my  home in Hazle Township. 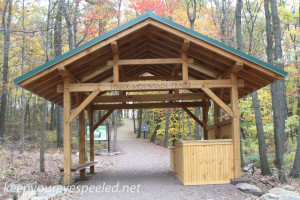 Hawk Mountain Sanctuary is situated  in the Blue Mountain section of the Appalachian Mountains near the  famous Appalachian trail. It is located along a major migration route for many species of raptors and draws large crowds during the Spring and Summer migrations.

It was a cold and mainly overcast day today and the wind was out of the south, not a good day to see migrating birds. After taking in one of the many spectacular vistas at the  South lookout.  I  decided to hike the River of Rocks trail. 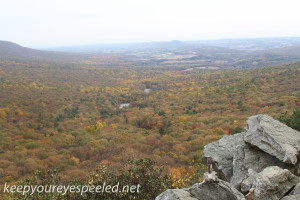 I have been to Hawk Mountain a few times but never hiked this trail before. It is famous for it’s two large boulder fields, formed during the glacial periods, the last of which was about 12,000 years ago here in Pennsylvania. They can be seen in the photograph above from the South Lookout  and here is a photograph taken with my zoom lens. 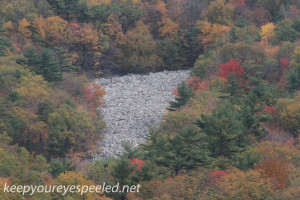 I hiked down the steep and rocky trail and it was  somewhat difficult for someone, like me, not accustomed to walking over the many rock covered stretches of the trail. 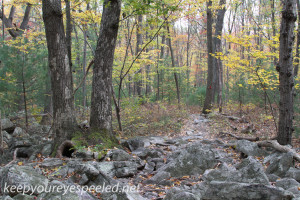 The trail wound downward under many deciduous trees still at  the peak of their fall color. The woods were quiet and was surprised not to have encountered many birds, squirrels or chipmunks. There were a few  of these birds which I haven’t been able to identify but think it is some type of thrush.

I walked past two large boulder fields on the way down. They were similar to boulder field in Hickory Run State Park and were created by the same conditions. 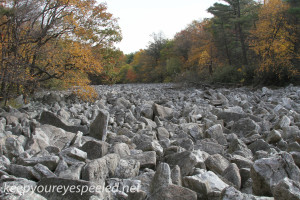 The trail looped around the second boulder field and then headed back up the mountain. At first it was a much easier hike, without a lot of rocks and a somewhat gentle slope.  There were more ferns and larger trees here but once again the trail became more steep and rocky. 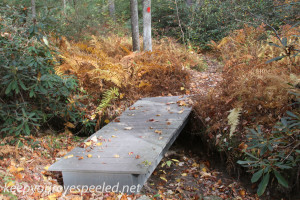 The final leg, near Overlooks, became quite steep and made for a strenuous hike until I reached the 3/4 Lookout overlook. The views at all of the overlooks are spectacular. They would have been even more beautiful on a sunny day but I enjoyed them under the overcast skies. 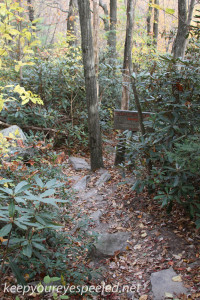 I only passed one fellow on the four mile River of Rocks hike but was now joined by a large number of hikers making their way, with me, to the North Lookout. Once again it was a somewhat rocky climb to the lookout but the view was worth it. 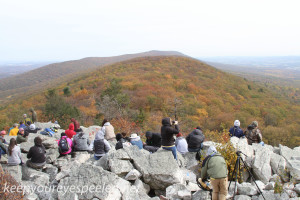 I could seethe mountains of my hometown in the distance and could easily make out the gap in the Spring mountain  created by Interstate 81. I sat and rested for awhile, taking in the view. Unfortunately, because of the wind direction there were almost no hawks flying overhead.  I hiked back to the sanctuary, stopping  at a few more overlooks on the way. Here is a link to some more photographs of the views from atop the lookouts. https://keepyoureyespeeled.net/photographs-5/nggallery/blog-photos/hawk-mountain-overlooks-october-24-2015\ 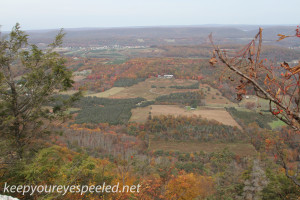 Although I wasn’t able to get any photographs of the migrating hawks, or even an eagle,  it sure was a great place to spend a late october day. It certainly is one of the many treasures we have in the Commonwealth of Pennsylvania.  Here is a link to some more photographs of my hike on the River of Rocks trail. https://keepyoureyespeeled.net/photographs-5/nggallery/blog-photos/hawk-mountain-river-of-rocks-hike-october-24-2015

Climb the mountains and get their good tidings. Nature’s peace will flow into you as sunshine flows into trees. The winds will blow their own freshness into you, and the storms their energy, while cares will drop off like autumn leaves. As age comes on, one source of enjoyment after another is closed, but Nature’s sources never fail. ~John Muir 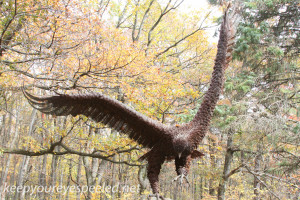