Ice-Free Waters In January At The PPL Wetlands.

January 8, 2019 / fskokoski@gmail.com / Comments Off on Ice-Free Waters In January At The PPL Wetlands.

Ice-Free Waters In January At The PPL Wetlands. 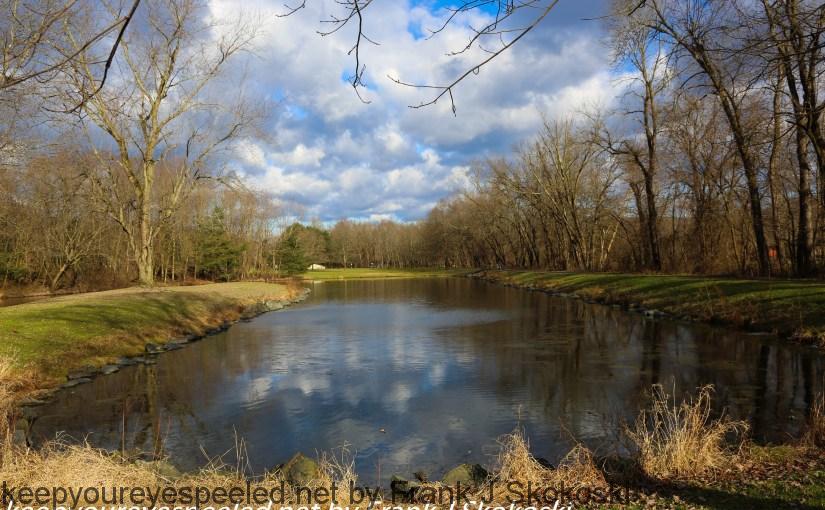 January is historically the coldest month of the year here  in Northeastern Pennsylvania. Most years one will find the lakes, ponds and creeks frozen solid in January. Some years even the rivers will freeze over. Not this year. I visited the PPL Wetlands  on Sunday and found Lake Took-A-While completely ice free.

The sun was breaking through the clouds when I arrived. It was windy with temperatures in the mid 30’s. We have had a few mild months of January the past few years, and we usually pay for it in March and April.

I walked along the lake hoping to see some water birds on the ice free  waters. I have seen some unusual   sightings on my last few walks but this week I only saw a flock of common mergansers, which quickly flew off as  I approached.

I also saw a kingfisher perched in a tree across the lake  which was  still able to dive for fish on the open waters.

And there was still a large flock of Canada geese. I counted over 70 last week. There were 52 in the flock on Sunday.

I walked along the lake where I encountered a few folks walking their dogs. I headed to the wetlands area of the nature preserve passing a few fishermen on the lake.

The unseasonably warm January weather has allowed a few plants to survive the short winter days.

I walked along the canals and was disappointed when I didn’t see any water birds. In fact, I saw only a  few of the usual winter residents. I saw  no nuthatches, black-capped chickadees, juncos, woodpeckers, titmice or cardinals on my hike. Very unusual. I did see a few crows attacking a hawk.  And this sparrow.

I also spotted this hawk perched in a tree in the distance. He flew off as I approached.

I walked to the small lake located on the western edge of the wetlands. Once again I saw no birds or other wildlife.  Not even a chipmunk or squirrel.

Clouds moved in as I walked back along the ice-free waters of the canals in the wetland.

Although I didn’t see as much wildlife as I had hoped, it was still  a pleasant walk on  another mild January day in Northeastern Pennsylvania. Here is a link to some more photographs from my hike. PPL Wetlands January 6 2019.

“To those devoid of imagination a blank place on the map is a useless waste; to others, the most valuable part.”
― Aldo Leopold