January 28, 2021 / fskokoski@gmail.com / Comments Off on Inauguration Day In Washington DC: A Morning Walk Amid Heavy Security 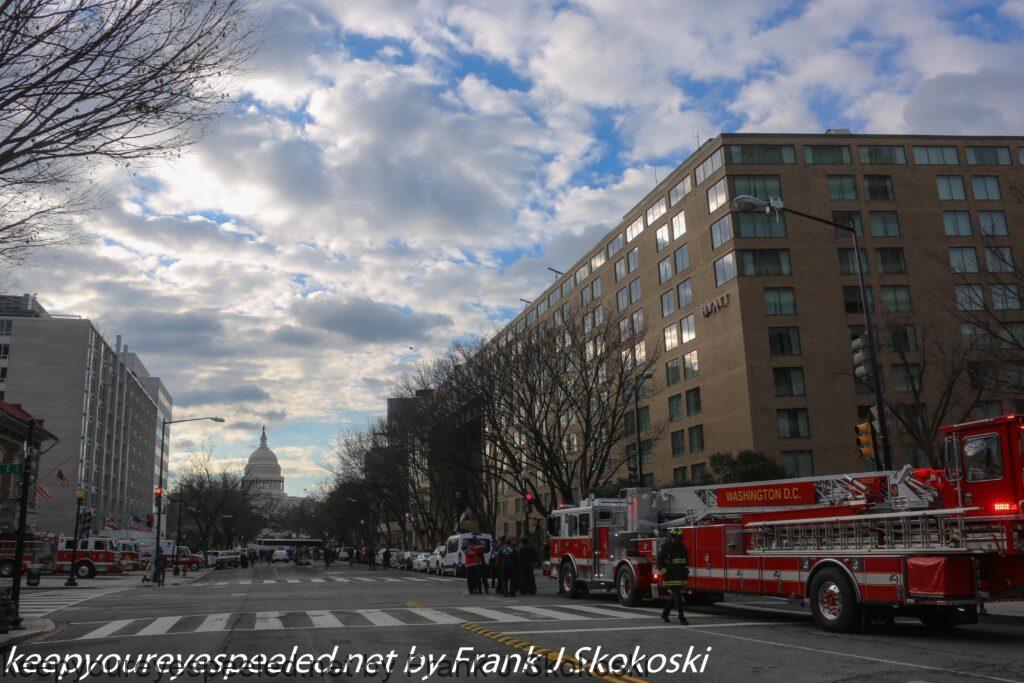 I awoke early Wednesday morning, the third time I was in Washington DC  on  Inauguration Day. I was in law school in Washington when  President Regan was inaugurated for his first term in 1980. And I was in the city for President Trump’s inauguration four years ago. Being near, and observing, this peaceful transition of political power is an amazing experience. 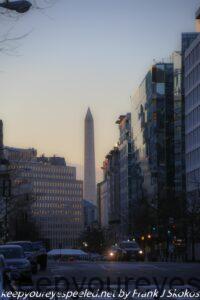 Well this year, there were some hiccups in the process, which resulted in an assault on the seat of our Democracy, and, although the streets were peaceful on my 7 mile walk on Tuesday, I still didn’t know what to expect on this historic day. 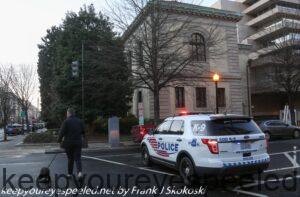 A cold front brought colder temperatures overnight. It was clear with a steady northwesterly wind and 40 degrees when I left my hotel and walked down Rhode Island Avenue in the morning twilight.

As I approached  Scott Circle I noticed a small gathering of photographers looking south on 16th Street. 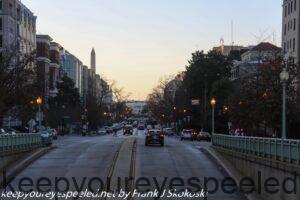 I soon learned that President Trump, who would be the first President in over 150 years not to attend his successor’s inauguration, would be leaving Washington DC by helicopter at 8 a.m.  And that this location would possibly be a good place to photograph this historic event, because of the tight security near the White House. 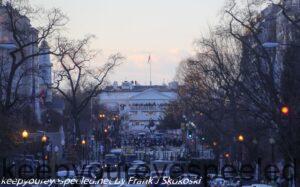 Of course I decided to stay here and hoped to see the Presidential helicopter take off. I walked around the neighborhood and soon learned  some more history was occurring   a few blocks away. 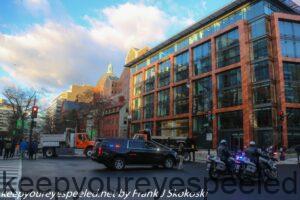 President Elect Biden was attending Mass at St. Matthew’s Cathedral. He had invited members of the Republican Party to accompany him and some accepted. Once again I encountered heavy security and could only get to within one block of this historic church, where the funeral of President Kennedy was held and where Pope John Paul II  visited and held Mass in 1979. 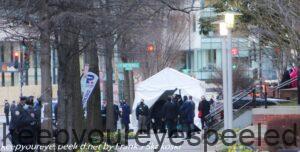 Returning to Scott Circle, I waited a short while and was able to watch the Presidential helicopter fly off with the 45th President of the United States. 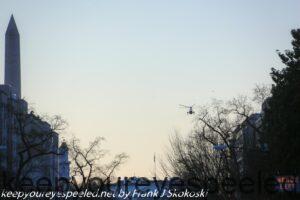 It was a short flight to Joint Base Andrews, where President Trump would board Air Force One for the last time and fly to his home in Florida. 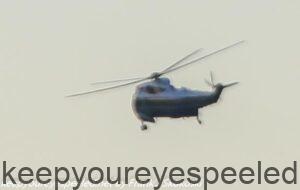 After watching the helicopter fly out of sight I began my walk to the  Capitol about 2 miles away. I now knew the closest I would probably get would be 1st and D street, if I could even get that close with the Inauguration scheduled for around noon. 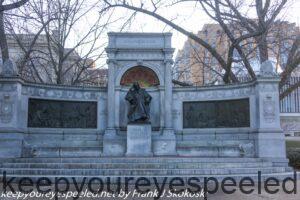 I took a more direct route, walking down Massachusetts  Avenue, hoping to stay away from the security checkpoints as much as possible.  It was cold but a nice walk under sunny January skies. Along the way I took in the sights, like this statue in front of a building built by workmen from Idaho. 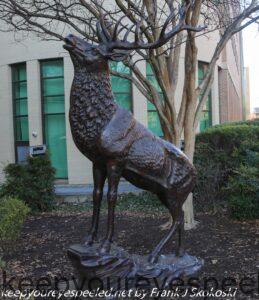 and enjoyed  the well kept properties, many with gardens with flowers in bloom, including many ornamental cabbages. 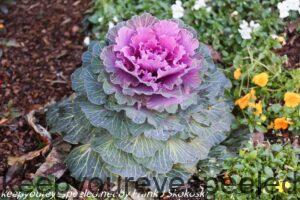 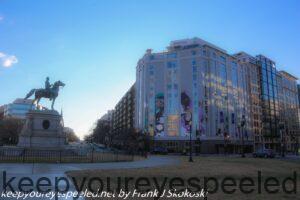 ass through a checkpoint to access this usually busy highway. My walk took me to Thomas Circle, 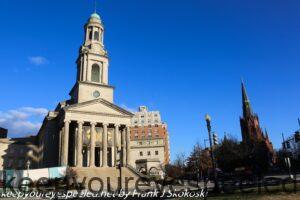 At 13th and L Street I encountered my first checkpoint, manned by Pennsylvania National Guardsmen. 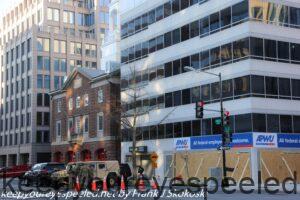 I made it a point to thank every Guardsman, Secret Serviceman, Police Officer, First Responder or any other individual I saw on my 8 1/2 mile hike who provided security for the Inauguration and the peaceful transfer of power. 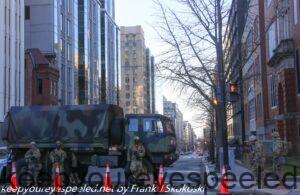 They were appreciative and I had many a chat with Guardsmen from all over our Nation. 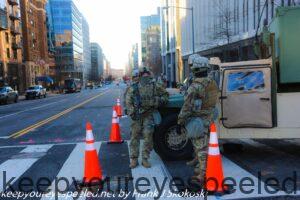 As I walked down closer to the Mall I encountered more checkpoints. 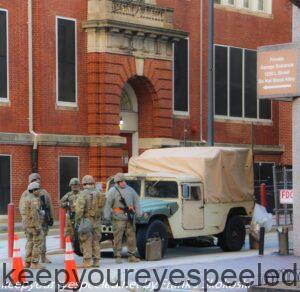 The streets were now mainly deserted. No tourists, protesters and, not even many members of the press and media. I believe most had already entered the secured areas through the checkpoints to set up for the Inauguration ceremonies. I was able to walk right down the middle of H Street in Chinatown, 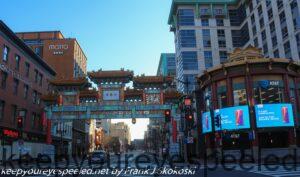 Checkpoints became more frequent and security tighter as I walked past Judiciary Square and neared the capitol. 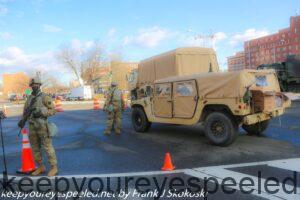 There were also more reporters now,  many using the National Guardsmen as background for their news reports. 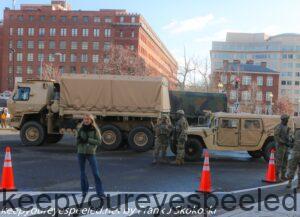 There were now a few tourists. A group of about 8 students from Texas were here in support of the new President. They explained their reasons for a Belgian news reporter as I watched. When their interview was over ,the reporter asked my my opinion of the election and political situation in the United States, which I gladly expressed. 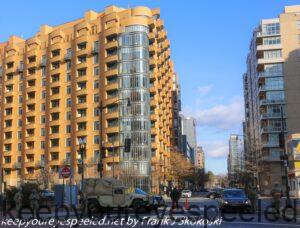 I was now near 1 st Street and encountered even more security. As I turned the corner I again I saw the majestic Dome of our Nation’s Capitol building shining in the morning sunlight. As I stated in my previous blog post, it give me goosebumps every time I see it. I am very proud of our Nation, our Constitution , our Democracy and it’s basic principal that “all men are created equal”. 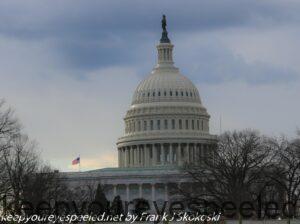 There were many reporters gathered here but more about that in my next blog post. Here is a link to a gallery with some more photographs from my morning walk to the Capitol on Inauguration Day.  Washington DC Inauguration  January 20 2021. 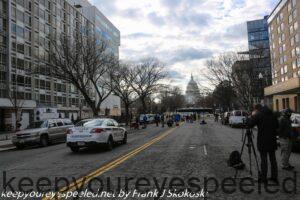