It Didn't Take Long To Return To The Weiser State Forest.

It Didn't Take Long To Return To The Weiser State Forest. 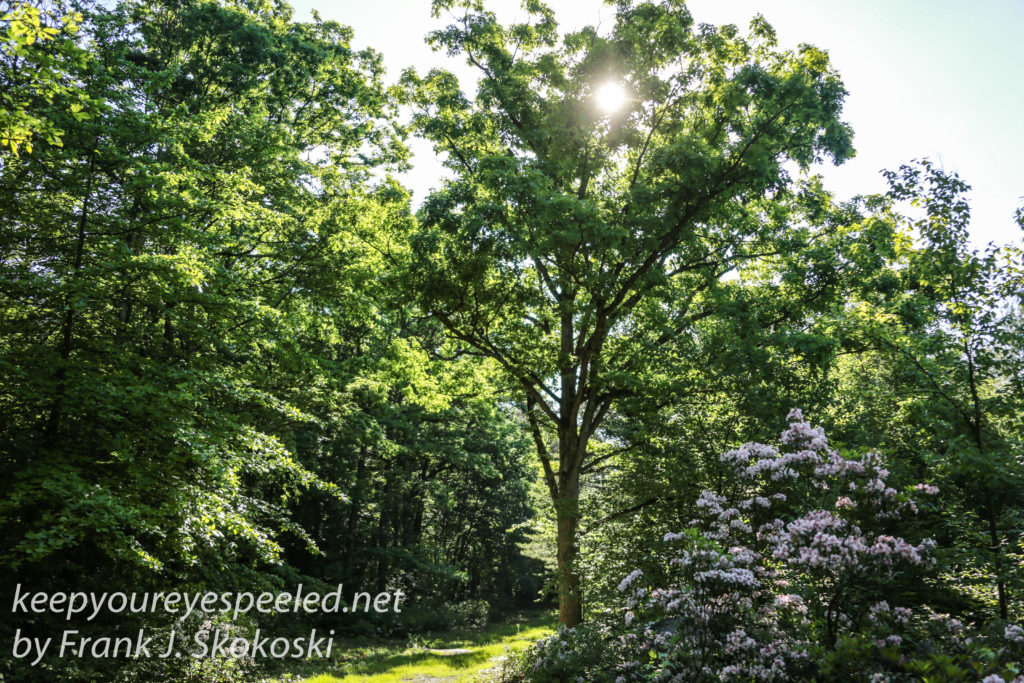 It was a sunny and very windy June morning when I arrived at the  visitor center and forest office. . The center was closed since it was Sunday and I didn’t have a map of the trails  so I   decided to hike on the first trail I found,  the Pond Trail which was on the east side of the visitor center’s grounds. 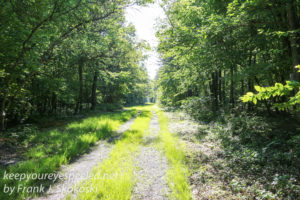 The trail began along an old strip mine to the north. It was lined with pine trees that must have been planted when portions of the mine were reclaimed. I was a good day to be exploring the woods of Northeastern Pennsylvania since the state flower, the mountain laurel was in bloom.

This is always one of my favorite times of year, and especially on a day when the the  intense June sun was shining. The flowers vary in color to pure white to  almost pink, with many shades in between. They provide a beautiful contrast to the  bright green shades of the still young leaves of the trees, bushes and plants on the trail. 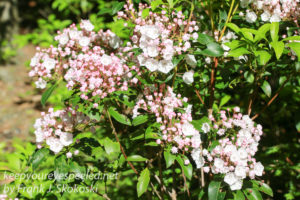 I walked out about a 1/2 mile and came upon another trail heading to the south, the Headwater trail.  I decided to see where this would lead and it quickly led me into an older second growth forest  along the banks of an old creek. 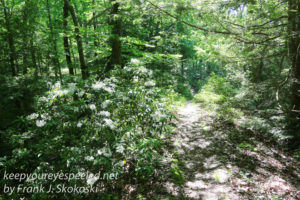 The creek most have been diverted by the coal mining activity in the area.  since there were no waters flowing after some rain we had last week. And, judging by the size of the boulders in the creek bed, I am sure it at one time contained fast moving waters. 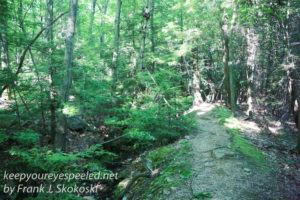 Along the trail I found the new blossoms of fly poison, a native plant very common in the mountains of northeastern pennsylvania.  The bulb of this plant  was mixed with sugar by American colonists to kill flies 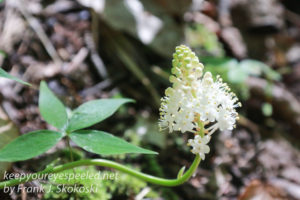 The trail, again lined with mountain laurel, also had a lot of birds singing in the thick leaf cover overhead. I once again had a hard time finding and identifying them, let alone being able to photograph them.  I was able to get a photograph of this  one.  I now knew immediately that is was an oven bird, having learned this a few weeks ago from my new birding friends. 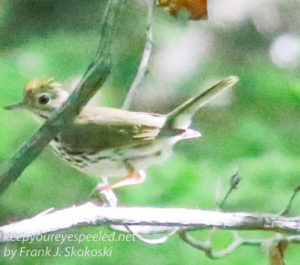 I also saw a lot of the sheep laurel which is much smaller than than it’s relative the mountain laurel but still pretty in it’s own way. 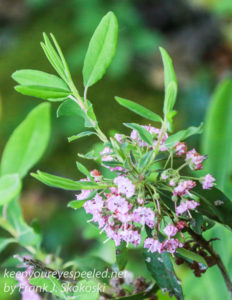 I followed the trail back to the visitor center and found another trail that led up the side of a mountain. It was designed as a project for an Eagle scout. The trail again wound its way up the hill through heavily forested woods lined with mountain laurel. 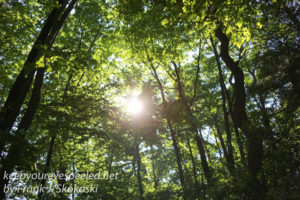 It ended at a highway and I thought it had to continue on, since it would be strange to end in the middle of a road. I didn’t have a trail  a map but, after some investigation found a red  trail marker on the other side of the highway, and continued to follow the trail. 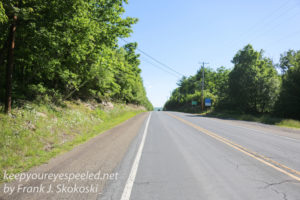 It proceeded into a very old strip mined area. You could tell it was old by the size of the trees that has grown in along the old strip mined banks. It was the type of area I was familiar with since a large portion of the woods in the area I  grew up in were strip mines that had grown in with birch, aspen and pine trees. 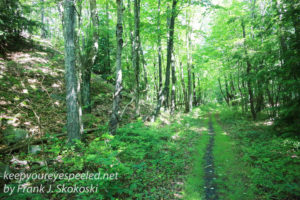 The trail merged with the more open black road trail which appears to have been an old haul road used during the strip mining of coal. 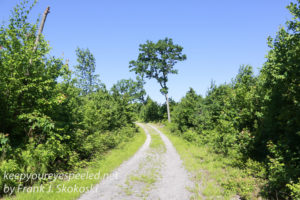 It was more open allowing various shrubs and plants to grow in the sunshine. And where there are flowers there are butterflies and other insects. 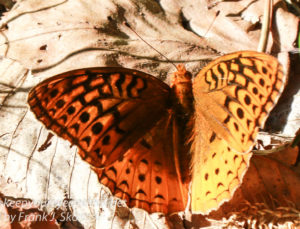 I also saw some dragonflies in the area which led me to believe  there had to be some ponds or other sitting water in the area, although I didn’t see them. 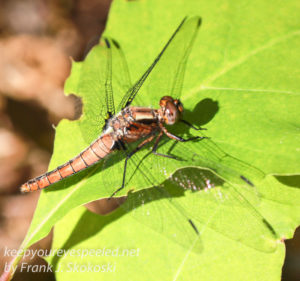 The trail led uphill and intersected with another trail, the Big Mountain Trail, which I learned runs along the entire length of the Roaring Creek Tract of the Weiser State Forest atop the southerly mountain through which the southern branch of Roaring Creek flows. 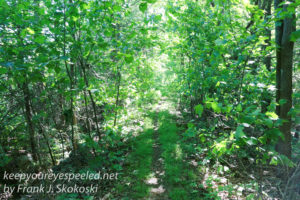 The trail was atop the mountain and so I got the full force of the strong northerly wind that was blowing that morning. I enjoyed the wind blowing the light green leaves across the deep blue sky as I walked along a narrow path along  an old aqueduct. 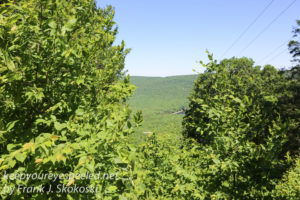 The trail became rocky but I enjoyed it since I had hiked many a rocky trail on the hills near my home when I was young. I loved hopping along the rocks and boulders. 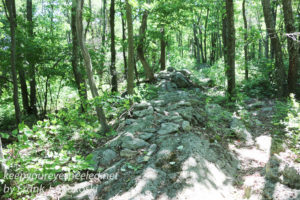 I could have walked until sundown had I had the time.  But I didn’t and I sadly had to turn back. I retraced my steps down to the Black Road Trail.  Along the trail I found a few stands of young American Chestnut trees. The american chestnut tree once dominated the woods of northeastern Pennsylvania. Many were cut down for timber for the coal mines and then, the remaining trees were devastated by a blight at the beginning of the last century.  They will grow to about this size and then succumb to the blight. 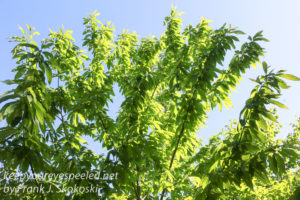 I followed the trail down the mountain and back to the visitor center. It was a beautiful morning to explore this vast tract of woodland  and I am sure there are even more heavily forested areas  in this tract of state forest. I look forward to returning and exploring them. Here is a link to some more photographs from my hike. https://www.keepyoureyespeeled.net/photographs-page-2/nggallery/photographs-page-two-blog/weiser-state-forest-june-13-2016 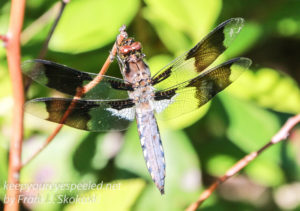 “I love the tactile experience of walking in the woods. It’s muted browns, grays, and greens comfort me. The moss and leaves five softly under my boots. Large, scattered rocks feel permanent and unshakable. The pull of the mountain is like gravity for my soul.”
― Heather Day Gilbert, 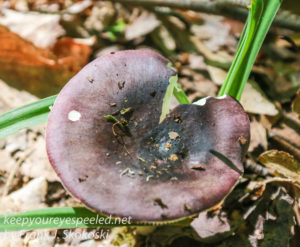