December 15, 2022 / fskokoski@gmail.com / Comments Off on It’s Looking A Lot Like Christmas On The Greater Hazleton Rails To Trails 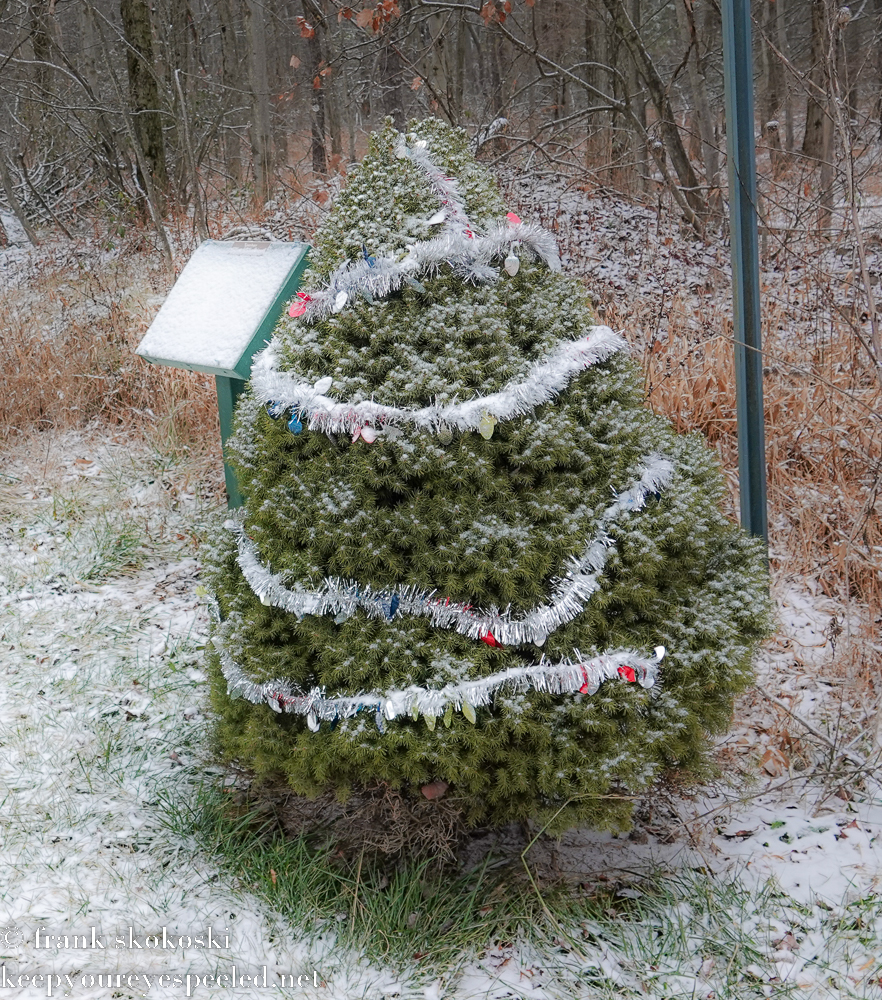 It is  less than two weeks until Christmas. And as much as  I dislike the cold white stuff we call snow,  it does get one into the Christmas spirit. It  does for me anyways.   I loved snow in my younger years.  I looked forward to it every  Winter.  I walked many miles in hip deep snow drifts, I  sledded, ice skated and skied on the coldest of days. It was fun. But not anymore. I  don’t like walking or driving in it anymore. These old bones and muscles break and strain  much easier  now. I don’t like it but I still deal with it. 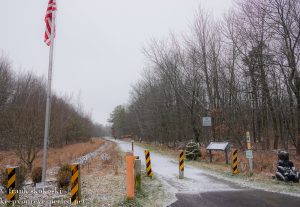 So when I awoke to find the ground covered with about an inch of  snow on the ground, with a forecast for a few more inches,  I didn’t want to drive far.  So   I decided to stay close to home and hike on the  Greater  Hazleton Rails to Trails. 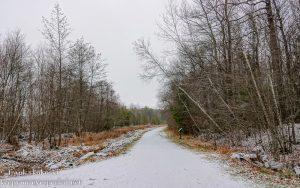 It was cloudy with temperatures in the mid 20’s when I arrived at the parking lot on Broad St. The snow wasn’t deep so it was easy walking on the trail. There was just enough snow to create a winter wonderland.  I have to admit  I enjoyed the Wintery scene . It brought back  happy childhood memories of  many a snowy Christmas, and  also reminded me of many scenes in movies and television shows depicting the perfect Christmas setting. These scenes  always included snow. 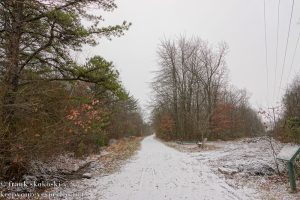 I began my usual 5 mile hike on the trail and encountered a gentlemen walking his dogs at the onset, then another young man walking back from his mile hike ( I knew this because our tracks were the only ones in the freshly Fallen snow). I didn’t see another person on my hike.  I got to enjoy the Wintery scene in the quiet snow covered  woodlands all to myself. 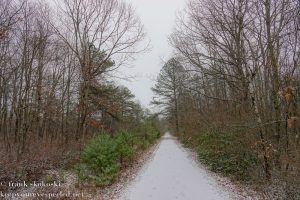 I walked under the snow covered pine, oak,  maple tree  and  mountain laurel growing along the trail. 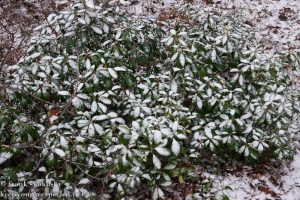 The only wildlife activity I saw was a small flock of black-capped chickadees feeding along the trail. 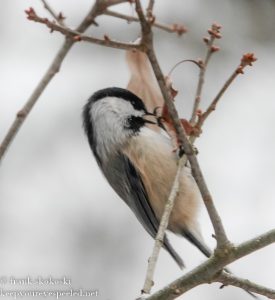 I often see these  tiny,  curious and friendly birds on my Winter hikes. They travel in flocks and usual have woodpeckers, nuthatches and kinglets accompany them.  The chickadees serve as lookouts and warn the other birds of any  hawks or other predators. There were only  the chickadees in the small flock on the trail on Sunday. 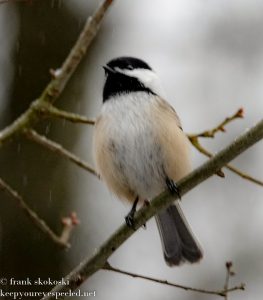 After about a mile the trail  crosses the Stockon Mountain Road, 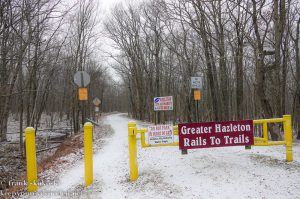 and continues on the old railroad right of way that is also an access to the Dreck Creek Reservoir by the local water company. 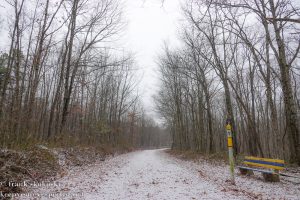 Soon after I crossed the highway, and came to the one mile mark a light snow began to fall again. I enjoyed walking in the snow and, it was here the only other human  tracks on the trail ended. I was now the first person walking in this  Winter Wonderland. 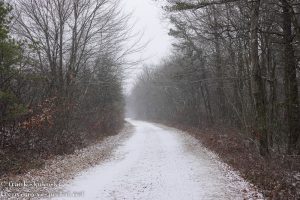 I walked past the  more  snow covered mountain laurel and 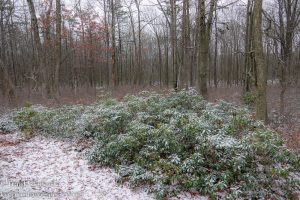 bracken ferns along the trail. 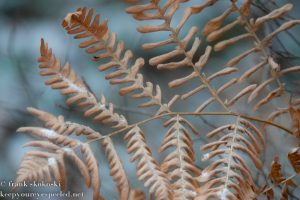 There wasn’t much color on the trail, The deciduous trees were bare now and stood out against the gray skies. This is a sassafras tree. 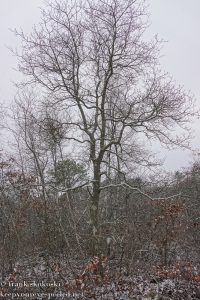 The green needles of the pitch  stood out in the  dim, gray  skies. I love their contorted shapes. 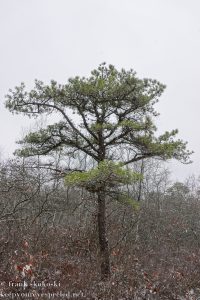 There were a few purple berries on the green briar vines but most of the  colors were white, brown and gray. 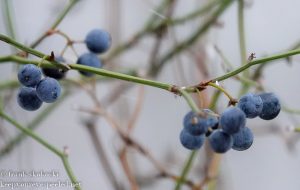 The snowfall intensified for a while making  for poor visibility on the trails. I enjoyed walking in the swirling snowflakes. I heard a few birds, more black-capped chickadees, a few crows, and some tufted tit-mice but I couldn’t see them in the falling snow. I also heard a flock of Canada geese honking on the reservoir below the trail. 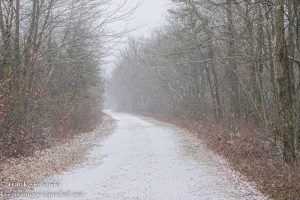 I walked out the 2 1/2 miles to the picnic area near  the crest of the dam on the reservoir. 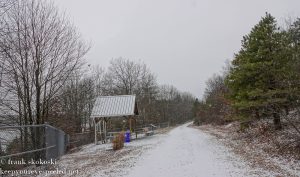 Here I turned back and had a nice, peaceful uneventful walk on the now snowier trail. I was hoping to maybe see a bear or at least some rabbits, squirrels or deer. But not as creature was stirring, not even a mouse. 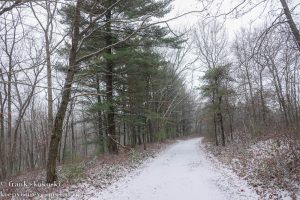 It was a quiet and reflective walk, reminding me of my many Winter walks in the woods near my home as a child.

As I was finishing my hike I noticed that some of the trees at the entrance were decorated for the Christmas scene. I didn’t notice them when I started my hike. They made for the perfect ending to my wonderful wintery walk  on the trail. It is a great place to hike, even in the snow and cold. Here is a link to a gallery on my blog website with some more photos from my hike. Rails to Trails December 11 2022. 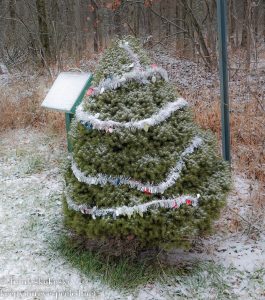 I suppose it all started with the snow. You see, it was a very special kind of snow — a snow to make the happy happier and the giddy even giddier… for it was the first snow of the season. And as any child can tell you, there’s a certain magic to the very first snow, especially when it falls on the day before Christmas. For when the first snow is also a Christmas snow, well, something wonderful is bound to happen. ~Romeo Muller, Frosty the Snowman,