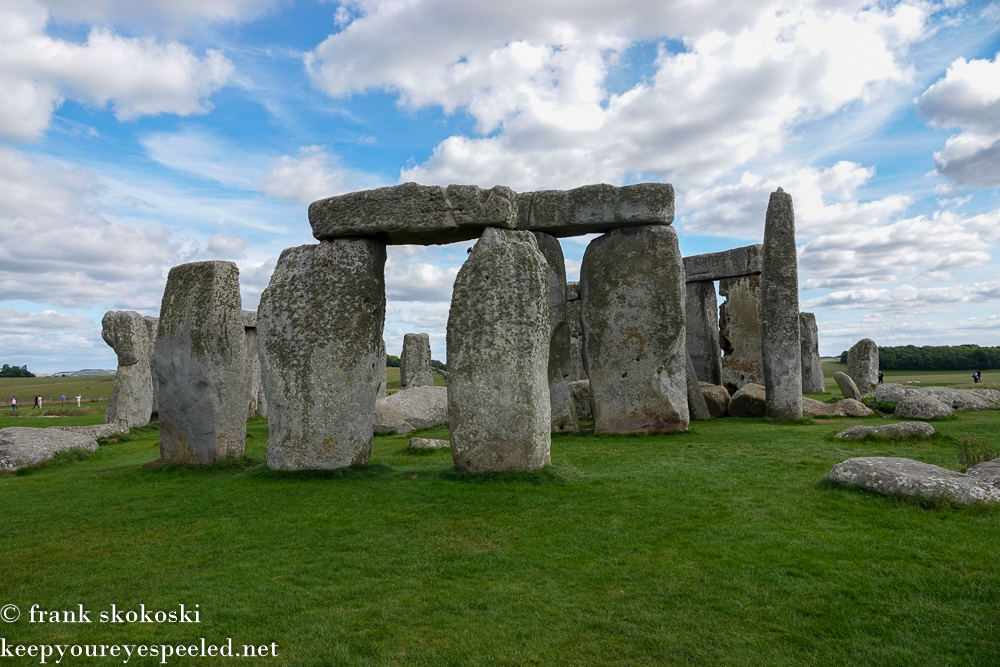 I am sure everyone recognizes the featured image photo of this blog post.  It is Stonehenge.  Most folks have seen it.   These stone pillars are one of the most recognizable structures on our planet. 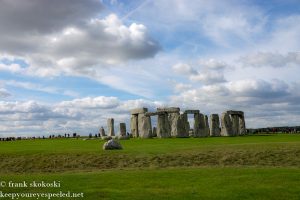 I am  not sure when I first saw or  learned  about Stonehenge. It wasn’t in my early years in elementary school, or  even in high school. I loved my geography and history classes and remember dreaming to someday visit all the exotic places I  learned about.  Stonehenge wasn’t one of them.  It wasn’t until  I was in college or maybe even law school when I first  learned of this  prehistoric wonder. And I have been fascinated  by it ever since.  It immediately  was on my bucket list of places  I dreamed to visit.  I have been fortunate and visited a lot of  the places I dreamed of as a child. the Pyramids, Ayers Rock, and the Great Wall of China to name a few.  I can now cross off Stonehenge, this amazing monument to human  determination, inspiration, and curiosity, from the list.  I was able to visit to this famous stone monument on my recent  trip to London. 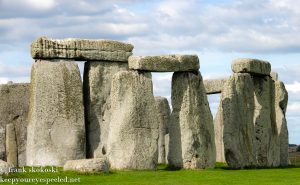 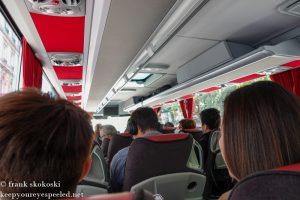 And it was even worse when we were stuck in very heavy traffic in the city as a result of the crowds of people who were  here for  Queen Elizabeth’s funeral the next day. We slowly made our way out of the city.  It delayed our trip by almost an hour. However, I enjoyed observing the neighborhoods of London as we  crawled through the traffic.. 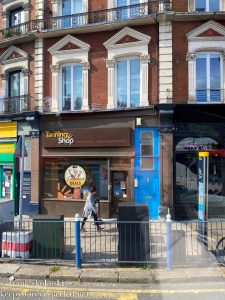 We finally made it out of the  crowded city and onto the highway. It was a nice ride  on a pleasant September afternoon. . I enjoyed the passing scenery and had a  nice conversation with a pleasant young surgeon who just arrived from Trinidad and Tobago and  was traveling with her mother. 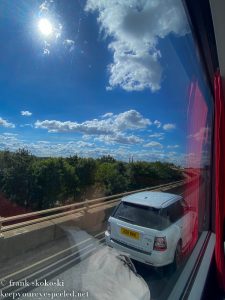 I was happy to learn we were stopping for a break shortly after we left the heavy traffic of  London. I visited the bathroom and did not drink anymore coffee. 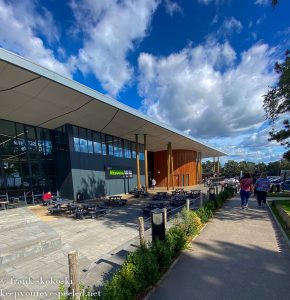 We continued our drive through the scenic rural countryside, 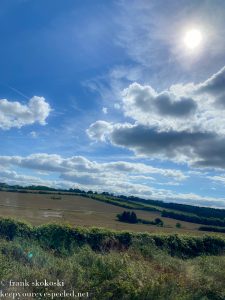 and towards the southeast of England. We arrived  at Stonehenge around 1 :15 p.m. ,  almost an hour late,  because of the heavy traffic. It was a short tour, really just a bus ride to the site and we were on our own until 3 p.m.   Stonehenge is a UNESCO World Heritage Site since 1986. 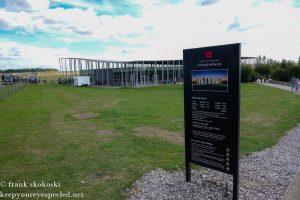 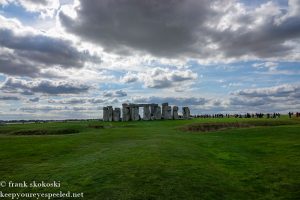 It was a thrilling experience to approach the ancient ruins and see them for the first time.  I  imagined the generations  who visited it over the centuries.   I  wondered what inspired these men and women to erect such a monument? .   How did they arrange the stones to the sunrise on the Summer and Winter Solstice?  How did they transport the huge stones? I thought of the  thousands of seasons these stones sat here since they were set in place  almost 5000 years ago.  5000 years,  think about this, it is truly amazing. 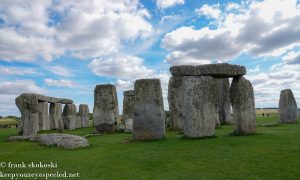 I followed the  crowds of people and  I neared the ancient stones.   It was an awe inspiring experience. I was fascinated by this ancient monument not only because of it’s historical, religious  and cultural significance but also because of it’s use as a calendar. The knowledge of astronomy these so called “primitive” people possessed  was amazing. I only read a little about the monument but knew it was designed to align  with the rising sun on the Summer and Winter solstices. 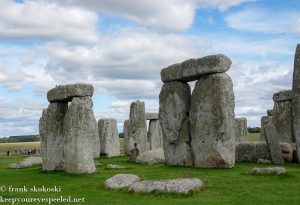 I was now able to see the massive effort it must have taken to build this huge monument.  I had some basic knowledge of the structure and knew that the   inner stones of the circle,  the bluestones, were the older stones. They were transported about 180  of miles from the hills in Wales around 3000 B.C.

About 500 years later  the much larger sarsen stones were added to the monument. These huge stones were quarried  from areas much closer to the monument but still  required  great efforts  of engineering to transport them top the site.

I walked around the circle of stone imagining the ceremonies that took  place here so long ago and for so many centuries. 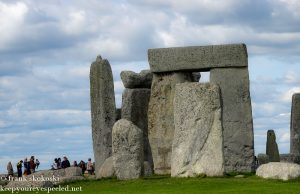 The cumulus clouds in the blue skies made for some beautiful  photographs. 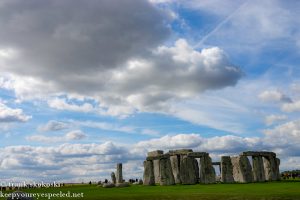 I came to arrows that pointed to the direction of  the rising sun on the Summer , 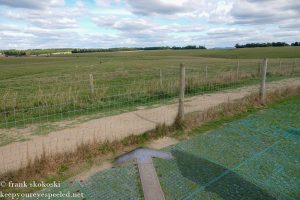 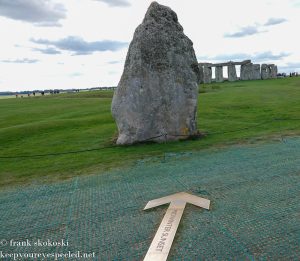 I again  imagined the ceremonies that took place here in the distant past.  Large crowds still gather here on the Solstices and Equinoxes to greet the rising sun. Until recently people where allowed to walk among the stones but this area is now restricted to special tours. It was too late for me to have arranged one. I hope to return someday. 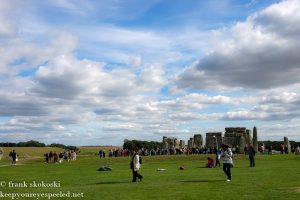 I only had only about an hour remaining on my visit so I took in a final look at the stones and decided to take the one mile walk back to the visitor center. 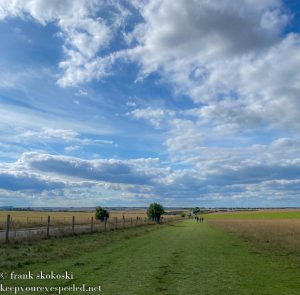 It was a reflective walk under the thickening  clouds. Here is a link to a gallery on my blog website with more photos from my  visit to Stonehenge. London Day Four Afternoon September 19 2022, 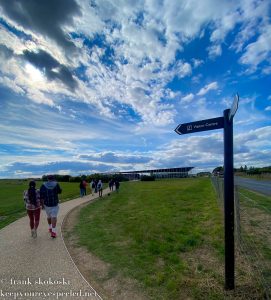 When I arrived at the visitor center I quickly toured the many exhibits, 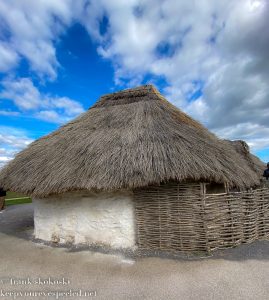 some showing how the Neolithic  peoples who built Stonehenge lived. 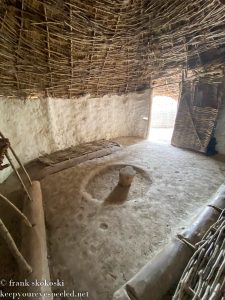 Other exhibits showed how it was believed the large sarsen stones were transported to the site. 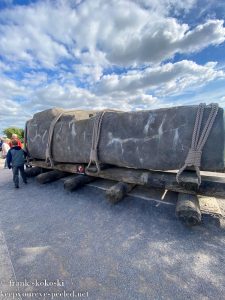 There were also many exhibits inside, including artifacts found at the site.

It was nearing 3 p.m. and I learned we would not be provided with the lunch we were promised. I quickly purchased, and ate , a cheese sandwich before boarding the bus for the ride back to London. There was little traffic on the highway and I again enjoyed the passing scenery. 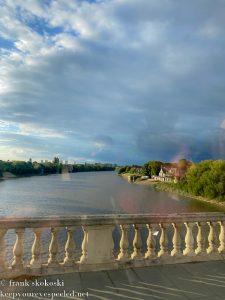 We made it into downtown London fairly quickly too and I  again took in the sights along the way. 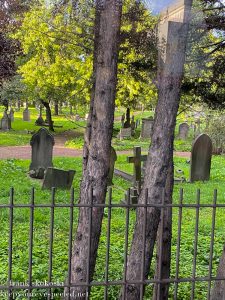 t was around 5 p.m. when our bus became stuck in a traffic jam which we later learned was the caused by the arrival of  President Biden in London to pay his respects to the Queen. Traffic did not move for an hour. The bus driver, at first refused to allow us to leave the bus. After a revolt we finally  we left off of the bus. I joined a group of passengers who roamed the crowded streets of London looking for a underground station. 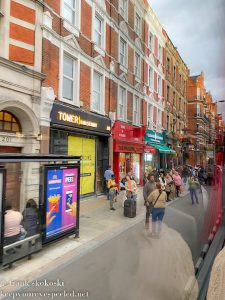 We finally found on and I was on a crowded train on the way back to my hotel. It was almost 7;30 p.m. when I got back to my room. Here is a link to a gallery with some photos from my visit at Stonehenge and bus ride back to London. London Day Four  Afternoon bus ride. September 19 2022. 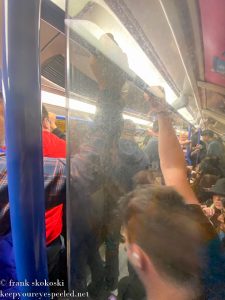 I was exhausted and starving so I decided to eat at the hotel. I  called room service and had another delicious vegan burger and  Caesar salad in my room. It was a long and tiring day but I enjoyed it,  especially my  short visit to Stonehenge.  I retired early looking  knowing it would be another long day trying to find a good spot to watch the  historic and sad  funeral procession of Queen Elizabeth II. 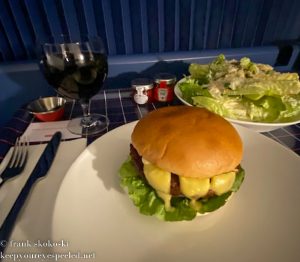 Death comes to all, but great achievements build a monument which shall endure until the sun grows cold.   Ralph Waldo Emerson 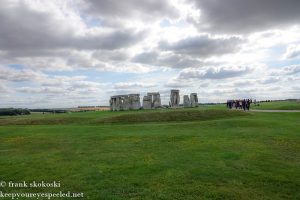