More Ice And Snow At The PPL Wetlands.

February 4, 2019 / fskokoski@gmail.com / Comments Off on More Ice And Snow At The PPL Wetlands.

More Ice And Snow At The PPL Wetlands. 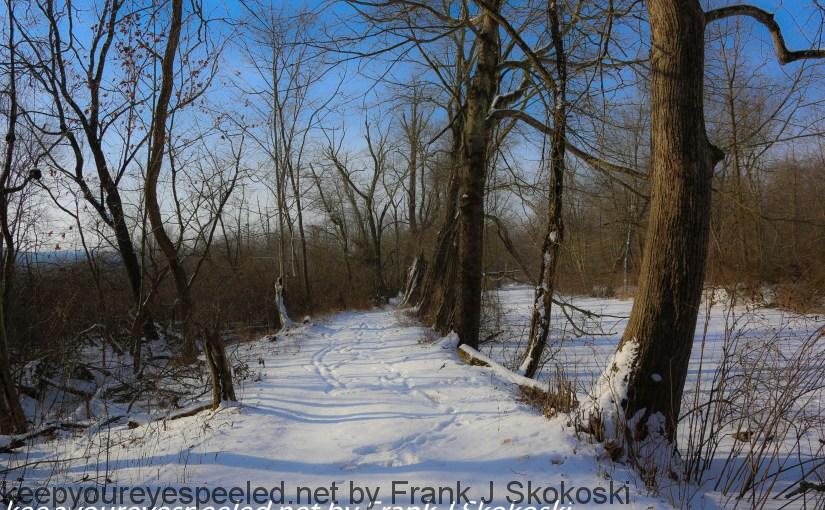 In my last blog post about   the PPl Wetlands in Salem Township three weeks ago I  commented on the return of the cold,  ice and snow.

Well it got colder and so the ice thickened and some more snow fell. Fortunately, a rain storm had melted most of the snow near the river when I hiked there last Sunday. Walking was not as difficult as it was in the woods near my home. However I found the Lake Took-A-While was almost completely covered in ice.

There was still some open water where a small stream flowed into the lake and here I found some bufflehead ducks,

and golden eye ducks sharing the last open water in the wetlands.

It was mostly overcast with temperatures in the teens during my hike.  I walked past the lake and along the Susquehanna River.  I was surprised to find some ice floating on the river.

It had been colder in our area but not as bitterly cold as some years. I watched the ice flow on the river for a while  and continued on my hike. I saw a few flocks of geese fly overhead seeking the open waters of the river.

I walked into the wetland section of the park and found the ponds and canals frozen.  I encountered a few of the usual winter birds,  including black-capped chickadees, nuthatches , cardinals

and this brown creeper.

I walked back to my car parked near Lake Took-A-While seeing a few sparrows on my way.

Here is a link to some more photographs from my hike in the wetlands. PPL Wetlands. January 27 2019

After my visit, arctic cold moved into Northeastern Pennsylvania the following week. Temperatures dropped to -8 degrees and we received more snow. Of course I had to visit my favorite hiking area last Saturday.

I found a lot more ice flowing on the Susquehanna River. It was  warmer  on Saturday but still a frigid 13 degrees when I arrived.

It was sunny.  The  early February sun warmed the air. I found I wasn’t the first person to visit the wetlands. I followed  few sets of human tracks that led me  to a canal. The canal was frozen solid and the owners of the tracks stopped to make some snow angels in the powdery snow.

I walked through the wintry wonderland created by the arctic cold.

I encountered a number of downy and hairy woodpeckers on my walk,

as well as some nuthatches and

I also inspected the skunk cabbage that sprouted in the warmth of December. They seemed stunted in their growth but were still surviving.

I continued my hike to the riverlands section of the park and found Lake Took-A_While to be completely frozen.  There were no ducks or geese on the waters of the lake on Saturday.

However, as I again walked near the river I did see some common mergansers flying over the ice.

I returned  to the lake as clouds moved for my walk back to my car. It was a frozen, but beautiful world at the wetlands. I appreciate the beauty of the cold but I am hoping it is gone when I visit again. Here is a link to some more photographs from my hike in the wetlands. PPL Wetlands February 2 2019.

“Over the wintry
forest, winds howl in rage
with no leaves to blow.” ― Natsume Sōseki