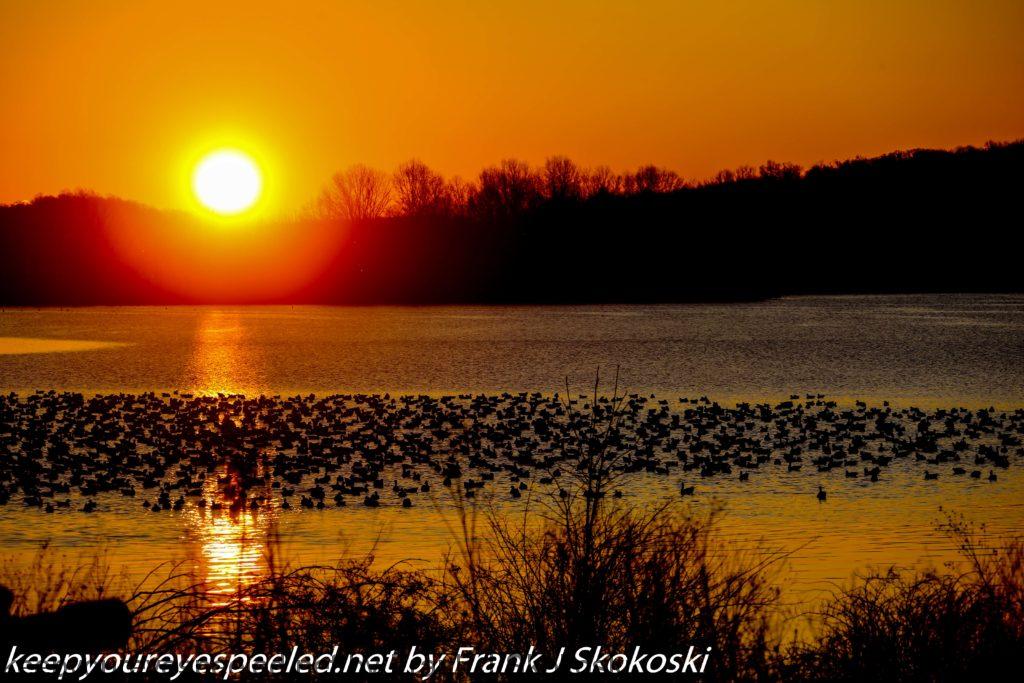 Last Sunday I drove to the Lebanon Lancaster County line in southeastern Pennsylvania to experience the Middle Creek magic show put on by the migrating snow geese. This weekend I returned, with my brother Mike and his son Mike Jr. It was the 14th straight year we have made the 75 mile drive to the Middle Creek Wildlife Management Area to enjoy the show put on by the snow geese. 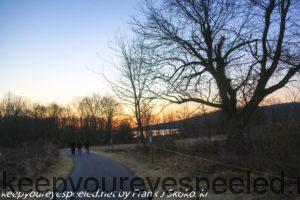 The weather  was almost identical to my visit last week. Clear blue skies and temperatures in the low 20’s. Like my visit last weekend, we arrived in the morning twilight just as the sun was appearing over the lake. 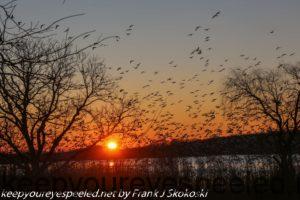 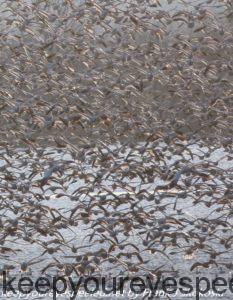 Still, even with the reduced number watching 25,000 mostly snow-white geese take off in large number in the morning sunshine is something you never get tired of seeing. 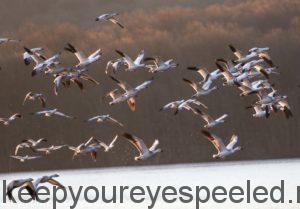 The adult snow geese are white, 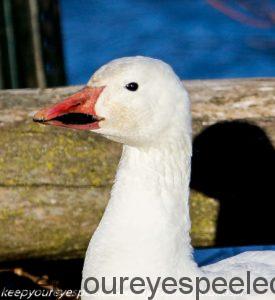 but the juveniles are blue, and gradually become white. 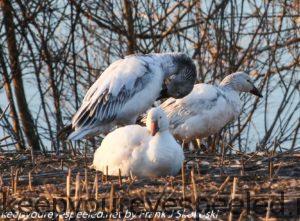 We watched a few flocks take off into the clear blue skies as the newcomers to Willow Point gasped at the awe-inspiring sight, even with the much reduced numbers. Goose watching is fun. They are so graceful in flight. 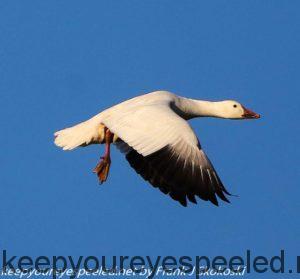 And even so when making difficult landings on the shore. 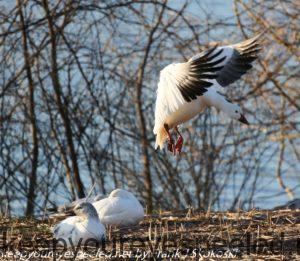 We watched the geese for about an hour, enjoying the Middle Creek magic,  and then walked  the half mile back to our car, seeing a red-winged blackbird, 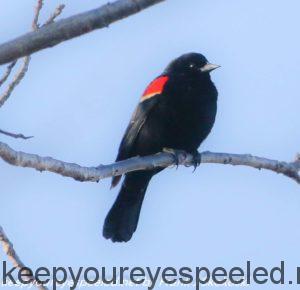 and a song sparrow singing in the morning sun on the way. 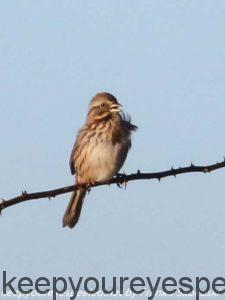 There were a lot fewer visitors this week too, but still  some of the local Amish folks who came on their horse-drawn buggies which they left  in the  parking lot. Here is a link to a gallery with more photographs of the snow geese in the morning.   Middle Creek snow geese March 1 2020. 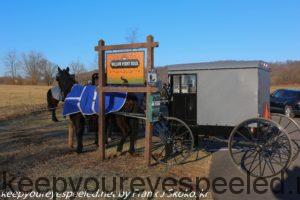 After leaving the viewing center at Willow point we drove along the access road that opens March 1. The countryside surrounding the lake is beautiful. 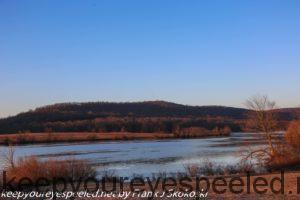 Some years there are flocks of snow geese feeding in the fields, but not this year. We drove to the north side of the lake and spotted some common mergansers, this is a male, 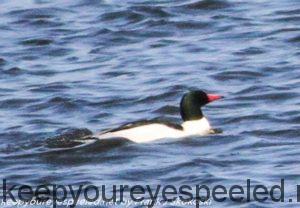 and this  beautiful male hooded merganser, on the  lake. 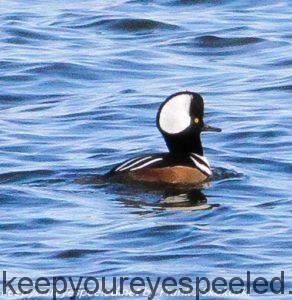 This is a female. Such beautiful ducks. 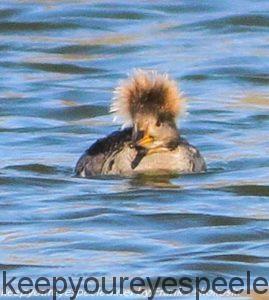 As we watched the mergansers a juvenile bald eagle flew overhead. 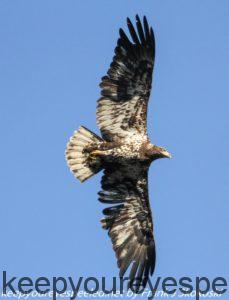 What a beautiful sight. I am sure it was looking for a wounded duck or goose on the lake. We watched it soar overhead  and hoped to find the parents. But no such luck.  Here is a link to a gallery with more photographs of this juvenile bald eagle. Middle Creek bald eagle March 1 2020. 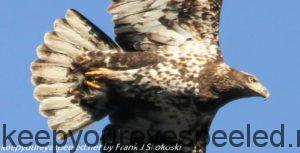 We continued our drive along the tour road and came to some small ponds along the road. Some were frozen but others had open water and attracted many  species of  beautifully colored ducks, including these pretty male red-headed ducks. 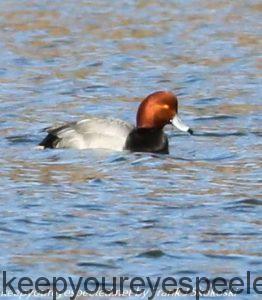 I am not a bird or duck expert so I appreciated the help in identifying  these beautiful water birds from my brother and nephew. This is a lesser scaup. 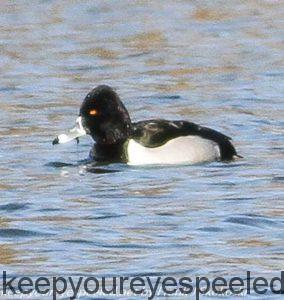 We saw a group of northern  shoveler  ducks on the lake. They were swimming in a circle using their large spoon-shaped bill to filter seeds and small insects and mollusks in the water. 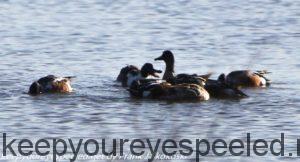 These beautiful ducks do not breed here and are on their way to nest in the prairies of the midwest. 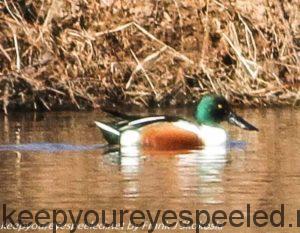 There were a few ring-necked ducks on the pond. They seemed to enjoy mingling with the other species of ducks. 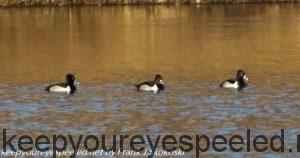 A few black ducks  hugged the far shore of the pond. 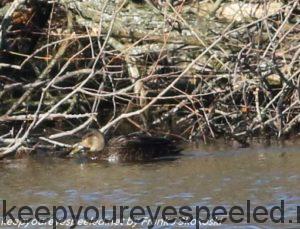 And finally there were a few of the more common male mallard ducks fighting for the attentions of the only female. Some of the males would engage in skirmishes with the other males while other would pursue the female. Duck watching is fun.

Especially in the early March sunshine and with views of the pastoral countryside that surrounded us in Middle Creek. 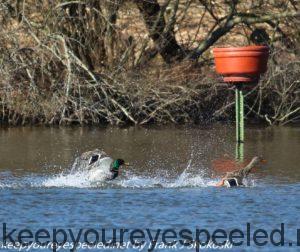 In addition to the eight  species of ducks we also saw some more Canada geese, blue herons and a flock of tundra swans. The tundra swans are so graceful and elegant when in flight. Here is a link to a gallery with more photographs of the colorful ducks and other birds we observed in the morning. Middle Creek ducks March 1 2020.

After about an hour or two of driving the tour road and observing the colorful ducks we reluctantly had to leave. Although  some of the ducks may and Canada geese may remain the snow geese will be gone until next Spring. 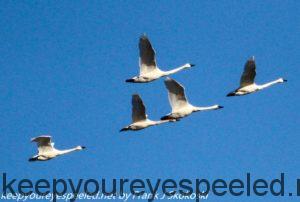 We decided to take another route home and enjoyed the scenic countryside in the March sunshine. 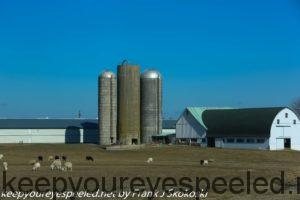 A lot of history in this area and I hope to return and explore it some day. 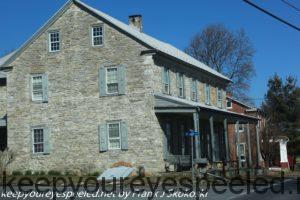 Of course we had to stop to eat and made a good choice in deciding on Robert’s diner in Richland. It was good. Here is a link to some more photographs from our journey home. Middle Creek drive home March 1 2020. 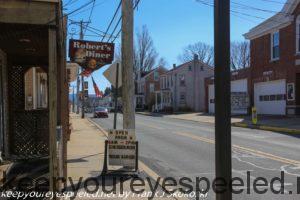 “It’s a bird of some sort. It’s like a duck, only I never saw a duck have so many colors.” The bird swam swiftly and gracefully toward the Magic Isle, and as it drew nearer its gorgeously colored plumage astonished them. The feathers were of many hues of glistening greens and blues and purples, and it had a yellow head with a red plume, and pink, white and violet in its tail.”
― L. Frank Baum, The Magic of Oz 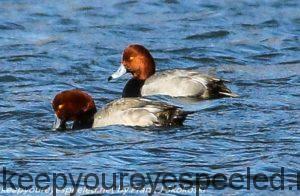