My First Hike At The Austin T Blakeslee Natural Area in Monroe County.

My First Hike At The Austin T Blakeslee Natural Area in Monroe County. 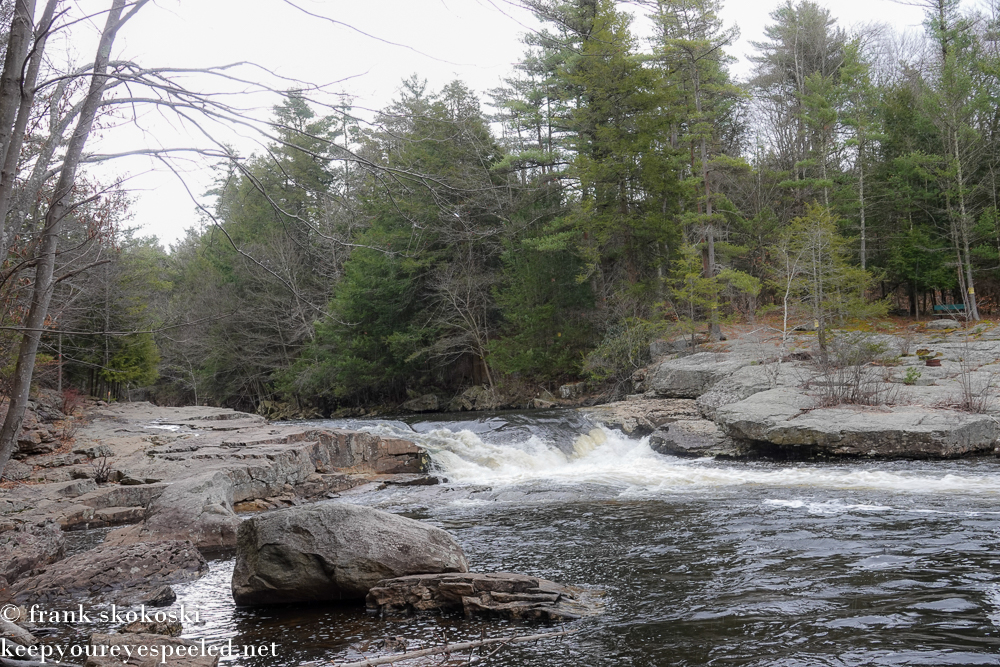 I am having some remodeling work done on my home,  My contractors arrived early Saturday morning.  One of the contractors  asked me where I was going to hike that morning. ( They knew I hiked somewhere every weekend)  I said I hadn’t decided yet. He suggested I should try the Austin T Blakeslee Natural Area in Monroe County.  I was never there before and I soon  learned it is about 35 miles from my home. It is right off of Interstate 80 and is only a 35 minute drive from my home in Hazle Township, Luzerne Count .  I was soon on my way. 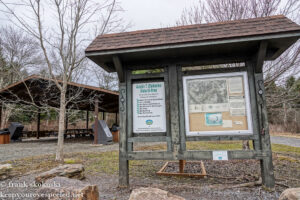 It was an overcast and cool March day when I arrived. The temperature was in the mid 30’s.  The  lower parking lot was located near the Tobyhanna Creek. I walked to the river, and as I did, a bald eagle and kingfisher flew over my head. They flew to fast for me to capture an image but I was glad to see them. Their presence hinted there must be a lot of fish in the river. I wo 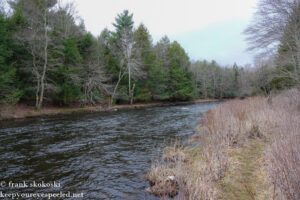 uld learn later it is a good fishing area visited by many local fishermen including my brothers and nephew.

I also learned there was once an amusement park here and that it was destroyed in a flood in the 1950’s. The park was taken over by the county and named after a local conservationist Austin T Blakeslee. There was a grove of tall spruce 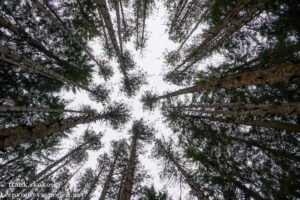 and pine trees near the parking lot. 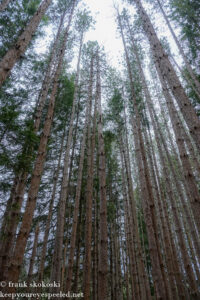 The trail continued above the swift flowing waters of  the Tobyhanna Creek. Tobyhanna  is a Native American  word that means ” a stream whose banks are fringed with alder” and that it  is a tributary of the Lehigh River.  I hope to learn a lot more about the creek and this area. 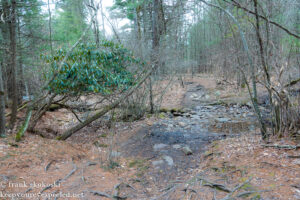 The trail was muddy from  runoff of the melting snow and small springs. There were  sawed of slices of tree trunks placed across some of the wetter areas of the trail. 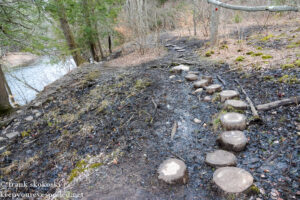 There was a bridge out along the trail but it  was fairly easy to cross the stream it spanned. I walked past the many skunk cabbage were emerging  in the wetlands along the trails. 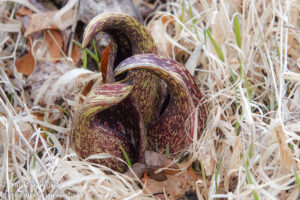 The trail became rocky as it  approached the Tobyhanna River.

A spur of the trail  trail descended the  banks of the creek  above the  Tobyhanna Falls. I didn’t realize that there was a small scenic waterfall here until I saw a sign later on the trail. 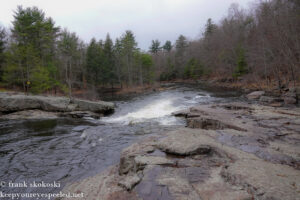 I left the river and climbed back up to the trail. Here there was a choice. One could follow the blue marked Highland Trail or the red marked Creek Trail. I decided to walk the Creek Trail first. 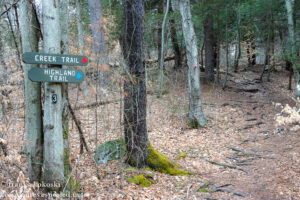 The trail continued through a mixed oak/beech/hemlock forest, here if found partridge berries and 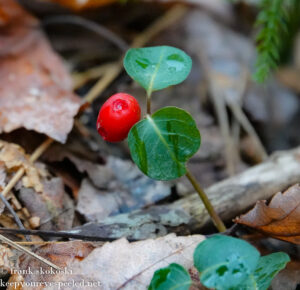 tree-clubmoss or ground pine growing along the trail. 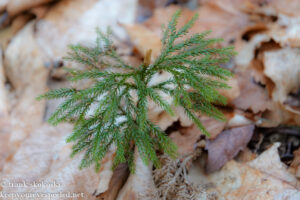 As the trail approached the creek  again it crossed some more open woodlands where I found many  northern highbush  blueberry  growing. They were  known as “swampers”  by the old timers in my hometown. I will have to visit this area when the ripen in mid-July for two reasons, first to pick these delicious berries and second, to hopefully see some black bears who also love this tasty fruit. I followed the trail along the creek. 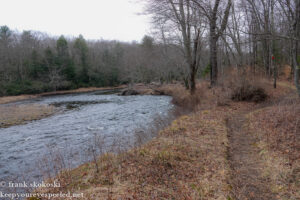 It was a nice walk along the banks of the creek. There were many benches along the way. 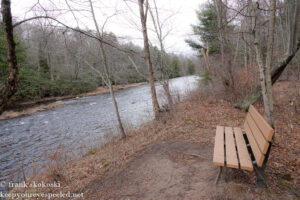 I was disappointed that I saw no water birds on the river and few birds in the woodlands.  I did see this eastern phoebe, 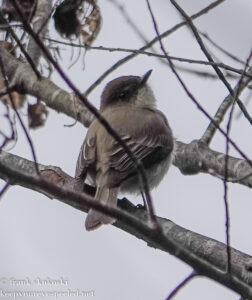 and a lot of brown creepers. 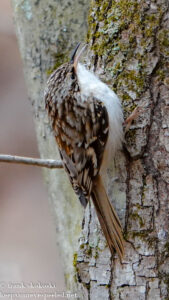 In fact I never saw this many brown creepers in one area. I must have saw a dozen of them crawling up the trunks of the trees along the trail. 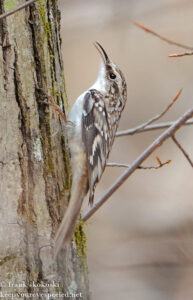 The trail followed the creek  until it ended   near a housing development. I turned around and followed the trail back until I came to the intersection with  the  Highland Trail. 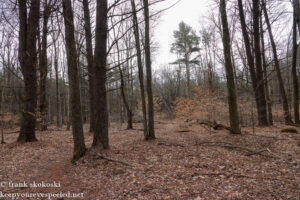 I hiked up to the Highland Trail and followed it through an old forest of mixed hemlock, oak, black cherry and beech trees. 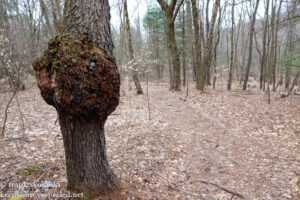 The trail eventually returned me   to the main trail.   I decided to hike back  down to the creek to get a better look at the  Tobyhanna Falls.

I walked on the wet and slippery rocks along the creek as some snow flurries fell from the  cloudy skies. 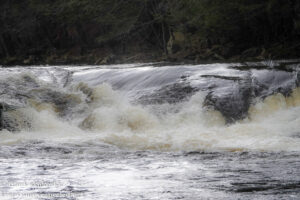 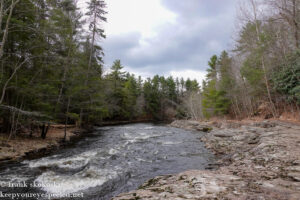 I followed the third hiking trail, with orange markings, the Pine Trail. Here I found a lot of intermediate wood ferns, 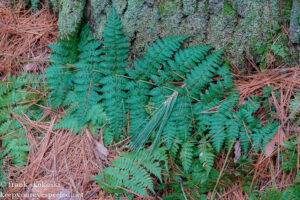 and garlic mustard growing along the trails. It was nice to see these green colors after only seeing the brown, grays and whites during our long Winter 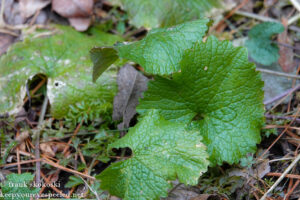 I also came across this pine tree, still decorated  from the Christmas season, 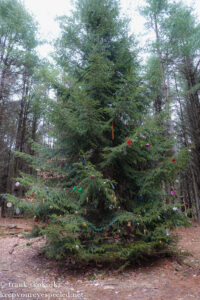 The trail took me back to the main trail and to the parking area.  The snow flurries had ended and there were now  breaks in the clouds. I saw a few American robins, 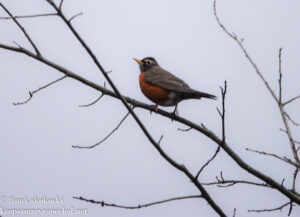 and a small flock of black-capped chickadees along the creek. 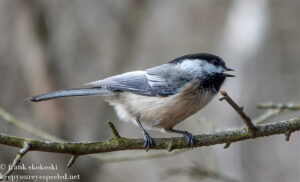 I walked back down to the creek one last time and  and finished my five mile hike.  Here is a link to a gallery with some more photos from my hike in the natural area. Austin T Blakeslee Natural Area March 26 2022. 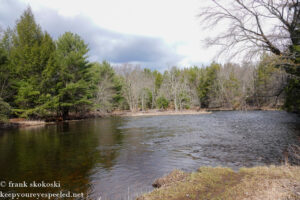 Although I didn’t see a lot of wildlife on this hike I am sure I will on my future hikes here at the Austin T Blakeslee Natural Area.  And I am sure, God willing, there will be plenty more hikes in this wonderful  little nature preserve. 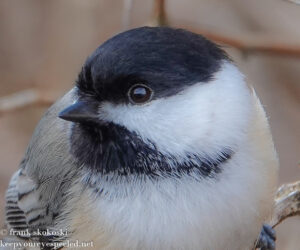 The woods are made for the hunters of dreams,
The brooks for the fishers of song;
To the hunters who hunt for the gunless game
The streams and the woods belong.
(Sam Walter Foss, The Bloodless Sportsman)