New Zealand Day Eighteen: A Morning In Matamata And An Afternoon In Auckland

April 19, 2019 / fskokoski@gmail.com / Comments Off on New Zealand Day Eighteen: A Morning In Matamata And An Afternoon In Auckland

New Zealand Day Eighteen: A Morning In Matamata And An Afternoon In Auckland

I was up early my second morning in Matamata. I was on the road again. I scheduled another bus trip to Auckland at 8: 20 a.m. I needed to get my morning walk in. I never miss morning walk at home. It has been a part of my daily routine for almost two decades. So I was walking through the streets of Matamata in the morning twilight.

Well, you might say in the  morning darkness. It was overcast with a light drizzle as I  walked  to  the downtown of sleeping Matamata. There was almost no traffic on the streets.

You learn a lot about a city when you explore its streets in the early morning. I didn’t have a lot of time so I walked about a mile through the empty streets. Here is a link to some more photos from my morning walk. New Zealand Day Eighteen. Matamata morning walk. February 23 2019.

I returned to my hotel, showered and packed. I arranged for a taxi to drive me  the bus stop. It was only  a 1/2 mile hike  but not an easy walk with all of my luggage. The owner at my hotel warned me that the taxi may not show up. He didn’t. Luckily, I listened to the manager and left plenty of time for me to walk to the bus stop with my luggage.  All well that ends well and I was soon waiting for  my bus for the four-hour  ride to Auckland.

This time the bus was crowded. No window seat for me this time. We changed buses in the town of Hamilton and my new bus was even more crowded. I did the best I could to watch the changing scenery of the passing countryside but it was easy without a window seat.

I spent the time reading about things to do in Auckland and catching up on my sleep. We arrived in downtown Auckland around 12:30.  I made the mistake of walking to my hotel, The Hilton Auckland.   The walk was again, only about a 1/2 mile, but there was a lot of traffic  on the route to the hotel. And the sidewalks were not designed to pull two large pieces of luggage.

I eventually made it to the hotel and learned my room wouldn’t be available until 3 p.m.  I hadn’t eaten so I grabbed my camera and went to find some food and explore the city.

I was surprised to find the Queen  Victoria docked alongside my hotel.  I wondered where is was going and later learned it was halfway on a cruise around the world.  This would be a dream trip. Someday, God willing. 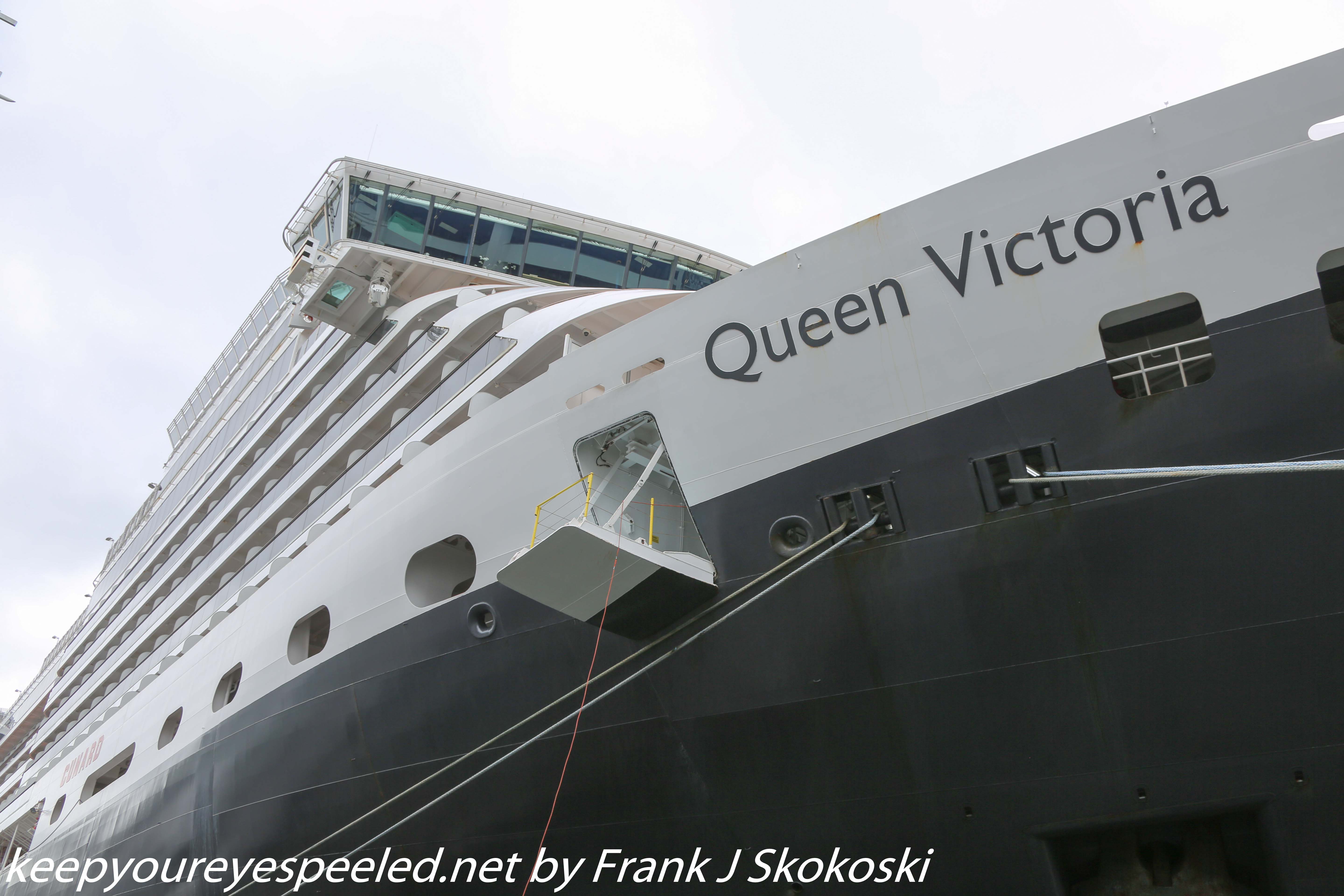 I was told there were some good restaurants near the fish markets a few blocks from the hotel. I walked along the streets of the Auckland piers enjoying the late summer sun and warmer temperatures. 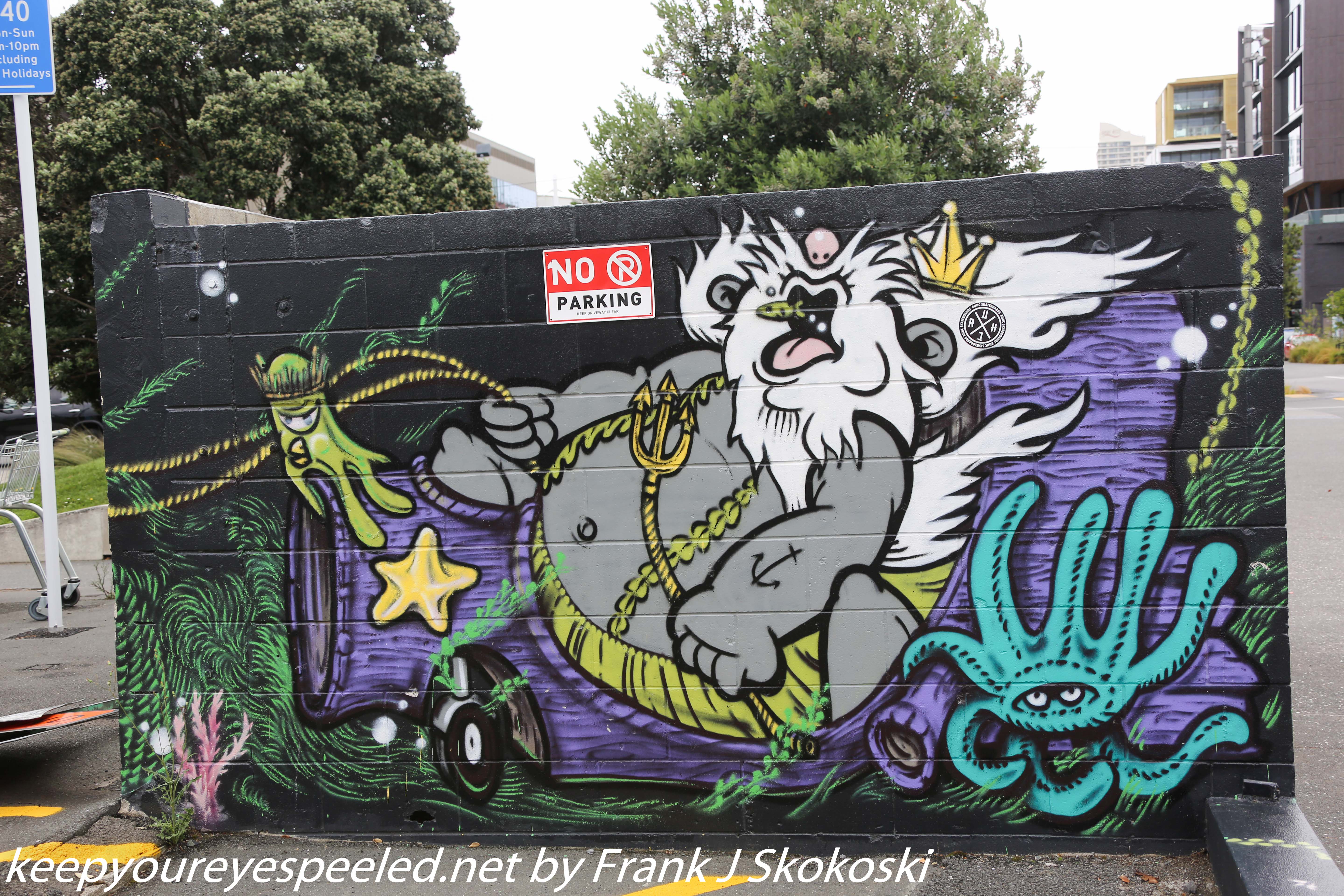 Always in the distance was the Sky Tower one of Auckland’s famous landmarks.

Like most harbor cities, there were plenty of boats and yachts in near the waterfront.

I did find a nice restaurant near the fish markets and enjoyed a pleasant conversation with my young.  Russian waitress. She had just arrived from St. Petersburg and we talked about our impressions of New Zealand and the world. Here is a link to some more photos from my first walk in Auckland. New Zealand Day Eighteen afternoon walk. February 23 2019.

I headed back to the hotel to see if my  room was ready and it wasn’t.  I wanted to explore the city and asked for some advice at the iSite information area. They recommended a  visit   to the seaside suburban village of Devonport.  So I was soon on the ferry that travels the two miles across  Waitemata Harbor to this historic village.

I  learned that the three hills on the peninsula on which the village is located were once ancient volcanoes.

Once again the captain of our ship provided us with much information on the  history of the village as we cruised the harbor.

I signed up for a tour of the town and was soon on a bus with another very informative guide.  We learned about the early Maori history of the peninsula as well as it’s later significance as a  port  for the British navy.

We toured the fortifications on North Head on of the three ancient volcanoes.

And also visited Mt. Victoria and its magnificent views of the harbor and Auckland’s skyline in the distance.

We drove the streets learning about the local history and how it has changed from a poor working class town to a suburb for the wealthy professionals of Auckland.

It is quicker to take the ferry into  downtown than to drive in the busy rush hour traffic. We drove by this golf course with the Sky Tower of downtown Auckland in the distance.

We were dropped off at the dock and I had a 1/2 hour to roam the streets of downtown Davenport.

It was an upscale tourists town with many shops and restaurants. Once again I found myself wishing I  had more time to explore this historic village. However, I had to catch the ferry for my ride back to downtown Auckland.  Here is a link to some more photographs from my visit to  Davenport. New Zealand Day Eighteen Davenport February 23 2019

It was late afternoon when I returned to my hotel. My room was finally ready. It was a nice room but I didn’t spend much time there. I was soon back out exploring the streets of Auckland.

I love cities. I can roam their streets for hours, observing people, building, billboards, parks, shops and restaurants.

I left the waterfront and walked through the busy streets of downtown Auckland.  Rush hour was ending but there were still many tourists, commuters and local residents walking the streets, looking for a place to have dinner or a drink.

I walked up a hill and found myself  beneath the large twisted trees along Albert Park.

Leaving the  quiet of the park, I soon found myself in the midst of a bustling modern city.

Large building towered over the busy streets, including the famous Sky Tower.

I walked back down the hill to the waterfront,  seeing some interesting murals,

and billboards along the way.

There was a mix of the old and new in the city.

It was getting late. The sun was setting and I was hungry and tired.  It was a long day. I always love to eat in a big city. And Auckland had plenty of good choices for some fine dining. However, I was too tired to wait for a meal. I decided to have an ice cream cone and a large bag of trail mix for dinner.

I watched the sunset from outside of my hotel. It was another great day in New Zealand and I had an early tour to Tiritiri Matangi Island. I was soon sound asleep inside my room. Here is a link to some more photographs from my evening walk. New Zealand Day Eighteen Auckland evening walk February 23 2019

There’s a real purity in New Zealand that doesn’t exist in the states. It’s actually not an easy thing to find in our world anymore. It’s a unique place because it is so far away from the rest of the world. There is a sense of isolation and also being protected. Elijah Wood