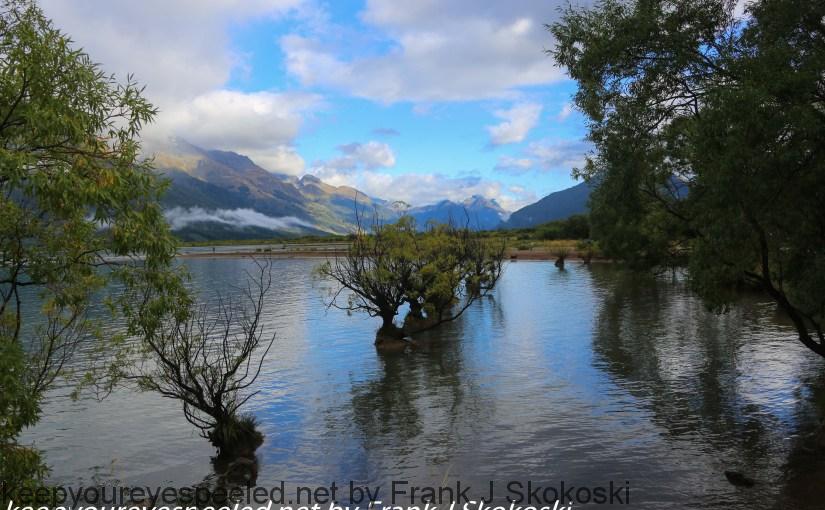 I’ve only been in New Zealand a week and it seems like months. Such a wonderfully adventure. I’m finally able to put together a blog post because of  a most disappointing change of plans. My airplane flight to Milford Sound was cancelled because of low clouds. This was going to be one of the  highlights of my trip.

But to travel is to expect the unexpected.  I immediately made  alternate plans. Queenstown is too touristy for me.   I wasn’t going to spend the day in this tourist resort. So I arranged to catch a shuttle at 8 a.m. to the tiny town of Glenorchy. I made the reservation at 7:45 a.m!

It was a good decision. I was soon making my way up the long  picturesque valley along Lake  Wakatipu. It took about an hour of driving on this  scenic highway to get to Glenorchy.

I wasn’t sure what to do until 3 p.m. when the bus returned. First I walked to the lake. What a spectacular view!

I took in the view and made my way into this very small town. A young lady at a pastry soup told me of some of the hikes in town.

I soon made my way to the Glenorchy Walkway.  The sun now broke through the clouds making for a pleasant hike under a thick canopy of trees.

Soon the large trees were replaced by lower shrubs and bushes, and another  spectacular view.

And they were filled with the songs of birds. As I have learned New Zealand birds are pretty elusive, for me anyway. Well I had better look this day. I first saw these big eyed birds again, which I have learned is a silvereye.

Then I walked into a flock of these beautiful birds. The New Zealand fantail. I watched them flashing their magnificent tails while fluttering through the trees. Here is a link to some more photographs of this fascinating bird. New Zealand fantail February 12 2019.

I walked along and through a wetland area with spectacular views of the surrounding mountains.

And wetlands mean wildlife. The ponds and lagoon were filled with ducks ,

The black swan is native to southern Australia but some have been introduced to New Zealand. And some migrate here too. Here is a link to some more photographs of this graceful bird. New Zealand black swans February 12 2019.

It was mostly sunny now and the strong late summer sun persuaded me to finding some shade to enjoy watching the swans and other wildlife on the lake and wetlands. The lakes and wetlands were crowded with many of the small diving ducks, the new Zealand scaup, shown here, as well as mallards, paradise shelducks and  even Canada Geese!

As I made my way back into town a harrier hawk flew overhead. Here  is a link to some more of the many birds I saw on my hike.  Glenorchy birds February 12 2019.

I also enjoyed observing the new and strange plant and flowers I found along the trail.

Although there were a lot of familiar plants too, brought by the folks from Europe. There were plenty of wild blackberries, unfortunately, still a few days away from being ripe enough to eat.

I  always look for dragonflies when I hike in the wetlands near my home. I found a few darting about on my hike. They were one of the first insects to inhabit our swamps ans wetlands and are closely related to the ones back home.

It was a delightful hike  and I was  so glad I came to this town. Here is a link to some more photographs from my hike on the walkway. Walkway photographs February 12 2019.

I left the walkway and decided to eat. There were many choices in this small tourist town and I chose to eat at the Glenorchy Cafe. I had a delicious and hearty breakfast. The meal portions served in New Zealand are far larger than the ones in the United States.

I had a few hours to explore this quaint little town. I soon learned how it began, as did much of this area, with sheep herding. Gold was soon discovered and the town grew. The beauty of the town was soon recognized and it became a tourist attraction as early as the 1860’s. However travel to the town was by boat from Queenstown. The first road was not opened until 1962.

I roamed the town, visiting  the small church,

the old and new library,

and some abandoned buildings.

I walked past the small, but well maintained homes set in this beautiful mountain scenery and imagined, as I always do on my travels,  what life would be like growing up here.

I made my way back to the wharf on the lake where I watched the swans, ducks and geese swimming in the afternoon sunlight. And the crowds of tourists, many from China, on holiday for the Chinese New Year.

Although I was still disappointed that my flight to Milford Sound was cancelled, the scenery was magnificent, and it was not a bad second choice. Here is a link to some more photographs from my walk through Glenorchy. Town Walk February 12 2019.

“Let those who wish have their respectability- I wanted freedom, freedom to indulge in whatever caprice struck my fancy, freedom to search in the farthermost corners of the earth for the beautiful, the joyous, and the romantic.”
― Richard Halliburton