No Bears In The State Game Lands, But Found Some Other Interesting Critters

May 5, 2020 / fskokoski@gmail.com / Comments Off on No Bears In The State Game Lands, But Found Some Other Interesting Critters

No Bears In The State Game Lands, But Found Some Other Interesting Critters 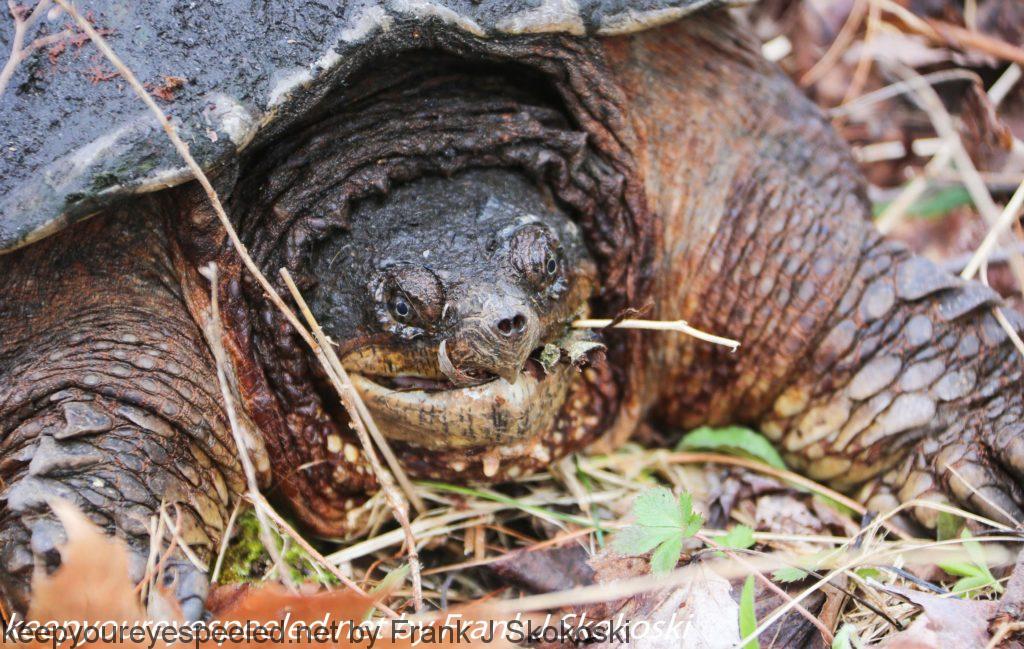 So far this Spring I have seen a lot of critters on my hikes here in Northeastern Pennsylvania.  But no bears. I usually run into a few bears in the Spring as they  awaken  from hibernation and begin foraging for food. So on Sunday, I decided to hike in State Game Lands 119 in Dennison Township, Luzerne County an area know for its bears. I have had many encounters with them there. 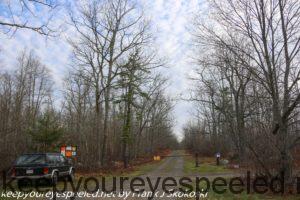 I drove the rutted dirt road from the town of Penn Lake and  arrived  at the game lands at around 7 a.m. The skies were  overcast  with seasonably cool temperatures in the low 50’s. I soon realized that the higher elevation meant  that the arrival of Spring was delayed about two weeks up here.    There were  few buds or new leaves on the trees in the mainly oak forest. One of the  sign of Spring I noticed were the new leaves of the fly poison plants sprouting in the woods  along the trail. This interesting plant was mixed with sugar and used as fly poison by the early settlers in our Commonwealth. 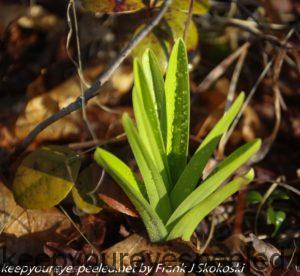 As I walked along the main road into the game lands I could hear the songs of many birds in the surrounding woodlands. However, they were not  coming anywhere near the trails and I could not get a photograph of a single bird for the first half mile of my walk.  The  clouds soon cleared and the morning sun felt good as I continued my hike. 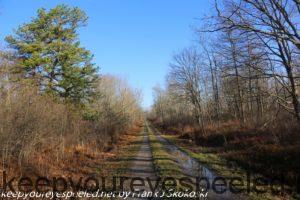 I left the main road and followed an old railroad right of way that  made its way through a wetland and down to the Black Diamond section of the D & L trail.  Here I continued to hear the bird song in the woods and was able to finally photograph this catbird. There were also a few  common yellowthroats scampering in the shrubs along the trail. 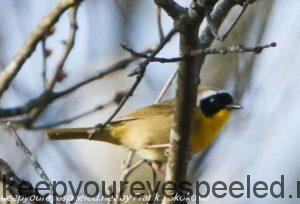 Unlike the lower , and warmer PPL wetlands in Salem Township there  was very little new growth in these wetlands on the mountain. The high bush blueberries were just putting forth the first hint of  buds. 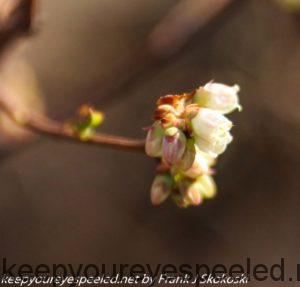 There are many of these high  bush blueberries or, as we call them, “swampers” along the trail in the wetlands. And I have had a quite few encounters with bears in this area over the past few years.  Last year I  saw a mommy bear and her cubs here and came  much to close to a large male bear.  This year no bears. Darn!. But a lot of water, the trail was flooded from the recent heavy rains. 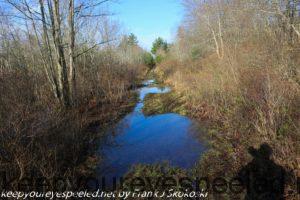 My walk   along the trail  soon brought me to  the rushing  headwaters of the Little Nescopeck Creek.  The creek neared the trail for a short distance before continuing onward through the woods. 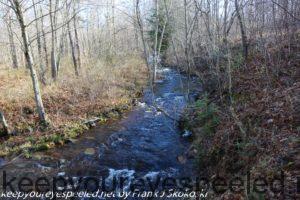 The trail descended the mountain a were large pine and hemlock trees still remained  from before the logging that took place in the 19th century. 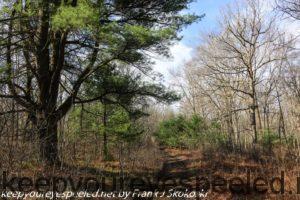 At this lower elevation I say some more birds including this yellow-rumped -warbler and. 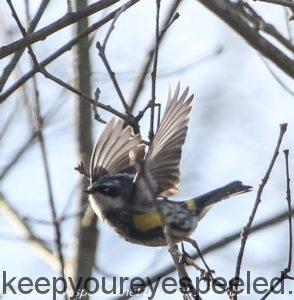 I watched the American redstart hop from branch to branch in the treetops, stopping to sing a bit, before it few off. 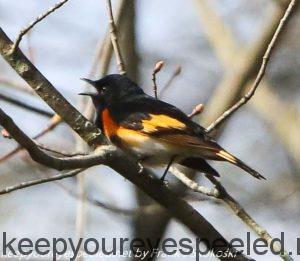 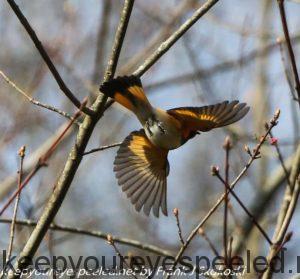 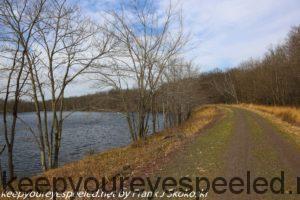 Creek flows under the trail. I followed it upward for about a 1/2 mile and came to scenic Moosehead Lake.

The serviceberry, or as we called them “juneberry” trees were now in bloom adding some color to the still drab woodlands. 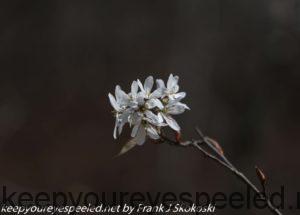 Near the lake, on the other side of the trail, is a small area of wetlands. Usually I will see a great blue heron or an osprey here. Not on Sunday, but there were a few  birds in the woodlands near the wetlands including a blue -gray gnatcatcher, 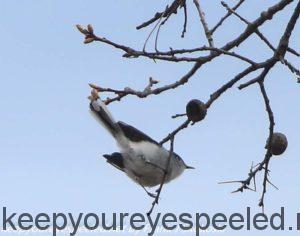 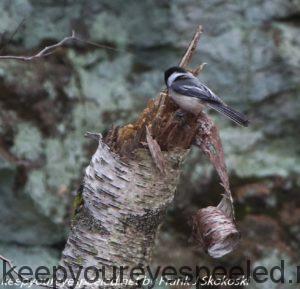 and I think this is a palm warbler. 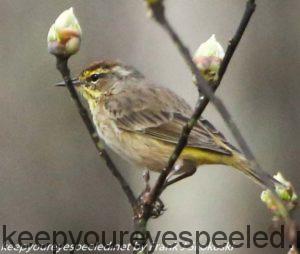 It clouded up again as I walked  along the Black Diamond trail. A few folks on bikes rode by but I didn’t meet a single hiker on my seven mile hike. 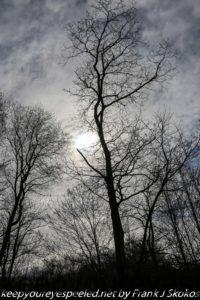 Along the trail I saw  another common summer resident of  our had returned to our area. A rufous-sided towhee. 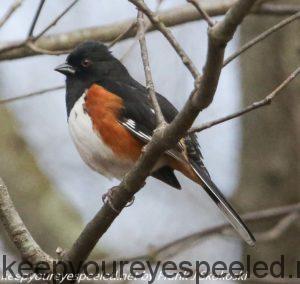 These birds were very common in the woodlands near my home when I was growing up. Although not as plentiful now they are still common and can be seen either rummaging in the dead leaves  on the ground or perched on a branch singing it song as loud as it can. Beautiful birds they are. 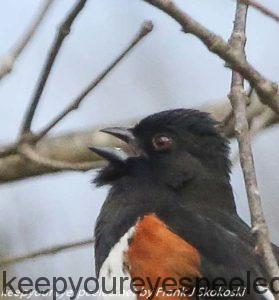 I continued my hike and. near  the small lake along the trail, 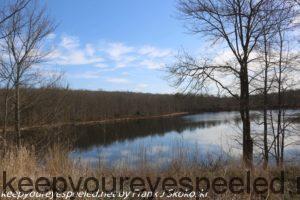 I encountered this fellow  on the steep  bank above the  lake, a  nice sized snapping turtle. 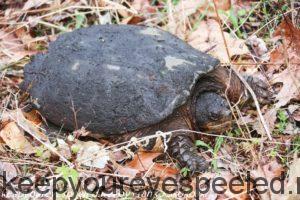 It was  not moving and may have been exhausted from having climbed up from the lake to the trail. But just because they don’t like to move doesn’t mean they can’t and I have come close too losing a finger  on my first encounters of these unusual animals many years ago. I am much more respectful of them now. 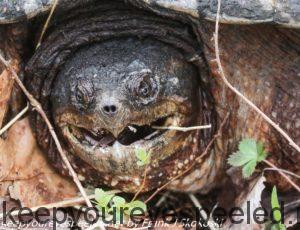 Just past the lake another old railroad rather of way intersected with the Black Diamond trail and I decided to hike this trail back up to my Jeep. In the woods near the lake I saw this pretty oven bird on a tree branch It would be the last bird I would photograph on my hike.  Here is a link to a gallery on my website with more photographs  of the birds I saw on my hike. State Game Lands Hike birds May 3 2020. 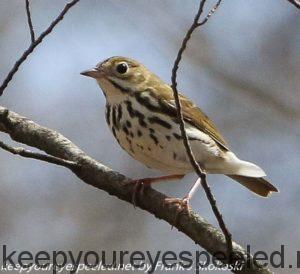 I had hope to see some birds on the lake or the adjoining wetlands. The last time I hiked here I saw both woo ducks and kingfishers in the area. Not this time. I did see an osprey but to far to get a photograph. 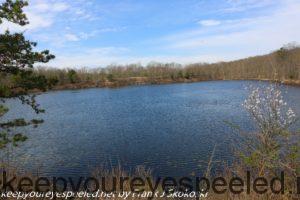 The trail now climbed back up the mountain to my Jeep. 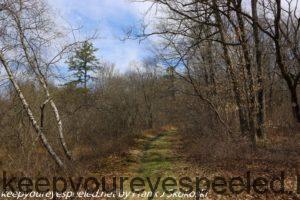 There were no birds and no bears either but I saw a patch of what I thought was skunk cabbage in the woods. I love to photograph skunk cabbage but, upon closer inspection, this looked different 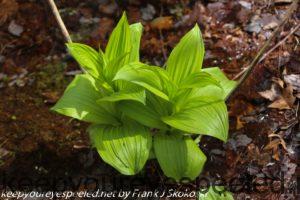 I crushed a leaf between my fingers and no foul smell It wasn’t skunk cabbage!  Thanks to my PictureThis plant identification app I discovered it was a native plant, and poisonous named false hellebore. I had never seen it growing in our woodlands before. I learned  it is said  that some Native American chiefs were selected only if they survived eating this poisonous plant. Interesting I had no intentions of trying it. 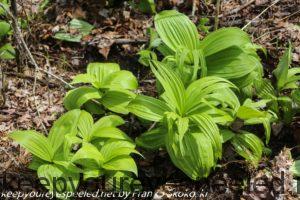 After finding this new plant I hiked to the rutted road to the game lands and finished my seven mile hike. I was disappointed that I saw no bears on the hike but still enjoyed the many birds, plants and the snapping turtle on my hike. Hopefully I get some bear photographs on my next hike in these woods. This is a link to some more photographs from my hike. State Game Lands 119 May 3 2020, 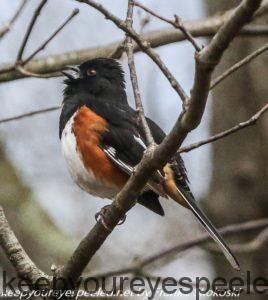 “The sum of the whole is this: walk and be happy, walk and be healthy. “The best of all ways to lengthen our days” is not, as Mr. Thomas Moore has it, “to steal a few hours from night, my love;” but, with leave be it spoken, to walk steadily and with a purpose. The wandering man knows of certain ancients, far gone in years, who have staved off infirmities and dissolution by earnest walking,–hale fellows close upon eighty and ninety, but brisk as boys.”
–   Charles Dickens