Norway Day Four: An Overnight cruise To The North Cape Without The Midnight Sun

Norway Day Four: An Overnight cruise To The North Cape Without The Midnight Sun 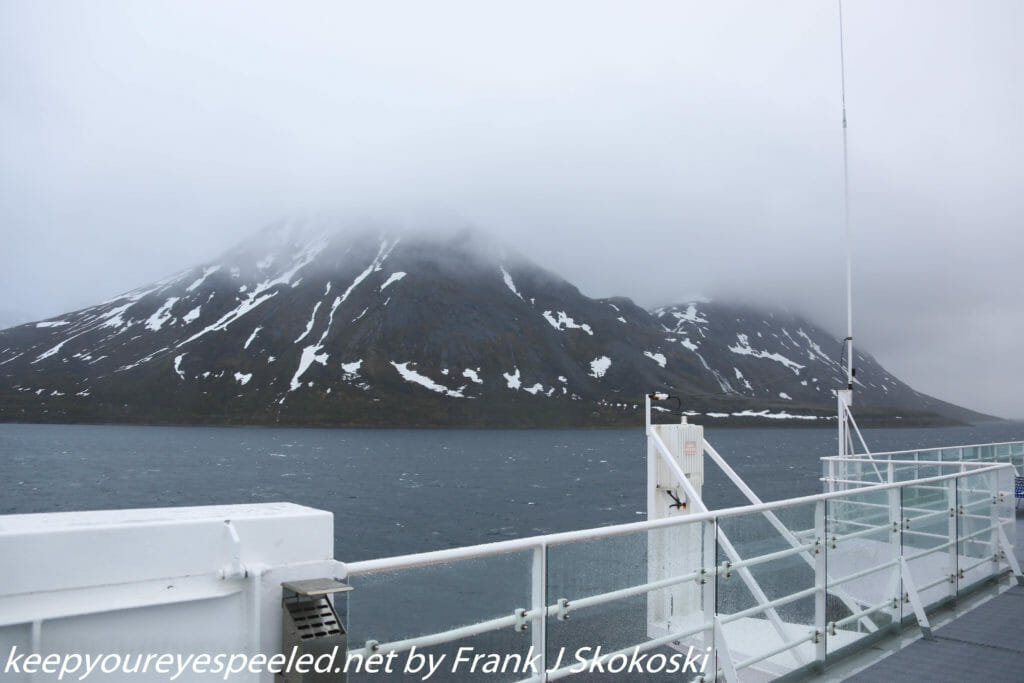 After breakfast Sunday morning  I returned my rental car and took a taxi back  to the hotel. I planned to walk  but it was raining even harder now. When I got back to my hotel I watched the cruise ship  MS Finnmark, arrive in port. It was my  ride to the North Cape, the northernmost point on continental Europe. 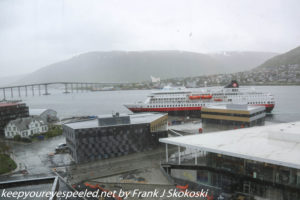 I walked in the rain to the dock and waited in the pouring rain for ten minutes while a host of people  exited  the ship. I  was soon aboard  and assigned a comfortable,and dry  cabin for the 16 hour cruise. 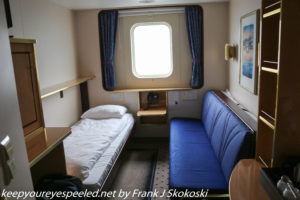 I had almost four hours until we our ship left port.  So  I spent some of the time exploring this large ship and beautiful ship . It  continually, year round  makes a trip from Bergen in southern Norway to Kirknes in far  northern Norway, near it’s border with Russia. It stops in 34 ports, including Tromso  along the way. Passengers and cargo are exchanged at almost every stop. 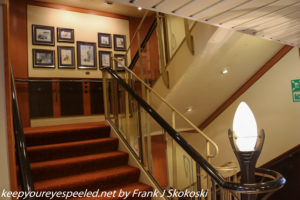 I was surprised at the luxury of the ship. I had thought it would be more like a ferry, just  transporting passengers, similar to  a ship I once took from Stockholm to Helsinki. Not this ship. I found it has a proud tradition of providing  the best comforts to it’s passengers. 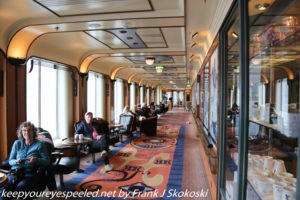 I explored the outside decks of the ships first. 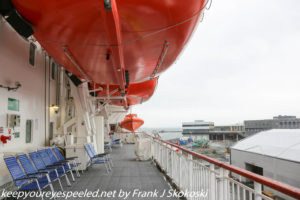 It was cold and raining but that didn’t stop some folks from using the two outdoor saunas and swimming pool . 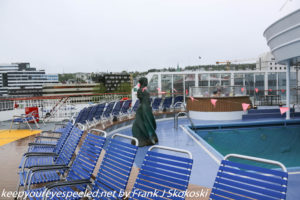 Otherwise the decks were empty but not so the many lounges, cafes and sitting areas throughout the ship. 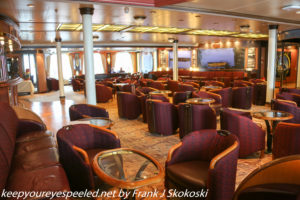 The walls were adorned with artwork , historical memorabilia,  photographs, and delightful sketches made by a famous Norwegian artist. I love ships and love to be at sea. 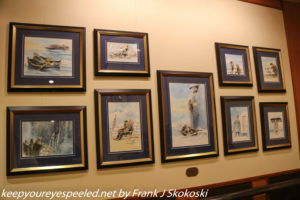 I decided to eat before we left Tromso. Departure was 6:30 p.m. Dinner was served at 6 p.m. and I sat down in the elegant Babette’s Cafe. I ordered the local king crab and was treated to a large portion of this seafood delicacy.  It took longer to eat than expected and we were already out of port by the time I finished. Here is a link to some more photographs from my exploration of the MS Finnmark. Norway Day Four: Tromso to North Cape MS Finnmark June 3 2018. 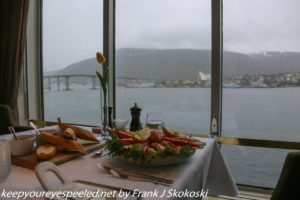 After my filling and delicious meal I  immediately went out on the decks to observe the passing scenery. 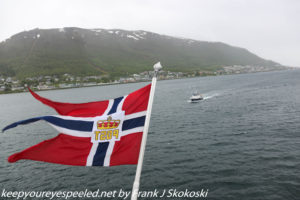 It was cold and rainy, the intensity of the rain varying throughout the voyage. I was disappointed since the fjords, mountains and ocean would have been spectacular in the sunlight. Yet the experience of seeing the fury of the arctic north even in June was certainly worth the trip. 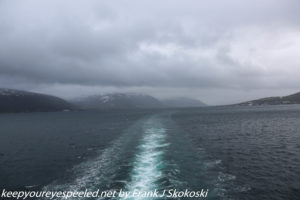 I watched the many mist covered mountains pass as we cruised north. 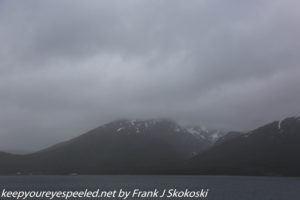 Occasionally we cruised past  a small village, 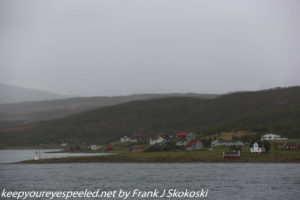 or a fishing boat  out on stormy Nordic June night, cloudy but still light from  the  sun hidden behind the clouds. 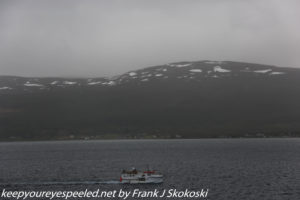 I wondered about these folks, and how they can live in these harsh conditions. When I thought of their lives before my trip I felt the midnight sun would balance out the twenty fours hours of darkness in winter. Now I realized even in June,  when there should be twenty four hours of sunlight ,conditions can be harsh.  In only six weeks the sun will set and it will start getting colder and darker again. A nice place to visit but not for me. Here is a link to some more photographs from my time out on the decks. Norway Day Four: Tromso to North Cape evening on deck June 3 2018. 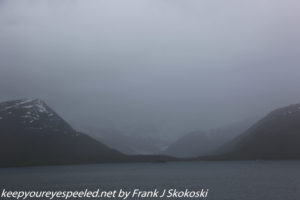 Since it was raining and you only could see a short distance into the cloud shrouded mountains. I hoped to see some birds on my voyage but they were few and hard to photograph in the rainy conditions. 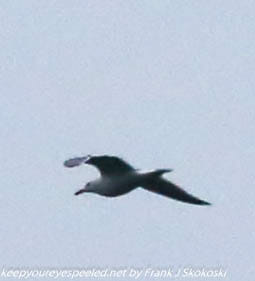 I returned to my room and tried to sleep. I was going to awake at midnight to hopefully see some breaks in the clouds and maybe even the midnight sun. Well I didn’t sleep and when I returned to the deck I found, you guessed it, clouds and a cold rain. 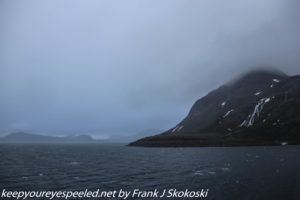 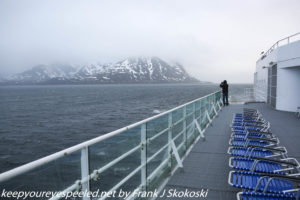 We cruised by a few more small towns, hugging the mountain sides , 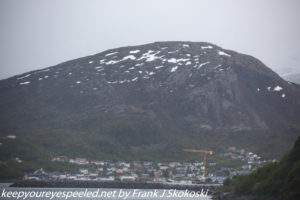 sometimes stopping to exchange cargo or a passenger or two. 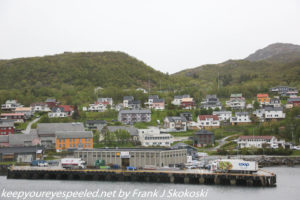 Again I wondered about the folks living on these northern shores. Shortly after midnight it seemed like it almost was going to clear. I was excited. Maybe I will see the midnight sun. 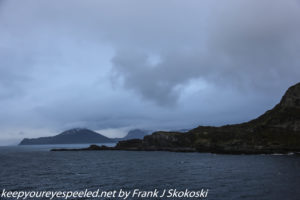 It was only a tease. Soon thicker clouds and fog returned followed by sheets of cold rain. I retreated to my comfortable cabin hoping to also find some much needed sleep. Here is a link to some more photographs from my midnight and  early morning walks on the decks of the Finnmark. Norway Day Four: Tromso to North Cape midnight June 3 2018. 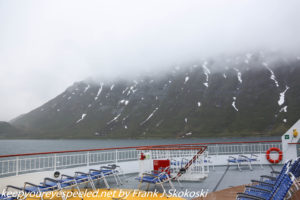 I didn’t sleep well again, and usually do on ships. It is the 24 light that is affecting me on this trip. I was up early and it was again raining. After breakfast I spent the morning working on editing photos. Around 11:30 we entered the sheltered harbor of Honningsvag not far from North Cape. I was soon heading to my next rainy adventure in Norway. 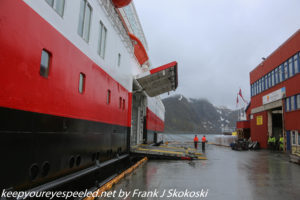 I must go down to the sea again, to the lonely sea and the sky.
And all I ask is a tall ship and a star to steer her by.
–  John Masefield 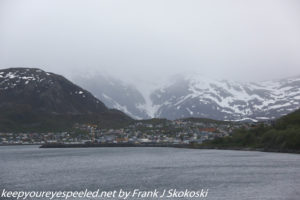