March 4, 2018 / fskokoski@gmail.com / Comments Off on Plenty Of Birds And A Few Signs Of Spring At The PPL Wetlands 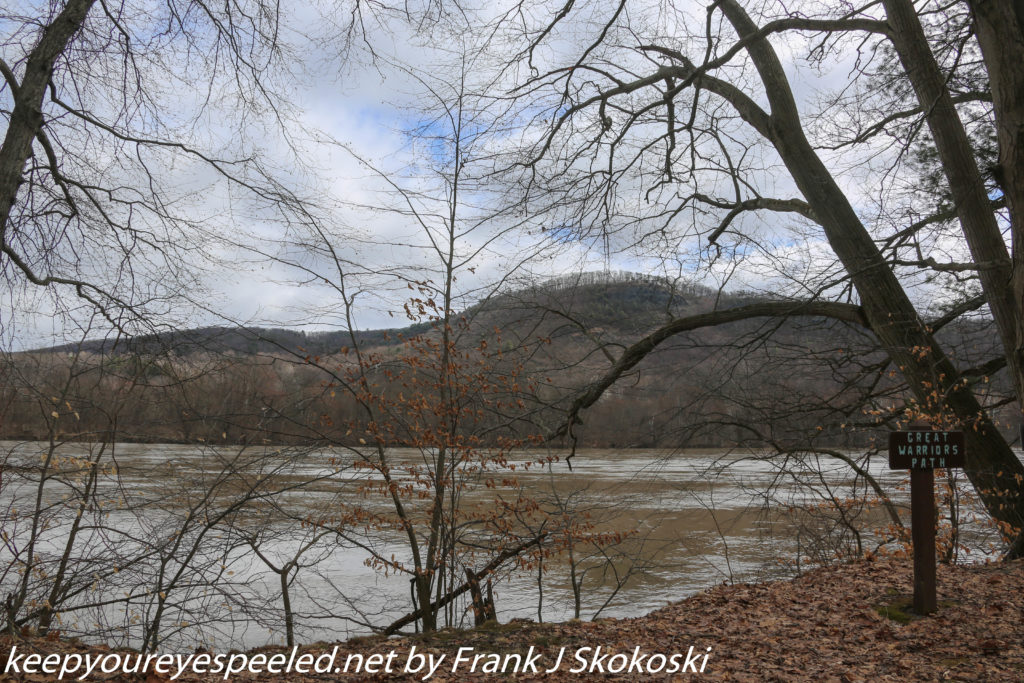 What a difference a few miles  and  feet make,   well,  actually,   twenty miles distance and about 1000 feet of elevation.  This is what my yard in Hazle Township  looked like this morning. It was 26 degrees,windy and with  about 8 inches of snow on the ground. 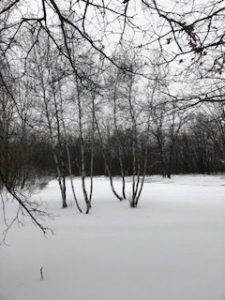 I decided to hike in  the PPl Wetlands near Berwick. It is about twenty miles north of my house with  an elevation of about 600 feet. My house is about 1800 feet. As I neared the wetlands the snow cover was less and less. There was no snow at the wetlands. Not a single snowflake. And I wasn’t complaining. 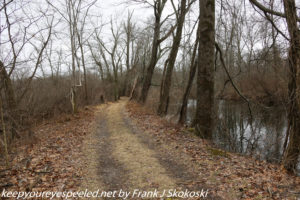 I did find the Susquehanna River swollen with the rain and melting snow from the recent storms. 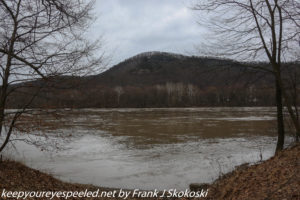 I began my hike  through the wetlands and found all of the ponds and canals to be ice free. A big difference from my last hike. 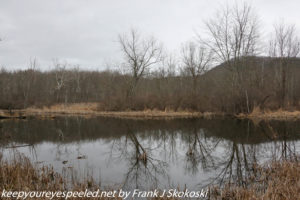 And I found what I was looking for, one of the first signs of spring,  the skunk cabbage! 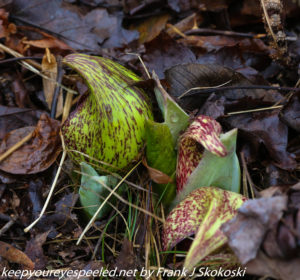 I have loved this unique plant, and have been searching for it every spring, since I first learned about it as a child.

I was also surprised to see some more early signs of Spring. I found a number of pairs of Canada geese on the ponds. They  already had  staked out their nesting territories.  And they were  defending them with a loud honking at  anyone or anything that approached. They well become much quieter and secretive when the eggs are laid. 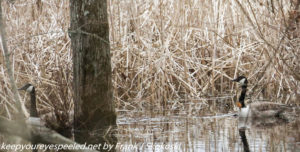 Many parts of the wetlands were flooded. There is usually a path here. 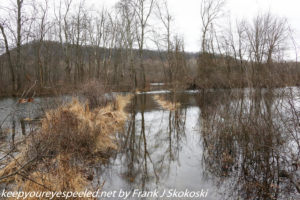 As I continued my   walk  towards the river lands section of the PPl nature preserve, 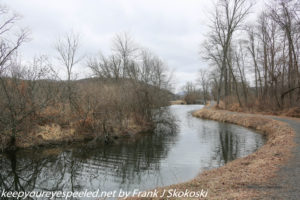 I noticed the song sparrows were now singing louder than in the colder weather. They either were  establishing their territory or trying to attract a mate. 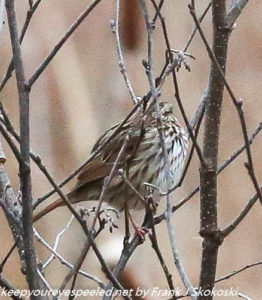 I came to Lake Took-A-While and scared a couple of female common mergansers swimming on it’s waters.

The rest of the flock  were still  swimming on the other side of  the lake.

And there were now quite a few robins in the wetlands but they seemed to be staying up high in the tree tops for some reason. 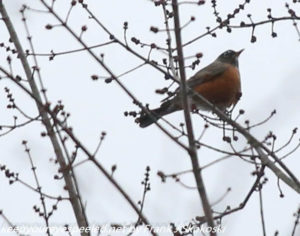 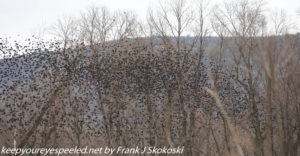 I saw this large crowd flying near the river.  It was one of the last flocks flying away from me.  It  contained hundreds, if not thousands of birds. I tried to catch up with them but they were moving to fast for me. 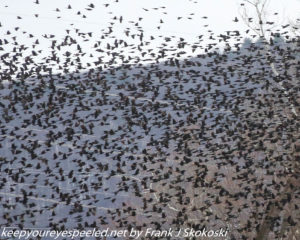 You can use the search  application on my blog to find previous videos I posted of these massive flocks of birds. This flock  looked as large as any I have ever seen. 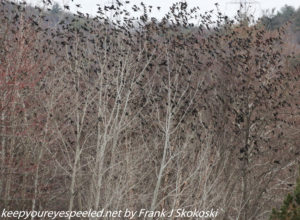 I also saw this red tailed hawk soaring overhead in the overcast sky. 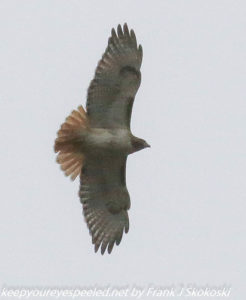 And there were also some of the year long residents out and about, including a lot of black-capped chickadees, 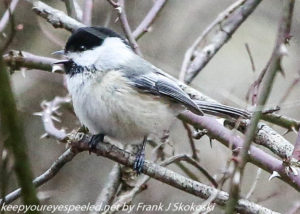 and this tufted titmouse. I wasn’t sure what it was eating, but it sure was enjoying it. 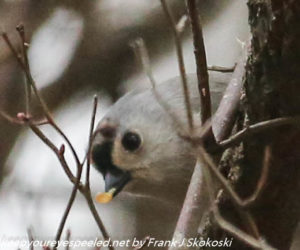 I also saw a few woodpeckers including this red bellied one. 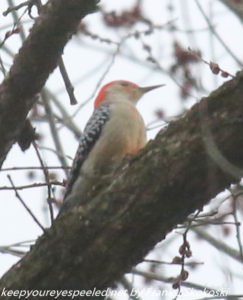 Once again time required me to end my explorations of the wetlands and I had to return to my car. I saw a few more signs of spring on my return hike, including patches of green onion grass. 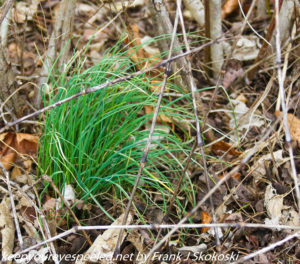 And a turkey vulture. 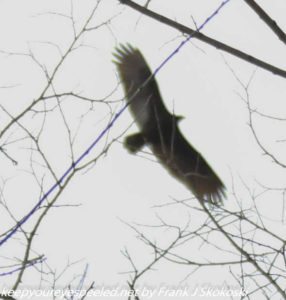 Although there was no snow, it was still cloudy, windy and cold at the wetlands. March came in as a lion. But the days of winter are ending, and I saw a lot of signs of the coming Spring, and warm weather at the wetlands. It gets better every day now. Here is a link to some more photographs from my hike. PPL Wetlands Hike. March 3 2018. 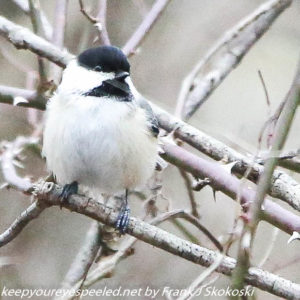 There is something of the marvelous in all things of nature.  Aristotle 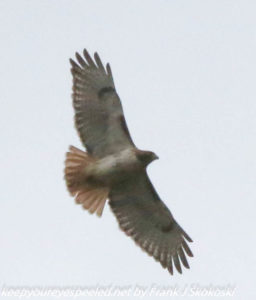