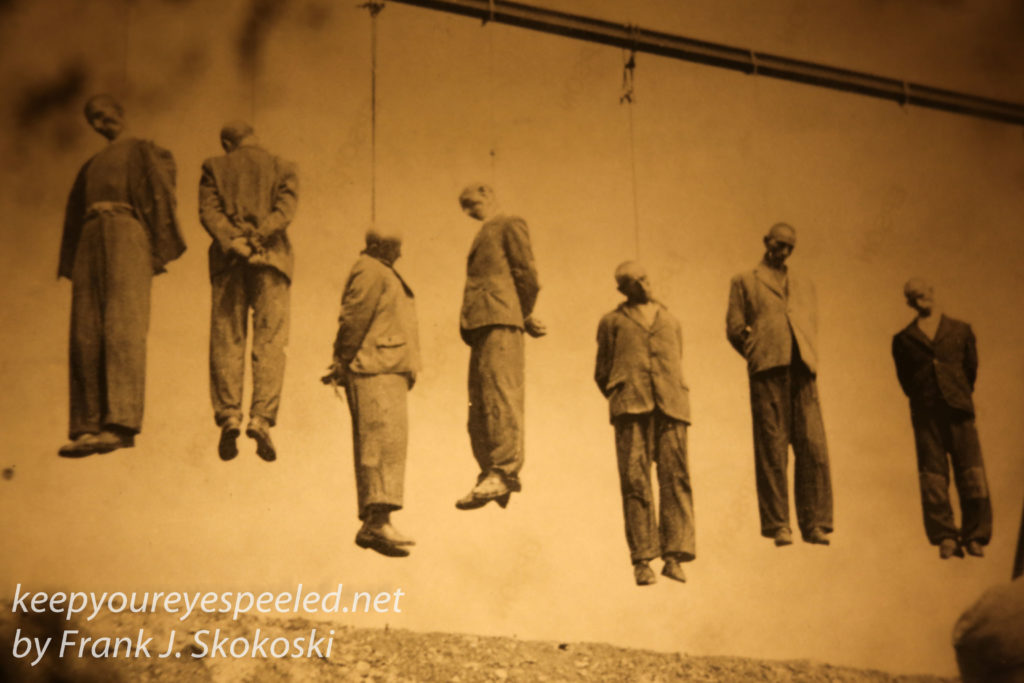 I visited this district  one week earlier when I first arrived in Krakow and here is a link to a blog post from that visit. http://wp.me/p5GeDV-jPl..  This time I learned so much more from our guide Ada. Like my previous visit,  it was  raining when we left the van, but that wasn’t stopping us. 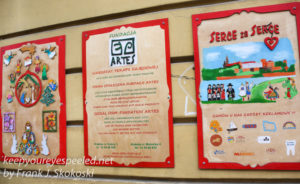 We first visited  a Jewish community center where a woman my sister and niece befriended on their flight to Krakow worked. . It was a pleasant, and appropriate visit since the Kazimierz district is once again regaining it’s Jewish culture which it had for over 500 years  prior to the horrors that occurred in the Nazi occupation of World War II. 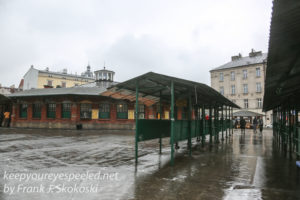 We left the community center and walked the mainly residential neighborhoods and made our way to Plac Nowy (New square). which was once the center of the Jewish community, 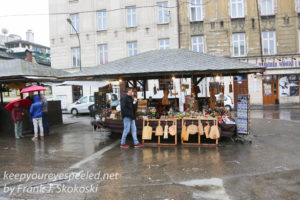 In the middle of the square is a  round building that was one  a  ritual slaughterhouse for poultry  for the community. 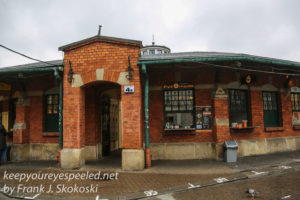 It still has some butcher shops inside but is more famous for the small shops that serve zapiekank, a pizza like sandwich. A fellow who just purchased one was kind enough to allow me to take a photograph.

We continued our walk passing  an old Synagogue and  some Jewish cemeteries and learning how this community thrived before Word War II and how it was made famous in  the movie Schindler’s List. 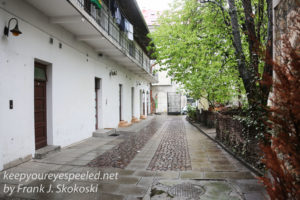 We visited the house where we were told a famous scene in the movie occurred. It was the scene where the woman was hiding her daughter from the NAZI’s. 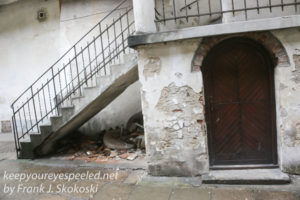 We made our way to the Remuh Synagogue built in 1557 and still active. Unfortunately it was closed for the Passover.  We made our was to  Old Synagogue, built in the mid 1500’s and which now houses a museum. 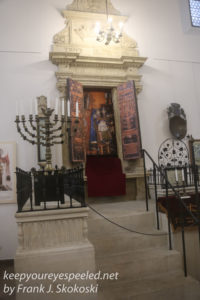 We visited the museum and learned so much more about Jewish life in Poland over the centuries. 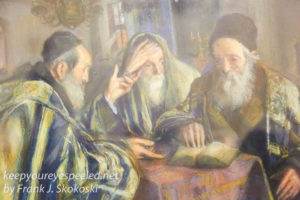 We then walked through  the surrounding neighborhood, where many of the well preserved old building now house restaurants specializing in Jewish food. I hope to visit again on a sunny day and enjoy  a meal in one of the outdoor tables. 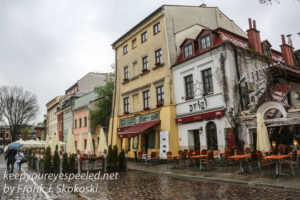 We  stopped at  a memorial to the many residents who lost their lives during the occupation. We would learn more about them at our next stop.  We again boarded our van for the short ride to Schindler’s factory. Here is a link to some more photographs from our visit to the Kazimierz. https://www.keepyoureyespeeled.net/poland-photographs-april-2017/nggallery/poland-april-2017/Poland-Day-Eleven-Krakow-Kazimierz-Jewish-section-April-18-2017 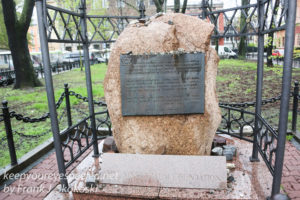 We crossed the Vistula into the Podgorze  district of Krakow , a large portion of which was turned into a Jewish ghetto by the NAZI’s during the occupation of World War II. We drove past  Plac Bohaterow Getta square and the  memorial of large bronze chairs commemorating the many Jewish residents  who died in the ghetto. 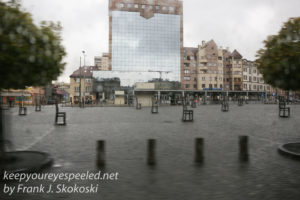 We soon were at the factory made famous by both the man, and the movie about him, Oskar Schindler, a German industrialist. He was famous for his heroic efforts to save his Jewish workers at his enamelware factory from sure death in the Nazi concentration camps by bribing Nazi officials. 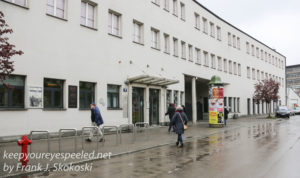 There is so much to say here about this man and his story but let me use two of his quotes to try and  sum it up. 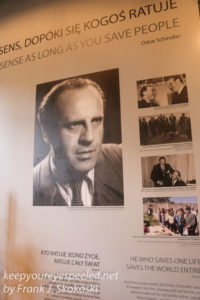 ” The persecution of  Jews  in occupied Poland meant that we could see horror emerging gradually in many ways. In 1939, they were forced to wear Jewish stars, and people were herded and shut up into ghettos. Then, in the years ’41 and ’42 there was plenty of public evidence of pure sadism. With people behaving like pigs, I felt the Jews were being destroyed. I had to help them. There was no choice”  Oskar  Schindler   Interview at Am Hauptbahn No. 4 in Frankfurt Am Main, West Germany (1964) 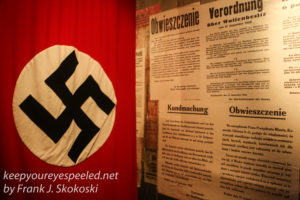 “I hated the brutality, the sadism, and the insanity  of  Nazism . I just couldn’t stand by and see people destroyed. I did what I could, what I had to do, what my conscience told me I must do. That’s all there is to it. Really, nothing more.” Oskar Schindler. 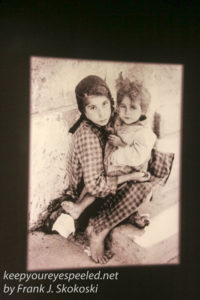 The museum is housed in the actual factory where enamelware was manufactured  using  Jewish forced labor. 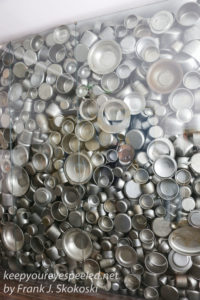 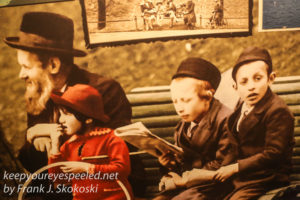 The museum was very informative with many  historical depictions of what occurred as well as illustrations of everyday life before and after the occupation. 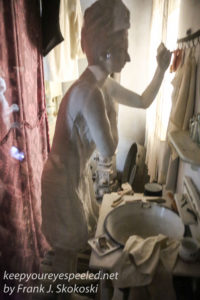 As we made our way through the museum the horrors of these events  became so real. 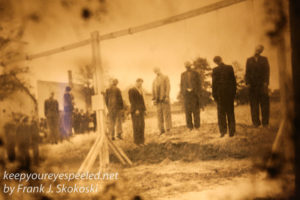 We learned how the Jewish  residents of the  Kazimierz district we just visited were moved to a  ghetto across the river, a walled prison were they were used as forced labor. 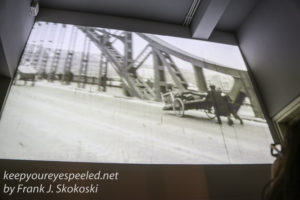 And, later many were transferred to the concentration camps and their deaths. Here is  a link to some more photographs I took in the museum. https://www.keepyoureyespeeled.net/poland-photographs-april-2017/nggallery/poland-april-2017/Poland-Day-Eleven-Krakow-Schindler-Factory- 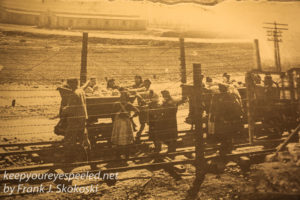 The museum had  some original  furnishings in the office used by Schindler and some information on his life. He was honored by the 1200 Jewish workers after his death and was buried with honor in Israel. 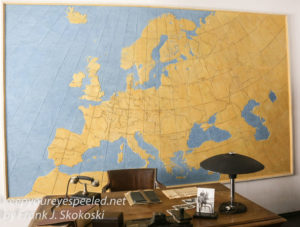 I learned there were many residents of Krakow, and Poland who, in the spite  of the horrors of the Nazis, stood up and saved many Jewish people who would have perished in the death camps they created.We would be visiting one of them the next day. 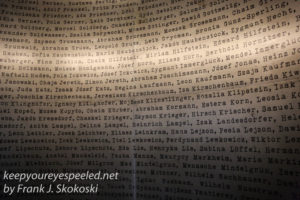 How  anyone with any soul or  empathy for their  fellow human beings could allow such hatred to exist is a question we must still ask ourselves  today.  As I  type I am watching  the news of yet another terrorist attack in Manchester .  This  hate for our fellow humans on this small planet we share  has to start somewhere it and must be nipped in it’s bud, wherever it starts to grow. 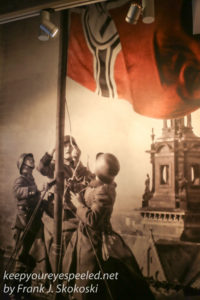 I don’t have time  to reflect  much here, on my blog, since it is such a difficult problem. I think  it can best be said in the words and lyrics  from this song by Peter, Paul and Mary    “…. when will they ever learn”   Here is a link to some more photographs from our visit to Schindler’s factory. https://www.keepyoureyespeeled.net/poland-photographs-april-2017/nggallery/poland-april-2017/Factory-part-two- 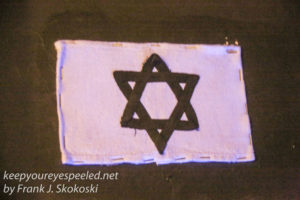