Poland Day Four: Off To The Mountains; A Bus, Taxi and Van Ride to Tatra National Park

May 1, 2017 / fskokoski@gmail.com / Comments Off on Poland Day Four: Off To The Mountains; A Bus, Taxi and Van Ride to Tatra National Park

Poland Day Four: Off To The Mountains; A Bus, Taxi and Van Ride to Tatra National Park 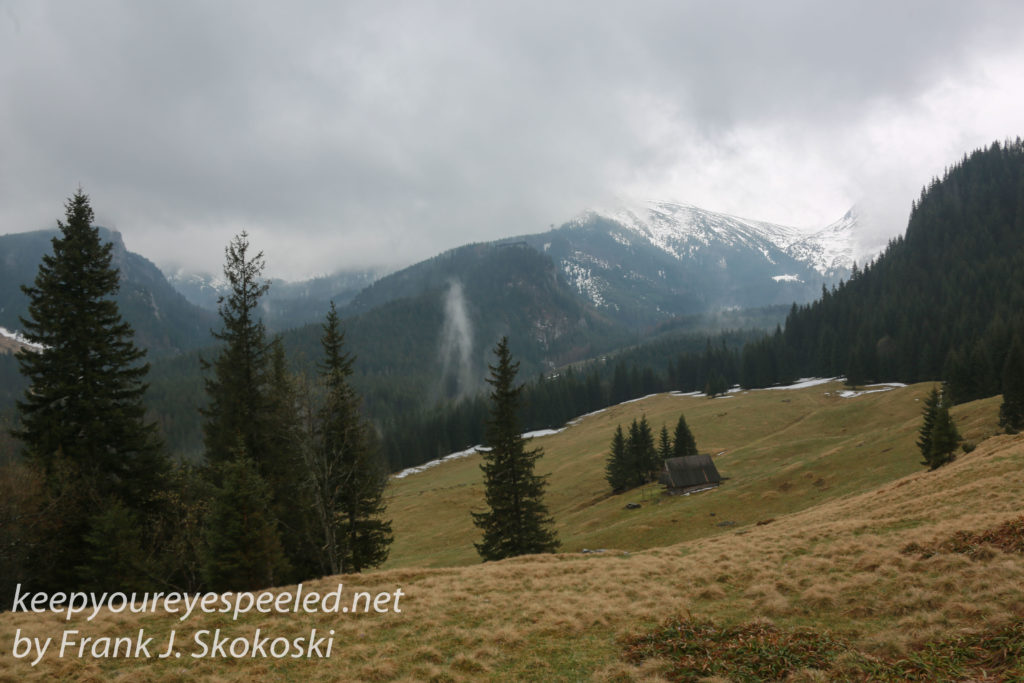 It was raining when I awoke on Tuesday morning but I wanted to take one more walk through the streets of Krakow before I headed to the mountains.  I put on my rain gear and headed out into the cool and wet morning. . It was early and there was no one on the cobblestone streets of Old Town Krakow. 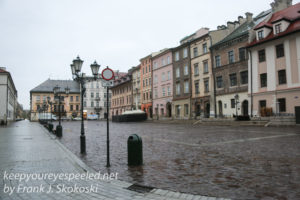 I liked having the old city all to myself and wanted to have one last look at the Main square and the impressive towers of St. Mary’s Basilica. It looked so different, old and  desolate in the rain,  but still impressive,  without the crowds of people. 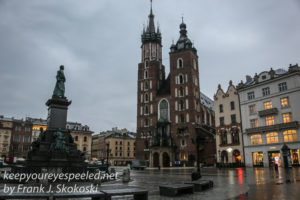 I walked down deserted Grodzka Street passing Pod Aniolami, the restaurant where I had dinner the previous night. 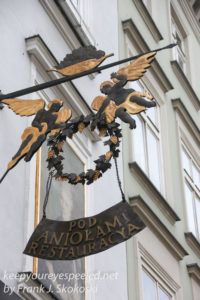 As I continued on  Grodska Street, there wasnow  an occasional person walking in the early morning rain. The street is closed to motor vehicle traffic, as is much of the old city. I passed  the closed shops, restaurants and businesses and past the historic St. Peter and Paul’s and St. Andrew’s churches, imagining the countless people who walked the same streets over the centuries since St Andrew’s first towered over them. 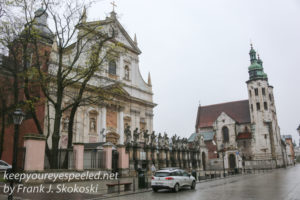 I  came to Wawel Castle and the memorial of the Kaytn Forrest Massacre, stopping to again reflect on the horrible events that occurred in 1940. I found the memorial strewn with flowers. 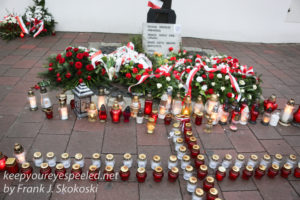 This time I turned to the left, away from the Castle and into the narrow streets of Kazimierz, the former Jewish District of Krakow. 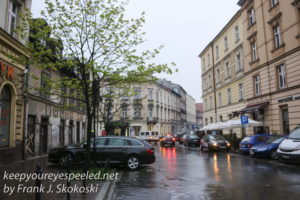 I soon came upon a synagogue, a   sign of the Jewish presence in this area, which had been continuous for almost 500 years until the NAZI occupation during World War II. 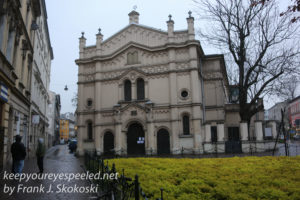 Unfortunately, that presence ended with the removal of the Jewish population to the ghetto in Podgorze and ultimately, for many ,  to  the concentration camps and gas chambers. . Recently, however the area has been recovering some of it’s former atmosphere and is again regaining it’s Jewish population. It  has become a popular tourists area celebrating it’s traditional Jewish culture and remembering the horrors of the German NAZI  occupation in WWII with monuments and memorials. 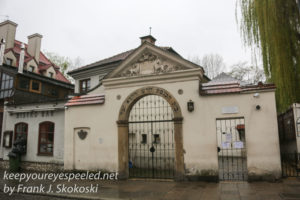 There are now many  Jewish restaurants and shops.as well as museums. 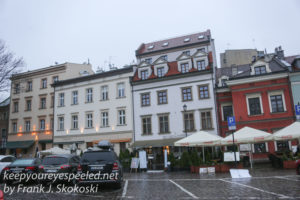 I came upon this  memorial to those who lost their lives as a result of the hatred of the NAZI’s. I remained for  some reflection at this memorial before I had to head back to my hotel Here is a link to some more photographs from my walk through Kazimierz https://keepyoureyespeeled.net/poland-photographs-april-2017/nggallery/poland-april-2017/Poland-Day-Four-Krakow-Jewish-Ghetto-Tuesday-April-11-2017- 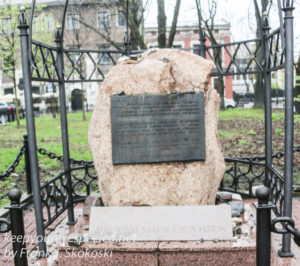 On the way I explored the old neighborhood and  some of the old  apartment buildings. 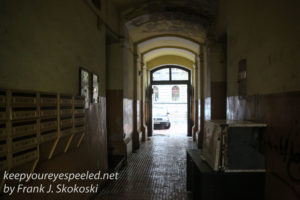 I entered a few that left their doors ajar peeking inside and wondering about the current residents and the many folks who lived in these old structures over the years since they were built.. 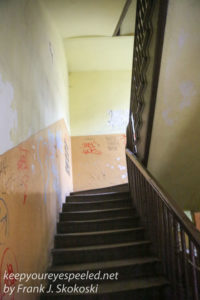 I continued my walk, and the rain  picked up as I made it back to the planty and my hotel. Here is a link to some more photographs from my morning walk. https://keepyoureyespeeled.net/poland-photographs-april-2017/nggallery/poland-april-2017/Poland-Day-Four-Krakow-morning-walk-Tuesday-April-11-2017 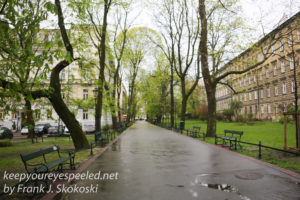 After another delicious breakfast of traditional Polish foods I said farewell to the staff and took a taxi to the bus station.  I arrived five minutes before the bus was scheduled to leave and discovered there were no bathrooms on the bus. I asked the driver if I had time to run to the bathroom and he said no. It was going to be an interesting trip. 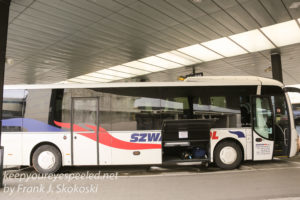 The bus had only a few passengers as we made are way through the morning rush hour traffic of Krakow. 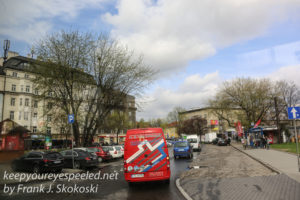 The sun broke through the clouds as we drove into the suburbs, which, like I found all over the world, contained large shopping centers, automobile dealerships and restaurants. 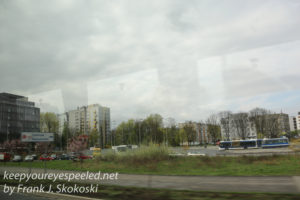 We were soon, for a short while,  on major highway, but this didn’t last long. We were headed  south into the mountains and soon entered more rural areas and the highway became two lanes and more congested with trucks and rural traffic. 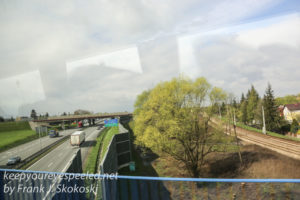 The rain returned as we made our way through the   pretty countryside. 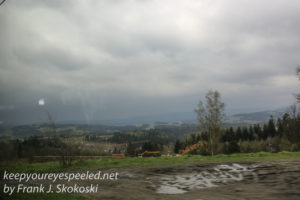 I was surprised by the amount of construction in the many small towns we passed. And the roadsides had plenty of billboards advertising the many goods and services common to all of the modern world. Like it or not, we are becoming a global community. 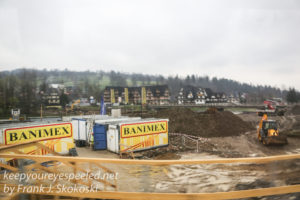 I enjoyed the approximately 2 1/2 hour bus ride. I liked watching the countryside of a new country, however, the lack of a bathroom was the only drawback. 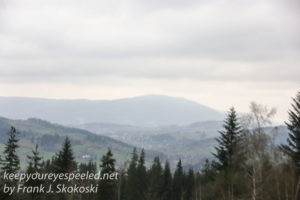 We were soon within the picturesque town of Zakopane, with its famous, and beautiful wooden homes. This is a ski resort town in the Winter and a base for hiking in the Tatra Mountains in the Summer. and like all tourists towns it had it’s share of shops, restaurants and travel agencies. 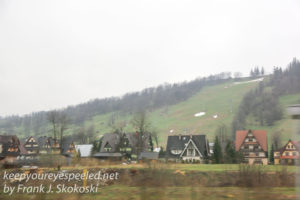 I was dropped off at the small bus station, and, of course immediately found a bathroom. I had my two zloty ready since almost all public bathrooms charge two zloty, about 50 cents in US dollars,   for admission. After my much needed visit to the bathroom, I hired a taxi, and failing to communicate, he spoke not a word of English, I called my hotel and they advised him where to drop me off. 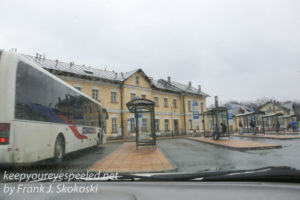 I was staying at the Hotel Gorski Kalatowki located within the boundary of the Tatra National Park.  To get there I first had to travel about three miles to the tiny town of Kuznice. There are no private roads to this town and you must take a bus or a taxi.  Located within the town is a cable car that ascends the Tatra Mountains to the summit of Kasprowy. It is used by skiers and hikers throughout the year. The cab driver, not speaking a word of English drove me there to have a look. He seemed quite proud of it. 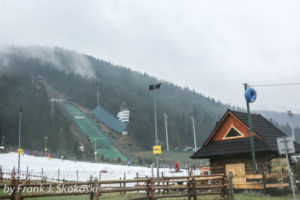 The town of Kuznice  appears to have been deserted, and the taxi driver dropped off me and  my luggage and left me, alone, at this road at the edge of town.  It was raining lightly and I was sure hoping someone from the hotel would show up. 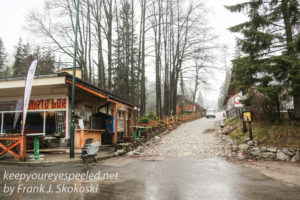 They did. I was relieved when a van came down the cobblestone road and stopped to assist me with my luggage. The fellow  driving the van spoke no English and did not appear to be too happy. He directed me to the rear of the van where I sat on a bench as we made it up a steep, wet cobblestone road. I soon learned why he wasn’t happy. 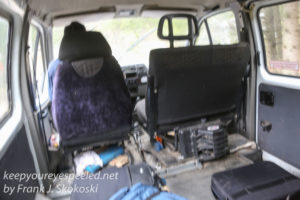 The road soon turned to snow and I am sure it wasn’t easy driving in the snow, up a steep incline on a cobblestone road. The ride was most interesting.  Here is a link to some more photographs from my bus ride from Krakow to the Hotel Gorski Kakatowki. . https://keepyoureyespeeled.net/poland-photographs-april-2017/nggallery/poland-april-2017/Poland-Day-Four-Krakow-morning-walk-Tuesday-April-11-2017 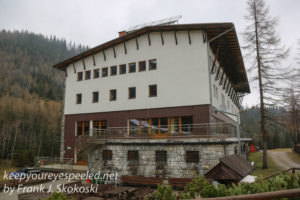 We live in a world that is full of beauty, charm and adventure. There is no end to the adventures we can have if only we seek them with our eyes open. – Jawaharlal Nehru