Roaming In The Mine Reclamation Lands Near My Home

April 18, 2021 / fskokoski@gmail.com / Comments Off on Roaming In The Mine Reclamation Lands Near My Home

Roaming In The Mine Reclamation Lands Near My Home 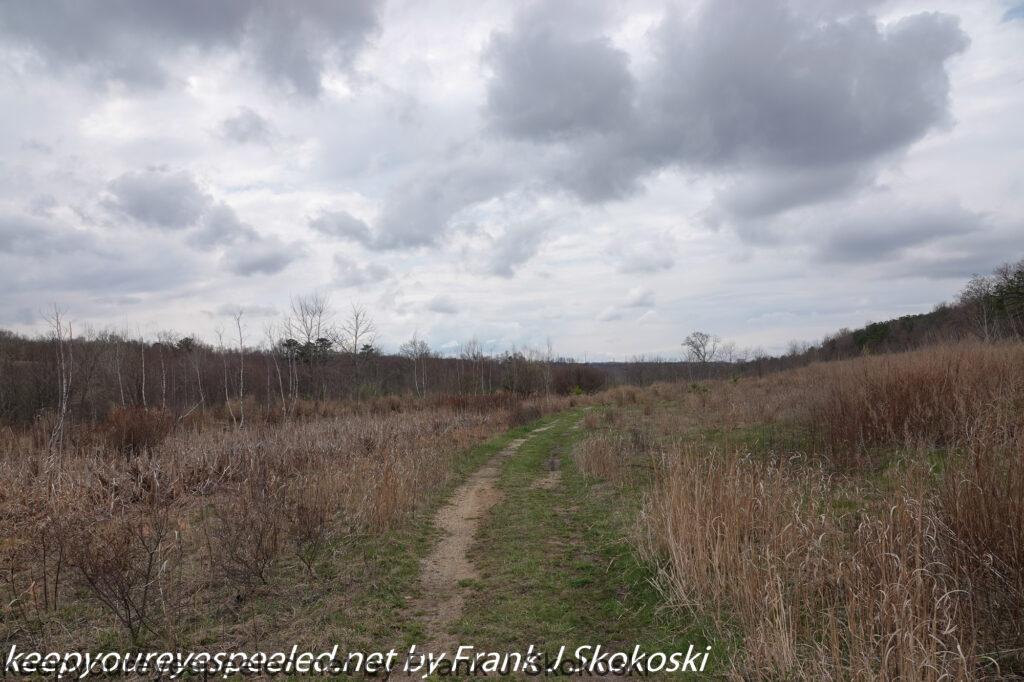 As some of you who follow my blog may know,  there  is a large mine reclamation area of land near my home in the Green Ridge section of  Hazle Township in Luzerne County .  For almost a century before I was born there was extensive deep coal mining on these lands.  Then, beginning around 1900 this area was strip mined. 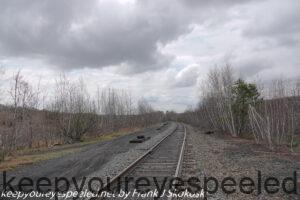 Years passed, and by the time I was a boy, the deep  strip mines were covered in a second growth of trees and other vegetation.  As a child, my friends  and I  explored the strip mines and looked for fossils and crystals on  large culm and slag banks. There were also vast areas of coal silt, the remains of the fine dust and dirt washed from the coal after it was processed in the large Cranberry coal breaker a few miles south of my home. (the breaker burned in a fire in 1951).  Much to our mother’s chagrin, we played in this coal silt and came home as black as coal miners many a summer day. 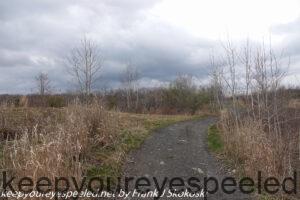 We also learned about the beauty of nature out here, catching tadpoles, frogs and salamanders in the ponds that formed in the strip mines. We saw deer, snakes, hawks and many other wild critters  in the birch, pine and scrub oak trees that grew in the mine scarred land. We picked mushrooms and huckleberries that grew under these  trees . We played, hiked and camped  in these strip mines. And it was fun!!!  Good memories I have from those years. 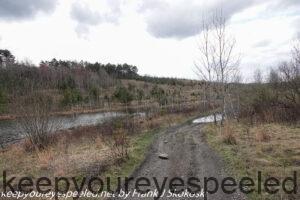 Well, in 2006 these strip mined areas, my childhood playground, were reclaimed for a supposed  “recreational and residential improvement project called the Cranberry Creek Gateway Park.  The strip mines were filled, the slag and culm banks leveled and the coal silt removed and covered. The project was never completed and the reclamation lands remain. 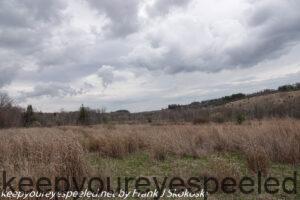 This week we had a lot of cloudy weather here in Northeastern Pennsylvania and I decided to stay close to home and took a  couple of hikes in the reclamation area. At  first, the reclamation lands were  barren, but new growth has  occurred and some  wildlife has returned. The old Cranberry Creek once flowed through the strip mined areas. It carried some raw sewage from wildcat sewers and was affectionally referred to as the “s..t” creek by the  old time locals. We played  on its smelly banks many days in grade school.  The creek still flows at times, without the raw sewage and some wetlands were created in the reclamation areas around  the creek.  On one of my walks I came across this pair of  American toads mating in a puddle of water in the wetlands. 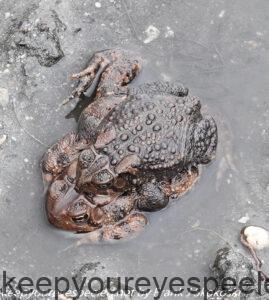 They were  obviously pre-occupied and didn’t even try to flee as I approached. 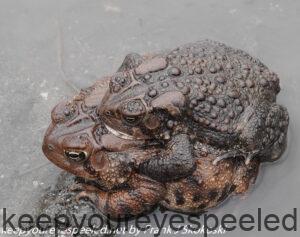 A few days later I found this strand of toad eggs in the waters of the puddle, assuring another generation of toads in  the area. 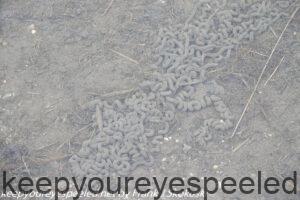 Most years many red-winged black birds nest in the wetlands. I heard a few on my walks by not as many as other years. Not sure why. I did see a few robins, 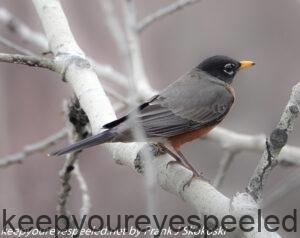 and this chipping sparrow on my walks. I also was fortunate to see one of our state birds, a ruffled grouse, but it flew off under the birch trees before I could get a photos. There used to be dozens of these birds in the strip mined areas when I was a kid. 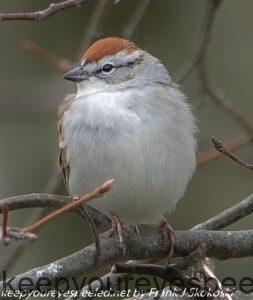 Walking past the old Cranberry Creek I came to what was once a vast area  of  coal silt, what we called the “black sands”.  Most of the coal dust or silt was removed but  the grounds still contain  a lot of the black silt. As you can see birch and pine trees are now growing in this area. 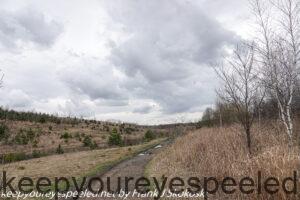 I walked through this area of the reclamation lands and to the still active railroad right of way.  I spent many hours walking these tracks, alone and with friends,  over the years. 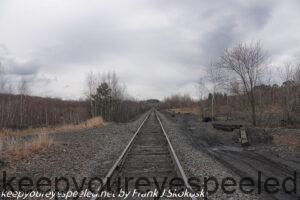 We would put pennies on the tracks and were amazed how the railroad cars would flatten them. Heading east the tracks would take you to Crystal Ridge and eventually the city of Hazleton. We didn’t venture that way to often. 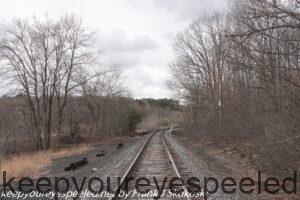 We usually followed the tracks the other way and would walk to Valmont and eventually back to West Hazleton near the high school. I took that walk many Saturday and Sunday afternoons in high school.

Last week I walked to the old  rail road bridge that crossed the Cranberry Creek. 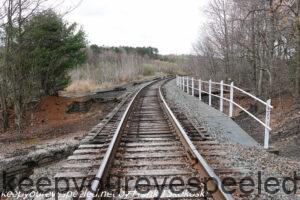 Looking at the old stream bed you can tell that a lot of water once flowed in this creek. It was one of the  main creeks where the city of Hazleton’s sewage was discharged in the 19th century.  Much of the creeks  flow ended when it’s waters were diverted by strip mines into the old mine tunnels and, eventually,  into the Jeddo Tunnel. There was hardly any water flowing under this bridge when I young. The  concrete structures seen in the creek bed had to have been built in the late 19th century. 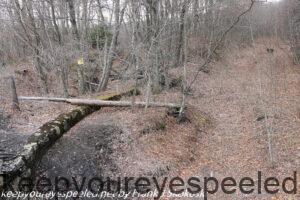 There were many other mine structures in the area, all leveled and buried in the reclamation that took place. I miss the strip mines. They are gone and at least for now nature is also making a comeback. On my walks I saw signs of Spring in including many pussy willow trees beginning to sprout their first leaves. 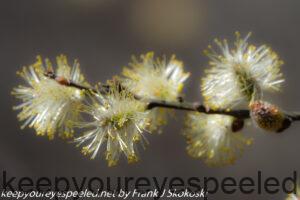 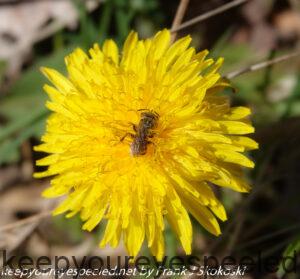 skunk cabbages were unfurling their leaves 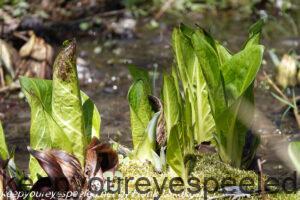 and the fuzzy leaves of the  common mullein  were growing on the ground. 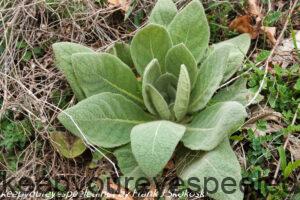 On one of the ponds  created in the reclamation area, 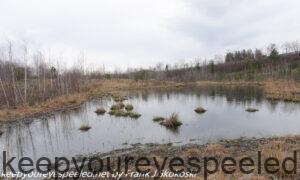 I saw this male mallard duck swimming alone. I am sure its mate is sitting on a nearby nest. 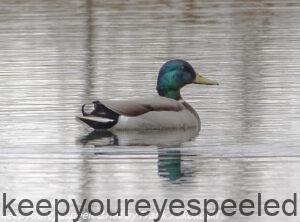 There was also a northern flicker and 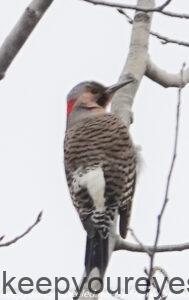 hawk perched in the trees on one of my walk. I am not a hawk expert but think it may be a Cooper’s hawk. 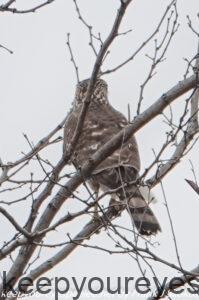 Although I’d rather the old strip mines, nature is  restoring the mine scarred land in the reclamation lands. I still enjoy walking, remembering the good times I had, and enjoying the beauty of nature that is slowly. reappearing . However, it may not last long.  Rumor has it that the area may be developed soon. But not with  residential  and recreational developments that were promised, rather more commercial warehouse. I hope the rumors are wrong.  I would much rather this area be made into a nature park with some memorials commemorating the generations of coal miners that lived, worked and died  on these lands.  This is a link to a gallery on my website with more photos from my hike in the reclamation lands near my house. Reclamation lands Hazle Township April 12 to 16 2021. 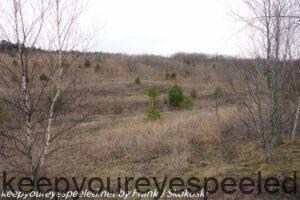 Of all the paths you take in life, make sure a few of them are dirt.    -John Muir