November 12, 2020 / fskokoski@gmail.com / Comments Off on Satellite Dishes And Covered Bridges: An Autumn Ride Through Columbia County 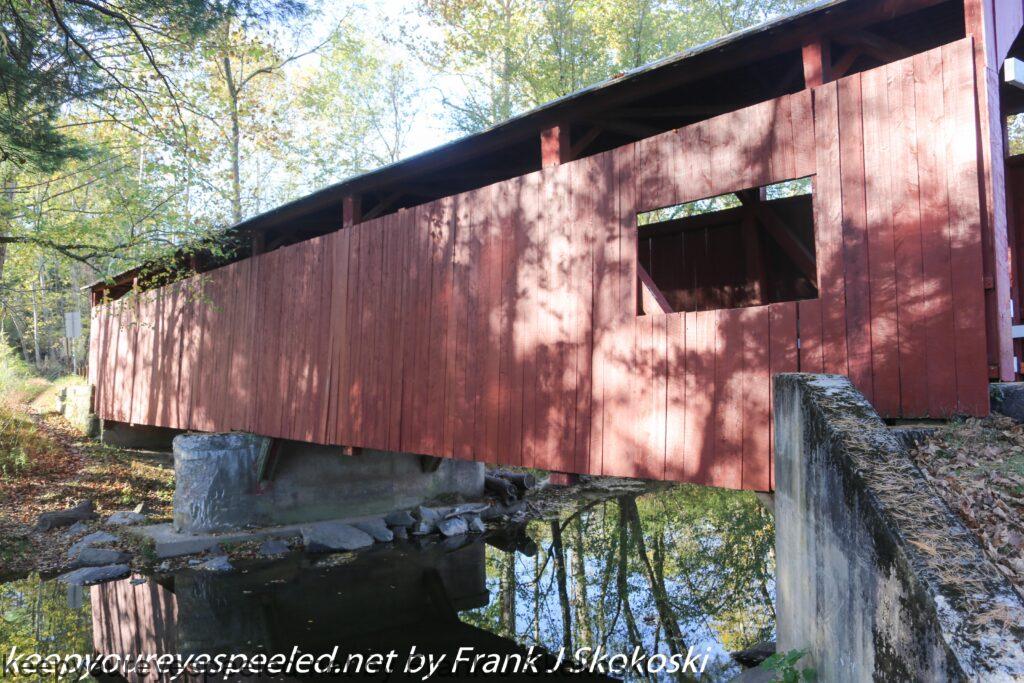 It has  been a busy couple of weeks at my law office.  I have been enjoying the Fall weather but I haven’t had a chance to work much on my  blog.  It’s raining today so I have some time  jot a few comments, and share some photos from an autumn ride I took  in Columbia County a few weeks ago. It was a sunny and pleasant Saturday afternoon.  The Fall foliage was still near its peak. A perfect day for a hike and an Autumn ride.  Originally my girlfriend and I were  going to hike on the Roaring Creek Reservoir trail in Columbia County. but, on our  way decided to follow some backroads. 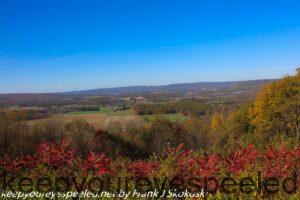 We drove over some hills, isolated valleys  and through some small towns.  A small farm along one of the  roads was selling apples and we stopped to buy some  at a help yourself stand . The farmer who lived there came home and we had a nice chat with him.  We were enjoying the small farms and rural countryside  when we  came upon this covered bridge. 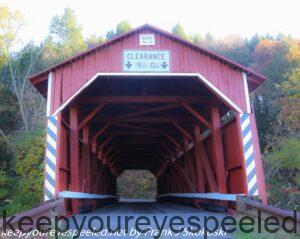 I had heard their were covered bridges in Columbia County but I had never came across one before. This was the Davis Bridge, 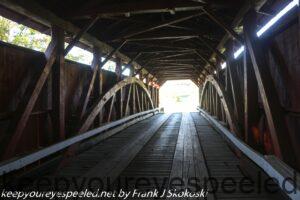 which was built in 1875 over the north branch of the Roaring Creek in Columbia County. After investigating the  150 year old structure we continued to drive along the rural roads.

We soon came upon another covered bridge. This was the Esther Furnace. It also spanned the north branch of Roaring Creek and was built in 1881. 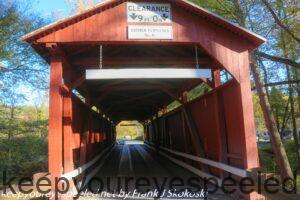 Leaving the creek we drove through farmland where we saw some old barns, 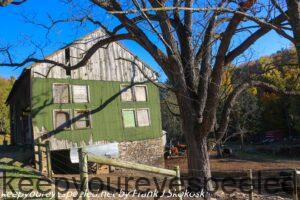 corn fields with pumpkins  and, 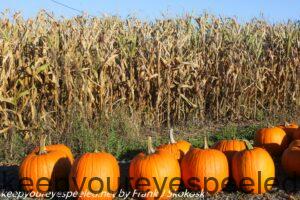 of course, some cows. 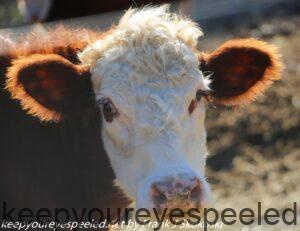 There were also some deer along the roads. 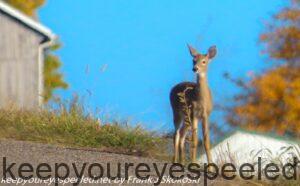 As we continued our drive we were surprised to come upon this scene, this array of large satellite dishes, in the middle of no where. 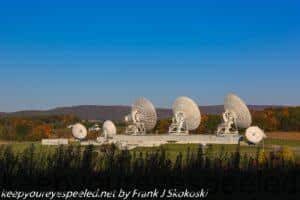 Curious we approached to investigate. There was no one at the guard station but  I learned later these large satellite dishes were know as he Roaring Creek Earth Station, 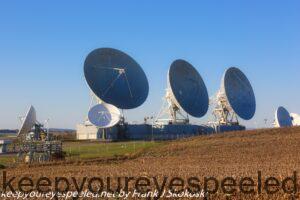 Built by Comsat it opened on June 1 1984 and is part of a global communications satellite system. 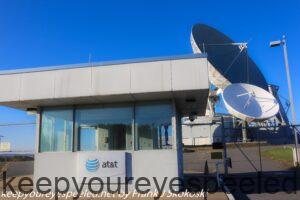 We left the satellites and drove by some more farms and old  farms houses.  Many had seasonal decorations. 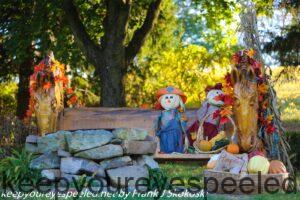 Others  had animals including some beautiful horses. 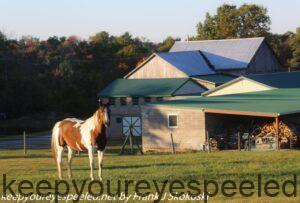 We stopped to observe them as they grazed in the late afternoon sunshine. 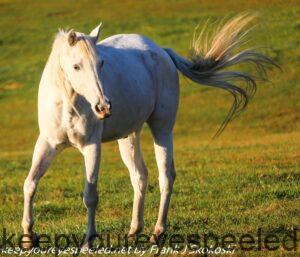 Some were friendly and approached our car to say hello. 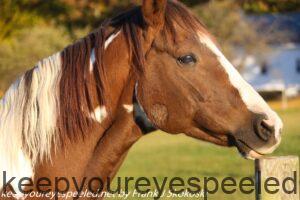 The mid October sun was getting low in the south western sky as we drove past fields of  brown corn stalks , sunflower and 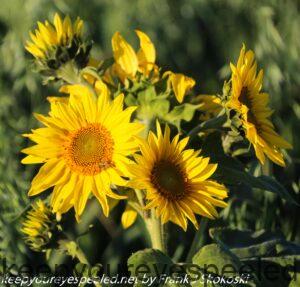 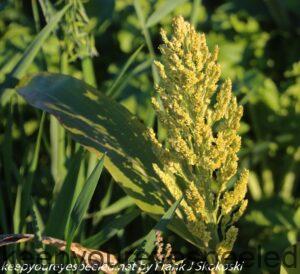 Harvesting equipment in some of the fields was another reminder that the growing season was over and winter was approaching. 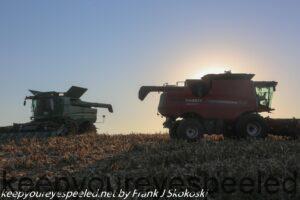 We continued to explore the many side roads and the shadows fell in the valleys and on the east and north side of the hills. We came upon one more covered bridge as  the sun began to set, the Johnson Bridge. 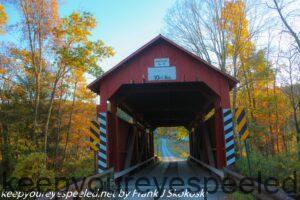 Built in 1882 this bridge spanned the Mugser Creek. 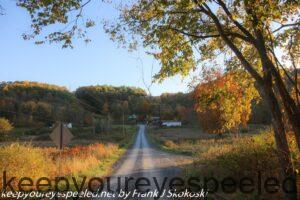 It was time to begin our ride home. We were somewhere in western Columbia County as we made our way back as the sun set in the west. 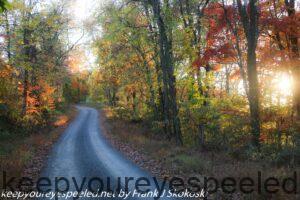 We drove past some more cattle and 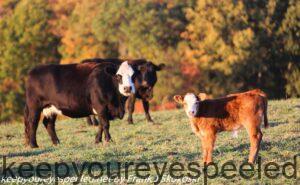 some deer as darkness approached. We reflected on our pleasant drive exploring Columbia County on our 45 minute drive back home. We didn’t get out hike in but seeing the old bridges, the farm animals and peaceful rural scenery more than made up for it. Here is a link to a gallery with some more photographs from our  autumn ride  in Columbia County. Columbia County drive October 17 2020 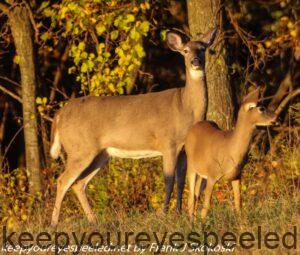 “Country roads, take me home, to the place I belong.. ”  John Denver