September Hikes With My Macro Lens. More Of Nature Up Close

September 3, 2017 / fskokoski@gmail.com / Comments Off on September Hikes With My Macro Lens. More Of Nature Up Close

September Hikes With My Macro Lens. More Of Nature Up Close 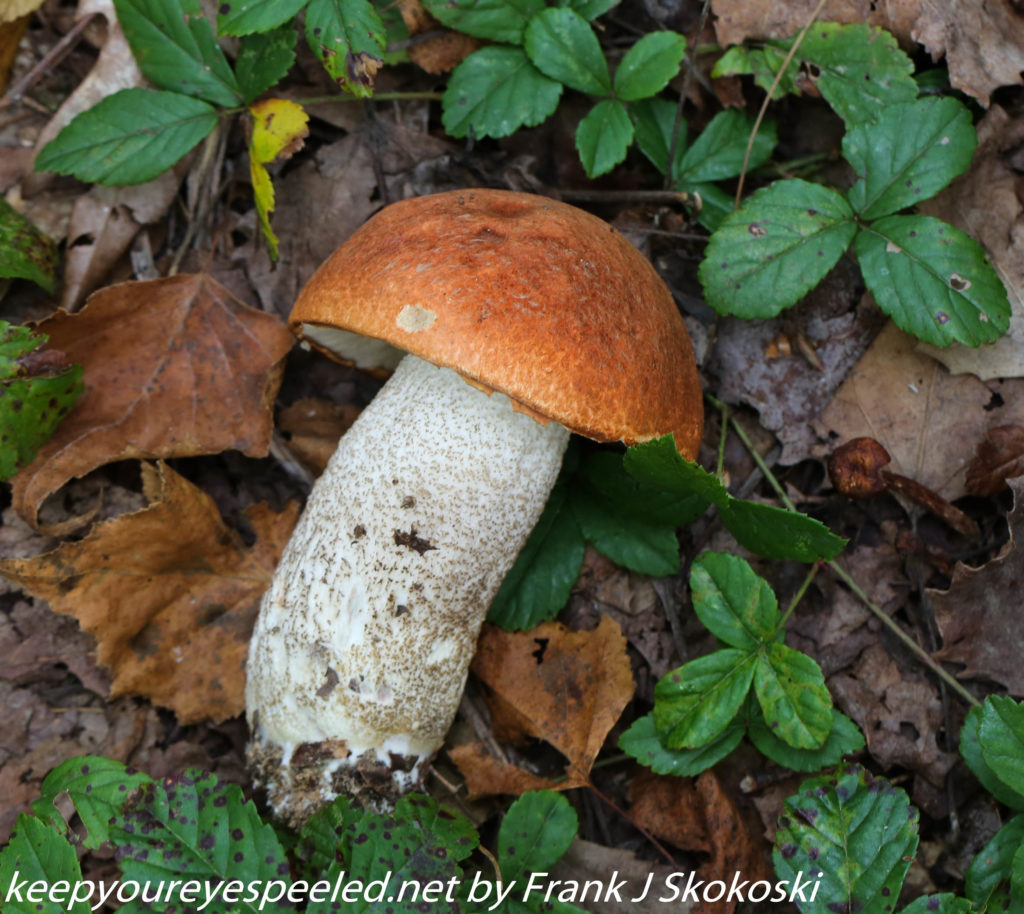 It’s hard to believe it’s September already. It seems we were just anxiously awaiting the return of the song birds and the first flowers of Spring.  Seasons change so quickly it seems. It is almost fall now and here in Northeastern Pennsylvania late summer brings mushrooms. 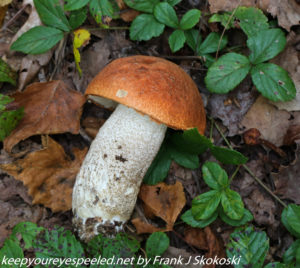 I was out looking for red tops. or aspen scaber bolete,  (a nice specimen shown above)  these past few days. Like most mushroom foragers, I don’t  reveal my favorite spots, so rather than give hints to where I was,  I took took my camera with a macro lens to share some more of nature close up. 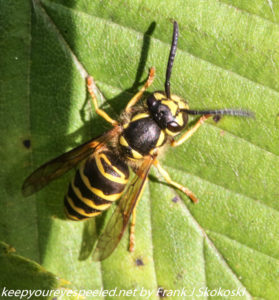 The first thing I noticed, due to the cool weather we’ve been having, it was in the low 40’s a couple of mornings,  was the reduced activity of the insects. 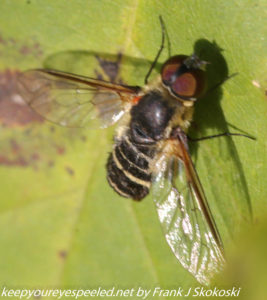 I found many wasps, bees and yellow jackets almost motionless on the leaves and flowers on my walk. And I noticed many ladybug beetles also almost in a dormant state in the early morning cold. 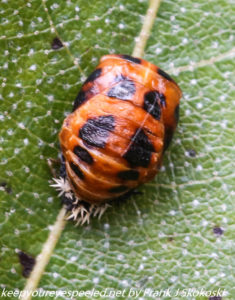 But  many, including yellow jackets  are still active as the day warms up, especially when you step on their nest, as I did and got stung on my shin. Ouch! 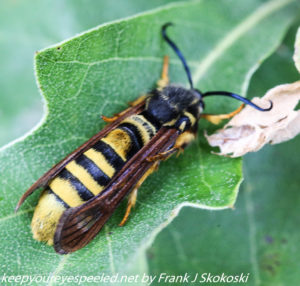 My search for red tops mushrooms brought me to areas of new forest growth with younger, pine, aspen and birch trees. And, what my dad called  ‘mushroom bushes” also know as sweet fern. Here is a close up of a sweet fern leaf already changing colors as the summer ends. . 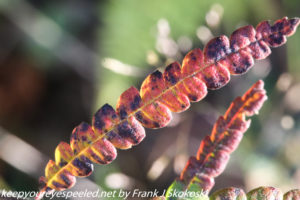 It has been dry and I was disappointed to find only a few mushrooms growing, mainly pigskin puffballs, or what my dad called, “shoe polish”. This one was too old to cut in half and explain the reason for that name, but, stay tuned, I will demonstrate in a future posts. 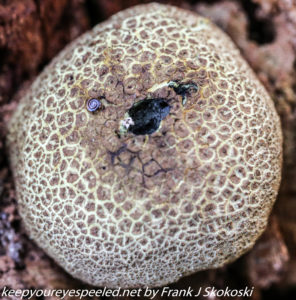 I also found some more unusual objects on my walks, including this oak gall, created from hormones injected by a wasp when it lays it’s eggs on a oak leaf. Pretty fascinating. 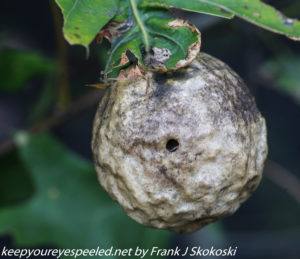 And not sure if I should get into this, but it is part of nature, I found, what I think is bear do do on the ground. Not positive but if any one knows please comment. 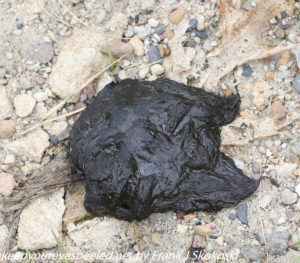 I do know this is deer do do and 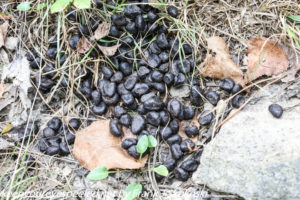 and this white substance on this leaf was droppings left by an unknown bird. 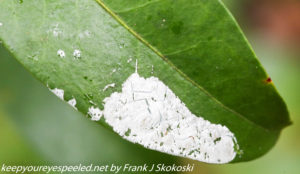 Well onto something more appealing, some left over blueberries, 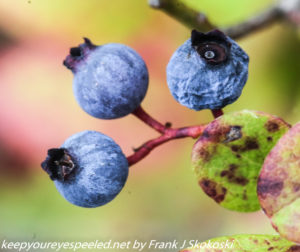 and some chokeberries. I just learned these berries, which we were taught were poisonous,  were one of the staple foods of Shoshone Native American tribe. 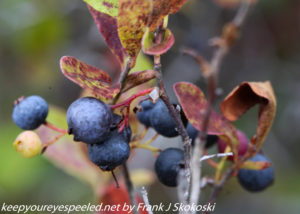 And the oaks also had plenty of acorns this year. 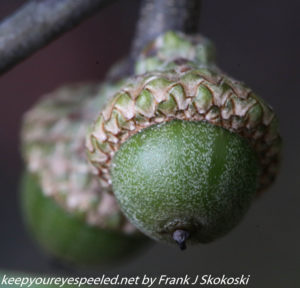 As I wrote in my post from my hike last week, there were still some flower in bloom or about to bloom. 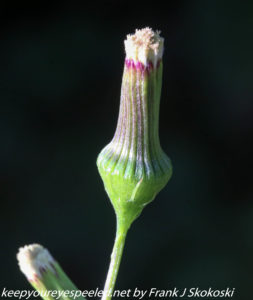 I didn’t find a lot of mushroom but it is always nice to roam the woods of Northeastern Pennsylvania with my eyes peeled, you will always uncover some of the beauty of nature.  It is raining as I type, hopefully there will be more mushroom pictures in my next post. Here is a link to some more photographs from my hikes. Macro photographs. 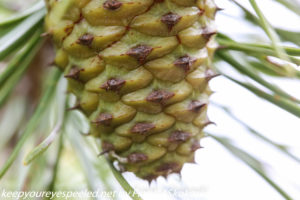 “Look deep into nature, and then you will understand everything better.” –Albert Einstein 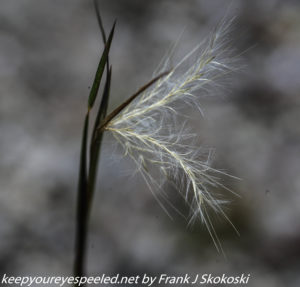