Snow And Ice Return To The PPL Wetlands

January 17, 2019 / fskokoski@gmail.com / Comments Off on Snow And Ice Return To The PPL Wetlands

Snow And Ice Return To The PPL Wetlands 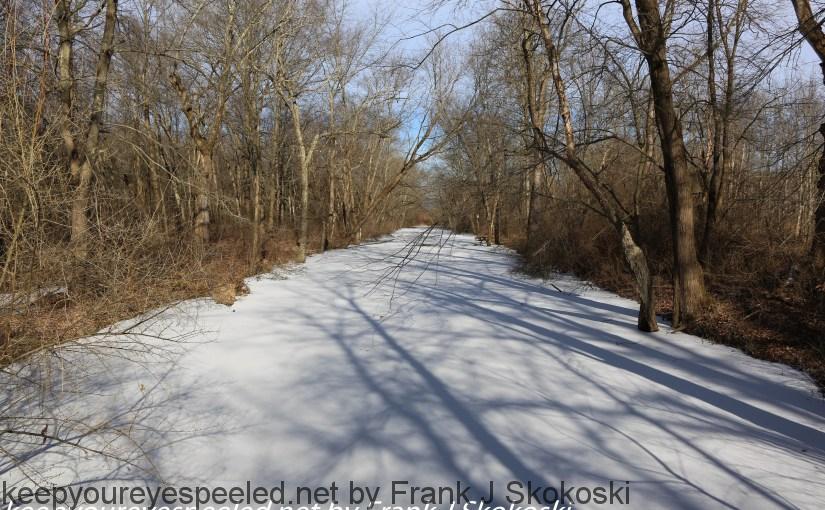 I returned to the PPL Wetlands in Salem Township on Sunday. In my last blog post from the wetlands I commented how unusual it was to have open, ice-free waters on the lakes and ponds in January. Well that changed during the week. Lake Took-A-While was now covered in snow and ice.

It was not a real cold week. Temperatures were actually still above average during the week. But here in Northeastern Pennsylvania average temperatures in January are a high in the low 30’s and lows in the upper teens. So, even with temperatures slightly above normal it was cold enough to freeze the lakes and ponds at the wetlands. And a few passing snow showers covered the ice making for some pretty wintry scenery.

There were no ducks or geese on the frozen lakes and ponds but a few flocks of Canada geese circled overhead.

It seemed like they were frustrated that the lake had frozen. They eventually flew to the open waters of the nearby Susquehanna River. Colder weather is in the forecast and they may finally have to fly further south in the next few weeks.

There was a small patch of open water on the lake. I  spotted a great blue heron huddled on the shore. Once the lake completely freezes over it, too, will have to fly south to find ice-free waters.

I walked past the lake and into the woodlands near the river. Here  I found flocks of Juncos,  sparrows,

I next walked to the still swollen and ice-free waters of the Susquehanna River. I heard the Canada geese honking on its waters in the distance.

I returned to the lake and walked into the wetlands section of the nature preserve. I was surprised to see one of my favorite birds, a mocking-bird.

I also saw a few nuthatches and

I walked along the mostly ice-covered canals of the wetlands.

I did not see any mammals. No deer, rabbit, squirrel, chipmunk, beaver or muskrat. I usually see all of these critters during warmer months. I did see this bird, I believe a march or Carolina wren.

Temperatures were in the low 30’s during  my hike. This is average for January in these parts. And cold enough to completely change the scenery in the wetlands. It looks like they will change even more this weekend. We are expecting a major snow storm with accumulations up to a foot. I don’t like it but I am sure I will be out hiking in it.  Too much to see, even in the Winter, in the woodlands of Northeastern Pennsylvania. Here is a link to some more photographs from my hike. PPL Wetlands January 13 2019.

“If you are a boat and your lake is frozen, what can you do? You will wait for the spring! We are lucky that we are humans, we don’t have to wait for the spring; we can break the ice if necessary, we can use fire to open our way! Nothing can stop the mind if the mind decides to move to his target!”
― Mehmet Murat ildan