June 23, 2019 / fskokoski@gmail.com / Comments Off on Some Good Memories Hiking In The Coal Reclamation Lands, Strip Mines And Mountains Near Hazle Brook, Foster Township 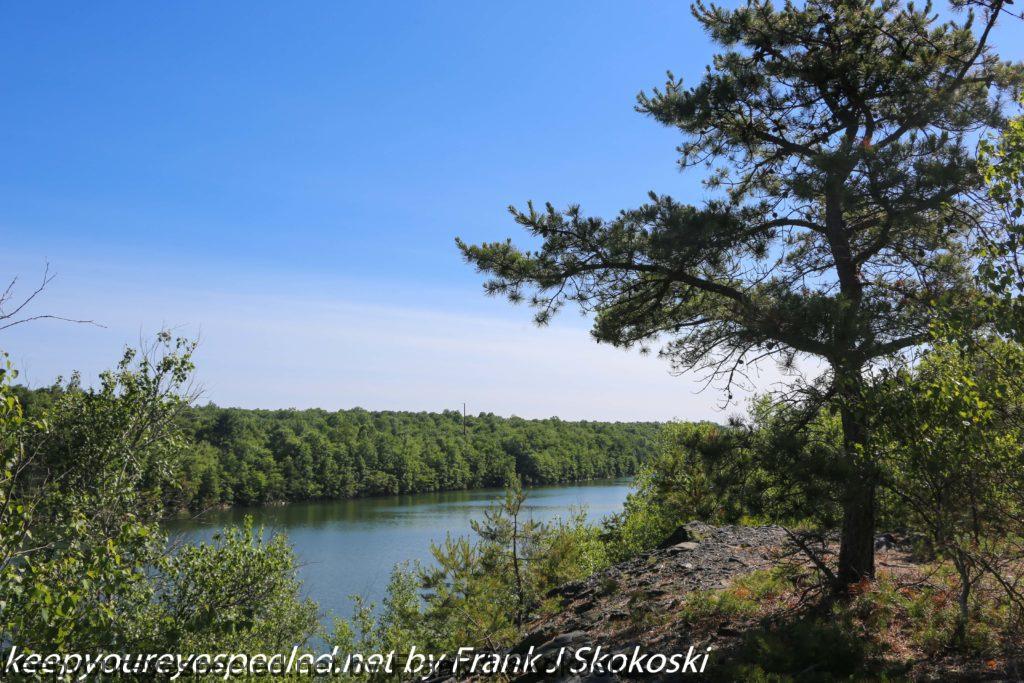 The first weekend of Summer arrived here in Northeastern Pennsylvania with some cool, dry Canadian air, clear skies and brilliant sunshine. Perfect hiking weather. I wanted to take advantage of the sunshine. I planned to hike the railroad tracks near the patch town of Hazle Brook in Foster Township. 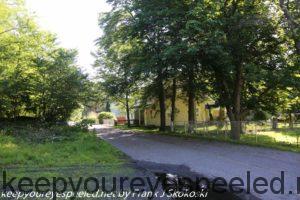 When I arrived in Hazle Brook I recalled the coal reclamation project that I visited last January. Some of the large anthracite coal strip mines were filled in, leveled and planted with grass. The reclaimed areas were covered in ice on my last visit .  I decided to see what it would look like in warmer weather. 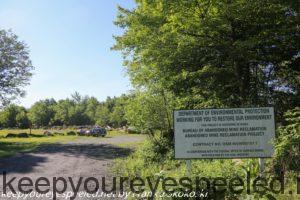 I parked my jeep and began my walk through the large, flat track of grass. The skies were deep blue and cloudless and the waning gibbous moon could barely be seen in the western sky. 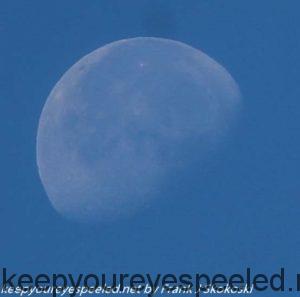 As they were  in the Winter, the reclaimed lands were saturated with water. I had hoped to see some water birds on the few ponds in the area but there were none. 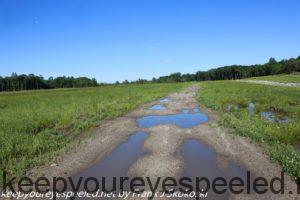 Just a couple of noisy red-winged blackbirds defending their territory. 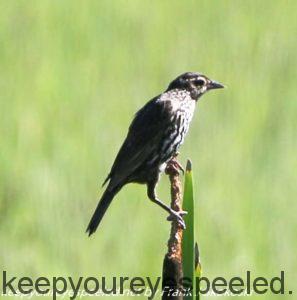 There were now new waterways draining this low-lying area. I saw some cattail growing in some of the ponds.This is a good sign. It looks like this will be a nice little area for birds and wildlife in a few years. 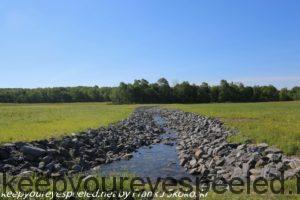 From the look of these tracks, I think a very large bear is living out here now. Note the six toes. Any comments as to why? 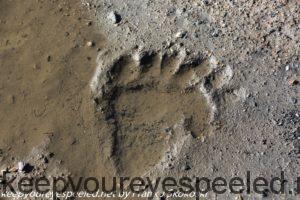 The reclamation area  ended and I walked into  some very old strip mined areas. 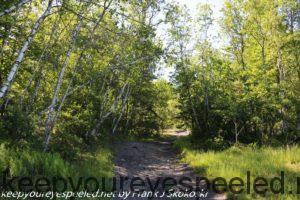 The old overburden from the strip mines has been overgrown with pines, birch oaks and other trees. And in June with new growth of our state flower the mountain laurel. 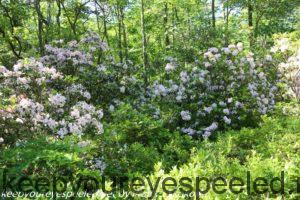 I am very familiar with these type of woodlands. My home in the Green Ridge section was adjacent to an old deep mining and strip mining area just as these woods near Hazle Brook.  I walked those woodland every summer for decades. The strip mines were reclaimed near my home. It enjoyed my walk in this area. 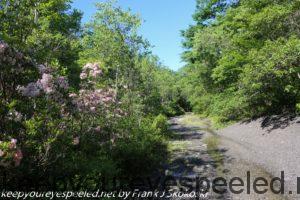 I followed the old roads through the strip mines. They were surrounded by mountain laurel. It is a very good year for these flowers. 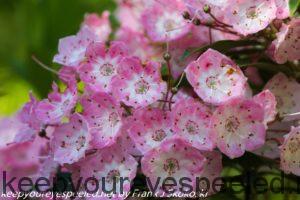 Overhead, a familiar turkey soared in the deep blue skies. Another reminder  of my younger days. We saw them on almost every hike we took. 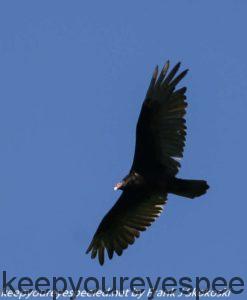 The trail was flooded in spots but I was able to follow it to a large strip mine that is now filled with water,. Again, standing atop the strip mine took me back to the strip mine in  my home in Hazle Township. So many summer day were spent playing in the old strip mines. 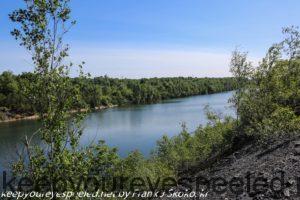 However, I saw something I haven’t seen before in the daytime. As I stood looking at the blue waters of the strip mine a night hawk flew out of a nearby pine tree.  At first I thought it was a killdeer but knew it was something different when I looked at the photograph I took. I learned at home it was a night-hawk. Night-hawk are nocturnal and are  related to my favorite bird, the whippoorwill. I was lucky to see one in the day. 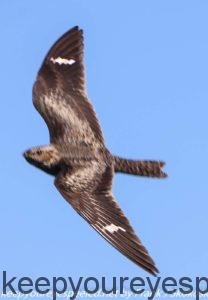 After seeing  the night hawk I spent some time reflecting on the strip mine. I often wonder when the  first strip mining began, who the men were that worked on it and when it flooded. This was a large pit and must have been active for years.  I walked around the strip mine an came to an electric pole line that is being replaced. I followed the right of way along the strip mine for a short distance. 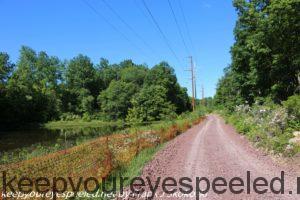 Here I saw some crows, mourning doves and, of course, the always present catbirds. 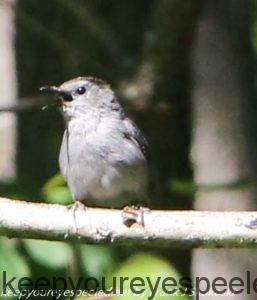 I turned back and decided to take another  route back and followed  the electric pole line. It was a steep climb up the Stockton or Council Ridge mountain. 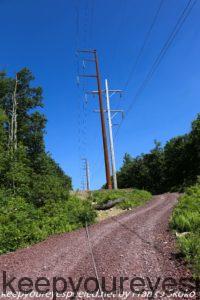 Once I reached the top of the mountains the views were spectacular. That is the Broad Mountain in the distance. 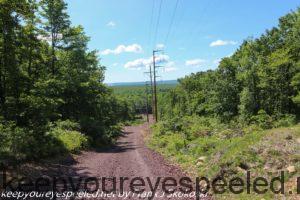 Up on the ridge, the terrain was different. Scrub oaks, pine and chestnut oak were now the dominant trees. Fluttering in the scrub oaks were a number of birds including this female  common yellowthroat. 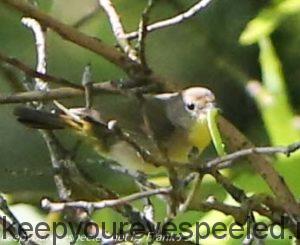 In the treetops I saw a splash of red and saw this pair of scarlet tanagers gathering material for a nest. 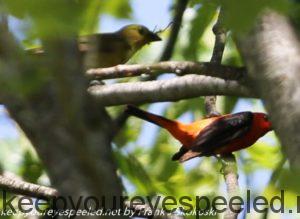 As the June sun warmed the air, cumulus clouds appeared in the clear skies. The breeze picked up too making for a nice hike atop the ridge. Beneath this mountain  is the famous  Jeddo Railroad tunnel .The tunnel was built in the 1850’s. 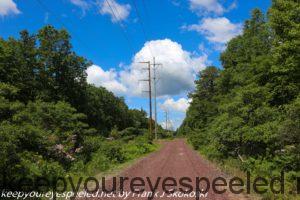 From atop this ridge one can see why Freeland is the highest borough in the  Commonwealth of Pennsylvania. You can see it straddle the mountain in the distance. 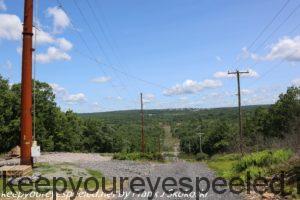 Here is a closer look off one of the main streets.

The start of Summer in our area also is the beginning of  ‘ huckleberry’ season. The first  low bush blueberries usually ripen on the first day of Summer and continue for a few weeks. They are followed by the high-bush blueberries or “swampers”.   Following in the footsteps of my parents and grandparents I have picked thousands of quarts of both. These hills and ridges would have hundreds of children and wives of the coal miners picking this delicious berries to supplement their husbands meager earnings. 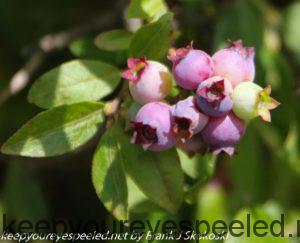 I followed the pole line for about a mile where it intersected with an older pole line. It is being replaced and I followed this new road down to the main, and only, highway, into Hazle Brook. I enjoyed the views of the mountains on the hike down. 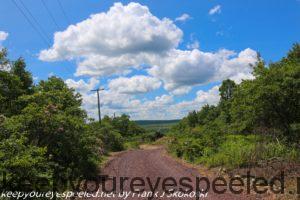 I followed the road into Hazle Brook seeing some butterflies, 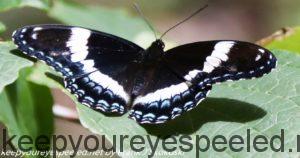 and dragonflies on the way.  I made it into this small town, there are about a half dozen houses, around noon. I completed a large oval track. I am glad I decided to hike into the reclamation lands. It  reminded me of the woods of my childhood. And those memories are always good.  Here is a link to a gallery with some more photographs from my hike. Reclamation area hike June 22 2019 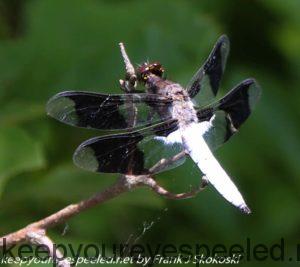 “Ô, Sunlight! The most precious gold to be found on Earth.” 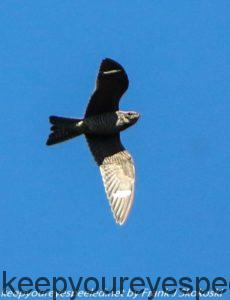