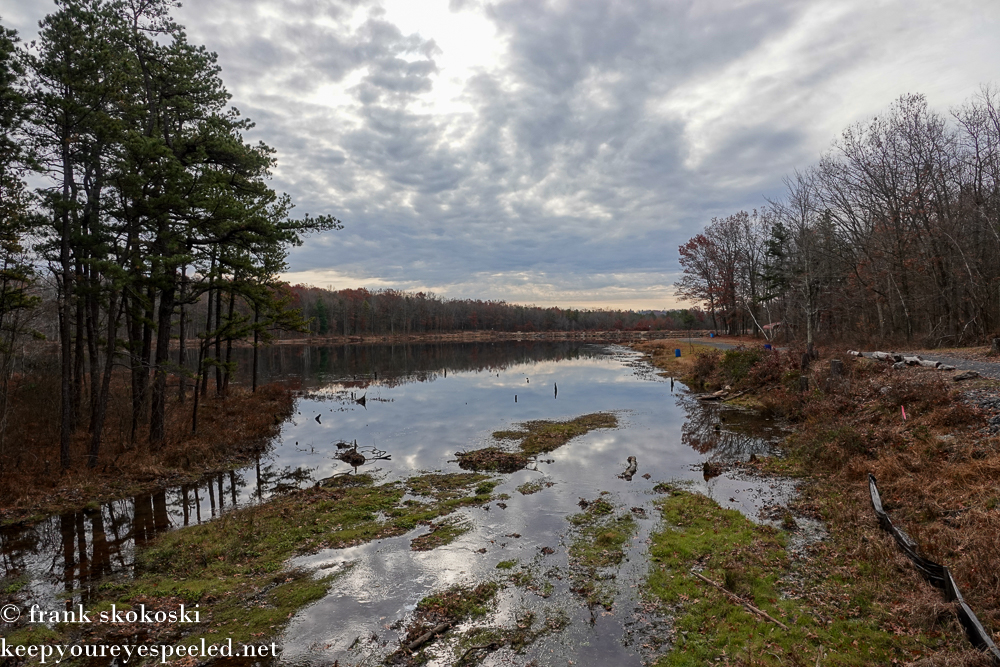 In many  years here in Northeastern Pennsylvania, we have already had plowable snow by late November. This year we have been, in my opinion,  fortunate,  and so far have only had a dusting of snow here at my home in Hazle Township, Luzerne County. However, it is late November and, as  the nights continue to lengthen,  the weather  gets colder.  And I saw the first ice forming  on Lake Irena in the Community Park near my home this past week. 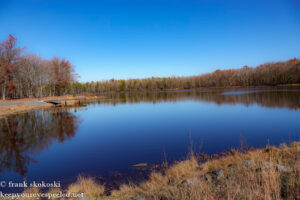 On Wednesday it was a beautiful but cold afternoon when I arrived at the park. Temperatures were in the upper 30’s with a brisk northwesterly wind. The skies were mostly clear and  Lake Irena reflected their blueness.

As I walked along the eastern side of the lake, 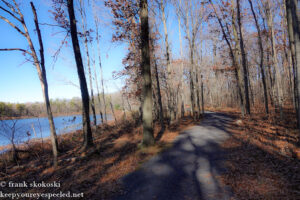 I saw the first ice of the season forming along the shore.  It was thin and only extended a few feet off of the shore but it was a sign of the cold and ice will soon arrive. I am not looking forward to it. 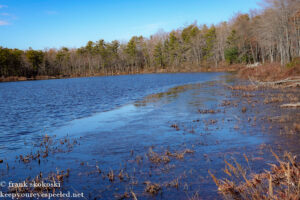 The cold may have already  sent the bufflehead ducks and grebe that I saw on the lake last week on their journey south to warmer parts. I did see the four mallard ducks on the far end of the lake but they flew off as I approached. The only other wildlife I saw on my hike was a  white-breasted nuthatch and 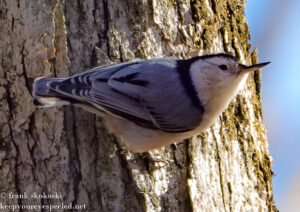 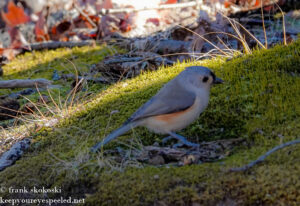 As I observed in my blog post from my previous hikes almost all of the trees have lost their leaves exposing their intricate bear branches,and some of last seasons’ bird nests and wasp or hornet nest were also now visible.

I walked around the lake  under the weak late November sun,

and then took the trail into the woodlands that led to the Hazle Township baseball field. Here some of the old oaks still had their brown leaves clinging to their branches. 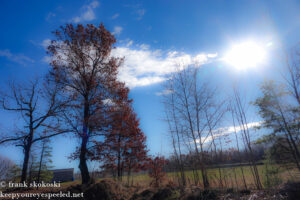 There was also ice on the puddles along the trail. 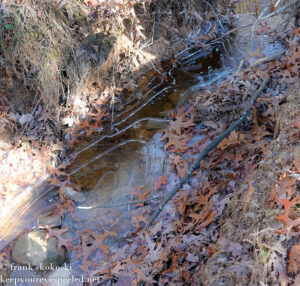 Returning to the lake I noticed some of the  red common winterberries along the path. These berries will probably provide the last vivid colors of the season. 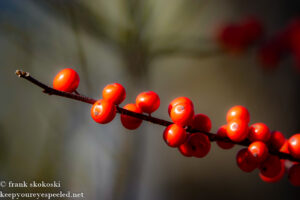 I left the lake that afternoon, but returned early Thanksgiving morning to work up an appetite for the big traditional dinner my niece Cassidy and Kelly and Kelly’s husband Ethan was preparing. It was a much different day.   High clouds obscured the sun and gave the lake a somber  look. The temperature was a little warmer. It was near 40 degrees  which is average in these parts in late November. 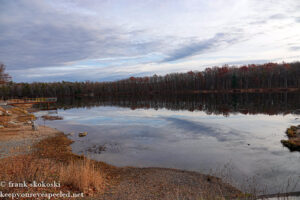 There was no breeze and the still waters of Lake Irena reflected the clouds over the lake and the trees along the shore. 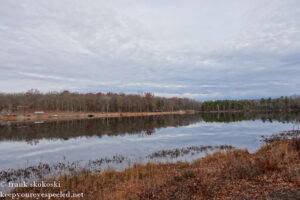 The last of the leaves that clung to the branches of the trees along the lake, and 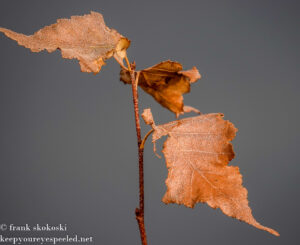 the dead and dried out flowers added to the somber feeling as I walked alone around the lake.  I did not see a single human on my three mile hike. 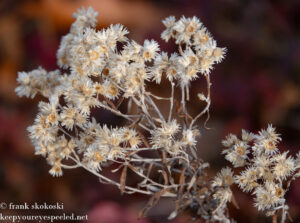 As I walked to the wooded northern end of the lake, 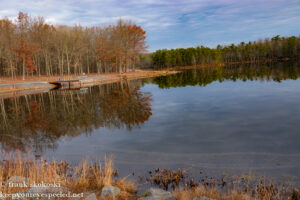 I did see the four mallard ducks that have remained on the lake. 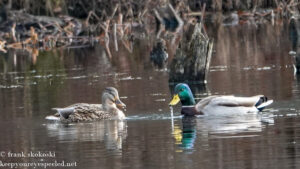 I also saw this  white-breasted nuthatch scampering down a tree trunk, 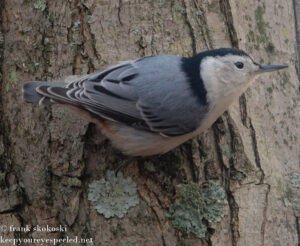 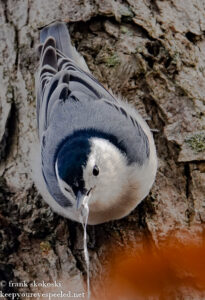 And, finally I was able to get a photograph of the belted kingfisher that I have been seeing and hearing chattering around the lake.  It finally landed on a tree branch on the other side of the lake. It was a good distance from me, and it was overcast, so this was the best photograph I was able to get. It is also heavily cropped but I finally captured this elusive bird. 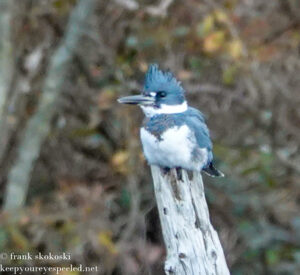 After spending about 15 minutes watching the kingfisher, and hoping it flew closer to me, it flew off and I continued my walk. 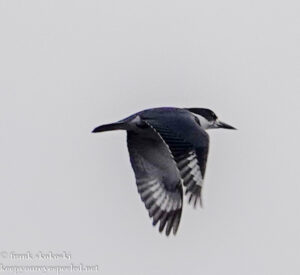 I saw another critter foraging on the forest floor, this gray squirrel. I think it was looking for acorns. 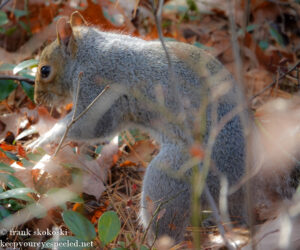 I was finishing a third lap around Lake Irena and still did not see another person, It was nice having the park and lake all to myself.

I did see this Winter visitors for the first time in the park, dark-eyed juncos, or “snow birds”. They will be scampering on our woodland floors until they return to their breeding grounds further north in the Spring. Here is a link to a gallery with some more of the birds I saw on my late November  hikes. Community Park birds November 24-26 2021. 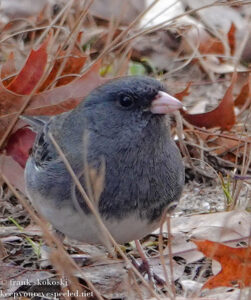 The  changeable November weather changed again on Friday and it was overcast, cold and windy when I arrived at lake  early in the morning. There was one other person walking around the lake and braving the cold. 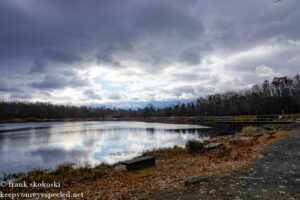 On this three mile hike I did not see, or hear,  a single bird or animal.  Not even a black-capped chickadee or squirrel. 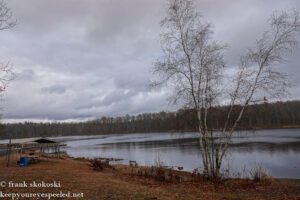 The threatening clouds made for some nice landscape scenery as I briskly walked around the lake. The cloudy skies produced occasional snow flurries and snow  showers  on my walk,, and I am sure they will not be the last we see this Winter. 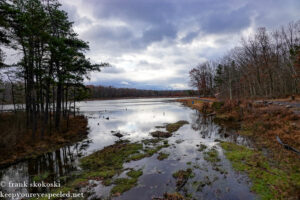 I was a little disappointed I didn’t see any birds or critters on my hike. However, I will have to expect this as the advancing cold and ice force the critters to seek shelter. They will have to feed but it will just be a matter of chance that I am there at their feeding time. Gone are the days of summer where every hike  allows a real opportunity to see, a snake, frog, turtles, many birds,  insects, bears and so many other critters.  Winter is natures bedtime. And I am already waiting for the alarm to go off in March, and nature to awaken with the return of life at  Community Park. Here  is a link to a gallery on my website with more photos from my late November hikes. Community Park  November 24-26 2021. 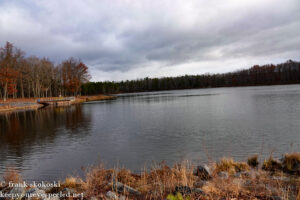 Talk not of sad November, when a day / Of warm, glad sunshine fills the sky of noon, / And a wind, borrowed from some morn of June, / Stirs the brown grasses and the leafless spray.    John Greenleaf Whittier