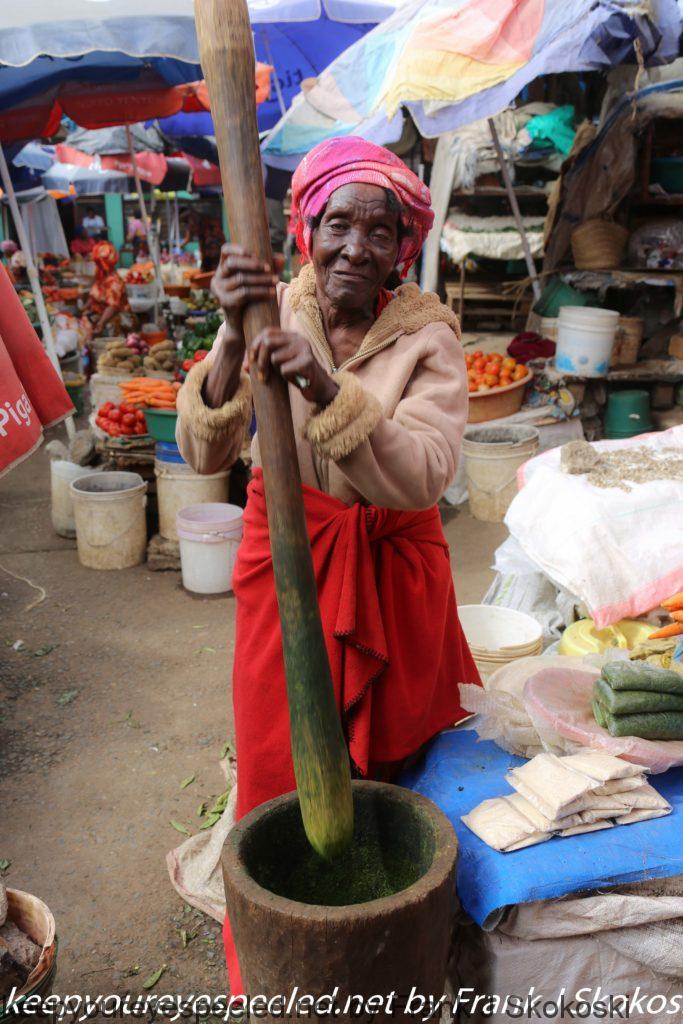 After my short flight to  the Tanzanian mainland , and,  a short wait to obtain my luggage at the quaint Kilimanjaro Airport I stepped outside into the equatorial heat and intense sunshine. Arrangements were made to transport me to the African Tulip Hotel in Arusha.  I was going to meet my travel group for my safari later in the evening. 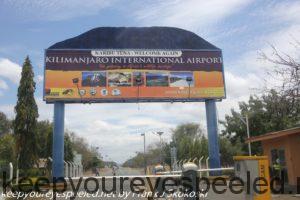 After some searching I  met  up with some members of my group  and located our driver. We began our 40 minute drive from the airport to Arusha  and had a pleasant drive to our hotel. 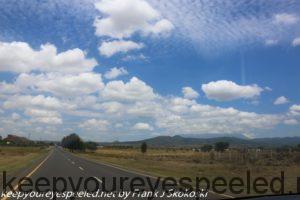 I had driven this route before. I was on a Safari in 2015 but my flight on that adventure arrived late night. I drove the rode in the dark, exhausted after a long day of traveling. This time I got to enjoy the passing scenery of the Tanzanian countryside. At first the countryside was rural. 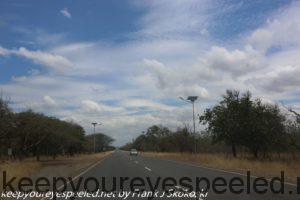 However, as we approached Arusha we encountered the first of many markets we would see that day. 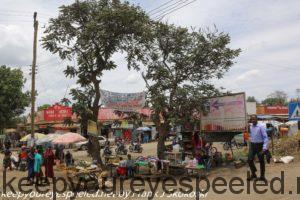 Arusha is situated at the base of Mount Meru  and we could see the mountain as we neared the city. 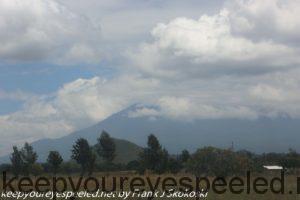 We made our way through the busy traffic of the city and arrived at our hotel in mid-afternoon.  I was surprised to find Elaine, the owner of Mama Kuku Travel, and the organizer of our group greet us, and open the gate to our hotel. I have been on many trips with Elaine, including my first safari in the Serengeti  and was looking forward to another. 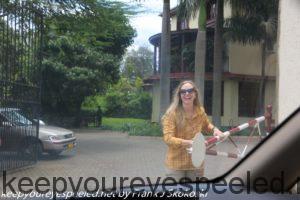 After checking into my room Elaine introduced to some other members of our group.  After some  brief chatting with Elaine and some of our group , I was anxious  to once again explore the city of Arusha. 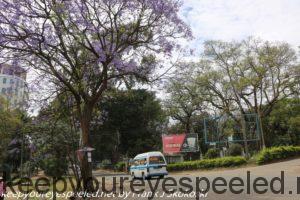 I walked about a mile to the congested downtown of the growing city. Arusha has grown rapidly as a hub for the mushrooming tourism industry to the Tanrangire, Lake Manyara and Serengeti National Parks. 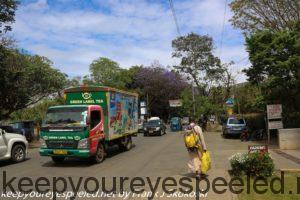 I came to the famous clock tower which the residents of Arusha claim is the midway point between Capetown, South Africa to Cairo, Egypt. However, I have heard that this may not be the case. 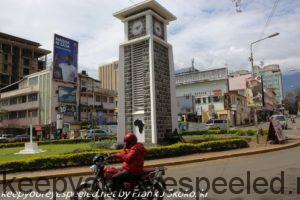 The streets of Arusha were bustling with traffic, both human, motor vehicle and even some animal. 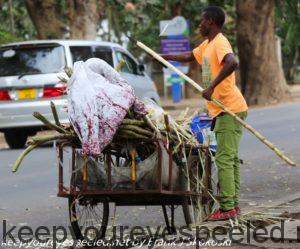 I walked into one of the  native craft market and was greeted by many of the local merchants who wanted to have their  photographs  taken. 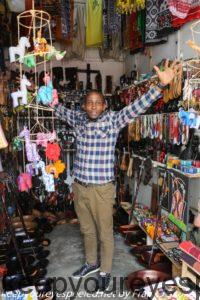 Although we spoke different languages, I was still able to enjoy  my encounters with the native merchants. 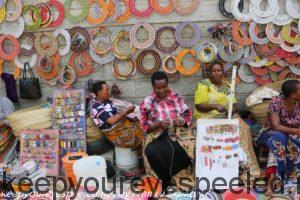 I roamed around the craft market for a while and decided to walk to the larger produce market about another mile from my hotel. 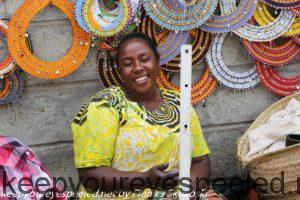 I enjoyed people walking as I made my way through the busy streets of the city. 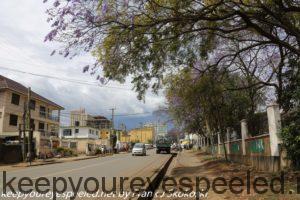 When I saw the large crowds and produce stands I knew I arrived at the market. 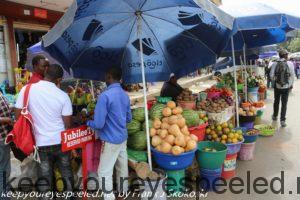 I love exploring markets in foreign countries. You can learn so much about a country and its people and their culture. I enjoy seeing  the local foods they eat. 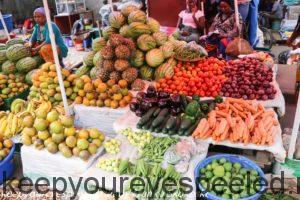 And watching their expressions and personalities , and trying to communicate even though we speak different languages, 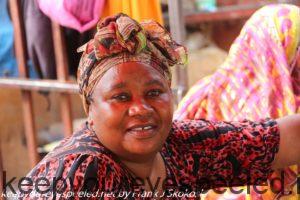 This could be illustrated by a moving encounter I had with this elderly woman. As I walked through the markets some of the merchants did not want to be photographed. I always respect their wishes. Others did. And this woman motioned me over. As I approached to take her photograph she stopped me.

. She walked over to her shawl and headdress and, with great effort,  picked up this grinding stick and posed for this picture. You could see the pride in her face. 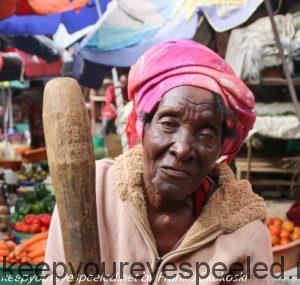 It was a magical moment. The other merchants all watched with emotion to her efforts to show off for this photograph. It is one of the reasons I love to travel. All humans cultures are the same.  We eat, sleep, go to the bathroom. laugh, cry, grow old and die. All of us. So much in common. And yes, there is good and bad in all cultures. I try to find the good. And I did that day in this elderly woman in this market in Arusha. 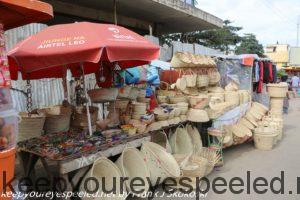 After this encounter I made my way back to the hotel. It was now late afternoon and I settled in my room, showered and worked on editing some photographs. I had an early dinner and then joined my group for our introductory orientation for our safari which would begin in the morning. It was another wonderful day in Africa. This is a link to some more photographs from my walks  in Arusha.  Tanzania Day Six. Afternoon walks October 3 2019. 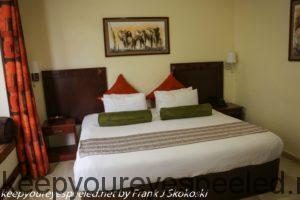 “People of different religions and cultures live side-by-side in almost every part of the world, and most of us have overlapping identities which unite us in very different groups.

We can love what we are, without hating what- and who we are not. We can thrive in our own tradition, even as we learn from others, and come to respect their teachings” — Kofi Annan