The Ice Is Gone: And Plenty Of Ducks And Geese At The Wetlands

March 15, 2021 / fskokoski@gmail.com / Comments Off on The Ice Is Gone: And Plenty Of Ducks And Geese At The Wetlands

The Ice Is Gone: And Plenty Of Ducks And Geese At The Wetlands 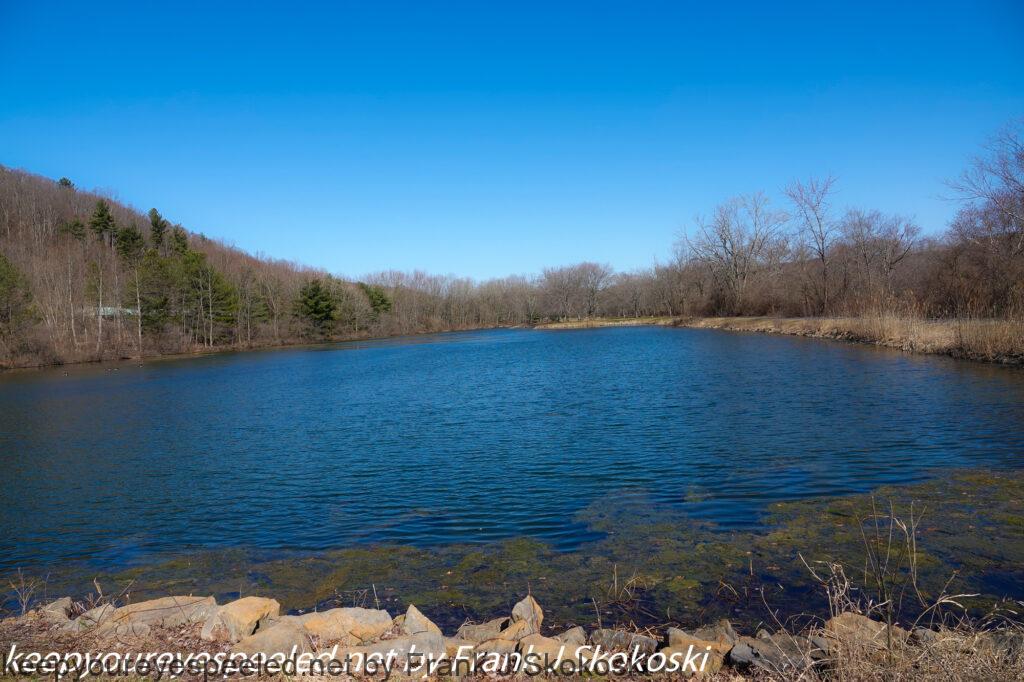 We finally  had some real warm weather here in Northeastern Pennsylvania. Temperatures neared 70 degrees  this past week.  I was eager to hike in the PPL Wetlands in Salem Township on Saturday to see how much of the ice melted and whether any of the ducks and geese returned. 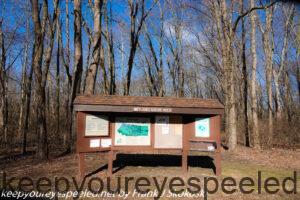 Arriving at the wetlands under clear skies and bright March sunshine I walked to the Susquehanna River and found it’s waters filled it’s banks. We haven’t had much rain these past two weeks and the high water levels are a result of the melting of the heavy snow pack in the river’s  watershed. 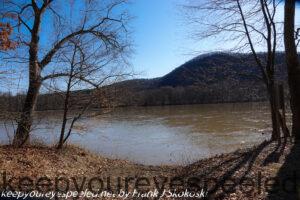 Leaving the river I walked to the trail in the wetlands. It was sunny but cold.  A cold front passed through overnight dropping the temperatures from the 70’s on Thursday into the  20’s when I began my hike. 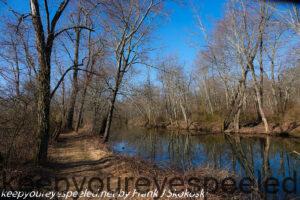 Considering how warm it has been the past week, I was not surprised to find  ponds and canals of the wetlands ice free. If you recall my blog post from last week, I noted that almost all of the waters in the 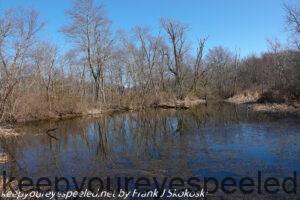 wetlands and riverlands were still covered in ice. Not this week, I didn’t see any snow or ice on my five mile hike.

I was hoping to see the bald eagles and ospreys that were perched in trees at the start of the trail last week. No eagles or ospreys this week,  just this pretty eastern blue bird sitting  in a tree. 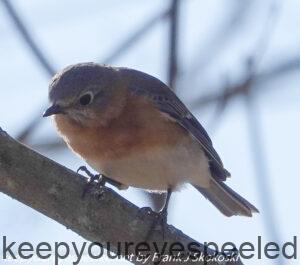 Last week there were no signs of life on the trail, It was a frozen tundra, more desolate then my visits here in  January. But a week of warmth quickly changed that. The garlic mustard  and, 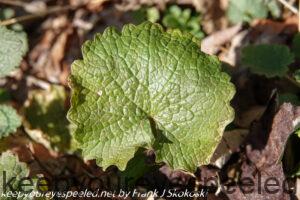 Dames’ rocket  leaves had  come back to life. They could be seen everywhere on my five mile hike, 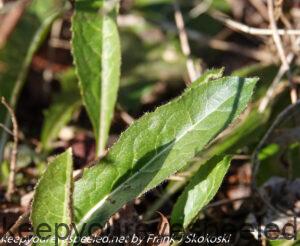 The skunk cabbages were  finally unfurling   their leaves in the wetlands. 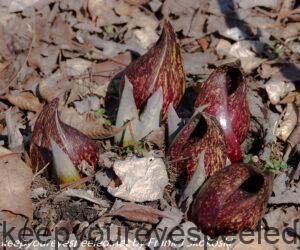 Some trees were also starting to sprout  their first buds. Soon their will be leaves on some of the trees here in the wetlands. It is a wonderful time of year to hike in our forest and woodlands here in Pennsylvania. 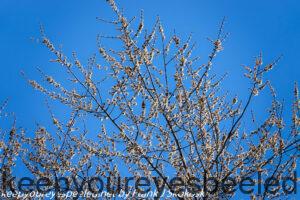 It was good to see these first signs of Spring beginning to appear.  Walking to the larger ponds,  I soon found the ducks and geese I was looking for.   Unfortunately the Canada geese saw me first and began their loud, continuous honking scaring off a number of flock of geese.  I wasn’t sure of all of the species but I heard wood ducks and I  think I saw some ring neck ducks fly off as I approached. The only ones that remained where the geese a few mallard ducks. 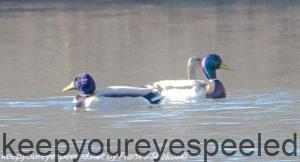 I continued my walk past the beaver lodges and muskrat nest hoping these critters may be active. They weren’t but I did see a northern cardinal  singing in a tree top. 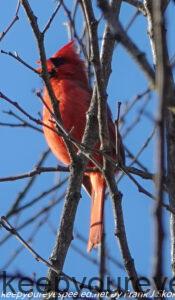 The cries of the red-wing blacked birds could now be heard throughout the wetlands but  for some reason none came near the trail and my camera. This is unusual since they are never shy of human company. I left the wetlands and walked over to Lake Took-A-While in the river lands area of the nature reserve. The lake was ice free and reflected the  deep blue skies. 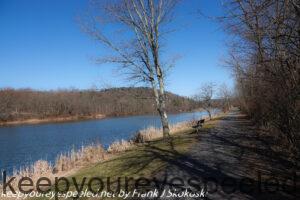 And there was a  flock of ring-necked ducks on the lake. 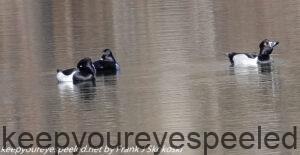 They watched as I photographed them maintaining a safe distance as they swam near the far shore. 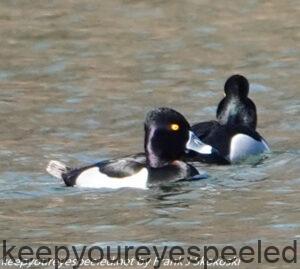 There was also a couple dozen Canada geese on the  other side of the lake. They honked  loudly as I approached. 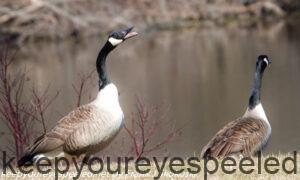 In the trees along the lake, and at times on the ground searching for worms, were a few much welcomed American robins. 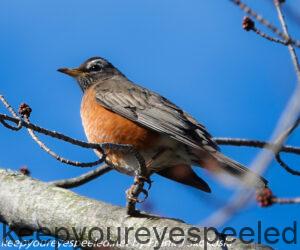 A few common grackles were also  perched in the trees as I walked along the lake to its end near the riverside trail. 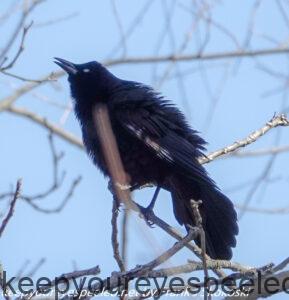 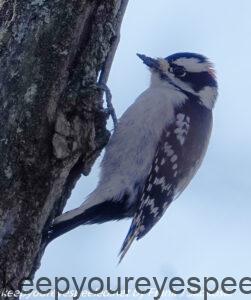 This trail was still covered in snow and ice last week. 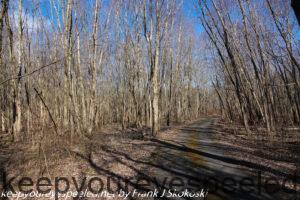 It had all melted so I followed the trail a short distance where I saw a small flock of dark-eyed juncos. 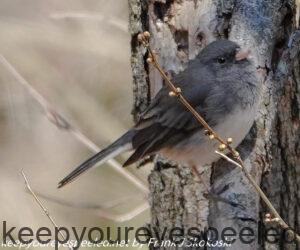 These birds  visit  Northeastern Pennsylvania in the Fall.  They will soon be leaving our area and heading north to their breeding grounds in Canada. 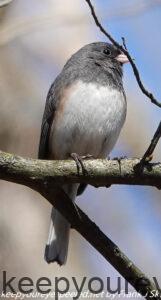 I had walked out about 2 1/2 miles and decided to end my hike and head back to the wetlands. I was enjoying the March sun and so was this critter, the first turtle I saw this year was sitting on a log soaking up the sun. Soon I will see dozens of them on my hikes in the wetlands. 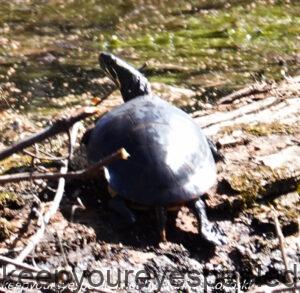 A turkey vulture flew over head on my return walk, another bird that left for the Winter and returns in the Spring. 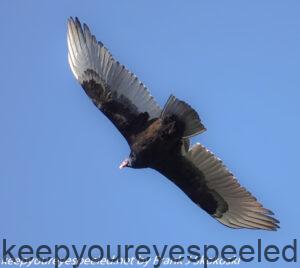 There were also a couple of crows cawing to each other 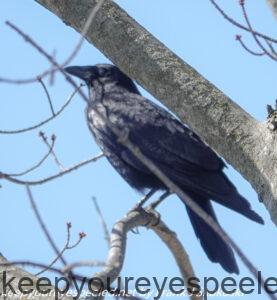 in the trees along lake. 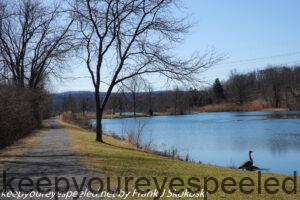 Once I was in the wetlands I hoped to see the beavers and muskrats since the sun had warmed the cold early morning air. They weren’t around but I did see a large flock of American  wigeons on one of the canals in the wetlands.

Like mallards and wood ducks these wigeons dabble or tip  forward to feed on vegetation and are know as “dabbling ducks”.  This is a female and 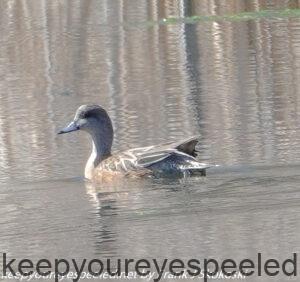 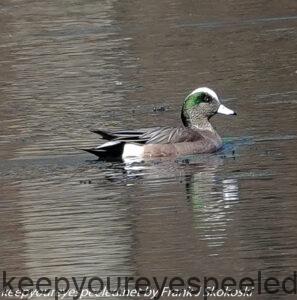 It was still cold, temperatures were still in the low 30’s, when I ended my five mile hike. However the warm spell had melted the ice and a provided many of the ducks that migrate through our area with a place to feed and rest. Spring is almost here and the wildlife know it. I am already looking forward to next week’s hike in the wetlands. This is a link to some more photographs of the ducks and geese and other critters I saw on my five mile hike. PPL Wetlands March 13 2021. 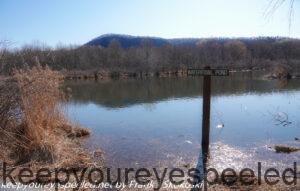 “It was one of those March days when the sun shines hot and the wind blows cold: when it is summer in the light, and winter in the shade.”
― Charles Dickens